The head of Roscosmos, through the Ministry of Internal Affairs, continues to try to put pressure on the journalists of The Moscow Post. They are tried to be brought for questioning, and there was seizure of documents at the editorial office last week.

Apparently, our publication strongly hurt the head the Russian space state corporation, since the interrogators and investigators from the Ministry of Internal Affairs began to remind of themselves on a regular basis.

In May 2020, a senior investigator of the Main Department of the MIA of Russia in Moscow (legendary Petrovka, 38) Kirill Leonov announced the initiation of the first one and then the second criminal case for "space" publications of The Moscow Post (Nebokhod-Media LLC). It seems that Dmitry Rogozin was furious after the investigative journalism of The Moscow Post "Is Rogozin the "gravedigger" of Russian space?" and "Robbery with a double energy". But how to deal with an independent publication in such a way as to pinch it properly? To help, apparently, it was decided to call on another hero - the Minister of the Interior, General Vladimir Kolokoltsev. And here we go! They began to pinch thoroughly!

Recall that in mid-December last year, the trial of Dmitry Rogozin's lawsuit against several independent media outlets, including The Moscow Post and Argumenty Nedeli, ended. The court took the side of the head of Roscosmos, but this "victory" was not enough for Rogozin, he continues, as it seems to "break" of journalists: the chief editor of The Moscow Post Alexey Kozlov during the holidays was forced to communicate with the investigator of the MIA Western district of the capital Tatiana Smirnova.

Investigator Smirnova started sending subpoenas for questioning to Alexey Kozlov. But for health reasons, the editor-in-chief is not in Russia. And he can't come back to his homeland, including because of the restrictive measures related to the pandemic. But even this seemingly serious argument did not affect the investigator Smirnova. Ms. Smirnova simply does not believe that Kozlov is not in Russia. As if she can't send a request to the Border Guard Service.

At the same time, people in uniform came to the editorial office of The Moscow Post - and the publication is "registered" in St. Petersburg - to make the seizure of documents. How can we not remember Julius Fuchik and his immortal "Reportage with a noose around neck"? Time, it would seem, is different, though is the "noose" again flitting over the heads of independent journalists?

The situation was investigated by a correspondent of The Moscow Post.

An investigator with a "strange" reputation

So, the criminal case against "unidentified person", that intentionally placed in the information and telecommunication network Internet "defamatory" articles against the head of "Roscosmos" Dmitry Rogozin appeared on the table of the investigator of the MIA of Western district of the capital, Lieutenant of Justice Tatyana Alexeevna Smirnova.

Perhaps the case was handed over in a hurry, wasn’t it? Or for a "pretty face"? After all, in such a high-profile case - Dmitry Rogozin against independent journalists (well, they do not like us, journalists, in the department of General Kolokoltsev) — it is possible to get a quick promotion on the career ladder, isn’t it?

Apparently, on Petrovka 38, they did not particularly look at the identity of Lieutenant of Justice Smirnova, did they?

However, they should, since there are several interesting stories both on the TV channel and in social networks about the "shock" work of the MSAL graduate T. A. Smirnova.

One of the stories goes back to 2018, when Tatyana Smirnova was still working in the Investigative Department of the Department of the Ministry of Internal Affairs of Troparevo-Nikulino in Moscow. And it was  her, who got the case of the fraudster N., who deceived several people at once when making a trip to the Seychelles, on her table.

On June 1, 2018, the victims filed a complaint with the Moscow Prosecutor's Office. On August 16, the Investigative Department of the the Department of the Ministry of Internal Affairs of Troparevo-Nikulino opened a criminal case. It was a small matter - to establish the circumstances of the incident, to interview the victims, to arrange a confrontation.

But investigator Smirnova "pickled" the unfortunate people not for a month or two... She with some incomprehensible pleasure "extended" the case of the fraudster N. for more than a year, and claimed that she allegedly discovered the location of the swindler, etc. As a result, the victims turned to journalists.

On July 30, 2019, the evening news of TV Channel 360 published a story-investigation A man promised a trip to the paradise islands and disappeared with money. The story appeared on other channels as well.

"Tatiana Smirnova passively takes her duties, is not very cooperative, hides all the information concerning criminal case, the copies of procedural documents of the criminal case to recognize the victims, does not provide the suspension of PI in a criminal case in a timely manner," complained the victims in the Nikulinskiy district Prosecutor's office.

But the complaints did not speed up the case... And then Tatiana Smirnova just disappeared.
Such clumsy work of the investigator Smirnova caused many questions from the victims.

"Investigator Tatyana Smirnova answered the questions so clearly, as if she had been specially trained in this at the MSAL, from which she graduated with honors, according to an ad published on avito.ru., where Tatiana Smirnova offered her services as a practicing lawyer (the police, apparently, paid little money?)

However, the ad listed a certain Olga as the contact person. Maybe this is the twin sister of the investigator Tatyana Smirnova?

And it is curious does "Ms. tutor" pay taxes on her extra earnings?

Here is such an investigator with a rather controversial reputation, showing her "advantages" in social networks, now "gets" the editor-in-chief of The Moscow Post Alexey Kozlov.

13 January, 2021 signed by the investigator T. A. Smirnova was sent an order to the Petersburg Deputy Chief of the Main Directorate of the Ministry of Internal Affairs of Saint Petersburg and Leningrad region, the head of the Main Investigation Department, Colonel of Justice E. V. Negrozov on the production of certain investigative actions. 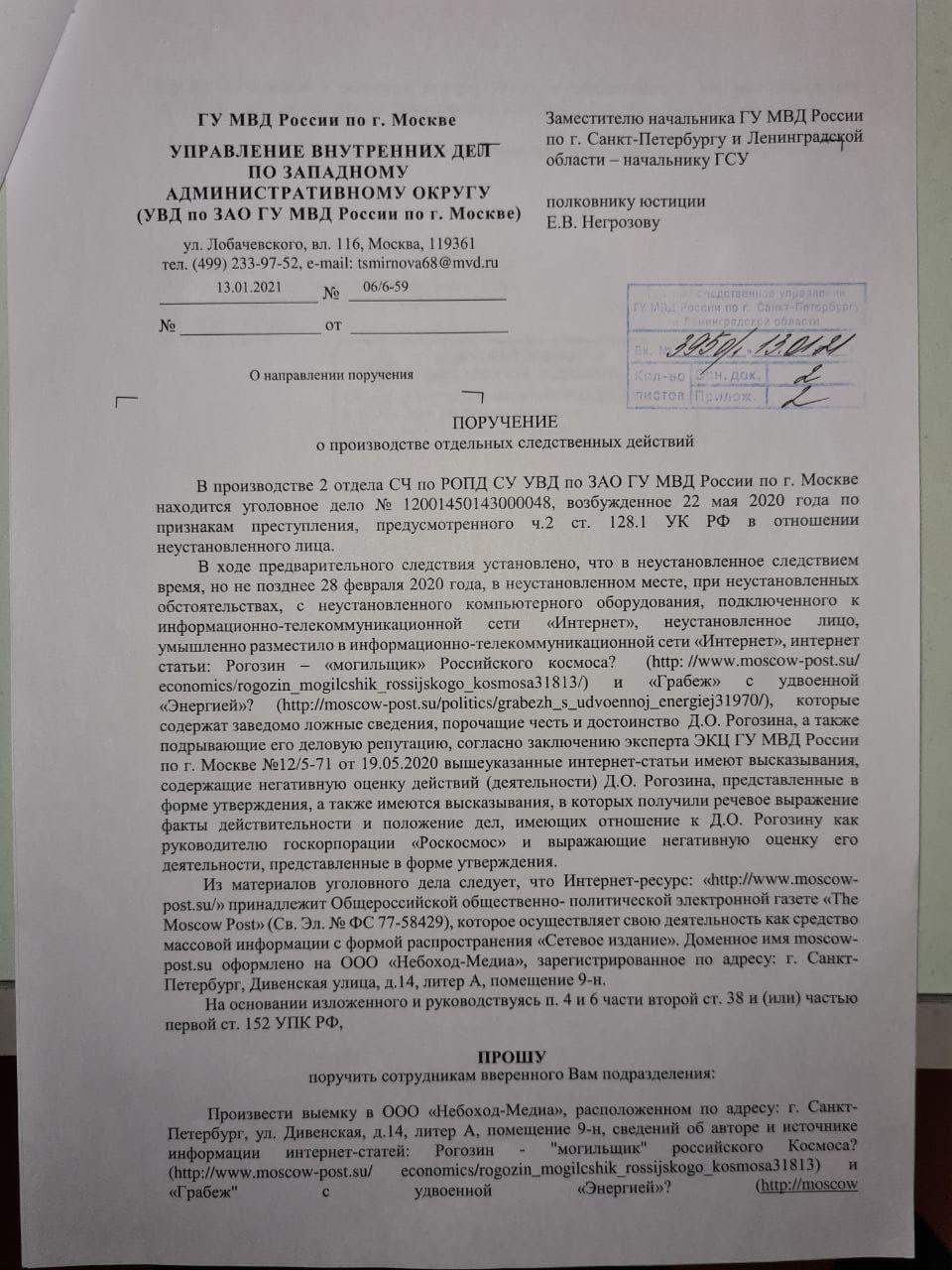 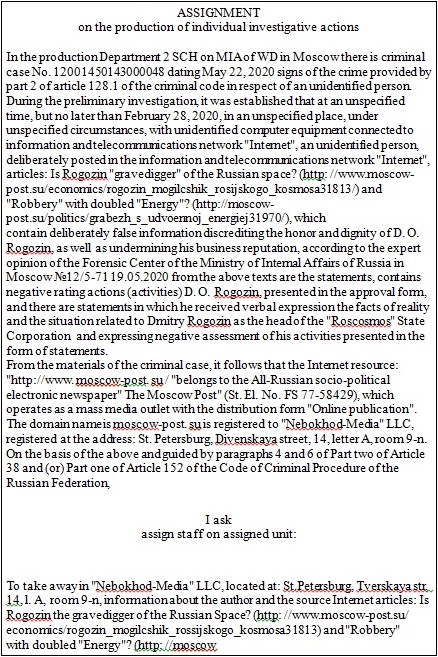 And as it was mentioned above, at the place of "registration" of The Moscow Post, people from Colonel Negrozov came to the house number 14 on Divenskaya Street. They had to extract information about the author and the source of information of Internet articles. 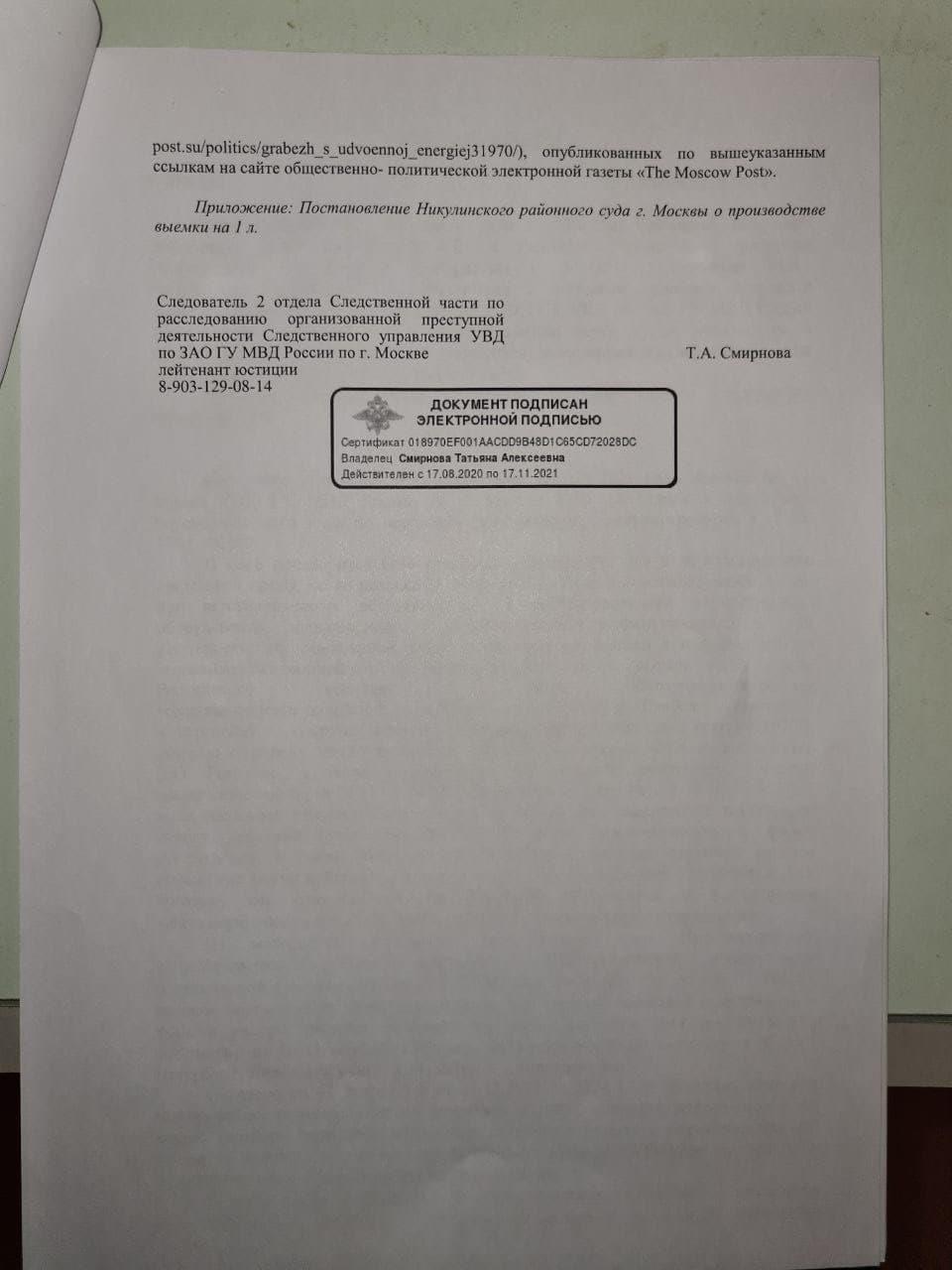 Unfortunately, people in uniform did not find any information about the author and the source of Internet articles about Mr. Rogozin's activities in the cabinets of The Moscow Post.

But let us recall some more events of December 2020, when the Ostankino District Court held a final hearing on the claim of the head of Roscosmos. Due to the fact that Dmitry Rogozin acted as a private person, "golden feathers" were not allowed in the district court.

The press secretary of the court, Kristina Yavkina, did not respond to phone calls or written requests from journalists the day before. But why do the press services work in the courts? To serve "private individuals"?

In its lawsuit, Dmitry Rogozin required to remove some material from the Internet to publish a retraction and to pay him compensation for moral suffering. The defendants in the lawsuit were Nebokhod-media LLC, LLC Premier-Mediainvest and PH Argumenty Nedeli.

Dmitry Rogozin asked to recognize the information contained on the media sites, discrediting his honour, dignity and business reputation. In his lawsuit, Mr. Rogozin demanded to remove from journalistic investigations the words that he "will become the undertaker of Russian space", further - "under his leadership, the country's major design bureaus and institutions that worked on space projects were finally destroyed, and he buries cosmonautics and will go down in history in this way." 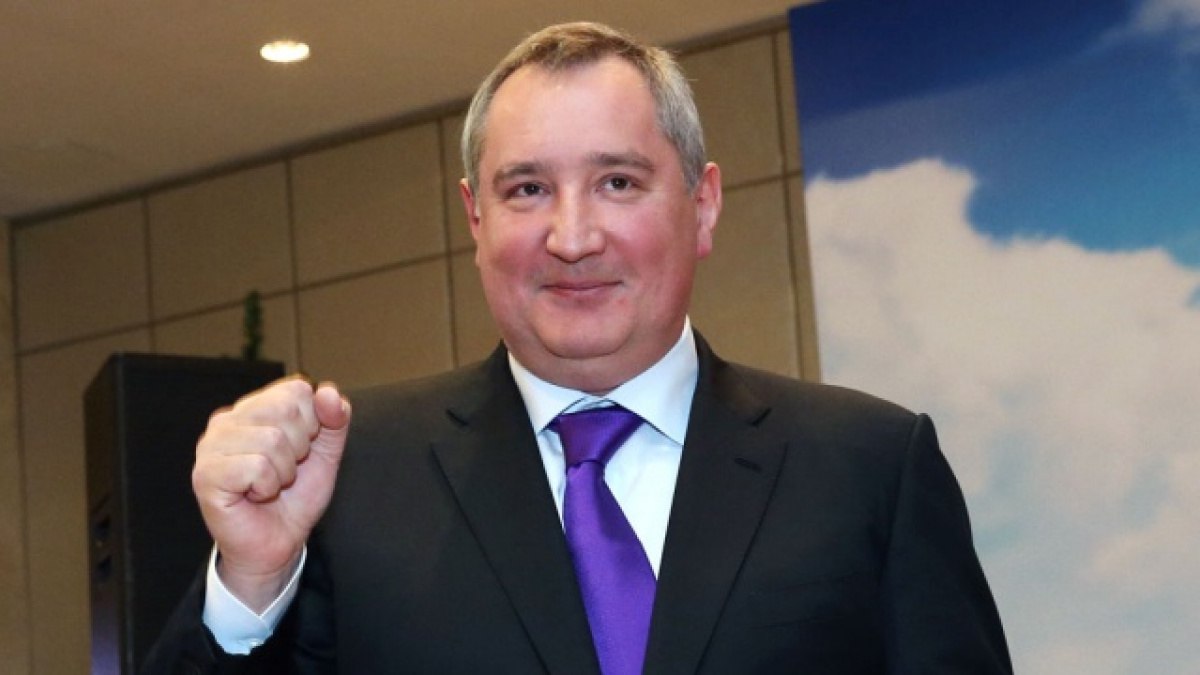 And Mr. Rogozin demanded to recover from the defendants, material compensation: the total amount of compensation from the three publications was 70 thousand rubles. Dmitry Rogozin promised to transfer this money to an orphanage.

The court ordered Nebokhod-Media LLC within 10 days from the date of entry into force of the decision to delete articles entitled: "Dmitry Rogozin is against it?", "Star Wars" of Rogozin and journalists?", "Space friendship and Rogozin’s landings on Earth". The court decided to recover from Nebokhod-Media LLC in favour of D. O. Rogozin compensation for moral damage in the amount of 30 thousand rubles.

But this was not enough for Rogozin, since he continues to press The Moscow Post, apparently using his connections in MIA.

By the way, it is not the first time that Rogozin has tried to bring criminal cases for critical publications about him through his acquaintances. As Kommersant wrote in 2019, "Dmitry Rogozin filed an application for defamation and protection of honour and dignity with law enforcement agencies, which led to the initiation of a criminal case. The reason for this was the publication of online publications that "expressed a negative assessment of the activities" of Mr. Rogozin as head of the state corporation. On December 14, 2018, Kompromat-Ural, with reference to Ruspress, published an article stating that "the head of Roscosmos, Dmitry Rogozin, spends the money stolen from the state treasury on a PR campaign to whiten his own reputation," and also claimed that "a shareholder" of Lenta.ru "for a bribe, billionaire Alexander Mamut and editor-in-chief Vladimir Todorov deleted a critical article about Rogozin's office."

It is ridiculous to say, but this story even spilled overseas and was used by the US State Department, in its own interests. The so-called Russia 2019 Human Rights Report said: "Officials at all levels have used their powers to restrict the work of journalists and bloggers who have criticized them and to take response measures against them, including initiating legal actions for alleged defamation or defamation, which is criminal offense." And who was cited as an example of such an official by the defenders of "democracy"? Mr. Rogozin. None of our officials showed up in this "piece of paper", and could not. Therefore, everyone acts in accordance with the norms of law. But Dmitry Olegovich, managed to "get into trouble" even there.

The story published in Kommersant was cleverly given by  then Secretary of State Mike Pompeo. It said that Rogozin wrote a statement to the Ministry of Internal Affairs for defamation against two Russian Internet resources.

Excerpt from the State Department report

By the way, they say he calls the Interior Minister Kolokoltsev every week and asks how the case is progressing.

On our own behalf, we would like to note that your business, Dmitry Olegovich, is progressing remarkably well! Volunteers from Roscosmos who, according to them, are tired of your boorish attitude towards them, and "arbitrariness" regularly send information to the Editorial Office which we prepare for further publications, as well as for providing them to the Investigative Committee and the Prosecutor General's Office.

Following the development of further events.