Federal Agency for Tourism shifts the responsibility for the distribution of budget funds for state contracts to a private company, which may be associated with the governor of the Moscow region Andrey Vorobyov.

According to the correspondent of The Moscow Post, the Federal Antimonopoly Service initiated a case against Federal Agency for Tourism on the grounds of violation of antimonopoly legislation in the distribution of grants. Apparently, that is why the agency recently hired a contractor to search for contractors - now the company Stroykom-97 will perform separate functions to determine the supplier. Among its co-owners is a native of the Directorate of the single customer of the Ministry of Health of the Moscow Region, who may probably be associated with the local governor Andrey Vorobyov. But what is even more interesting, Stroykom-97 worked with Glavstroy when it was still part of the oligarch  Oleg Deripaska's holding Basic Element, and the billionaire's partner was the brother of the head of the Moscow region Maxim Vorobyov. It turns out that the Vorobyovs worked for many years with the firm, and presumably unable they can still do this. Will the contracts of Federal Agency for Tourism be distributed by an office that can act in the interests of the governor's family?

The contract between Federal Agency for Tourism and Stroykom-97 was signed on January 11, 2020. According to the public procurement website, for almost 3 million rubles until the end of 2021, the office will provide services to a specialized organization to perform certain functions to determine the supplier (contractor). In other words, it is Stroykom-97 that will now determine where and to whom the state funds from the Federal Tourism Agency will be sent.

At the same time, Stroykom-97 has previously cooperated with Federal Agency for Tourism - provided it with similar services throughout the second half of 2020. Just when there was a scandalous distribution of grants, which now attracted the attention of the FAS.

According to the official website of the company, it has been working on the tender market since 1997. However, for a company with such a rich history, there is somehow suspiciously little information about it in open sources. And all these facts are not in favour for of the company’s image.

So, back in 2009, a note appeared on the website of the Communist Party of the Russian Federation, which tells how the Institute of Theory and History of Pedagogy (part of the Russian Academy of Education) sold the object belonging to it on the rights of operational management, Stroykom-97. Moreover, it is claimed that the auction was held "on the sly", and gave the object at a low price, thereby causing damage to the federal budget. But in such cases, there is always a suspicion that this was not done spontaneously and for a certain fee. Did Stroykom-97 "lit up" in the "kickback" history?

Detractors also accused the office of dumping prices at the auction. This follows from the text of the presentation of a certain user on the Myshared website, according to which in 2011, Stroykom-97 reduced the contract price by 10.5 times within 47 minutes - from more than 2 million rubles to 178 thousand.  Wasn’t anyone confused by anything?

Does it seem, or in Stroykom-97 can carry out purchases, using some "schems"? It is also interesting to see who is behind the company. So, the founders are Vitaly Abramov and Viktor Sovetov. The latter in 2014-2015 headed the Directorate of the single customer of the Ministry of Health of the Moscow region. According to the Rusprofile the Department concluded 363 of the contract under Sovetov - are they all transparent?

It turns out that he controlled the medical procurement of the Sovetov under the governor Andrey Vorobyov, the then Minister of Regional Health was Nina Suslonova. Now the latter works as an adviser to the head of the Moscow region, which means that through her Sovetov could become even closer to Vorobyov, couldn’t he?

By the way, under Suslonova, the medical sector of the region was shaken by scandals. So, in 2016-2017, it was planned to allocate 289 million rubles for the overhaul of healthcare institutions, and another 315 million rubles were to be spent on the purchase of necessary equipment. However, the ministry received only 24 million rubles. Because of this, Odintsovo Central Regional Clinic has not got the promised fluorograph, which broke down six months ago. As a result, 150 thousand residents of the district were deprived of their constitutional right to medical care, Obshchaya Gazeta reported.

But the management of the medical institution warned the minister about the possible breakage of the fluorograph more than once, but for some reason she ignored these "bells". Then the spiteful critics assured that Suslonov was more concerned with the distribution of contracts of the ministry's subsidiaries, of which there were more than a hundred. They say that the official could take "kickbacks" from firms, although no one caught her by the hand. Mr. Sovetov was then engaged in the interaction with suppliers in the field of health care.

What if, in this position, Sovetov was able to establish himself as the "right" partner, which is why Governor Vorobyov can continue to use his services, despite the fact that officially Sovetov no longer works in the state structure? In this case, it is quite possible that the head of the Moscow region "looked" at the tourist money.

Moreover, the governor's brother Maxim Vorobyov also has experience working with Sovetov and Abramov. The fact is that Stroykom-97 has a subsidiary -JSC IC Settlement and Financial Center, liquidated in 2017, which is co-founded by JSC Glavstroy. The last company, which was previously part of the holding Basic Element of Oleg Deripaska, and his partner in the construction business was just the same Maxim Vorobyov. It turns out that two experts in the field of procurement - Sovetov and Abramov - had a common business with Vorobyov and an influential oligarch for many years, ddn’t they? 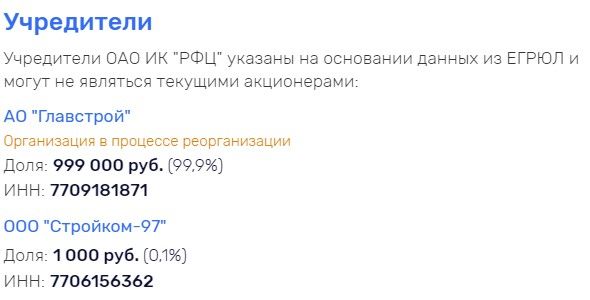 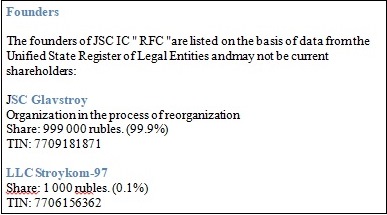 Glavstroy was noted for the construction of Olympic facilities in Sochi. Deripaska invested 45 billion rubles in  them, as well as in the reconstruction of the Sochi airfield (35 billion rubles of which he borrowed from VEB.RF). As Forbes wrote, the ex-managers of Glavstroy admit that the economic side of the projects was not always taken into account when preparing for the Olympics — after all, it was a construction site of national significance, and Deripaska personally promised President Vladimir Putin to deliver the objects on time and in the best possible way. In 2016, VEB met Deripaska and other "Olympic" investors halfway and extended their loans for 25 years at a rate of 2.5% per annum.

Ultimately, in 2018, Deripaska got rid of the asset and it was transferred to Libra Holdings. Among the founders of the latter is Arkady Sarkisyan, who is part of Deripaska's inner circle - during the "aluminum wars" in the 90s, Sarkisyan headed the security service of the oligarch. Does it mean that Deripaska could have transferred his construction assets to trusted persons in order to protect his development business?

And here it seems not at all accidental that JSC IC Settlement and Financial Center was liquidated shortly before the sale of Glavstroy. Perhaps the company existed for certain purposes - for example, for the "development" of the "Olympic" millions? In this case, the owners of Stroykom-97 may have very specific work experience.

So it turns out that the little-known owners of Stroykom-97 could have access to millions through the governor of the Moscow region, his brother and a prominent oligarch. Can the Vorobyovs work with the office now? In this case, they will distribute the budget funds from the Federal Agency for Tourism.