Probably the existing conflict between the odious businessman Iskander Makhmudov and the deputy Gleb Khorom (Khor - last name of a person) may jeopardize the parliamentary career of the latter.

According to the correspondent of The Moscow Post, following the results of the completed congress of United Russia, the current State Duma deputy Gleb Khor, whom some consider to be a representative of the so-called "coal lobby," was included in the regional group of the party's electoral list in the Saratov region. Moreover, the parliamentarian himself can actively engage in this business, acting through his alleged wife Natalia Khor and father Jacob Khor. The latter is a co-founder of Rutek, producing coal on the scandalous Arshanovsky Section. At this facility, the interests of the Khor and a businessman with an ambiguous reputation of Iskander Makhmudov could face. And, judging by the appearance in the network of many materials exposing the deputy, their struggle can be in an active phase.

In the State Duma, Mr. Choir has already served four convocations - in parliament he "registered" back in 2003. And all this time he can actively engage in business. It is known that before joining the State Duma, he worked at the Geopolis insurance joint-stock company as deputy general director. According to Rusprofail, it has contracts for more than 3 million rubles, collaborating with coal enterprises. But the lobbyist of the coal industry is considered to be the deputy of the Choir.

The head of Geopolis, Vladimir Chkhaidze, also acts as the founder of IK Gorod, whose former owner was Natalya Khor, presumably the wife of a parliamentarian.

Between Natalya Khor and Mr. Chkhaidze, the connection is also traced through the general director of Gorod IC Yevgeny Zaitsev, who runs the DAN IFK, where Ms. Khor is recorded in the founders and... the parliamentarian himself! It is worth noting that the share of the latter is not in trust, and it is generally forbidden for a State Duma deputy to engage in entrepreneurial activities. But no one, apparently, is embarrassed. For the time being?

After all, it seems that now details continue to be revealed about the likely business empire of Gleb Choir, who can engage in commerce both through the namesake (and most likely a relative) Natalya Choir, and through his father Jacob Choir. The fact that the latter is unlikely to conduct business on his own is willingly believed: according to the authors of the Referee telegram channel, allegedly Yakov Khor is now more than 90 years old, which does not prevent him from being a very successful merchant.

Yakov Khor owns half of Rutek LLC, which has revenue of 12 billion rubles and a profit of 253 million. The company also has an impressive volume of state contracts - more than 667 million rubles.

Rutek produces coal on the infamous Arshanovsky Cut. Why is it sad? According to Chance, in 2012-2013, public hearings were held, at which the leadership of the Republic of Khakassia publicly promised that without fulfilling all the environmental requirements of the project, not a single shovel of coal would be removed from the ground. However, at the moment, production is already estimated at millions of tons, and the implementation of design decisions in the section on environmental protection remains in the project.

The co-founder of Rutek is Andrei Lunev, who, together with his father Vladimir Lunev, are officially the beneficiaries of Rez Arshanovsky. It is known that the Lunevs originally from the Lugansk region and in Russia intensified after well-known events in Kiev. However, why did they choose Khakassia, and not a region closer to their homeland? 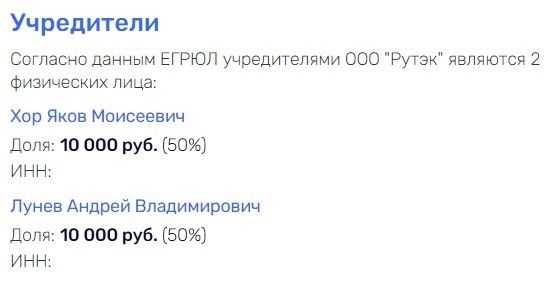 It is possible that the Lunevs are the "people" of Gleb Choir. In this case, now the parliamentarian may try to strike through them. According to the website of the Arbitration Court of the Republic of Khakassia, a certain Alexei Postrigailo on behalf of Rez Arshanovsky LLC filed a lawsuit against Lunev to recover 5 billion rubles in damages. At the same time, the alleged theft in the section from 2015 to 2017. And they were allegedly carried out with the help of the very "Rutek."

However, a logical question arises - who is Alexey Postrigailo and what does he have to do with the cut? In the coal industry, he is well known, is the founder of OOO Ore Khakassia, where in this status he replaced Alexander Kleshnya. Kleshnya established the enterprise in 2013, taking its Khakass assets from Eurasruda: Abakansky Mine LLC, Teisky Mine LLC, Mundybash Enrichment Plant, and Teisky Power Networks LLC and Abaza-Energo LLC. A year later, Kleshnya began working in the Ministry of Industry and Natural Resources of the government of the republic under the leadership of the scandalous entrepreneur Boris Varshavsky, who was arrested for multibillion-dollar theft and tax evasion, as Kommersant reported.

After Kleshni, Alexander Borodaev became the owner of a 99% stake in Ore Khakassia, but how the asset passed to Postrigailo is not very clear. According to some information, in Khakassia he can represent the interests of partners Iskander Makhmudov and Andrei Bokarev, who own Kuzbassrazrezugl. Entrepreneurs previously also owned EkoTehStroy Vladimir, in which Postrigailo was the general director.

In this case, it turns out that it was Mahmudov and Bokarev who could go against the Choir. By the way, the connection between the parliamentarian and businessmen can be traced through the former governor of the Kemerovo region Aman Tuleyev. Makhmudov was considered an approximate of the latter, and Gleb Khor was friendly with the adviser to the ex-head of the region Andrei Makarov.

But, as they say, friendship is friendship, and the coal business and specifically the Arshanovsky Cut is interesting to many. Makhmudov can be a very dangerous opponent - rumors connect him with the Izmailovskaya organized crime group.

And squeezing out of the incision of Jacob Khor can be easy also because it is known that the incision took loans from Rutek, Hong Kong Rutek Ltd and Natalia Khor for financing.

In addition, the Choir could not so long ago lose an influential partner - Dmitry Bosov, who died last year. Earlier, The Moscow Post spoke in detail about the alleged general business of the Choir, Bosov and the now disgraced ex-minister Mikhail Abyzov, who could be engaged in Vostokugl together. The fact is that Bosov was a co-founder of the now liquidated Vostokugol Criminal Code, along with Andrei Lunev, already familiar to us.

However, the Choir may retain other useful connections. So, Natalya Khor, together with Alexei Kozak, the son of the deputy head of the Presidential Administration Dmitry Kozak, owns the YVA company.

It is very similar to the fact that we are seeing a very confusing plexus of business interests of the two most influential people in the coal industry - Gleb Khor and Iskander Makhmudov. Who turns out to be the winner in the proposed fight?