"City Invest Bank" for "their" and Lysyakova

The Moscow Post continues to investigate the activities of former politician Alexei Lysyakov.

How could ex-State Duma deputy and former senator Alexei Lysyakov, thanks to City Invest Bank close to him, gain control over many enterprises?

As The Moscow Post has already written, Lysyakov, forgotten by many and Infaprim close to him, reconstructs a dry milk mixture plant in Istra near Moscow for 3.8 billion rubles. At one time, the process of gaining control of Infaprim by Lysyakov was accompanied by the bankruptcy of the enterprise, as well as a criminal case against its previous owner, the former deputy head of the Ministry of Agriculture, Georgy Sazhin. And it seems that the former parliamentarian developed a whole scheme for obtaining companies that could deliberately bankrupt. And not the last role in this was played by City Invest Bank Leonid Shorsher and Sergey Kamzin, in which Lysyakov literally kept "100 kg of money," and now the structure will bankrupt the ex-deputy personally. By the way, one of the minority shareholders of the bank is actively trying to prevent the latter case. Is it not because he knows that now the former senator is banally withdrawing money from a financial institution?

The name of Mr. Lysyakov rarely appears in the news - he was so "actively" involved in politics, from 2002 to 2016 sitting in different houses of parliament, which, for example, for 4 years in the State Duma has never participated in plenary meetings. What he was then. sorry, did you do it?

The answer to this question may lie in the resonant history of 2015, when security forces suddenly discovered about $7 million belonging to Lysyakov at City Invest Bank. It was reported that then the institution had to be stormed: FSB special forces provided access to it to investigators of the Investigative Committee, who were conducting a criminal case of abuse of authority and wanted to receive financial documents from the bank, Kommersant wrote.

However, they found something more interesting: several sealed cash boxes, which were transferred to Lysyakov Bank for storage as "value." In other words, they were not stored in bank bins and were not declared. It is unlikely that the current State Duma deputy would entrust his blood to the first bank caught?

But Lysyakov's connection with a financial institution can be traced to this day: it is City Invest Bank that is now actively bankruptcy him. The story began with the fact that the ex-parliamentarian was charged with the recovery of more than 325 million rubles, the guarantor and pledgor of which is Porechye LLC, as follows from the file cabinet of arbitration cases. Later, the Cypriot Demaris Holding Korp and the same City Invest Bank joined the number of creditors.

However, in March of this year, City Invest Consalt tried through the court to challenge the decision to declare Lysyakov bankrupt, but was refused - no ties were established between the former deputies and the organization. But, if you carefully look, this connection is: through the chain of companies "City Invest Consult" belongs to a certain Nikanorova Marina Yurievna, she owns 3.43% in the City Invest Bank itself. The following situation emerges: a minority shareholder of a financial institution may try to interfere with the bankruptcy process of Lysyakov. This can be done out of a desire to save money, which is about to disappear in the process of bankruptcy of Lysyakov. 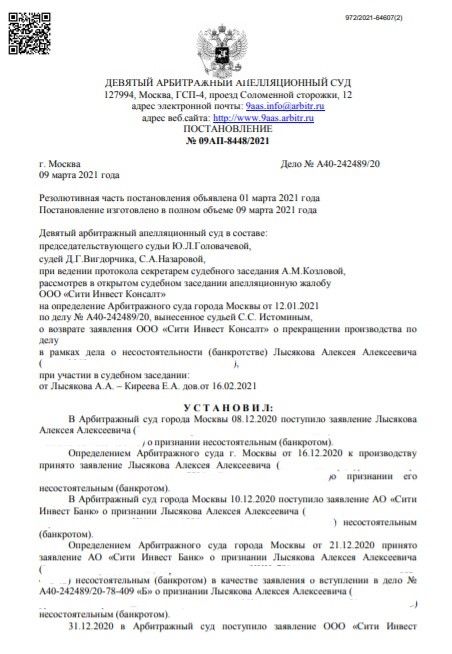 After all, the main shareholders of the bank Leonid Shorsher and Sergey Kamzin, do not prevent Mr. Lysyakov from going bankrupt. Recall that it was Lysyakov who previously entrusted them with literally 100 kg of his own cash, so to speak, bypassing formal procedures.

And here it is worth recalling that ill-wishers have already reproached the financial institution for putting the bankruptcy of enterprises "on stream." Take at least the history of the Novgorod producer of kvass, beer and mineral water of Deka OJSC, whose former co-owner Konstantin Barinov claimed that it was City Invest Bank that was involved in the fact that he lost the company's shares, in the withdrawal of trademarks offshore and even in the "seizure" of his own apartment, as Zaks.ru wrote about.

Once Barinov owned Decoy in equal shares together with Andrei Mansky, then they launched an investment project for the construction of a malt plant in St. Petersburg - CJSC Nevsky Bereg. Since 2006, Deka and Nevsky Beach began to take loans from City Invest Bank, and in 2008 the partners decided to divide the business. In 2010, with the assistance of Andrei Mansky and Promsvyazbank (also one of the main creditors), the owner of Nevsky Beach was changed. In the same year, City Invest Bank became the nominal holder of Deki shares. And the trademarks "Nikola" and "Big Kvass," once registered with LLC "Eschesnab," were transferred to offshore Alizino Ltd.

On this occasion, Barinov turned to law enforcement officers, as a result of which Andrei Mansky became a defendant in a criminal case of fraud for bringing trademarks offshore, Vedomosti wrote. However, the case was quickly hushed up.

According to Zaks.ru, in May 2011 it was reported that the owners of about 60% of Deki were the structures of Nikolai Levitsky, president and co-owner of the Geotek oil service company, Gennady Timchenko's partner in the oil business. According to the publication, Levitsky bought the assets from Promsvyazbank, wanting to help his long-time friend Sergei Kamzin. In turn, Barinov in 2011 pointed out that Levitsky and Kamzin controlled approximately 30% of Deki. Levitsky himself refused to comment on this situation.

It turns out that Mr. Kamzin in his acquaintances may have such influential merchants as Mr. Timchenko and his partners? Well, it's not surprising then why Lysyakov at one time chose City Invest Bank. Can a financial institution provide special financial services to "its own"? For example, specifically bankrupt companies...

And here it is worth recalling another bankruptcy case of City Invest Bank - strategically important for the defense capabilities of the Russian Federation NPO Dalex. At the end of last year, the same "City Invest Consult" entered the bankruptcy process of the enterprise, becoming a third party in the corresponding case. Moreover, at first, the City Invest Bank structure wanted to enter the process immediately as a plaintiff to the plant, that is, to present some requirements to it and thus get the opportunity to influence the bankruptcy process more strongly. However, even now the situation allows her to receive all the information of interest to her about the case, indirectly controlling the bankruptcy process of the NGO Dalex.

"City Invest bank" appeared on NPO Dalex not accidentally: initially to the enterprise exposed claims of LLC AvtoMetanServis, and the Ltd company is founded with partner bank "City Invest of Bank" - Intrastbank. The latter in 2015 lost the license of the Central Bank for dubious cash transactions, and a criminal case was opened against its founder Oleg Tarasov, and he was put on the international wanted list, Kommersant wrote. And, here is the surprise when the security forces rushed into the financial institution as part of the investigation of this case, then they found kilograms of Lysyakov's cash. Is the circle closing on him?

Around the former parliamentarian really suspiciously a lot of bankruptcy. Recall at least the situation with the very "Infaprim," which was once controlled by George Sazhin. Earlier, the main asset of the latter was Nutritek, which owned a baby food plant located in Istra and cost 2 billion rubles. In 2010, a bankruptcy lawsuit was filed with the Arbitration Court of the holding, Sazhin was declared bankrupt as an individual. And then the assets as a result, through a number of transactions, were owned by Infaprim. 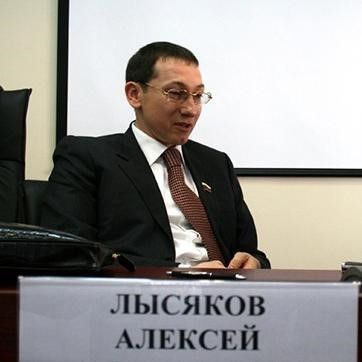 However, Sazhin himself denied communication with the company, and later in the media there was information about the alleged raider seizure of the plant by persons close to Lysyakov. Ultimately, the company was bankrupted, Sazhin became a defendant in a criminal case, was put on the wanted list and lost all his property. And Lysyakov suddenly became chairman of the board of directors of the company. Earlier, The Moscow Post spoke in detail about this story, as well as about similar situations with the St. Petersburg concrete manufacturer Lenstroydetal and Avant, the general contractor for the construction of Zenit Arena.

But what we see now: the very Infaprim fits into an investment project with the government of the Moscow region. Where, it is asked, does the company intend to take money if its owner himself is bankrupt? It is possible that in this story City Invest Bank will pop up - under the pretext of "investments," it can be easy to withdraw a substantial amount of money.

Moreover, on the part of the company, an agreement with the government of the Moscow Region was signed by Infaprim shareholder Zafar Asimov, who allegedly at one time helped Lysyakov gain control of the organization. In other words, helped bankrupt? Well, it becomes alarming that such "bankruptcy cases of masters" will turn around with a new project...

In the meantime, the situation from the outside looks as if Lysyakov's bankruptcy is controlled. Leonid Shorsher and Sergey Kamzin can help him in this matter to help save the business. But what, I'm sorry, is bankruptcy if the enterprise controlled by the ex-deputy is going to implement a multi-billion dollar investment project?

It seems that Lysyakov could put the bankruptcy of enterprises "on the stream." But City Invest Bank was reproached for the same. And suspiciously many intersections in the fate of the ex-deputy and financial institution. All because they, so to speak, are one?