Chizhov is not alien to resentment against journalists

On the eve of the State Duma elections, deputy Sergei Chizhov polished the press and came to the conclusion that something should be done about it?

According to the correspondent of The Moscow Post, State Duma deputy Sergei Chizhov filed a lawsuit against our publication. The reason for the indignation of the Voronezh deputy and businessman Sergei Chizhov is as follows - one of the materials of our media - "The daughter of the Voronezh governor Gusev" fit "into his business gallery," it turns out, defames the image of the parliamentarian. The fact is that in the publication the author talks about the existing business policy, while the legislation of the Russian Federation prohibits entrepreneurs from doing business.

Chizhov demands to remove the publication about him from all sources, write refuting material, and also pay moral compensation in the amount of one million rubles. That's how much it costs to hurt the parliamentarian's self-love.

The information in this article, as we are convinced in the statement, "does not correspond to reality, is extremely negative, contains an accusation of a person in violation of the Constitution of the Russian Federation, Federal law and defames the plaintiff's honor, dignity and business reputation."

It is worth noting that the author of the material is based on the source of Rusprofail, and does not give his own guesses or rumors, passing them off as verified information. Now, by the way, according to the aforementioned website, Sergey Viktorovich Chizhov is the founder of 5 organizations.

Sergey Viktorovich Chizhov is the full namesake of the State Duma deputy, who is the owner of the famous Chizhov Gallery. And therefore, seeing that there are several law firms in the possessions of Sergei Viktorovich (in particular, the Anastasia Chizhova Gallery), the author certainly drew attention to the fact that the businessman's shares are not in any trust, as required by law, for example, from parliamentarians. 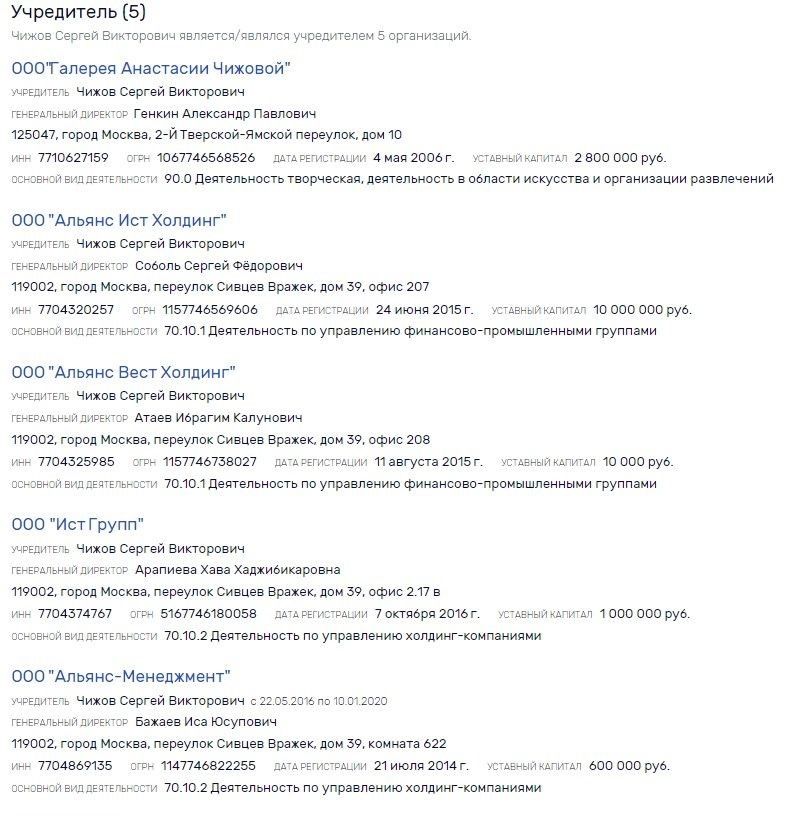 As an argument that information about Chizhov's business is not reliable, Chizhov's defense cites the following: they say that the company owner's TIN indicated in Rusprofail's extract does not correspond to the parliamentarian's TIN. Which means that we are talking about a completely different person. 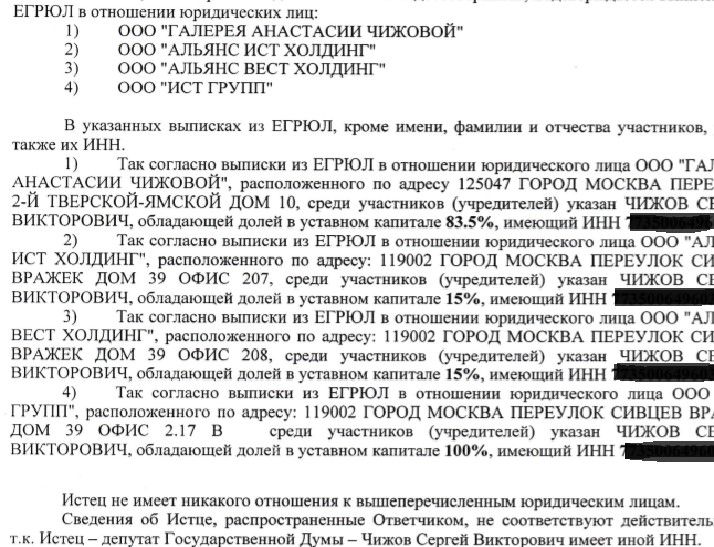 Moreover, Chizhov himself assures: it is impossible to confuse the plaintiff with another person. He is the only State Duma deputy with that name.

But, it turns out, the whole Voronezh region is in the dark and confuses deputy Chizhov with a certain businessman with the same name! The fact that no one else is behind the companies, like a parliamentarian, has repeatedly written Notepad Voronezh, Kommersant, etc.

However, Mr. Chizhov's claims relate to the assets described above, which are managed by his full namesake. It is noteworthy here that the trial, during which it turns out who is behind what, will last a very long time. Just have time to pass elections to the State Duma, before which the information in the media about the assets probably managed by the deputy may not affect Chizhov's career in the best way. But now, having a claim for the protection of honor on hand, we can say: there is a trial, journalists have all messed up. And bribes are smooth!

After all, the politician "excited" only now, although the article was published in June 2020. All this time, the deputy saved up a grudge, or did he remember that before the election he needed a brilliant reputation?

A good politician is a competent businessman

It seems that Chizhov may deliberately try to take extra attention away from this business. After all, now the shopping center "Chizhov Gallery" is going through difficult times. For example, with one of the partners - Stroyservice LLC, which is on the verge of bankruptcy, has a 15% stake in the Chizhov Gallery shopping center, which still owns a number of real estate objects - Art Hotel and Ramada Plaza, the parliamentarian began a corporate conflict.

The fact is that the main creditors of Stroyservice - Sberbank decided to collect debts from the company and announced the amount of its claims - 2.9 billion rubles. And surprisingly, partners from the Chizhov Gallery also demanded the return of debts in the amount of 145 million rubles! As Kommersant wrote, the owners of Stroyservice Alexander Mushtaev and Pavel Kakalia are confident that the claims to their company by creditors are the work of Sergei Chizhov, who wants to take their share in the mall and squeeze the company out of this business.

Representatives of Stroyservice say that their partners in the Chizhov Gallery were engaged in unreasonable enrichment, which, according to the company, was formed from the retained share of the partner's rental income in the amount of as much as 347 million rubles, as well as 27.3 million rubles of interest for using other people's funds in 2018-2019 years.

At that time, the Chizhov Gallery calmly assured: "There were contradictions between us that had previously become the subject of litigation. And after their completion, our relations successfully continued, and the joint project developed. " Did you do a good mine with a bad game?

In the region, the businessman-deputy feels very comfortable. So recently, as Kommersant wrote, it decided to demand a tax cut. The entrepreneur did not like the amounts he gives to the local budget for property tax for the third stage of the largest shopping center in the city and the complex of elite housing in German. And therefore, the company sent a lawsuit to the regional government, requesting the calculation of tax at cadastral, and not book value. If successful, payments can be reduced from 180 to 20 (!) Million Rubles per year. Not bad savings!

What about the authorities? There are suspicions that they will be able to forgive the company and this. After all, at the expense of her, the family of Governor Alexander Gusev can receive money without any taxes. The fact is that since 2019, the daughter of the head of the Voronezh region, Ekaterina Guseva, has been working as a marketer at the Chizhov Gallery. Moreover, as Notepad wrote, the authorities have an individual approach to the only daughter of the governor: she may disappear among the week, and then how nothing happened to go to work on Monday. And before the pandemic, Catherine was very often in foreign countries. Well, still. With this status and connections.

And from December 10, 2019, Guseva became the owner of 50% in Stupino Spa LLC, a hotel near Ramon, which bought a stake from the same Chizhov Gallery. According to Rusprofail, the director is Andrei Klimentov - a deputy of the Voronezh Regional Duma, United Russia. As Andrei Iosifovich Makin claimed in his telegram channel, allegedly Klimentov is a close friend of Sergei Chizhov.

Moreover, and this is not all. As Kommersant wrote, the deputy most likely has patrons in law enforcement agencies. Back in 2012, before the elections, almost a third of the shares of the Chizhov Gallery company were received by Larisa Vinogradova, a relative of the aforementioned Andrei Klimentov. And she is, it is important to note, a former police officer. Earlier, Vinogradova oversaw the investigation in the Soviet district police department of Voronezh. Then it is not surprising that all of the above individuals are so closely related, and there are no complaints about Mr. Chizhov. Although his persona, as if not avoided by the deputy himself, certainly raises questions.

The Chizhov Gallery dates back to 1997, when Sergey Chizhov founded the Megapolis Economic Development Association. She later reformatted into the Chizhov Gallery. In the 90s, two attempts were made on politics, RIA Voronezh wrote. Many explained what happened by the business of the merchant.

However, Chizhov himself connected them with his political activities. He must know better. However, the "echo of the 90s" now and then comes on his heels. According to the author on the website Karaichev.com allegedly a deputy in the past could be related to the "Niko Association" - a company allegedly engaged in the sale of counterfeit alcohol. At the same time, the money could be carried out through a bank, which also subsequently turned into the previously mentioned Megapolis.

The same blogger on the website Karaichev.com claims that, allegedly due to the activities of "Nico," people from whom members of this "association" borrowed money disappeared and died. Moreover, they could not act without the help of the security forces.

Among the likely "patrons" of Chizhov and his friend Nikolai Evdakov (today - partner of the governor's daughter Ekaterina Guseva), ill-wishers called the then head of the personnel service of the State Internal Affairs Directorate of the region Alexei Boev.

Now the good share of assets owned by the parliamentarian has sad financial indicators - with plus revenue, the company does not see profit. It is worth thinking, maybe money is withdrawn through them? But this is, as they say, another story that the relevant authorities should tell. And the deputy is still busy with other things - he launches his honor. What to do - the deputy mandate requires it.