"Change" for Zyuganov: who will take the place of the Communist Party?

It seems that the Kremlin seriously thought about holding the Communist Party and Gennady Zyuganov on a "political pension." But who in this case will become the "left foot" of the Russian government?

According to the correspondent of The Moscow Post, the Communist Party faction in the State Duma sent a letter addressed to the head of the Investigative Committee of the Russian Federation Alexander Bastrykin with a request to open a criminal case against the head of the Liberal Democratic Party Vladimir Zhirinovsky. The Communists considered that the recent proposal of Vladimir Wolfovich to ban left-wing parties in Russia incites social discord - responsibility for this is provided for in part 2 of Art. 282 of the Criminal Code.

The LDPR leader really raged - at a recent meeting of the State Duma, at which the "moose case" of communist Valery Rashkin was discussed, he once again attacked the Communist Party with sharp criticism. Prior to this, in August 2021, he called the left ideology "the most dangerous," NTV reported.

The most recent case occurred yesterday, November 28, when his comment appeared on the network after discussing the budget, where Vladimir Zhirinovsky called for the expulsion of three parties from the State Duma at once - the Communist Party, "Fair Russia - For Truth" and "New People." About this wrote RIA Novosti.

However, these are only statements by Vladimir Zhirinovsky on his most beloved (even the national question here is inferior) topic. While in the situation with the appeal to the UK we are talking about a specific case in the State Duma, which occurred on November 16. Then the LDPR leader said that it was necessary to cancel all the results of the Communist Party elections, as well as ban all left parties. Moreover, with such a proposal, Vladimir Zhirinovsky turned to the Prosecutor General of the Russian Federation Igor Krasnov.

Mutual "love" of LDPR and communists, Vladimir Zhirinovsky and Gennady Zyuganov and is known long ago to all. They "at daggers points" since the beginning of the 90th years. But this case - special. Never till this day reached cross addresses and letters to law enforcement agencies. In this case State Office of Public Prosecutor and SK. What occurs, elective fights already far behind?

According to experts, Vladimir Zhirinovsky, as a rule, speaks not only from himself, but also from a certain group in elite which it is accepted to call for eyes of "the Kremlin Tower". To what specifically to a tower can Zhirinovsky who stands behind him - a single question belongs. Another is interesting.

Objectively, the CPRF is strongly discredited, loses influence, and scandal with Rashkin only strengthened this process. The party withers, it practically has no new inflow of electorate. The elderly people voting for communists since the USSR gradually leave, giving way to new generation.

At State Duma elections of the CPRF I received 18.9% of votes that granted it the right for 48 deputy mandates. It is more, than following the results of 2016, but falls short of result of 2011 when the CPRF received a little more than 19% of votes.

In the party there is a fierce political struggle for leadership. As it is considered, the main fights were developed between the head of the Moscow city town committee of the CPRF, the distressful hunter Valery Rashkin and the first deputy chairman of the Central Committee Yury Afonin. Fight this so noisy that in itself calls into question the political future of all party structure.

Moreover, in 2021 there was also something absolutely improbable. Allegedly, the CPRF in the desire to keep in power conducted negotiations with representatives of team of the oppositionist who is behind bars. His supporters flee the country escaping from the growing wave of criminal cases, and the CPRF makes advances to such opposition? At least negotiations of communists with supporters of non-systemic opposition were announced by many experts, for example, the political scientist Marat Bashirov earlier. I wrote Lenta.ru about it.

Changes were about to happen?

There is an opinion that in imperious circles the consensus was formed, allegedly the CPRF in its current form doesn't reflect real expectations of own voters any more and can't conduct constructive work with the power. Unauthorized performances of communists for cancellation of results of elections in Moscow became a last straw this fall.

Vladimir Zhirinovsky, at all his shock value very much and very fairly clever person, most likely can act as some kind of conductor of the ideas of a certain tower of the Kremlin. And this idea is simple: The CPRF, or, at least, to her leader Gennady Zyuganov, is time to leave on deserved pension. Not now, of course, and in the following electoral period.

There is also other opinion. It was stated by the author of the Svobodnaya Pressa edition. He considers: Allegedly doesn't arrange Presidential Administration that for communists young people with the high status whereas United Russia becomes pensioner party more and more vote.

The thesis is very disputable not to mention that the author too safely undertakes to judge that he arranges or doesn't suit the Apostle. Here important another - something to change fatigue and desire representatives of different opinions and the parties of an ideological range see.

According to our sources, in AP really thought of how further to build interaction with the CPRF. Allegedly, there are two options of succession of events. And both of them, most likely, assume leaving of the CPRF and their leader Gennady Zyuganov in a political non-existence.

Option first consists in possible replacement of the CPRF as concentrate of forces of the left ideological range, on something another with the similar agenda. All of us remember an unfortunate experiment with Just Russia party which could become one of parties with the left bias. Didn't leave. And now, with Mironov and Prilepin's dismantling, there not before.

Now this role the notorious Rodina Party, at which is also recognized (let and not all hotly favourite), could undertake the person - Dmitry Rogozin. But also there is a set of the risks.

The second option consists in closer work with party New people - the fifth fraction in the State Duma following the results of elections of 2021. And these results showed that people are ready to support this structure, it answers a certain inquiry in society.

Not only that the party went to the State Duma. Formed in 2020, she managed to get to parliaments at once of 20 regions. At the same time New people" - the party system, doesn't use radical rhetoric, is ready for compromise solutions in the political field. The CPRF, it seems, too - but what is costed by one Rashkin? And he is there not only.

On this background it is unconvincing and even plans of the CPRF to receive the power in 2024 ridiculously look. It it was stated at a meeting of regional committees of party in 2020, Nezavisimaya Gazeta wrote. But then results of elections weren't known yet, there was no scandal with Rashkin, and Yury Afonin wasn't in a rank of the first deputy chairman of presidium of the Central Committee of the CPRF yet. 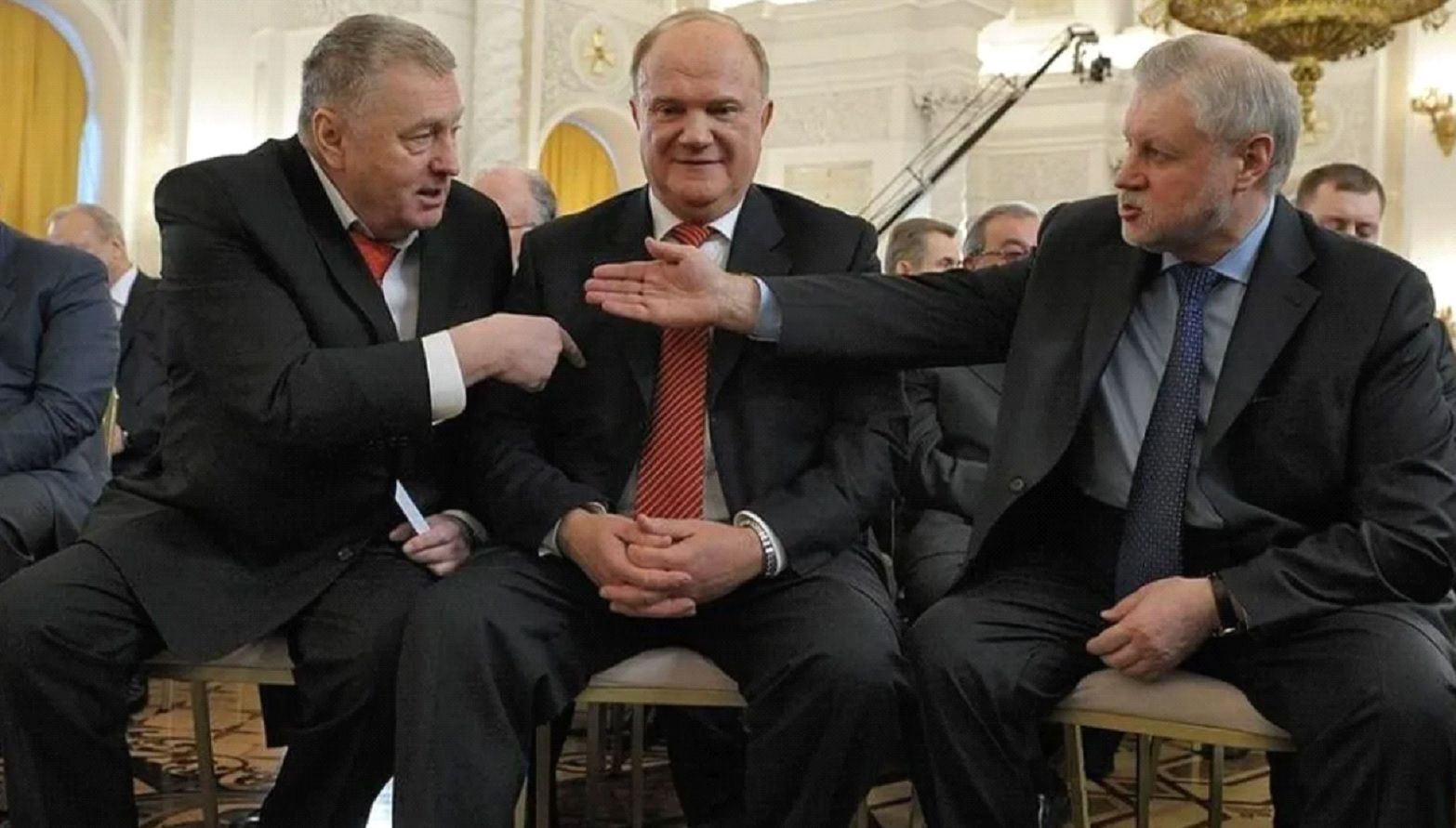 Thus, Vladimir Zhirinovsky can act as a kind of channel for publicizing the plans and ideas of a certain part of the Russian power elite.

This could be bad news for Gennady Zyuganov, but the elderly politician himself seems to be so tired that he does not think what will happen to the party next. He will receive his part of the administrative rent following the results of the 2021 elections for sure, but then the party can really wait for changes.

No one is eternal, even Gennady Andreevich at the head of the Communist Party. But how will Zhirinovsky do without such a glorious object of criticism? To begin with, he himself will need to get into a new convocation, so life will show.