A possible new head of the CEC of Udmurtia may be connected with a lot of business interests of people with an ambiguous reputation. Such a leader, even being the person of the governor of Brechalov, can bring a lot of problems to him and to the whole region.

As the correspondent of TThe Moscow Post reports, the Central Election Commission of Russia recommended to elect the former ombudsman of the Republic of Udmurtia Veniamin Solomennikov as the chairman of the CEC of Udmurtia. He is also a freelance adviser and one of the closest associates of Head of Udmurtia Alexander Brechalov - his possible appointment is associated with the desire of the latter to strengthen his position in the CEC in the run-up to the State Duma elections in 2021.

However, one should not look only for the trace of the head of the region concerning the imminent possible appointment of Solomennikov. Many influential people of the Republic are tied to Solomennikov, who would also like to be elected - both to the State Duma and to the State Council of the Republic, and such support will do good in local elections. Including those who can cause reputational damage to the current governor.

Mr. Solomennikov himself, a former ombudsman, became a Deputy of the State Council after this work. However, he resigned his powers at his own request in 2015, less than a year after becoming an adviser to Brechalov. Then he went to work in the CEC with the right to vote. Now the entire election commission of the region can appear "under him".

Meanwhile, detractors call Solomennikov a careerist who allegedly will stop at nothing, including a radical change of his own views and positions, in order to get what he wants. In his past, there may have been a story that vividly illustrates this thesis.

According to the authors of the Ochki Brechalova telegram channel, allegedly in the early 90s he had an unspoken conflict with Vladimir Bodrov, the current leader of the communists of Udmurtia. Both worked in the Igrinsky district of the CPSU, Solomennikov was the second secretary of the Igrinsky district committee, and Bodrov was the head of the organizational department of the same district committee of the CPSU.

Then the question of who would be nominated to the first secretary of the district committee was being decided. Solomennikov might have wanted this position badly, but Bodrov had more prospects. Then there was information that Bodrov allegedly could be involved in a serious crime against the person - rape. Subsequently, it was not confirmed, but something else is interesting.

Allegedly, Veniamin Solomennikov, after the plenum, invited Bodrov to a conversation, where he offered to leave the district committee and go far away, in return, Solomennikov allegedly promised to help in hushing the case up. Bodrov took advantage of that and went to Izhevsk. If this story is true, then it turns out that Solomennikov was ready to cover the party member from possible criminal prosecution in order to open new career prospects for himself, wasn’t he?

And what kind of candidates, in this case, will Solomennikov move in the elections as the head of the CEC of the Republic? One of these people may be the scandalous Udmurt businessman Mikhail Mokretsov. He is the owner of one of the most problematic developers in the region, AcademGrad LLC, from whose actions dozens and hundreds of shareholders could suffer.

The connections between these two people, Mokretsov and Solomennikov, are worth looking for in business. Since 2010, the old "communist" (or rather, already the Fair Russia Party member) Veniamin Solomennikov,, had been the general director of CEC Finance LLC before the path to the State Council "opened" for him.

The office is very interesting now as well. Formally, Solomennikov has nothing to do with it, but the ownership structure is hidden. 25% belongs to an unknown Svyatoslav Yakimovich, where the remaining 75% is not clear. But the general director there is Maria Veniaminovna Solomennikova. The name indicates that this may be the daughter of a freelance adviser to the head of the Republic, Veniamin Solomennikov. 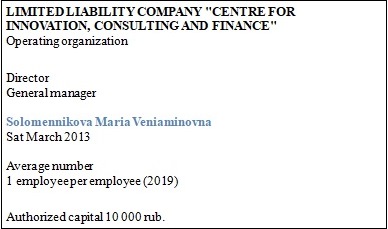 Perhaps the CEO could explain why an office with an authorized capital of 10 thousand people employs only one employee, and all financial indicators from 2011 to 2018 are indicated as zero. It's not even that, but the fact that she is a co-founder of another such office, CEC Development LLC. The same, because there are also zeros everywhere in the financial columns with a single employee and an authorized capital of 10 thousand rubles. That is, it resembles a shell.

And another co-founder of the same company, together with Solomennikova, is Valentina Mikhailovna Mokretsova. She is also the CEO of this company. Apparently, this is the daughter of the already mentioned owner of AcademGrad LLC Mikhail Mokretsov. 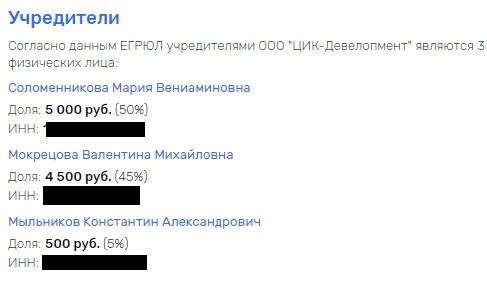 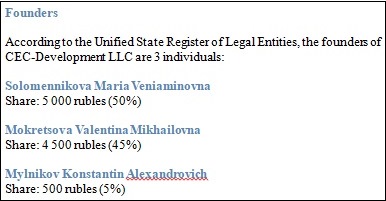 Next, CEC Development LLC has a subsidiary structure, now liquidated - United Construction Company Constanta LLC. It is difficult to say what the company actually worked with. Founded in 2017, it was liquidated in 2019. The authorized capital is 10 thousand rubles, and there are also zeros in the financial columns everywhere. It seems that the company was created for some short-term purpose, for example, to withdraw funds, and then simply abolished. 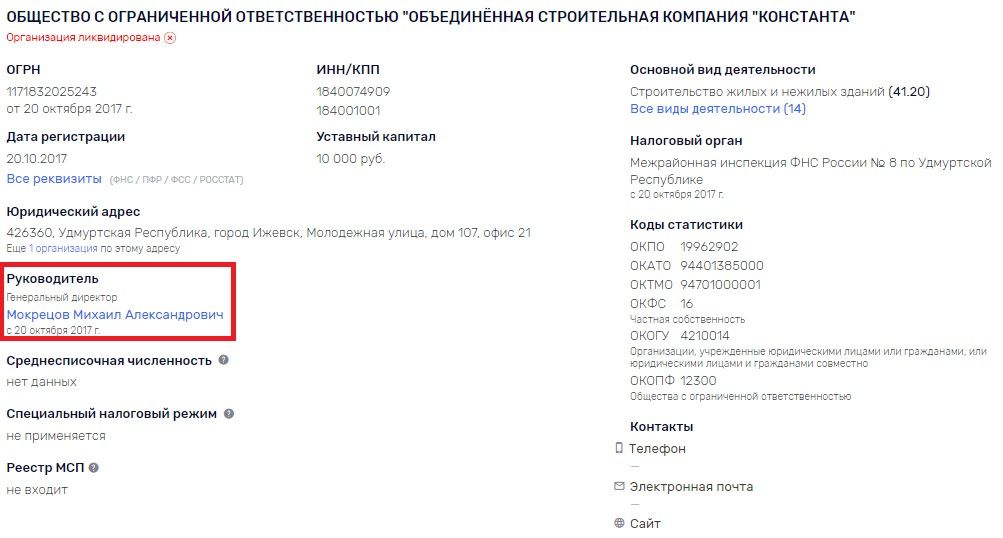 The general director of this company was Mikhail Mokretsov. That is, through a network of connected offices, a possible connection between the Solomennikov family and the Mokretsov family is traced. The latter regularly tries to be elected to deputies of different levels. Last September, he was a candidate for the Sarapul City Duma, for the deputies of the City Duma of the City of Mozhga municipality and for the Glazov City Duma. Information about this is available on the Candidates.golosinfo website.

However, Mokretsov did not become the people's deputy. Most likely, the reason for this is the reputation of his AcademGrad company. According to evil tongues, allegedly Mokretsov aimed to get into power in order to to protect his own business interests. But it seems that his development activities are notorious. Will Solomennikov "help" him next time?

AcademGrad implemented a number of development projects in the territory of Udmurtia, which ended in courts and high-profile scandals with real estate investors. One of such scandals - with the construction of the Academicheskiy residential complex in the Zavyalovsky district of the Udmurt Republic.

The Prosecutor's Office, together with specialists of the Department for Control and Supervision of Equity Participation, conducted an audit of the activities of AcademGrad LLC and revealed violations of the requirements of the legislation on equity participation in the construction of apartment buildings. Information about this is available on the MO Varaksinskoe website of the corresponding district of the Udmurt Republic.

It turned out that the AcademGrad LLC developer was not entitled to attract money from citizens for the construction of an apartment building before the registration of contracts in the Unified State Register of Rights to Real Estate. But this is exactly what the company was doing, and due to this reason it received a case of an administrative offense against the then director of the Company, Khasanshin.

Now Khasanshin, who came under the blow of the prosecutor's office, is replaced by Mokretsov himself. However, it is not clear at all where the money of the real estate invesors is. Because at the end of 2019, the developer company had zero revenue and a profit of a measly 2.3 million rubles. At the same time, only two people work in the structure, and the authorized capital of the company is 10 thousand rubles.

In parallel with this, on the Internet you can find reviews about AcademGrad, which suggest that something is not clean in the company. Thus, one of the authors of the forum on the Izhevsk.ru website, answering the question of another "forum user" about what he thought about this developer, said that representatives of the company tried to get money from him in debt against the security of the site. And it doesn't smell good at all - it looks like he wouldn't have seen the money or the land in such a case.

Here the possible desire of Mokretsov to be elected to power, in which Solomennikov could help him can be hidden. After all, now AcademGrad conducts 11 courts at once, many of which are of the first instance, and still without decisions. And from those decisions, that is, it follows that Mokretsov could not even pay the contractors of his company. For example, security companies.

This, for example, is stated by the court's decision on the claim of the security company Makros-IZH, which successfully tried to get the payment of funds for the provision of security services from AcademGrad. The court's decision can be found here.

There are several such solutions. Another court decision is related to the claim of PJSC Rostelecom, which had to recover about 6 thousand rubles for the delivered communication services from AcademGrad. The claim was satisfied, the decision can be found here. But the question arises - why couldn’t Mokretsov pay -greed, forgetfulness? It's too small for a developer to run away from a debt of 6 thousand rubles.

But the new cases related to the real estate investors are much more interesting. For example, in September 2020, the Foundation for the Protection of the Rights of Citizens Participating in Shared-Equity Construction filed a lawsuit against AcademGrad, the essence of which has not yet been disclosed.

But it is easy to assume that it is connected with the protection of the rights of real estate investors, who, apparently, still can not get any apartments or money from the company. You can get acquainted with this case in the file of the Arbitration Court. A meeting on it is scheduled to take place tomorrow, March 19.

Will Solomennikov move such people to power if he becomes the head of the Central Election Commission of Udmurtia? Those ones who can use a powerful resource to avoid responsibility for business failures?

If so, it will bring Brechalov himself much more problems than benefit. However, it is rumoured that he has accepted a possible imminent resignation, and now simply puts the maximum of his people in different positions, in order to subsequently maintain the levers of influence on the region. And if there appear questions about the conflict of interests towards Solomennikov and Mokretsov — he will have nothing to do with it, will it?