Billions of rubles can be "divided" on the purchases of the Social Insurance Fund of the Russian Federation, but the former Head of the Fund, Andrey Kigim, got out of the way. Will his appointees in the Departments and contractors, who may be backed by influential businessmen, have to take responsibility?

The Medeka company belongs to Alexey Krygin. He is also its CEO. At the same time, Mr. Krygin was the founder and CEO of a number of other structures that are engaged in the wholesale trade of pharmaceutical products. They resemble outright clones of the first structure, and also receive state contracts from the Social Insurance Fund and its structural divisions for hundreds of millions of rubles. 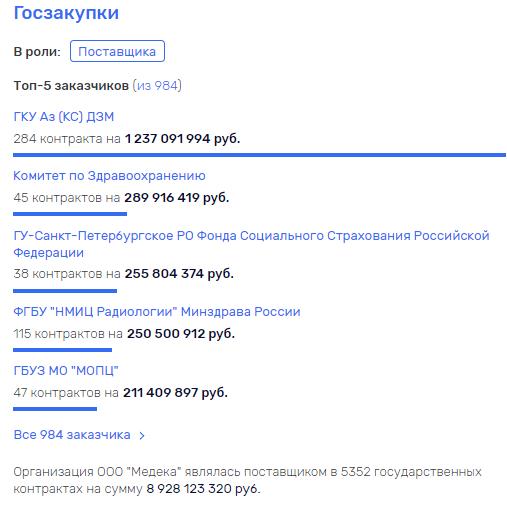 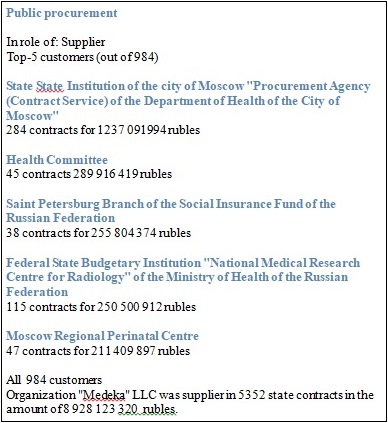 Dubious purchases of the St. Petersburg State Department of the SIF, which attracted the attention of journalists

The total pool of state orders of the Medeka company is almost 9 billion rubles, of which 255 million rubles are accounted for the St. Petersburg Department of the Social Insurance Fund. However, Krygin is the owner of Medeka-M LLC, which does the same thing as Medeka. Why would he need two similar companies? In order not to "put all the eggs in one basket"? 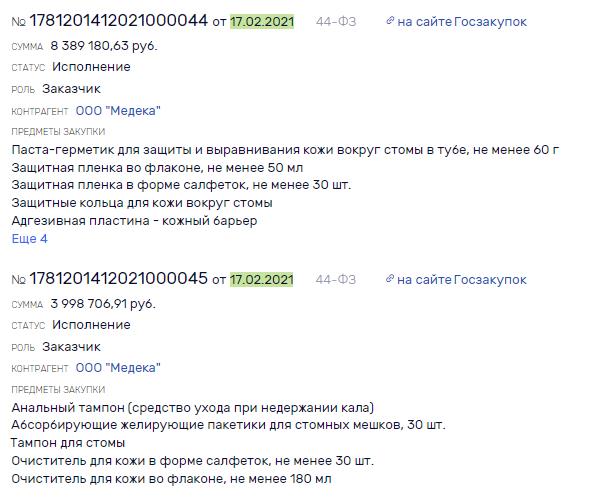 It seems that this particular company directly specializes in working with the SIF departments throughout the country. In its asset there were state contracts for 232 million rubles, and almost all - exactly with the divisions of the SIF - Bryansk, Tver, Kursk, and so on. At the same time, the authorized capital of the company is a measly 10 thousand rubles, and information about the company's finances is not specified in the information systems at all. 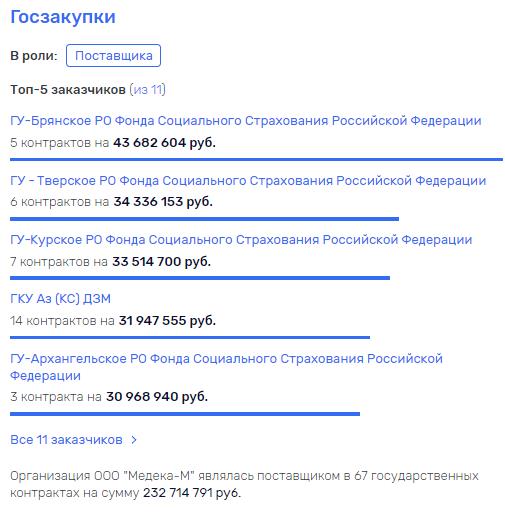 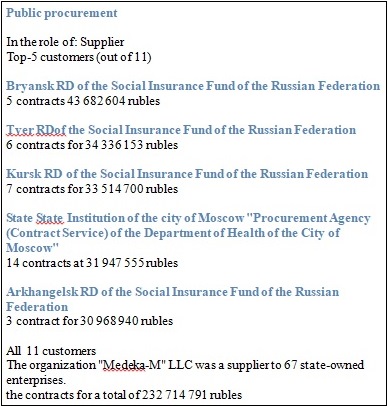 Another office, which is written on Krygin — Mofarm LLC. And again - trade in pharmaceutical products. The amount of state contracts is over 1.8 billion rubles. Mostly with health care institutions. And again - the lack of information about financial indicators with an authorized capital of 10 thousand rubles and an unknown number of employees in the state.

However, Mr. Krygin may be only a figurehead, while the key beneficiaries of this "celebration of life" are likely to prefer to remain in the shadows. According to the Daily Storm, Medeka is part of another group of companies with a familiar name - Medipal-Onko GC with a turnover of billions of rubles. But its owners are already much more well-known - these are professionals of the pharmaceutical business Konstantin Sevryugin, Alexey Nemtsev and Elena Yudina.

Their surnames have repeatedly appeared in scandals with public procurement. According to the authors of the Vademec.ru website, allegedly earlier their company conducted a series of public procurement from the Moscow Department of Health, and in 2018 signed a contract for the purchase of immunoglobulin, and this was the only purchase of five tenders. The initial price is 1.25 rubles per milligram, though in case of victory of Medipal-Onko, the price allegedly turned out to be 3.5 times higher. At the same time, according to the authors of the same website, Moscow patients experienced a serious shortage of this medicine.

However, the contest simply did not receive any other applications. According to evil tongues, the tenders could be tailored to one specific structure, it may well be Medipal-Onko. Others could simply not pass due to the specifics of the auction documentation. Does it mean that they could want to transfer all the contracts to a particular office, and when it did not work out, the Muscovites were left without medicines?

A similar situation is developing today in the already mentioned Department of the Social Insurance Fund in St. Petersburg. Scandals there rattled the entire cadence of the former head of the SIF, Andrey Kigim, who has moved to the leadership of the Pension Fund of the Russian Federation now. In the future, he may lead a joint structure of the SIF, the Pension Fund of the Russian Federation and the Federal Compulsory Health Insurance Fund. Is it time to clean up?

Now, in 2021, residents of St. Petersburg have to wait a month or more for the payment of sick leave from the Social Insurance Fund. They nod in the direction of employers who submit documents with errors and do not correct them. People can't get sick leave, including for child care. Fontanka wrote about the situation. Can it be that the funds that should be paid to people go to the service of the "wishlist" of lured commercial organizations?

Scandals have thundered there before. In 2014, that is, already under Kigim, the FSB Department discovered multibillion embezzlement during the reconstruction of the Fund on Bolshaya Posadskaya Street. This was written by Rossiyskaya Gazeta.

In order to receive funds under the concluded contract, the company presented a fake positive conclusion of the State Expert Examination, indicating that the completed project complies with building codes and regulations. In fact, this draft was not prepared.

It turned out that Krygin, among other things, is a big fan of hockey. He plays in the amateur hockey team of one of the largest railway operators in the country, Novotrans GC. It's no secret that such private hockey teams are a kind of clubs for acquaintance and interests. They don't take random people there. 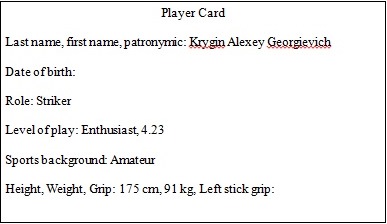 The company belongs to the scandalous businessman Konstantin Goncharov, who, according to evil tongues, in recent years allegedly experiences huge difficulties due to the attention of law enforcement officers and financial problems.

At the end of 2019, it became known that there was a pre-investigation check in Novotrans. Novye Izvestiya wrote about this. Allegedly, the structure could have something to do with possible money laundering through the Transrail Car company associated with Goncharov. At that time, the rumours said that the businessman could issue fictitious documents for the supply of petroleum products, and the total amount of funds that could be withdrawn exceeded $10 billion.

ARGO LLC, allegedly, attracted the attention of the security forces, where from 2013 to 2015 the general director was Konstantin Goncharov himself. Even then, the co-founders of this company, as well as many other structures of Novotrans, included Goncharov's wife Alina.

As far as we know, it was Alina Rashitovna Goncharova's father – Rashit Sharipov - who gave the money to his son-in-law to buy Novotrans. Since 2014, Alina Goncharova has been holding the post of financial director of ARGO LLC, and since 2015 is the first deputy of her father in the Novostrans GC.

At the same time, the mentioned Transrail Car with zero revenue took a profit from somewhere. In 2019, the structure earned 315 thousand rubles. Not a lot, but the amount of the company's assets is estimated at as much as 248 million rubles. It is clear that something is wrong - especially since in December 2019, just after the scandal with Goncharov and this company broke out, it was quickly liquidated. Ends in the water?

Detractors called Transrail Car almost a laundering office with a whole series of phantom deliveries for the Ministry of Railways, and then - under the former leadership of the Russian Railways.

Initially, it was created by the company Rail Financial, which transferred more than a thousand tank cars to the company's asset as the authorized capital. As they say, their market price at that time was estimated at about 18 thousand dollars per tank, but Rail Financial allegedly got them through the Ministry of Transport and affiliated companies for only 2-5 thousand dollars per piece. Novye Izvestiya wrote about the situation. Most of the tanks were leased to foreign companies friendly to Transrail Car. Accordingly, the money for their rent was to go abroad. As a result, Transrail Car quickly became unprofitable. Realizing that such schemes could attract the attention of the security forces, the company could take a loan from Rail Financial at 18% per annum for 6 years. The loan amount was $107 million.

It was rumoured that the loan existed exclusively on paper and was needed for tax-free withdrawal abroad of both the loan itself and the huge interest on it. After 6 years, the loan was extended for another 6 years and then for another 12 years.

There is an opinion that if the money was withdrawn, it could be done through allegedly fictitious transportation of petroleum products. Transactions could be made through the offshore division of the carrier company, and the funds were sent directly to this company. At the same time, the transportation of goods in could not exist. Thus, about $10 billion could have left the country, couldn’t it? 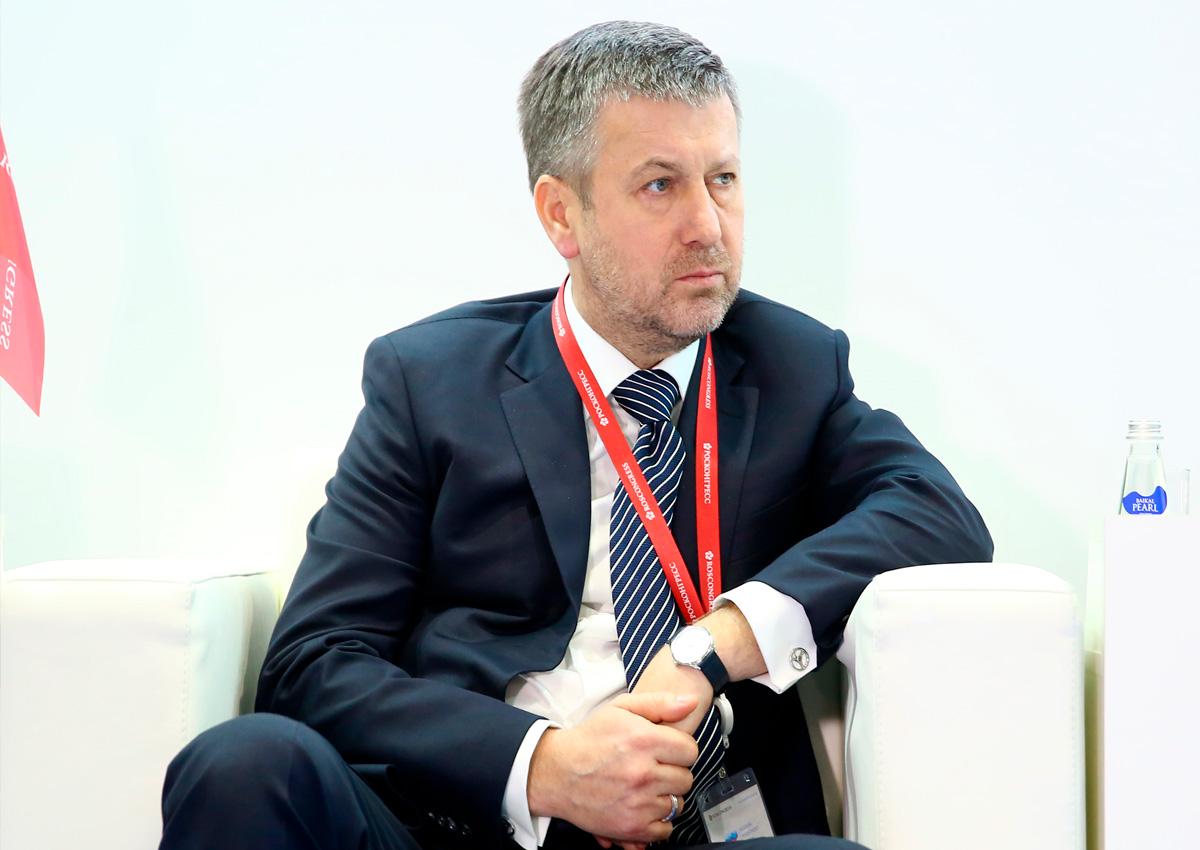 Did Konstantin Goncharov get into another scandal by not answering the questions of the security forces concerning Novotrans?

We can not exclude the option of "cleaning up" the SIF and its counterparties after the departure of Kigim. Having received the support of Mikhail Mishustin, he now hardly needs to worry about the problems that he left behind in the SIF. But is it time for Goncharov, who is under attack right now, to be nervous?