In the "scam of the century" the names of Vladimir Artyakov and Andrei Bokarev may sound.

The case against the ex-head of the RTH Sergey Shpak may be beneficial to the head of Rostec Sergey Chemezov. Not foreign companies for him should have profited a lot from the collapse of the RTH, and where the state money went VEB.RF - it is still not clear.

According to the correspondent of The Moscow Post in Moscow, employees of the Moscow Investigative Committee of the Russian Federation and the FSB detained Donetsk businessman Igor Sosnovsky, adviser to the former Prime Minister of Ukraine Mykola Azarov. Sosnovsky could act as a "resolver" - allegedly offered his services to representatives of the former general director of Railtransholding (RTH) Sergey Shpak.

According to investigators, Sosnovsky proposed for $5 million to organize a letter from FSB director Alexander Bortnikov to the head of the Ministry of Internal Affairs Vladimir Kolokoltsev, after which the former general director of Railtransholding (RTH) Sergey Shpak would be removed from the international wanted list, and his criminal prosecution for embezzlement - stopped.

According to evil languages, allegedly this situation may not lead to Shpak at all, but to the head of Rostec, Sergei Chemezov. The latter, or rather the structures to which Rostec was related, in particular, Uralvagonzavod, could benefit from the criminal prosecution of Shpak, regardless of whether his actions were a crime.

The whole thing is in the market for leasing railway cars, in which Uralvagonzavod and its former subsidiary UVZ-Logistics are actively operating. UVZ through Concern Uralvagonzavod JSC is part of Rostec, and UVZL, which changed its name to Modum-Trans LLC, is now in the hands of oligarch Andrei Bokarev. It is headed by no one else, like Dmitry Artyakov - the son of Vladimir Artyakov, first deputy general director of Rostec Sergey Chemezov.

The light on this can shed just the story of Mr. Shpak, who can now hide in one of the Western countries. Recall that, according to investigators, Sergey Shpak, former general director of VEB Leasing Vyacheslav Soloviev, first deputy general director of RTH Vitaly Gybert, general director of RTH-Logistics CJSC Alexander Shapovalov and a number of defendants created a criminal group to steal funds that the holding companies transferred to VEb About this writes Kommersant.

We are talking about 1.8 billion rubles owned by VEB Leasing. The structure issued money for the supply of about 800 cars. However, when the execution of contracts was checked in 2017, it turned out that the cars were not delivered, and the funds transferred for them were withdrawn after two dozen firms that were not engaged in real economic activities.

The strings of this story can stretch to the former head of Vnesheconombank Vladimir Dmitriev, under whose leadership the person involved in the case, the ex-general director of VEB-Leasing Vyacheslav Soloviev, worked. In 2016, Dmitriev was replaced by Sergey Gorkov. According to the authors of the Banksta telegram channel, allegedly barely learning about the change of leadership, Vyacheslav Solovyov did not appear at work, and later could leave for one of the countries of Europe.

Moreover, Gorkov allegedly agreed to take the post only if he refused criminal cases for corruption and fraud against the team and the former head of the state corporation Vladimir Dmitriev. As if there was a "grandiose system of kickbacks for loans," in VEB-Leasing. If this is at least half true, then such a "condition" is clearly not the bliss of Gorkov himself. 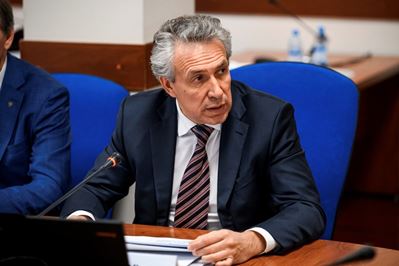 Sergey Gorkov "cleaned his tails" in VEB for Dmitriev and Soloviev in the interests of Chemezov?

A similar position could be suggested to him through his people by Sergey Chemezov. If we look at everything through the prism of the benefits of Uralvagonzavod and a possible scam with VEB-Leasing funds, we can conclude that it was profitable to turn off Shpak and his Railtransholding (RTH) from the scheme with the supply of cars.

But the scheme itself, if it existed, could be in the hands of the same UVZ-Leasing. And did she not receive the wagons that the Railtransholding was supposed to deliver under an agreement with VEB? In this case, it would be extremely necessary to cover the former VEB leadership.

In addition, it is known that Uralvagonzavod and Railtransholding Sergey Shpak were in fierce competition. It got to the point that Uralvagonzavod tried to bankrupt RTH. He filed a bankruptcy lawsuit, but the essence of the claims was not disclosed. According to Kommersant, earlier UVZ stated that RTH owed him about 1 billion rubles for reselling cars to Kazakhstan, and before that, the court had already recovered 287 million rubles in favor of UVZ.

It seems that RTH tried to undress like sticky. And it seems to have turned out. The organization was liquidated just recently, in March 2021 with losses over the past year at the level of 359 million rubles. There is no longer a competitor to UZV, nor is there a leasing subsidiary of the company. UVZ under the "wing" Chemezov can celebrate victory while Shpak fights off the claims of law enforcement agencies? Yes, allegedly with the involvement of "resolvers."

In this logic, Chemezov would not be profitable if the criminal proceedings against Shapak were completed. Indeed, in this case, he could freely tell what exactly happened to VEB-Leasing funds and what role UVZ and his former daughter, now Modum-Trans, could take in this.

Just the latter could get cars from the GTLK (it is she who deals with leasing issues, VEB-Leasing provides funds through the bank), which were not delivered under the contract with RTX Shpak. She got cars that were supposed to go to Vostok1520. It was controlled by businessman Sergei Generalov.

And those GTLK purchased cars from the United Car Company Alexander Nesis, another of the kings of the railway state order of the Russian Federation. Then it was not about 800, but immediately about 4.5 thousand new railway gondola cars. The Moscow Post wrote about the situation that happened in the same fateful year for Shpak in 2017.

The amount of the transaction then amounted to 31.3 billion rubles. However, in December 2019, it became known that the GTLK broke the contract with the Nesis HVAC, and forced it to return 15.5 thousand of its cars. And they went to just Modum-Trans, which at that time belonged to the son of Prosecutor General Yuri Chaika Artem and the very son of the deputy head of Rostec Dmitry Artyakov.

Then Nesis said that their railway business was coming out at its peak. However, a number of experts are wondering - could the whole transaction not be a scam to withdraw budget funds, and then pumping Modum-Trans, which could not act without the cover of Sergei Chemezov? In addition, the Chaek family has long been trying to connect with Sergey Chemezov - allegedly, it was he who curated a number of Chaek projects in the garbage business.

But another thing is interesting - why both Chaika and Artyakov formally left Modum-Trans. Today, recall, the oligarch Andrei Bokarev (25%) is looking after him, who is also credited with ties with Sergey Chemezov and his business grip. And another 75% belongs to Invest-Logistics JSC. 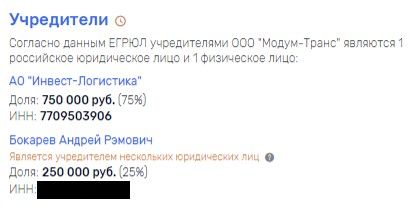 Dmitry Artyakov left the founders of Modum-Trans very recently. None will be the wiser?

It has no revenue, suffered losses in 2020 and is almost completely owned by Set-Holding JSC. Part of the shares of the latter is owned by CJSC A Priori Invest with an authorized capital of 10 thousand rubles and losses of 17 million rubles. So where is the Modus-Trans money?

So it turns out that everyone remained with their own - except for Sergei Shpak and a number of other defendants in the case, who should be associated with VEB-Leasing. At the same time, Gorkov, the former head of Vneshkeconombank, in which the situation with the cars of Alexander Nesis took place, is now quietly working as the general director of Rosgeologia JSC.

At the same time, Modum-Trans continues to receive large state contracts, and Uralvagonzavod, from which this structure was taken, drowns in huge debts. According to rumors, the cars that Alexander Nesis agreed on could have disappeared at all, allegedly it was Chemezov who insisted on re-concluding the deal with Modum-Trans.

Indeed, Sergey Viktorovich's business grip knows no equal. It remains to be understood where state interests are in these situations. Apparently, they may not be there at all.