Without paying attention to the problems of residents, Mayor of Gelendzhik Alexey Bogodistov risks "framing" the governor Kondratiev in the upcoming elections to the State Duma - and then both will not find it "funny".

As the correspondent of The Moscow Post reports, in Gelendzhik of the Krasnodar Territory, they continue to discuss the future of the Head of the city, the protege of the governor Veniamin Kondratiev, Alexey Bogodistov. The day before, a number of unverified sources began to spread negative information about him: allegedly, under the current Mayor, the "free provision of land" on the beaches for commercial activities is flourishing in the resort city.

It would seem that similar rumours have circulated in the city before. However, right now, the city hall is coordinating and approving a new urban development plan. According to the authors of the VChK-OGPU telegram channel, allegedly this time the changes affected the unnamed friends of Bogodistov, who, in accordance with the new document, will be able to claim land in the most commercially advantageous locations.

Despite the fact that this information looks like a "throw-in", it spurred a new wave of discussions about the possible resignation of Bogodistov. It is no secret that over the past month in the municipalities of the Krasnodar region there was a whole special operation of the security forces - or something similar to it. Law enforcement officers visited seven municipal districts and cities at once, and Gelendzhik was no exception.

It is still not clear what exactly the security forces were looking for. Rumour has it that they went through the most odious henchmen of Governor Kondratiev, making the withdrawal of documents. On February 19, it became known about the detention of the Head of the Yeisk district, Viktor Lyakhov, and two of his deputies (according to media reports, one of them was the deputy head of the district for internal policy, Alexander Shabanov). This is written by Kommersant.

As for Bogodistov, he had already talked about the documents withdrawal by the FSB in his administration. Later, he even said that there were three visits of the security forces. Moreover, the latter was allegedly connected with the company Stroyinvest LLC, a structure that built the long-suffering Solnechny residential complex and was involved in a criminal case on three counts of fraud at once. This was written by RBC.

It may seem that Bogodistov himself has nothing to do with the story. But almost immediately, the website of the Gelendzhik administration was attacked by unknown hackers who posted a message on it, allegedly from the Mayor himself. In it, an unknown author, supposedly from Bogodistov himself, announces his resignation. He says that he can no longer lie to people, and also turns to Veniamin Kondratyev with the question of why he is covering him. 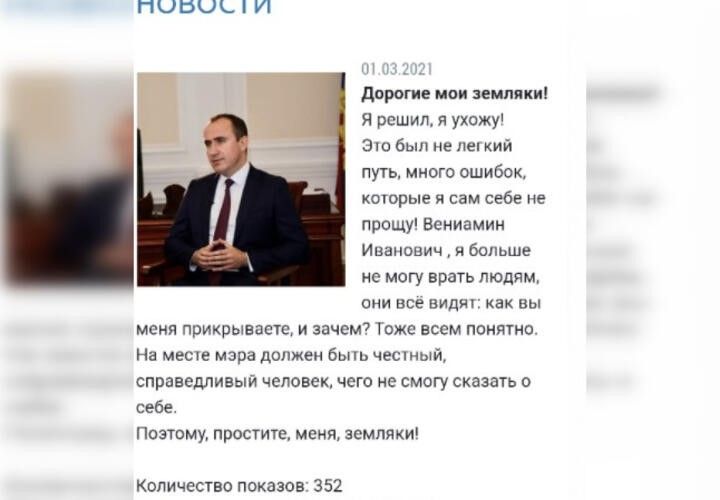 Of course, the hack was detected, and the "fake" message was immediately deleted. However, its screenshots have been preserved, but many residents of Gelendzhik, surprisingly, took it at face value. And some people were genuinely happy about the departure of such a mayor - after all, detractors associate many city problems with him.

Though, the press secretary of Mr. Bogodistov Yanina Skorikova was not happy with such "jokes". After all, this attraction of attention to her boss means attracting attention to her. Moreover, there are rumours in the city that the searches of the FSB may even be connected with her, or rather with her husband Andrey Skorikov and the incredible success of his Red Code security company in the field of state procurement.

That's right: according to Bloknot, with the arrival of Alexey Bogodistov in the mayor's chair in 2018 (and Skorikova, as his press secretary), business at Red Code went up sharply. If before 2019, the structure received 1-2 state contracts a year, now, in March 2021, their number exceeded 180, and the amount - over 100 million rubles. 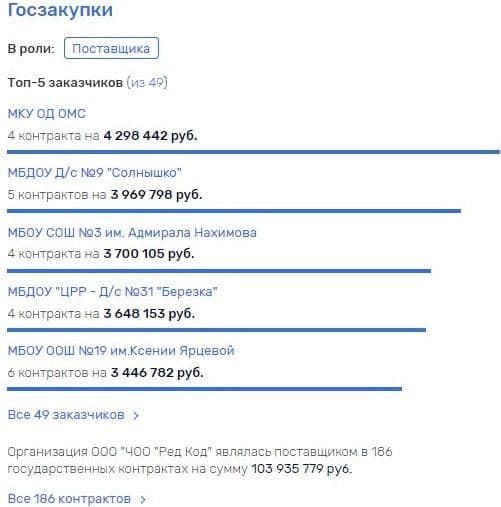 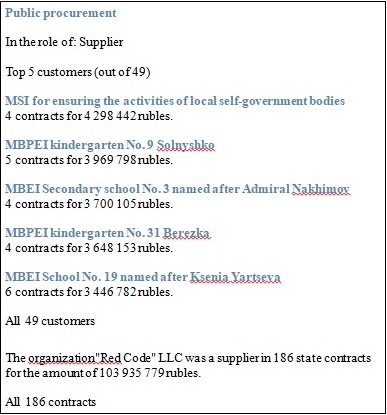 Most of the contracts in the amount of 4.2 million rubles were signed with the Municipal state institution for ensuring the activities of local self-government bodies in the resort City of Gelendzhik. That is, just with the patrimony of Alexey Bogodistov.

Bogodistov's press secretary Yanina Skorikova is also known for another scandal. It just so happened that following the results of one of the online Instagram sessions, the Mayor swore at the head of his press service, which accidentally got on the air. Of course, the next day Bogodistov and Skorikova woke up as social media stars. The situation was described by Bloknot. Apparently, for them, such communication is quite commonplace. But for the residents of the city?

Problems are not solved

However, people, probably, would have accepted the rudeness and rumours that Bogodistov can "pay" his people if at least one of the most difficult city problems under his leadership was solved. But this is not in sight, and the most acute situation is with the water supply.

In the 21st century, in one of the best resorts in our country, Gelendzhik, water often has to be issued on schedule. The nets are worn to the bone. The main water supply system MV-1 - and it is the main source of drinking water for the city - has not been repaired or updated since 1971. The wear and tear of water supply networks is 70%. Other ways have been operating without any repairs for more than 40 years.

Half of the subscribers receive water from the Troitsky water supply network, which is located in Krymsk. The former Mayor of Gelendzhik, Khrestin, promised to modernize this water supply system, the NewsFrol portal wrote about this. Under Bogodistsov, the things are where they started, and this causes real indignation. After all, only in 2019, 1 billion rubles was allocated for the renewal of the city's water supply systems. Where did this money go, why are people still standing at the water pipes?

As if the residents do not have enough problems with water - in winter they complain about problems with heating. At the end of 2020, five streets of Gelendzhik were left without heating. The situation was so serious that the governor himself had to intervene. This was written by Kommersant.

It seems that Bogodistov is not just unable to solve municipal problems - but that the collapsing housing and utilities sector is living its own life, spitting on any subsidies, including federal and regional ones, that are allowed to change the situation.

And how not to pay, people will simply be evicted from their apartments, and the land might be transferred to some friends of the Mayor. Those local residents who dared to run their own small business - to provide rooms in their apartments for rent for visitors, are also under attack. But even here they are "terrified" - so much so that they are forced to turn to the media for help.

The last such scandal broke out at the end of last year, and concerned just the tourist business. This was written by Kommersant. Tired of fighting with the local authorities and not receiving support in Krasnodar, individual entrepreneurs from Gelendzhik, who lease their homes in the summer season, recorded a video message to Russian President Vladimir Putin.

Video message to the President of Russia from the entrepreneurs of Gelendzhik, posted on the Tatyana Bochalova YouTube channel

In it, they ask to protect them from the actions of the city administration, which allegedly forces them to transfer their own homes to non-residential commercial premises. They are registered in these homes together with their children, and what is happening can be interpreted as something similar to the President's popular expression "to nightmare business".

"The administration, referring to the same type and anonymous complaints and Article 8.8 of the Administrative Code of the Russian Federation, which is recognized as inconsistent with the Constitution of Russia, forces us to transfer houses to commercial premises," we can hear in the appeal. But have they heard such requests for help in the very administration, which, apparently, means the City Hall of Gelendzhik?

The Bogodistov Administration, of course, is aware of the situation. But they blame the new legislation, the so-called "Khovanskaya law". The amendments, which came into force in October last year, prohibit the use of residential premises as hotels. But it seems that this rule was not worked out together with people, and is now used as an administrative "club" to take out funds from people. Moreover, in the "wrapper" of legality and concern for the replenishment of the tax base.

This effectively destroys a small private business. But, of course, if we are talking about ordinary people, and not officials denounced by the authorities. According to our sources, the administration of Gelendzhik and Rosreestr officials themselves are engaged in renting out their homes. Some have large hotels located on individual housing construction sites and designed as residential buildings.

No one scares them with courts, no one turns off their gas. They feel themselves comfortable. And none of them, and, first of all, Alexey Bogodistov himself, is neither dismissed, nor even called for talks by the Head of the region, Veniamin Kondratiev.

It seems that the Governor is also satisfied with this local situation. He himself is is not a member of any political party, while Bogodistov is a member of the United Russia party. Why did they suddenly remember about it - because local residents will definitely remember about it, as well as about the regional and city authorities in the 2021 elections. And then both Bogodistov and Kondratiev, will be asked in the Presidential Administration why everything possible was not done to provide people with a decent life.