The construction of a launch complex for Angara on Vostochny was entrusted to Crocus JSC, a company with an ambiguous reputation.

At the very end of last year, the directorate of the Vostochny cosmodrome (part of the Roscosmos state corporation) signed a contract with Crocus JSC for the construction of a technical complex for the Angara space rocket system. Crocus is the head legal entity of the Crocus Group of the famous Russian oligarch Araz Agalarov.

The companies of the latter are contractors for a number of large, strategic projects for our country - the construction of the Central Ring Road, the buildings of the Far Eastern Federal University, and others. In many cases, construction projects were accompanied by corruption scandals and a lot of other difficulties.

What a new row can turn out to be - the correspondent of The Moscow Post in the Amur Region understood.

At the same time, Crocus already has a row on Vostochny. In 2020, the Agalarov structure, also, without a competition, received the right to erect the first stage of the airport complex at the cosmodrome. The cost amounted to 28 billion rubles. It turns out that the structures of Crocus have contracted with Roscosmos in the amount of over 44 billion rubles.

The state corporation led by Yuri Borisov explained the new agreement on the Angara complex with the first contract for the airport. Like, Crocus already has construction facilities on the site, as well as the competencies necessary for such work. Then why did Crocus get the first contract? At that time, the company's strength on Vostochny was not yet.

The second stage of the construction of the airfield will be carried out from 2026 to 2029. It is not difficult to assume that Crocus will also receive it. But will everything be handed over on time and without problems? During the leadership of Roskosmos Dmitry Rogozin on Vostochny, a whole series of corruption scandals thundered, and the introduction of the first stage of the space harbor had to be postponed due to the identified shortcomings. 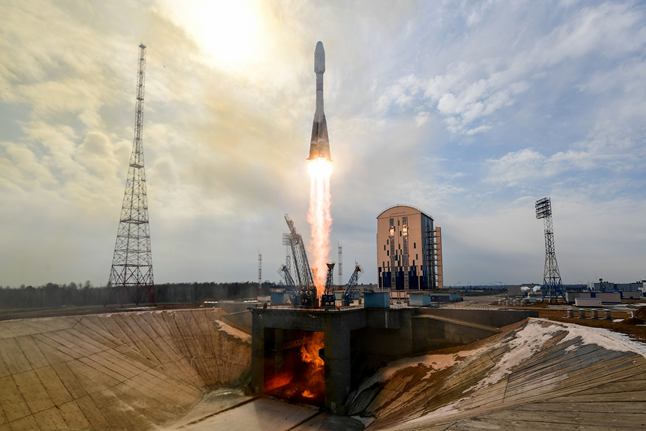 This happened before that - in 2018, serious defects were revealed on the starting table of Vostochny. Experts found leaks of concreting joints through the formwork attachment holes, and also found violations at the central distribution point, where welding was used to connect the reinforcement instead of the coupling.

The roof from "Crocus" gave a leak

It seems that Yuri Borisov wants to join the dubious fame of the former head of the state corporation Rogozin: a large number of problems are associated with the projects that the group was implementing, some of which were accompanied by criminal scandals.

One of the notable cases is the egregious situation with the buildings of the Far Eastern Federal State University (DFSU) on Russky Island near Vladivostok. The construction of the campus has become one of the largest projects in Russia over the past 20 years. The general contractor for the construction was Crocus Group Araz Agalarova.

Initially, the declared construction cost of 55 billion rubles quickly increased to 68 billion. In 2012, the APEC summit was held there, and in 2022 - the Eastern Economic Forum with the participation of Russian President Vladimir Putin, who, together with other officials and guests, lived directly in the buildings of the DFSU.

It was then, last September, that a big scandal erupted. It turned out that the roof of the campus leaks in many places, and people were forced to sleep, as it seems, almost in half-damp rooms.

Then a document got on the Web - an official letter to the adviser to the President Anton Kobyakov on behalf of the acting Head of the DFSU Boris Korobets. The letter said that these negative consequences (leaks) are the result of the destruction of the enclosing structures - roofs, facades and stained glass windows, and cannot be eliminated by the university itself. Including, even with the involvement of funds allocated annually for the organization of the forum, and this is about 200 million rubles. 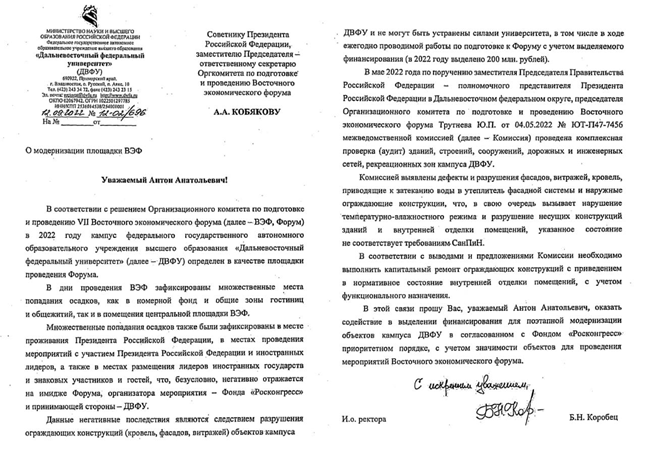 Thus, it can be assumed that "Crocus Group" Agalarova could hand over from the most important construction projects of the country with defects laid down in it. Perhaps we could talk about low-quality materials, which is very strange, given the colossal cost of construction. Will the shortcomings really have to be corrected at the expense of the state in hundreds of million rubles?

Experts and law enforcement officers should understand this. But if this could be allowed at the DFSU, can this not happen at the construction site of the complex for Angara and the airport on Vostochny? Only in the case of space launches and transport can this lead to much more serious consequences, considering the likely death of people.

It is noteworthy that after the completion of the DFSU, Araz Agalarov himself mentioned that he did not like to implement the project on Russky Island. Allegedly, the structure did not earn anything at this construction site, and even spent its own funds - on the construction of the road and the improvement of the territory for 3.6 billion rubles, of which the Ministry of Finance allegedly returned only 1.1 billion rubles.

It is very difficult to believe that a large Russian oligarch at a construction site at state expense could go into the red.

Other large construction sites of Crocus could not do without problems. Another landmark project of national importance is the construction of the Central Ring Road (TsKAD) around Moscow, where the oligarch's company acted as a contractor for the first stage.

According to Life.ru, the company actually disrupted the construction, the delivery of the facility was constantly postponed. Huge claims to the work of Avtodor, as a customer, and Crocus International JSC (a subsidiary of Crocus Group), as a contractor, arose from the Accounts Chamber of Russia.

The auditors considered that the funds allocated for the implementation of the project from the National Welfare Fund were spent inefficiently, which led to an increase in the cost of construction rocks.

In addition, Crocus Group attracted many subcontractors who could receive real pennies for their work. About this writes the news agency "Construction Business."

Apparently, Crocus Group mastered the money, but something did not work with the work, which allows us to suspect a corruption component in the situation. And such a scandal soon erupted - the former head of Avtodor Sergey Kelbach, who signed a contract with Crocus and was responsible for transferring funds to the company, was already under investigation.

Kelbach was suspected of abuse of office. According to investigators, he illegally agreed on the payment of a bank guarantee in the amount of 3.9 million rubles, and two years later agreed on the illegal provision of Crocus International JSC an additional advance of 2 billion rubles. About this write "Arguments and Facts." 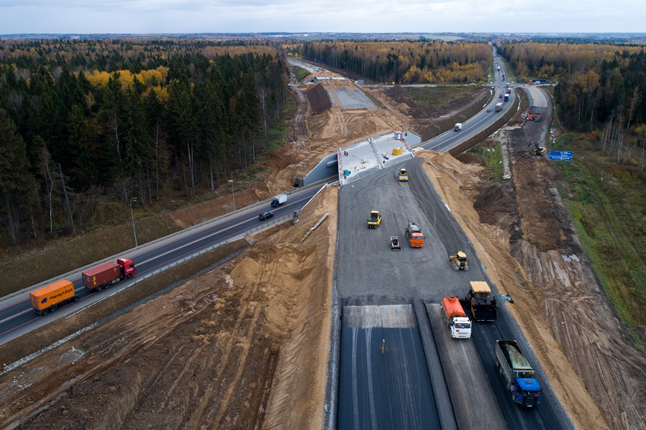 In total, 48 billion rubles were allocated for the work of Crocus in the Central Ring Road. The total cost of construction, initially estimated at 300 billion rubles, as a result significantly exceeded this amount.

Legal proceedings began between Crocus and Avtodor. The state-owned company presented claims to the oligarch's structure for 5.4 billion rubles.

Moreover, the structures of "Crocus" are regularly received by the lord. The total amount of Crocus JSC, which will be built on Vostochny, with new orders exceeded 61.5 billion rubles. 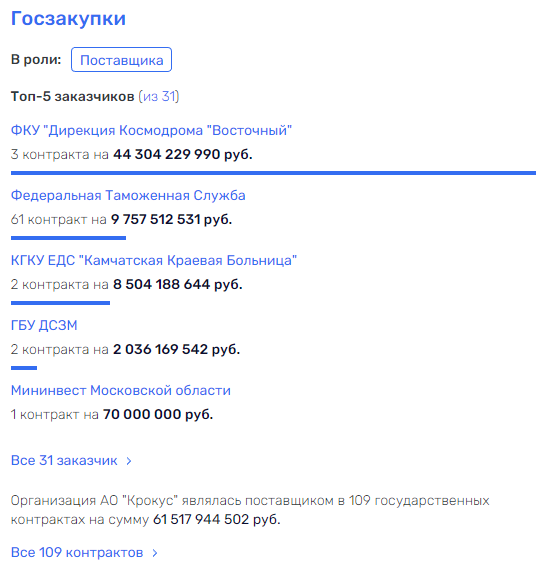 At the same time, the financial situation of the company appeals to big questions. At the end of 2021, it showed a loss of 5.8 billion rubles with revenue of 44 billion. According to Forbes, the profit received by Araz Agalarov's Crocus Group is now enough only for servicing loans, the amount of which leaves 120 billion rubles. It is the lords who help him to stay afloat.

It turns out that Russian officials are busy saving Araz Agalarov's business. But what about efficiency, implementation of strategic projects and high quality of work?

It seems that the head of Roscosmos, Yuri Borisov, is not very worried about this, because he should be aware of the situation with the Crocus Group business. And this, in turn, means that the construction of Crocus on Vostochny may end in a large saw.