While Governor of the Moscow region Andrey Vorobyov, continues to make promises to end landfills, residents are also suffocating and drowning in waste, and multi-billion-dollar "litter" contracts are received by companies allegedly close to the head of the region.

Moscow region Governor Andrey Vorobyov has been running the region for seven years, and all these years he has been "fighting" with landfills near Moscow. More precisely, people who live near landfills are fighting, and Vorobyov only keeps  making loud promises to cope with litter and reclaim landfills. As the correspondent of The Moscow Post reports, the other day he again promised to close the landfill in Yadrovo, which has been poisoning residents of Voloklamsk and nearby settlements for several years.

It all began with a seemingly good idea - to reduce the number of landfills and carry out reclamation of the area. However, according to evil tongues, this was allegedly done not for the benefit of people, but in order to tie up multi-billion-dollar contracts for the transportation of waste to companies, according to rumors, close to Moscow officials and Vorobyov himself.

It is rumored that it was Vorobyov who pushed the decision that the largest regional operator for litter removal in the Moscow region was RT-Invest, a subsidiary of Rostec state Corporation of Sergey Chemezov, close to the family of former Russian Prosecutor General Yuri Chaika.

Controlled by RT-invest, LLC Ruzsky regional operator, LLC Kashirsky regional operator, and LLC Rastrim-MO took over the waste in three clusters for more than 2 million tons per year, or about 60% of the total volume in the Moscow region. It was written about by Kommersant. If Vorobyov "agreed" with Sechin and the Chaikas, then on what terms for himself?

As a result, taking into account the reduction of landfills, litter was taken out to a limited number of places like Yadrovo near Volokolamsk and Kuchino near Balashikha. They also began to take them from Moscow. Why not, if Mayor Sergei Sobyanin generously pays 3 thousand rubles per ton? The result is known-mountains of litter that have to be transported for more than 100 km, gases, stench, unrest of residents.

Now a new farce comes - reclamation of overcrowded landfills. For these purposes, the authorities were able to allocate as much as 20 billion rubles. This was also reported by Kommersant. How many of them can settle in the pocket of the Head of the Moscow region?

Things are right where they started

The story of long-suffering Yadrovo has been dragging on for several years. The situation got out of control in March 2018, when several children of Volokolamsk were poisoned by gas emissions at the landfill, they had to be hospitalized. The district has introduced an emergency mode. The locals, tired of searching for the truth in the suburban officials appealed to President Putin with a request to close the landfill. RBC wrote about this.

According to people who are tired of mountains of litter and the smell of hydrogen sulfide, the landfill was operated with gross violations of the law, had a negative impact on the environment and "causes fatal harm to residents of the city".

It also came to mass unauthorized protests, the largest of which took place just in Volokolamsk in March 2018. Then Vorobyov himself came out to calm people down.  He heard a lot there concerning himself! Therefore, he made promises and quickly retreated. 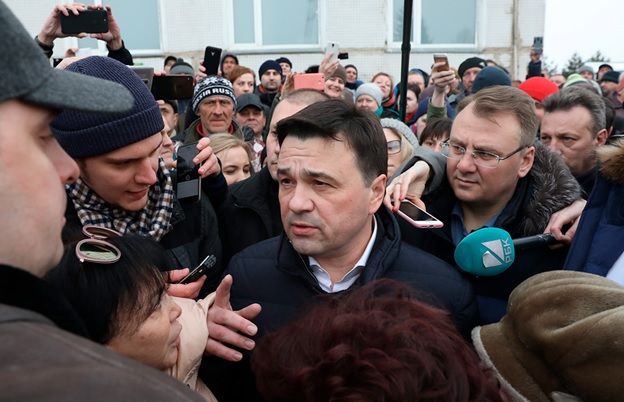 Andrey Vorobyov at an unauthorized rally in Volokolamsk

In the end, nothing was really done. In April, mass unauthorized rallies were held in seven cities of the Moscow region at once, Kommersant wrote. But Vorobyov was already afraid to show himself on them. The stench from Yadrovo also did not become less. To promise is not to marry?

As follows from the message of the authors of the site Sovershenno Sekretno, allegedly since 2013, when Vorobyov became the Governor, litter removal to Yadrovo has increased to 200 thousand tons, that is, ten times. At the same time, according to rumors, litter just continued to be dumped in a sand pit, and the Yadrovo LLC company, which served the landfill, still does not have an approved sanitary protection zone and continues its activities even today. What kind of reclamation are we talking about?

The office itself raises many questions. As part of the founders, 25% is registered with the administration of the Volokolamsk district, so the termination of the company's work was clearly not part of the plans of officials. Maybe that's why Yadrovo has got state contracts for more than a billion rubles?

The remaining 75% - has got the muddy office of Vesna LLC with the authorized capital of only 30 thousand rubles. With three employees, the company has no revenue or profit, and 47% of its authorized capital belongs to the no less suspicious CMPT LLC, which was previously associated with then Head of the administration of the Volokolamsk district Yevgeny Gavrilov. Rumored to be a protégé of Andrey Vorobyov.

Only one employee works in CMPT and with a profit of 41 million for 2019, the book value of its assets is listed as zero. It looks like a fictitious organization through which millions of rubles can be withdrawn. Moreover, its governing body was not located at its legal address, and the information was unreliable. 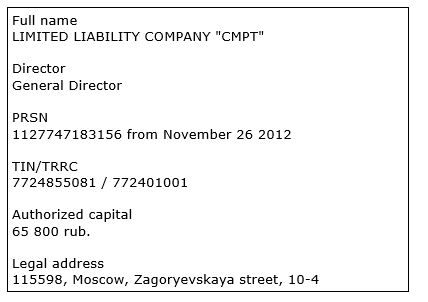 Moreover, earlier CMTP had a number of subsidiaries that also had signs of fictitiousness and were engaged in litter disposal. It looks like a multi-level structure, where several companies control the entire process of waste management, very possibly in the interests of specific officials. 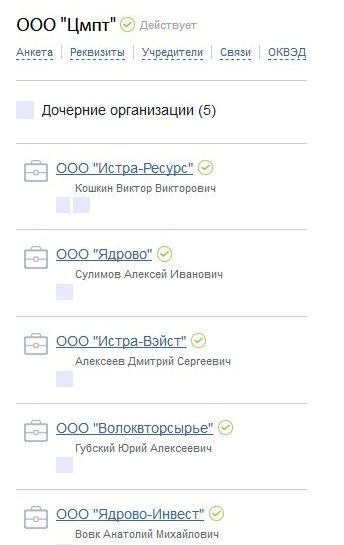 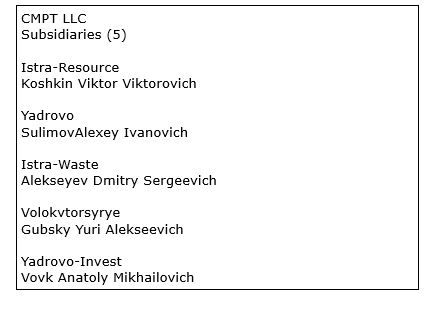 Another headache of people is the litter landfill in Kuchino near Balashikha. It was also closed only after an appeal to President Putin on his direct line in 2017. However, people who smell the stench and watch the mountains of litter under Balashikha with their own eyes still have a lot of questions - what about reclamation?

Then the owner of the landfill, the Zagotovitel CJSC allegedly even filed a lawsuit of $6.2 billion. The General contractor of reclamation, Ecocom LLC then "was given" contract for 4 billion rubles from the Ministry of Ecology of the Moscow region. But there's no sign of it now. Where did the budget billions go?

Ecotechprom, which is owned by the Moscow city property Department, works closely with Ecocom. May it be the reason why Ecocom has state contracts worth 1.3 billion rubles, and the third largest one considering the orders volume in the amount of 240 million rubles is the Administration of Balashikha?

According to rumors, Zagotovitel in the past committed a number of violations, working on the ground near Balashikha. As a result, the organization in the form of a CJSC was liquidated in 2013, and a new Zagotovitel LLC appeared in its place. Thus, the company did not incur any liability. But such metamorphoses, apparently, did not bother young Governor Vorobyov at all.

Vorobyov was not confused by the Moscow region authorities and the presence of offshore companies as part of its founders. It turned out that it was tied to 4 foreign offices at once, where billions of budget rubles could flow. All of them are from the Seychelles. And this office has billions at a time when the whole business with the initiative of the President carries out the de-offshorization of the domestic economy.

In addition, it was rumored that previously the co-founder of Zagotovitel was a certain "authoritative" businessman Aleksandr Solomatin, as if the brother of allegedly close to the criminal circles Grigory Solomatin. Evil tongues gossip that the connection between them and the administration of Balashikha could be carried out by another "authoritative" person, Anatoly Petrov, known in certain circles as "Petrukha".

The same person could help the former mayor of Balashikha, Yevgeny Zhirkov, take up the post. by the way, the last one left Balashikha, again in 2017 because of the Kuchino landfill. However, Vorobyov quickly "warmed" a close official, putting him as the Deputy of the Pushkinsky district of the region for housing and utilities.

Though he ded not stay there for a long time - in 2019, he was arrested. This was reported by  TASS. The investigation believes that the official transferred the delivery of an apartment building, for which he could get ownership of non-residential premises from the developer.

Another pain point of the entire Moscow region today is the Ruzsky city district, part of which was recently washed away due to the break of the dam in Ruza, which has not been repaired for years. Andrey Vorobyov had to go to the place again, and there to listen not only about this emergency, but also about problems with litter. Here everything is the same - a dump where waste has been taken for tens or even hundreds of kilometers, the stench, reclamation only in words.

According to the authors on the Odintsovo INFO portal, allegedly in the autumn of 2018, residents of the district went to mass unauthorized protest actions against the construction of a new litter dump near the city of Tuchkovo. There is a school nearby and artesian wells that supply water to local residents.

Then people said that the district authorities began to use a quarry near the city for a dump. Something similar, as mentioned, could happen in the case of Yadrovo. A proven scheme to deceive people? As a result, the Head of the Ruza district Maksim Tarkhanov had to resign from his post. It seems that this was a sacred sacrifice, because things are right where they started.

Only God knows how long Vorobyov will keep promising to solve the litter problem in the Moscow region. This business is too profitable. Judging by the growth in income of Vorobyov himself, he may agree with this statement. According to his Declaration for 2014, he earned only 9.3 million rubles. Not bad.

But a year later, in 2015, after the conclusion of contracts for the same Kuchino, his revenue was already 27.7 million rubles. At the end of 2018, Vorobyov already earned 95.6 million rubles. This was written by the Regnum publication.

As we can see, his profit is growing almost exponentially. And all this against the background of rumors about affiliation with litter and construction firms. After all, there is the Samolyot GC, which, according to rumors, is very close to the family of the head of the Moscow region. The company receives the most delicious plots of land in Moscow and the Moscow region year after year, building it up with elite housing.

At the same time, residents of the region continue to poison themselves with gases, hydrogen sulfide, and other poisons, drowning up to their knees in litter. The reform initiated by Vorobyov in the Moscow region with a new scheme for waste removal looks like a large-scale operation for cutting money.

Vorobyov himself, at the same time, they say, does not think to continue his career in the region in the future. Allegedly, two terms will be enough to earn a decent old age, somewhere in the power structures. But will this make it easier for residents of the Moscow region to breathe?

18 August, 7:05
Taking billions or where the head of MIC Andrei Ryabinsky got ready