State Duma deputy Anatoly Karpov may be behind the attempt to get the "Abakan mine". Thus, he can "help" Senator Zhukov to maintain control of the enterprise, while he himself owns a bunch of companies on dubious grounds.

As the correspondent of The Moscow Post reports, the head of Khakassia, Valentin Konovalov, apparently wanting to earn political points and keep the reeling chair of the head of the region, announced his intention to appeal to law enforcement agencies. He believes that there is a risk of a raider takeover of the Abakan Mine LLC which is in process of bankrupting, an application for the acquisition of which was submitted by Elfan Ramazanov, an assistant to the State Duma Deputy Anatoly Karpov, an outstanding former chess player.

The latter, as they say, through Ramazanov wants to help keep control of the enterprise to the senator of the Federation Council Anatoly Zhukov. Of course, if there is even a drop of truth in this, then it is unlikely that he will do it out of the kindness of his heart, most likely, counting on a solid "compensation".

Zhukov also owns 40% of the company through Abazinsky Rudnik LLC, which owns 100% of the Company's shares. This is the city-forming enterprise for the city of Abaza. At the same time, according to Kommersant, the senator's shares have been in trust since 2019. This is easily confirmed through the records in the Unified State Register of Legal Entities, which indicate that Mr. Zhukov lost the right to act without a power of attorney only in 2019.

Everything would be fine - he must legally transfer the shares to the trust management. If not for one "but". Zhukov was elected a senator of the FC in 2019, and before that he, like Karpov, was a deputy of the State Duma of the 7th convocation. And he has been there since 2016. And in the same year, he became the owner of Abazinsky Mine LLC. However, if the information on the Rusprofile service is believed, he did not transfer his shares to the trust management at that time. Does it mean that he became a deputy of the State Duma and immediately got a business?

Even worse is the situation with the mine itself, which is in a bankrupt state with a "hole" of losses of 179 million rubles. It turns out that for four years of ownership, Zhukov failed all the work on the development of the enterprise, and now hundreds of people can be desmissed. As if they were some kind of "pawns" in this game. And at the same time, can Mr. Karpov make a move with a "knight" in the interests of another influential person?

Why, after all, most likely, Karpov? Because it is not clear where Elfan Ramazanov could have taken the funds to buy the mine at all. Back in 2013, there was information that the assistant to a State Duma Deputy had two buildings arrested for debts. Allegedly, the debtor, who owed 3 million rubles on the loan, refused to pay, hiding behind his official position. In relation to the Assistant Deputy enforcement proceedings were instituted, the Department of the Federal Bailiff Service of the Kemerovo region reported.

Bailiffs were forced to arrest two administrative buildings in Mezhdurechensk, which belong to the debtor. The department said that "the debt will be recovered despite the scope of the debtor's activities," and "such behavior of the Assistant Deputy of the State Duma only casts doubt on his high status." This was written by the А 42 publication.

According to evil tongues, allegedly, there may still be enforcement proceedings against Ramazanov today. Karpov has an interesting assistant. Where could this come from, if not from the chess boss?

The situation is even more wild, taking into account that Karpov, it seems, is following in the footsteps of Mr. Zhukov. In the sense that a number of of businesses is written on him. He is the founder of 15 organizations at once, only 6 of which are not active. Nine structures are active. But the shares of the State Duma Deputy are not in the trust management at all. And what, no violation of the law? Is everything all right?

For example, Masterskaya Karpova LLC. A small company, where the Deputy owns 33% of the shares. But they are not in trust. And silence. Against this background, even the absence of the structure of assets and the only employee in the state pales.

More interesting is the situation in MPS Invest LLC, where Karpov also owns about 33% of the shares. The structure is engaged in the lease and management of its own or leased real estate. And the difference is that the structure operates with millions of revenues and profits, just as it does not have any asset value, and with only two employees in the organization's staff with 10 thousand of the authorized capital. 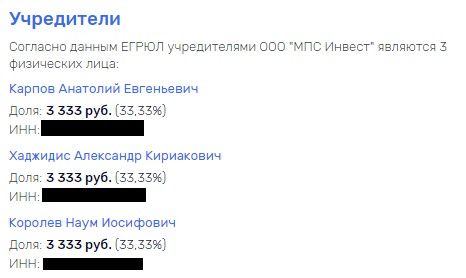 The same can be said about the shares without trust management, the small number of employees, the lack of assets and the small authorized capital of Centre for Independent Forensic Examinations TECHECO LLC. But all this pales against the background of many other scandals around Karpov, which thundered back in the 90s and 2000s.

Back in 2007, the Petromir company, about which no one had heard anything before, suddenly received the largest Angara-Lena gas field in the Irkutsk region. Reserves - 1.2 trillion cubic metres. And it was Anatoly Karpov who was behind the creation of this company, who told the same Kommersant about his Napoleonic plans for the gas market.

Why Karpov needed gas is a question. Today, there is no Petromir in the list of established companies. Even then, evil tongues assumed that the chess game was played by Karpov's hands by completely different people, for whom gas is a profile business. Is Karpov contributing? And is the situation with Abakan Mine the same this time ?

According to the authors of the Compromat.ru website, allegedly behind Karpov could be influential forces from Gazprom. Here is what the authors write, literally: in 2002, Anatoly Karpov created Service Elite LLC, co-founded by Vladimir Dedikov (born in 1938). Coincidentally, Yevgeny Dedikov was the son-in-law of the former all-powerful head of Gazprom, Rem Vyakhirev.

Yevgeny Dedikov, together with Viktor Sokolovsky, Yuri Goryainov (former member of the Gazprom Management Board), Yuri Kintsler (former Deputy Head of the Gazprom Capital Construction and Transport Department) and Sergey Dmitriev, founded CJSC Tsentrgazstroy and CJSC Yamaltsentrgazstroy in 1996. The first company was engaged in trade and procurement operations. The second is the development and development of oil and gas fields. Its co-founders were Gazprom's subsidiaries - Nadymgazprom and Tsentrgaz (Tula).

Relatives and friends of the former top managers of Gazprom earlier also allegedly owned the companies that were associated with Petromir. For the development of the Angara-Lena field, the company has established a firm called Petromir-Bureniye. Part of it belongs to Stroytransgaz-Oil, a subsidiary of oligarch Gennady Timchenko.

That is, Karpov could simply do a favor to influential people, and they could remain in the shadows. And, it may well be that not for nothing. The game is played out perfectly, is everyone happy?

Another scandal with Karpov is associated with the struggle for the post of president of FIDE. Allegedly, Karpov, in the absence of the leadership of the Russian Chess Federation, gathered a group of his supporters from among the chess functionaries, who made a decision of dubious legitimacy to nominate Karpov to the post of head of FIDE. True or not, he never took over the federation.

Another dubious story is connected with the creation of a project for the production of people's cars, which from the very beginning looked like something of a scam. According to the authors of the Compromat.ru website, allegedly in 2003, Karpov and his partner from Perm, Konstantin Kurchenkov (who in certain "authoritative" circles could be known by the nickname "Kucheryavy") created JSC Mishka-Tula-Moscow. Together, they owned a 66% stake there.

According to rumours, then Tula Governor Vasily Starodubtsev, tempted by the idea of issuing ultra-cheap (cheaper than "Oka") economy cars called Mishka, transferred to the property of "car manufacturers" empty premises of Tula combine plant (cost about 18.6 million).

At the same time, the founders announced a fundraising campaign to create a "people's car accessible to veterans and young people." Anatoly Karpov, posing in front of the TV cameras in an embrace with the governor, personally laid a symbolic slab on the territory of the future assembly complex.

From all over Russia, a lot of money flowed to the creation of the people's car, which was donated by entrepreneurs and even ordinary people. However, people's car "Mishka" did not appear, and where the money of the donators went - it is still unknown. Somehow that was not very nice of Anatoly Yevgenyevich.

Summarizing all of the above, it seems that the reputation earned by Karpov during the years of dominance in the chess arena has long since evaporated under all the scandals associated with him. But he still has the chess acumen, strong logic, and the ability to achieve his goals, ahead of his competitors by several steps. 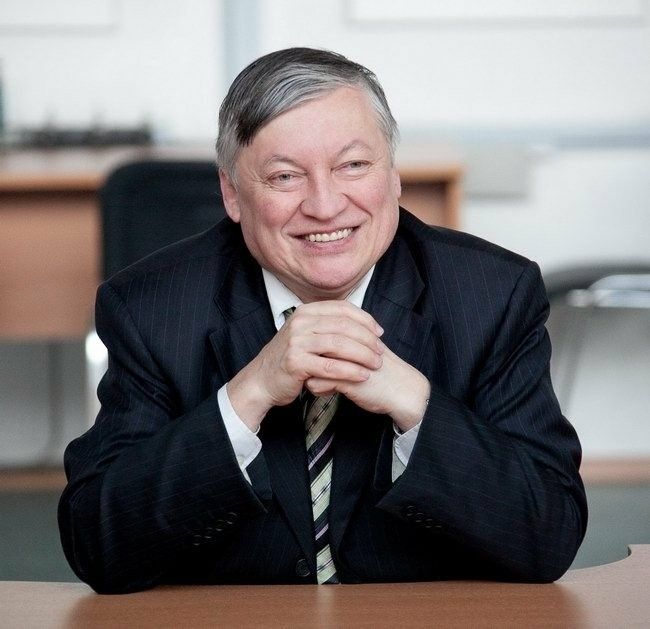 Did Anatoly Karpov play the game as if by the notes?

Today, the "victims" of such a "swap" can be 750 employees of the Abaza Mine. But no one will be surprised if it turns the State Duma Deputy and influential businessman Anatoly Karpov does not care at all about their fate. Needless to say, while the grandmaster makes a "knight move", the "pawns" must be in the stall.