How does Krasnoyarsk Governor Alexander Uss "divide" the granite of science at the Siberian Federal University?

According to the correspondent of The Moscow Post, the Accounting Chamber of Russia revealed noncompetitive purchases of capital construction services for 4.4 billion rubles and other violations at the Siberian Federal University (SFU), as well as violations for another billion rubles. Under Alexander Uss, the temple of science turns into the temple of "division"?

The fact is that for 10 years the President of this largest University in the Eastern part of Russia is the head of the Krasnodar territory. One of the most unpopular governors not only in the region, but also in the Presidential Administration. They say that very soon Governor Uss, who has worked less than three years, will be "asked".

As Ura,ru writes, he was in the top 5 of the Kremlin anti-rating of governors on the level of trust due to natural disasters that occurred in the region. People did not appreciate the inability to ensure their safety, organize compensation payments and rehabilitation work.

Under Uss, people continue to leave the Krasnoyarsk territory, and the economy is stagnating amid rumors of large-scale corruption among officials at all levels, including the head of the region. In this context, the conclusions of the auditors of the Accounting Chamber may put an end to the further political career of Alexander Uss.

They can also lead to more drastic changes in his life. The materials will be sent to the Prosecutor General's office and the Federal Antimonopoly Service. Copies will also be received by all relevant ministries and both houses of Parliament - the State Duma and the Federation Council.

This is very bad news for Uss. Such actions can be regarded as a waste of budget funds. We are talking about 9.1 billion rubles allocated to the SFU for the capital construction of facilities for the all-Russian winter Universiade 2019 in the period from 2014 to 2019.

The money was allocated under Federal programs, including the national project called Obrazovaniye (Education). But it turned out that only about half of the 122 were competitive - purchases of about 4.4 billion rubles, as well as other violations of another billion. 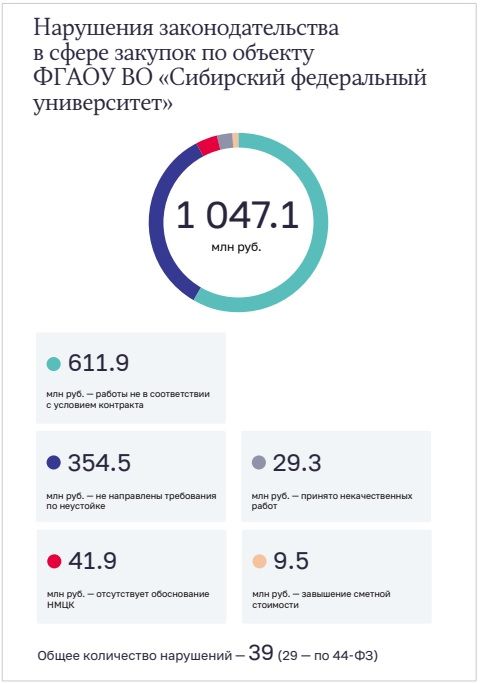 The report of the Accounting Chamber states that in general, violations with signs of causing material damage to the economic interests of the Russian Federation were detected in the University's facilities.

Moreover, as follows from the message of the authors of the Babr.24 website, allegedly already 11 employees of the SFU are being pre-investigated. The first Vice-rector for Economics and Development Pavel Vcherashniy, the chief accountant of the University, the head of the legal Department and other important managers may be among those who came to the attention of the security forces.

The most curious thing is that the security forces visited the University in November last year. This was written by the Regnum publication. Then searches took place in the office of already mentioned Pavel Vcherashniy, and he was detained. 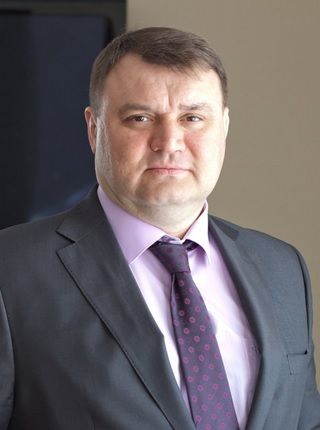 Vcherashniy was suspected of corruption. This is reported by the Prospect Mira publication. Previously, there was information about the initiation of a criminal case against a certain Pavlov, allegedly associated with ex-rector Yevgeny Vaganov and Pavel Vcherashniy, which featured part 4 of article 159 of the criminal code of the Russian Federation (fraud).

However, according to rumors, the whole thing was put on the brakes due to the intervention of Alexander Uss. Despite this scandal, Vcherashniy continues to work quietly at the University. It is rumored that in March 2019, he even became the Executive Director of the Uss’ Foundation called Siberian Club. Is Vcherashniy an important element in the possible "schemes" of Krasnoyarsk Governor?

Meanwhile, the University has rapidly refuted any claims against itself. They said that 95% of the money was spent through open auctions and contests, and only 5% were contests where only one bid was received. But according to the Accounting Chamber, almost half of such contests were held. What's the discrepancy?

It is rumored that the University will try to get out of this situation with the help of Uss. Because otherwise, its leadership will very much frame the Governor, who clearly does not want to be involved in this scandal.

As follows from the message on the Babr.24 portal, allegedly contracts for paid services were issued between the University and all the persons involved in the pre-investigation check. Acting rector of SFU Vladimir Kolmakov hastened to state in a letter that these employees performed work that is not provided for in their employment contract.

It seems that one of them can be made a "switchman" in order to take the threat away from more serious figures. As a result, they may try to put the brakes on the scandal. We have also seen this in Russian and international practice more than once.

However, there still remain a lot of questions to Uss and other leaders of the Siberian Federal University. If almost half of the contests were held without competition, which companies received these multimillion contracts? And are they somehow connected with the leadership of the University, the threads from which can stretch to the Governor of the Krasnoyarsk territory? 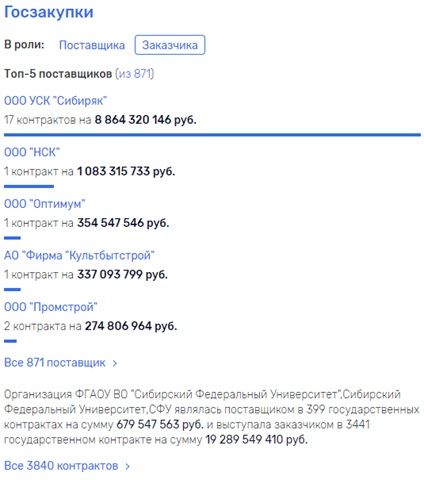 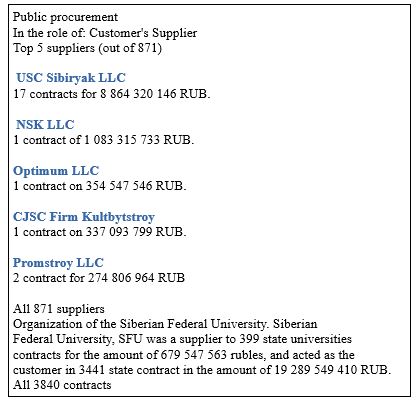 NSK LLC with the authorized capital of only 10 thousand rubles is owned by a certain entrepreneur Alexander Monastyrshin. He doesn't own or manage any other companies. Today, NSK, despite a billion-ruble relationship with SFU, is in bankruptcy. At the end of 2019 - zero revenue, a loss of 8 million rubles.

There is a question - isn't NSK an intermediary for the withdrawal of funds from state contracts received dishonestly? Which is eliminated after the operation is successfully completed - so to speak, to hide the ends in the water? However, this is only an assumption. The owners of Sibiryak, Vladimir Yegorov and Ekaterina Kochetkova, may also be associated with the same Uss.

One way or another, Alexander Uss will have to answer these questions. And also the questions and complaints of residents of the Krasnoyarsk territory, in which Uss does not normally solve any problem for the third year.

People have not forgotten how openly ugly he behaved with his own constituents during a visit to the flooded city of Kansk last summer. Then the inhabitants of Kansk, who were left with almost nothing because of the flood, were asked: "What do you want to tell me? Demand your rights? I can demand too!"

Video of Alexander Uss' communication with the residents of Kansk, published on the Kryzhopol Kryzhanovsky YouTube channel

As we remember, the problems of Uss were not only in communication, but also in the payment of compensation and restoration work in the flooded settlements of the region. But the Governor doesn't seem too concerned about it. It is rumored that he continues to live without denying himself anything. And perhaps - at the budget expense.

There is a scan of a certain document in the internet, which is presented as a receipt for the Corinthia hotel in St. Petersburg, where Alexander Uss allegedly lived during a business trip in 2018. For 4 days of stay in the Northern capital, the hotel was paid more than 400 thousand rubles – an average of almost 100 thousand per day. 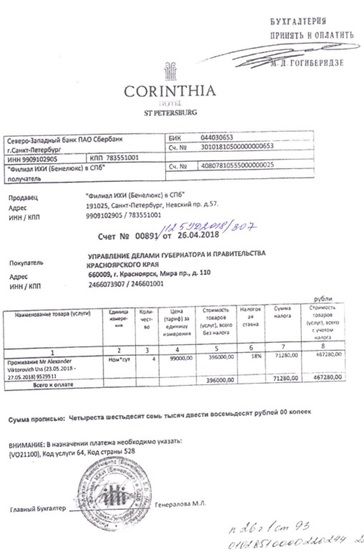 Not bad! Apparently, Uss prefers to save his own money for expensive hotels until his resignation from the position of the Governor. According to rumors, his wife, Lyudmila Uss, is also not without sin, and is actively engaged in business under the cover of her influential spouse.

Allegedly, she has a share in JSC Krasnoyarsk LesoMaterialy, which is engaged in cutting and exporting wood from the region. Andrey Karpov was previously listed as the official owner of the structure. Professor, and part-time adviser to Alexander Uss.

So even if Alexander Uss is involved in some fraud at the Siberian Federal University, this may not be the only source of his earnings. However, it is unlikely that he will have time to spend this money, if this time the scandal in the SFU is not put on the brakes.