"Ace up the sleeve": Zimbabwean secret of Lipetsk governor

Redistribution in Zimbabwe, "dissolved" money, "shadow" bankers and gold mines - how is Governor Artamonov and his former deputy connected with this?

As the correspondent of The Moscow Post in the Lipetsk region reports, the former vice governor of the region Ilya Tuzov supervising construction of roads is put on the international wanted list. According to the investigators, at the request of the official the specific contractor ("Ruslan-1) won at an auction though the application of firm exceeded proposals of competitors for 33.5 million rubles – Kommersant writes.

Friends "to a coffin"

Ilya Tuzov worked in the Government of the Lipetsk region in 2019-2021. He was a member of the team of the native of Sberbank Igor Artamonov who headed then the region. With which, say, I got acquainted through the father – the jazz musician who taught Artamonov to play at the time a saxophone. It allegedly also brought together together two politicians, and was help for receiving the vice governor's position by Tuzov.

But mister Tuzov appeared in hands of law enforcement authorities not one: in 2019 on the same business, as it now, detained the head of department of roads and transport of the Lipetsk region Valentin Malakhov – Kommersant reported. And the governor Artamonov, turns out, neither a dream, nor spirit? Perhaps, questions at law enforcement authorities will appear also to him?

Among partners there are Tuzova and Artamonova call Alexander Vygolovsky who was once holding a post of the vice president of Premieres credit bank. At the same time the beneficiary of bank try to present Ilya Rayevsky - the defendant in the case about murder of the first deputy chairman of the Central Bank Andrei Kozlov. After Rayevsky tried to make responsible on suspicion of plunders what I wrote RBC about.

It is rumored that "shadow" partners of the governor of the Lipetsk region and his protege to whom those allegedly give the energy companies of the region are bankers Konstantin Drachuk and Pyotr Chuvilin. The last was a person involved in criminal case – Kommersant wrote.

Tuzov's identity, as it turned out, is much more interesting, than it was possible to assume at first sight. He worked hard abroad – from 2005 to 2015, including in the international investment banks. In the Russian bank segment I managed "to hook" on Alfa-Bank, Sberbank and Raiffeisen bank. Before going to policy, he worked in Africa – and is more specific – directed the Liberation Mining (Pvt) Ltd coal company in Zimbabwe.

The director of this firm at the moment (as well as then) is Victor Tskhovrebov, there in 2018 there was "sharing". The point is that its shareholders argue among themselves on financial questions. The Russian investor of IR Trading filed a lawsuit the statement for transfer of the 49 percent equity stake to local partners according to the certified agreement.

The Zimbabwean side claims that if within the first year of IR Trading it doesn't fulfill the obligations at first of operations and to investments into infrastructure, local partners will receive back all shares of the company without any conditions.

IR Trading in return considers that it already fulfilled all obligations and conditions which are laid down by local partners don't exist and are fraudulent as investments.

Russians said that local partners showed inexpressible dishonesty in the transaction and first of all ignored the signed agreements – wrote the Business Times edition.

Problems of the company with regulatory authorities which constantly change requirements to the project of firm because of what her work is stopped are added to it – The Sunday Mail reports about it.

Taking into account that all history began when Tuzov still worked in the company, there are all bases to believe that the events infringe also on his interests.

From Russia – with love

It is interesting that the director of Liberation Mining (Pvt) Ltd Tskhovrebov is a native of Renaissance Capital where was registered as the analyst, he also represented the interests of the Canadian firm Kola Mining as its president and the CEO.

Besides, mister Tskhovrebov has eight years' experience as the director and the specialist in questions of investments and also the analyst of the stock market of large Russian transport company JSC Sovfrakht.

Kola Mining in 2009 acquired the right for gold mining on the Bogunayevsky field in Krasnoyarsk Krai, just when Tskhovrebov became the director. The company then redeemed LLC Artel of Gold Prospectors Angarskaya proizvodstvennaya kompaniya (EXPERT of the agrarian and industrial complex) owning the license for mining.

Since 2013, according to Rusprofayl, finance of this company was on zero. In 2015 the revenue jumped up to 4 million rubles – probably, good there was that year "a gold harvest", but next year the finance again "started singing romances". 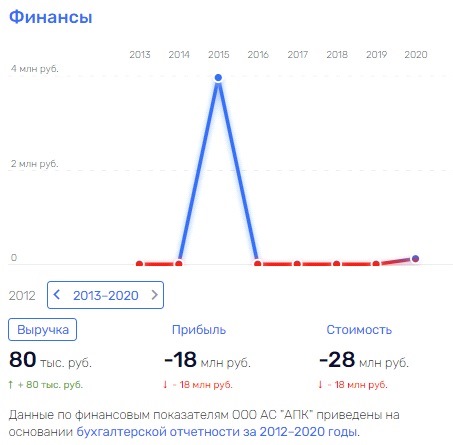 At the same time, the founders from 2015 to 2017 included the Cypriot offshore EVOLUTIONX LTD. It was created in 2017 and liquidated, judging by data from the Cyprus register, in 2021. All data about the company and its directors are erased. Another washing story? And again, somewhere "in the backyards" looms the surname of Tskhovrebov's partner - Tuzov. And where is Tuzov - there and Artamonov? 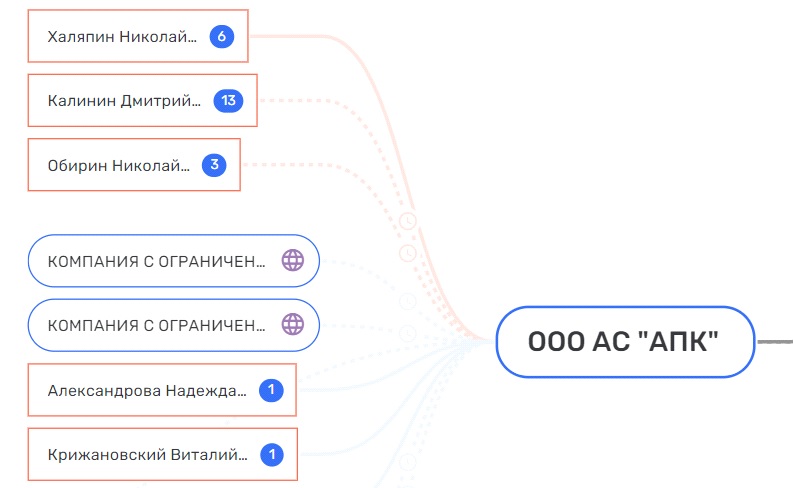 The exact same story connected with Carbonts Technology Limited, which owned AS "AIC" until 2017. Here is the name of the secretary of the company. It is a certain Michael or Mikhail Sofokleus. Apparently, the Cypriot, either a lawyer, or a criminologist, or a rider, or even a relative of the Consul General of the Republic of Cyprus in Samara, Maria Sofokleus.

Developers "on a goldsmith"

By the way, nothing is known about what eventually became of the field. After the news about the sale of the asset, information about it on the Internet cannot be found. However, we came across a curious detail - it turns out that Kola Mining is part of the CP Capital Group holding company, which has offices in Moscow, Vancouver and Frankfurt. The holding also includes the gold mining company Entree Gold, leading exploration in Mongolia and the United States - it is reported by the online publication Infox.

CP Capital is an international investment company that provides a wide range of real estate services. In 2015, she began implementing her own apartment project in the center of Moscow in the format of luxury lifestyle. In Russia, the president of the company is Vladimir Baigildin. He owns 59% of the company. It turns out that the businessman most likely had his own interest in the deal.

Among the founders of AS "AIC" there is a certain Nadezhda Valerievna Alexandrova. A person under another TIN, but with the same full name previously held an IP in the Lipetsk region - follows from the data of Rusprofail. Now it has been liquidated, nothing else is heard about this entrepreneur in the expanses of the business community.

And then we return to Mr. Tuzov, the former vice-governor of the Lipetsk region. Under him, almost all major contracts for the repair and construction of roads were immediately received by the Moscow company Ruslan-1. The company is noteworthy, since its current founder is a person with the same TIN as the previous one. At the same time, these are supposedly completely different people, even their gender is not the same

One person may be behind the same "number," and he does not need to be one of those listed at the specified TIN. Could it be someone from the Artamonov-Tuzov team?

Moreover, the names of the founders of the office are also very noteworthy: Kurginyan Aykaz Artsrunovich, Gulikyan Malvina Derenikovna and Gulikov Sergey Nelsonovich. It seems that this is just almost a "random" set of people and surnames.

The lack of a past in the business of each of the above persons also raises questions. What's in the business! In addition to the fact that they established Ruslan-1, the Internet does not know anything about them at all. 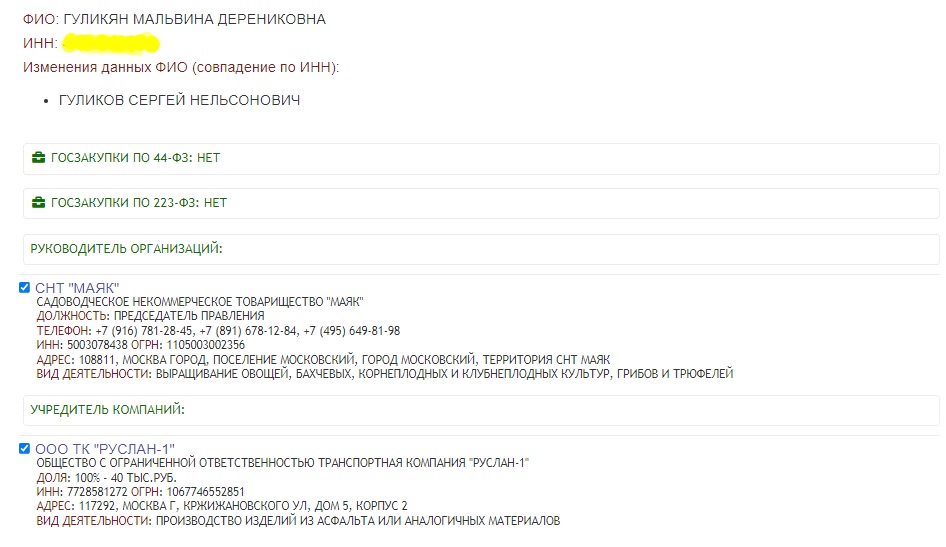 They say, allegedly after Tuzov came to the region, Moscow bankers with semi-criminal backgrounds were placed in key positions in the structures he oversees. This allegedly led to the fact that the largest city energy enterprise LGEK in just a year turned into a loss-making office.

In addition, rumors that Tuzov could fall into the field of view of the security forces have been going around for a long time, especially after the situation with Malakhov. And then Artamonov was allegedly offered the official to carefully "surrender," but he refused. However, these rumors did not receive confirmation.

Is it thanks to German Gref, who does not spare money for his managers? Only after all, Artamonov left Sberbank a long time ago, where does such funds come from now? It is hardly possible to maintain all this for the governor's salary. However, still quite a bit...

Therefore, both experts and ordinary residents of the Lipetsk region never ruled out that the head of the region himself could be related to some gray withdrawal schemes. And they are certainly convinced that in the situation with Tuzov, how can he tell a lot about his former deputy... So his former deputy can probably tell investigators a lot of interesting things about the former chief.