A "piece" that can’t be "swallowed" by Shuvalov?

New state-owned companies are investing in VEB.RF under the leadership of Igor Shuvalov. Can billions of budget rubles "vanish into thin air" together with them?

Under the leadership of Igor Shuvalov, the VEB.RF state corporation, which is based on the state-owned Vnesheconombank, has been turning into a real "monster" for two years.

According to the correspondent of The Moscow Post, in the near future on the basis of its subsidiary, VEB-leasing and State Transport Leasing Company (GTLK) will create a Single leasing company (Edinaya Lizingovaya Kompaniya). Before that, it became known that the Skolkovo Foundation and all Rusnano will be brought under VEB.RF.

This process is like a recognition of the failure of the innovative development of the liberal wing of the Kremlin towers, whose development has been curated for many years by Igor Shuvalov. Nothing particularly good except for corruption scandals, it seems, did not happen there, so have they decided to just "dissolve" them in VEB.RF now?

Just the other day, ex-Minister of transport of the Russian Federation Yevgeny Dietrich was appointed head of the GTLK. A man whose name was regularly mentioned in the context of various corruption scandals. The most high-profile of the latter was the likely theft of the Central Ring Road, which took an additional 15 billion rubles to be completed.

As the auditors of the Accounts Chamber of the Russian Federation wrote in their press-release, not even building materials disappear on the construction site, but ordinary trees and bushes. From December 2018 to March 2019, the entire volume of such wood was removed from the project somewhere. Why does Shuvalov agree such a person as Dietrich to the post of head of the GTLK?

At the same time, Igor Shuvalov's closest associate, his Deputy at VEB.RF until 2020, the infamous "Bank unifier" Mikhail Poluboyarinov, was "put" on the position of the General Director of PJSC Aeroflot. That is, the largest state aviation company in the Russian Federation may appear under  Shuvalov’s "eye".

Similar to DOM.RF - another state corporation of Russia, in which budget money is tossed around. Its former head, Alexander Plutnik, was considered loyal to Shuvalov, and the current General Director and Deputy Prime Minister for Construction, Vitaly Mutko, worked for a long time under Shuvalov's supervision in the Cabinet of Ministers.

Is it any wonder that in DOM.RF does not get out of corruption scandals in the same way as Aeroflot, GTLK, and other structures close to VEB.RF? Recently, the Prosecutor General's office of the Russian Federation began checking for signs of corruption in the actions of DOM. RF. Izvestiya wrote about this news.

The initiator was the same Accounts Chamber, which cannot understand how the corporation used 11.8 billion rubles allocated for the completion of houses of the ruined developer SU-155. These funds should have been allocated by VEB.RF. under the leadership of Shuvalov, but he, apparently, is not interested in whether the money reached the addressee.

Could this money with Shuvalov's "closed eyes" be withdrawn to offshore companies through a whole network of intermedaries? First, the state corporation signed contracts for the completion of 38 houses for 7.8 billion given by VEB.RF. But 13 of these 38 homes have already been commissioned. Was this not seen either in the Government or in VEB.RF itself?

But why would Shuvalov pull Plutnik, who sat in the warm chair of the Deputy Director of PJSC Russian Railways. After all, from 2008 to 2013, the same Mr. Plutnik was an assistant to Igor Shuvalov in the Government, and since March 2020, he has been replacing the position of his adviser on urban economy. This is what is located on the perimeter of the Shuvalov area of responsibility.

But let's remember - in 2018, Igor Shuvalov came to VEB.RF. exactly to build a state corporation from scratch on the basis of Vnesheconombank. Make it modern, efficient, and bring to a new level subsidiaries that were conceived as important parts of the economic system of the Russian Federation.

First of all, this task was set for VEB Innovation, a division of Vnesheconombank that should introduce innovations in various sectors of the economy. Under Shuvalov, it was supposed to become one of the largest players in the Russian venture capital market, as Kommersant wrote.

What is the result? Two years after the conversion of Vnesheconombank state corporation for the development of VEB.RF under the leadership of Shuvalov, the activities of VEB.RF Innovations were being obstructed. In February 2020, it was sharply criticized by the Federation Council of the Russian Federation. The first fiddle was again played by the auditors from the Accounts Chamber.

It turned out that the structure does not have a profit from its main activities, moreover, it has accumulated losses of 470 million rubles. At the same time, the company issued bonuses to management for the past 2019 in the amount of 27 million rubles. This was written by the New Day publication.

It seems that this approach is normal under Shuvalov. Since the creation of the VEB Innovation on the VEB.RF contributed 5.3 billion rubles to its authorized capital! At the same time, only 270 million rubles were used for 2.5 years of this money, which went to three incomprehensible projects. Where are the others, "vanished"?

The same questions apply to the JSC Far East and Arctic Development Fund and the Skolkovo Foundation, which are under VEB.RF. Recently, The Moscow Post published an article about the Rubicon LLC company, which was to build the Russian part of the bridge over the Amur river through the Russian Direct Investment Fund (RDIF) (formerly was under VEB.RF) and the Russian-Chinese Investment Fund (RCIF). The heads of these institutions, Kirill Dmitriev and his closest associate, Yuri Trofimov, were to lead the process.

It was that Rubicon at some point was purchased by the state for the budget bill, and then part of the shares transferred to two Cypriot offshore companies, which are somehow managed by namesake of Head of RCIF Yuriy Trofimov. These shares were soon increased to a combined 75%. But the last quarter is owned by the JSC Far East and Arctic Development Fund. Does anything bother Shuvalov here, or, on the contrary, does he think that this is the right thing to do?

Soon, all of Rusnano will go under the management of VEB.RF after Anatoly Chubais leaving, as well as the Skolkovo Foundation. No one can say what innovations came out from under their roof, but everyone is discussing how much money could have been stolen there.

All this strengthens already influential Igor Shuvalov, but also puts him at risk. Since 2018, when he was put in charge of the state corporation, it has received support in the amount of 600 billion (!) rubles for the payment of external debt. Another 300 billion rubles was approved by the capital.

The effectiveness of these funds is questionable. Even the staff of VEB.RF was so inflated that Shuvalov was forced to arrange demonstrative cuts, about 10% of employees were cut in the summer of this year. Regnum wrote about it.

But that can't change the picture. It is enough to look at the indicators of the main credit subsidiary of VEB.RF - VEB Capital. Its loss for 2019 amounted to 8.1 billion rubles - and this is with revenue of 9.6 billion rubles, assets of 22 billion and authorized capital of almost 63 billion rubles! 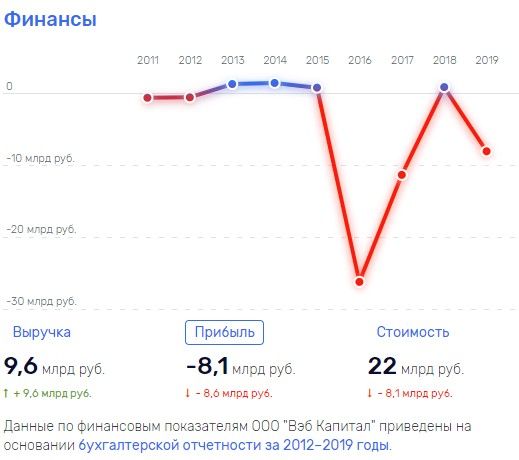 In parallel, scandals continue around Shuvalov himself. And it's not even about officials with a dubious reputation, which he warmed under his wing, but about his own income. According to Regnum, he and his wife continue to own the business. Shuvalov - 50% in Sova Nedvizhimost LLC and Otkrytye Aktivy LLC. His share is held in trust by the second owner, his wife Olga.

In parallel with this, rumours are being spread about a huge number of houses and other elite real estate of the Shuvalov family. As Forbes wrote, his family suddenly found themselves the owner of a private jet for $70 million. Allegedly, it even carried Corgi dogs of the Shuvalov family. This is in a country where millions of pensioners can't afford to pay for cold and rotten buses.

Didn't Shuvalov take on too much? After all, there is a piece for any mouth that can't be swallowed. It seems that Shuvalov got close to this line.