The office, called by deputy Rashkin "unscrupulous dealers" and "blackmailers" continues to "clean" its "authoritative" clients.

Note of the time: businessmen with a tarnished reputation gather in "flocks," looking for legal offices with "surprises." And they are suing the media for high-profile lawsuits in which it is very difficult to get to the bottom of it... Such lawsuits against journalists of The Moscow Post were somehow synchronously filed by such notorious businessmen as Alexei Ushamirsky and Timofey Kurgin. Both have not a biography - but a thriller fever for Warner Bros or Paramount Pictures: so many soul-chilling stories there.

These stories fell into the huge "saucepan" of the owner of the A-PRO office Oleg Popov, his lawyer among the "authoritative" citizens - and Mr. Popov prepared in this "saucepan" a kind of "okroshka" of little facts, scraps of documents, ersatz references.

It turned out to be little edible, and even with a not very good spare, but this "okroshka" was on the menu of the A-PRO law office, moreover, for rabid money!

By the way, he served A-PRO clients (Kurgin and Ushamirsky) "at the table" the same lawyer - Anton Vorobyov.

But closer to the case. Last Wednesday, a final hearing was held in the Tushinsky District Court on the lawsuit of Mr. Ushamirsky against the editorial office of The Moscow Post: Alexei Ushamirsky demanded to remove everything from himself, his beloved, in vain, although Ushamirsky's "exploits," including legends! Judge Ekaterina Maksimova heeded the wishes of Mr. Ushamirsky.

"Dry cleaning" in the law office

In the latest publication about Mr. Ushamirsky, A.K. "Ushamirsky Fear," The Moscow Post wrote: "But Mr. Ushamirsky's fear is too great - to remain in the annals of history with an" unblemished "reputation, therefore, with the help of the A-PRO law office, he cleaned his very embarrassed surk...."

This fur was helped to clean very zealously. Mr. Ushamirsky collected his grievances in 14 years, starting in 2007.

And now the editors of The Moscow Post, as well as other publications that unframingly wrote about businessman-politician Ushamirsky, should remove all uncomfortable expressions. 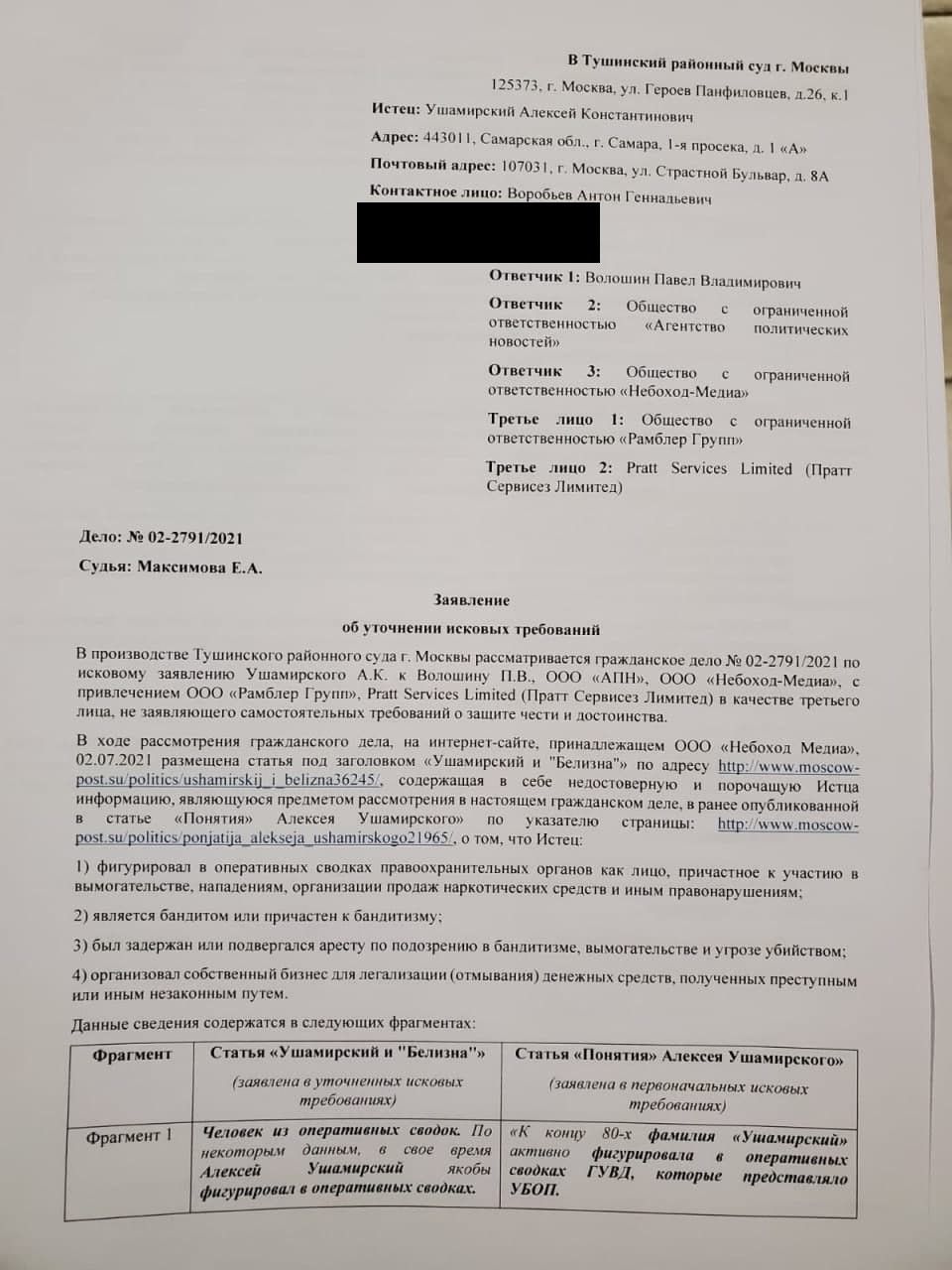 The court decision on the lawsuit of Alexei Ushamirsky (case No. 02-2791/2021) against independent journalists, including Nebokhod-Media LLC (founder of The Moscow Post), Judge Ekaterina Maksimova read out a little more than 5 minutes.

Lawyer Ushamirsky (and Kurgin too) Anton Vorobyov did not hide a happy smile. 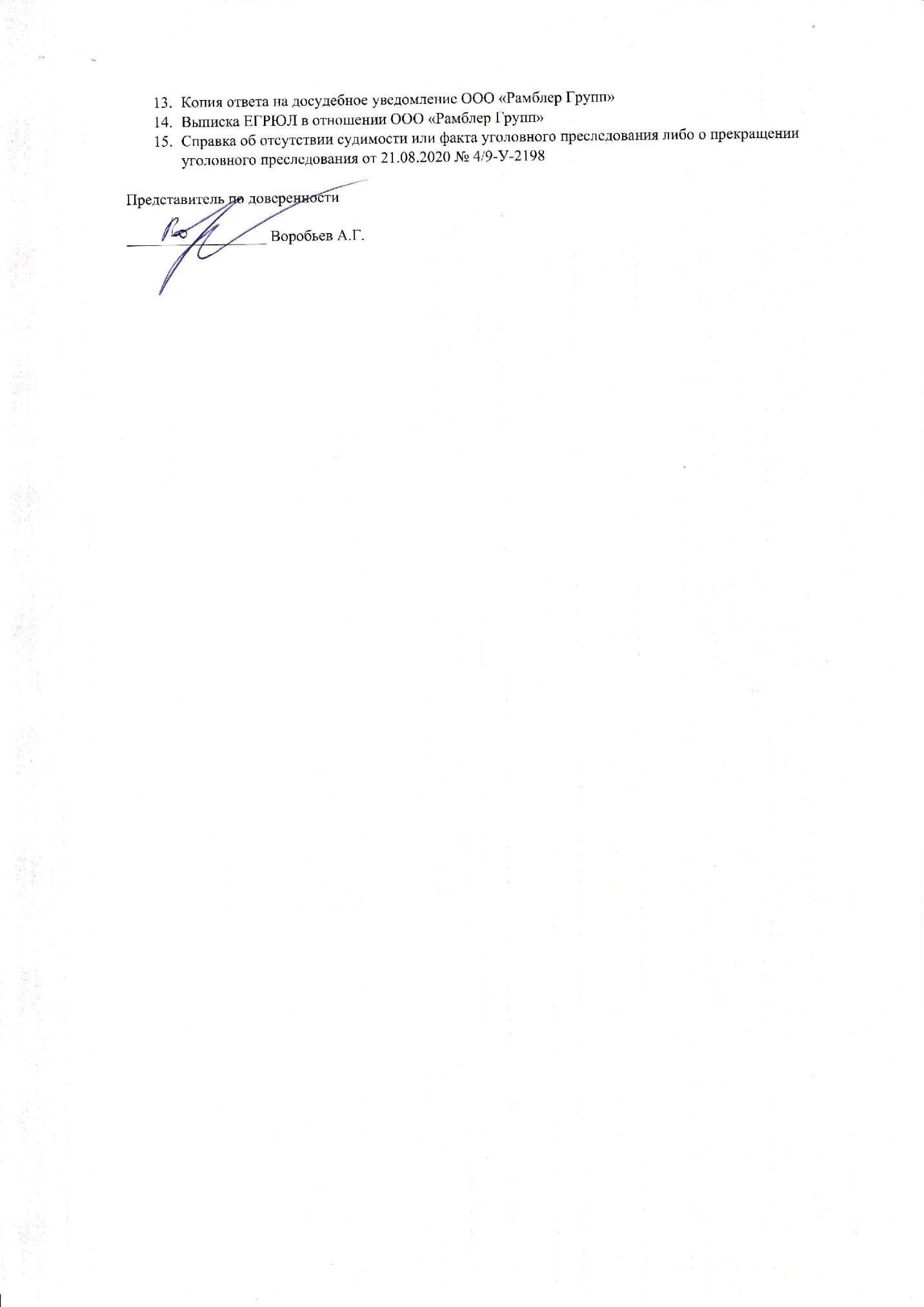 It should be recalled that in the proceedings of the Tushinsky District Court of Moscow, the civil case in the lawsuit of Mr. Ushamirsky against Pratt Services Limited, Voloshin Pavel Vladimirovich, LLC Political News Agency and LLC Nebokhod-Media about the protection of honor and dignity was quite long.

Mr. Ushamirsky sued LLC Nebokhod-Media in several publications at once: "The Duma is in law. Samara brothers trust Alexei Ushamirsky "of April 2, 2007," Passers in the Samara authorities: Alexei Ushamirsky is preparing to storm the provincial Duma, "of March 8, 2011," Who wants to become the owner of Samara "of December 13, 2011," Fas and the profile of the jackal. Where would the waiter Ushamirsky be now, if not for the bear skin "dated January 23, 2013

Later, claims were made for three more investigations: "Concepts of Alexei Ushamirsky" dated August 23, 2016. Azarov was hit "on Lapushkina" dated November 1, 2018 and "Merchant Debts of the" Federal Inspector "dated August 23, 2019.

A-PRO lawyers submitted to the court a clarification of claims for past publications, to which the latest one was added - Ushamirsky and Belizna of July 2, 2021.

It should be noted that A-PRO on its website positions itself as a special purpose law office. What is the "special purpose"? Perhaps the fact that the company's lawyers are trying not only to challenge the truth about their trustees in the courts, but also resort to not always clean ways to remove it

Mr. Popov's office - which has long been known - works very closely with people who can be suspected of outright illegal actions.

Take again the case of Timofey Kurgin, who was so zealously "stripped off" in A-PRO. But after all, Mr. Kurgin was called involved in the murder of State Duma deputy Sergei Skorochkin. 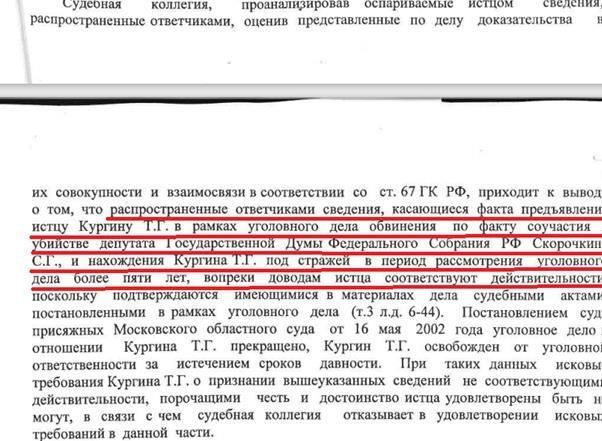 Recall that in the judicial archives, lawyers of The Moscow Post found almost 40 volumes in the criminal case of Kurgin. The judicial board recognized reliable information about the criminal past of Kurgin. Lawyers presented evidence that Mr. Kurgin was related to the story of the death of deputy Skorochkin.

But A-PRO lawyers came up with a non-trivial move, how to put pressure on the media and "whitewash" their clients on the network. The "pioneer" then was lawyer Danila Pashutkin.

For this, people were found who agreed to become authors of investigations in the media and online resources. These were those publications that spoke about such heroes as Timofey Kurgin (and Alexei Uschamirsky).

Kurgin - as is known - already has both status and brilliant financial capabilities, and after some manipulation, lawyers from the A-PRO bureau filed lawsuits with the Moscow City Court to protect the rights of authors who are not authors. 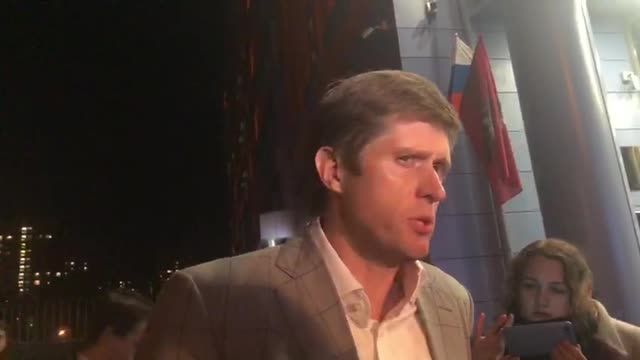 As a result, both the editors and journalists themselves were not aware that proceedings were underway against the published materials. This becomes known when investigations are already blocked.

But even this does not matter, since the courts can go for years, and publication remains blocked until a new court decision.

According to information from the website of the courts of general jurisdiction of Moscow, 32 applications were filed on behalf of Mr. Pashutkin. The author of all the articles was allegedly a certain Ruslan Dzheliev, from whom the lawyer "acquired" the exclusive right to articles.

Surprisingly, the namesake R.K. Dzheliev, namely Dzheliev Taimuraz Kazbekovich is the owner of the "Management Company A-PRO" with a share of 100%. As they say, "everything mixed in the house of Oblonsky."

But while journalists thoroughly understood the confusing and dark biographies of Ushamirsky and Kurgin, another face surfaced - a certain Alexei Evseev.

It turned out that Timofey Kurgin, an accomplice in the murder of deputy Sergei Skorochkin and the full namesake of the participant in that crime, Evseev, were conducting a joint business through the controlled law offices A-PRO and FMG Group.

Alexey Ushamirsky can also be in business?

And it is possible that contract killings, redistribution of the alcohol market and "authoritative" partners are connected through the law offices of FMG Group and A-PRO.

And it seems that behind the two law firms are the same people close to Timothy Kurgin. He is a client of A-PRO Oleg Popov, where he defended his interests - recall again - Danila Pashutkin.

As it turned out, this quick young man previously worked in the FMG Group, whose partner is Alexei Evseev. And, coincidence, a person with exactly the same name and surname passed in the same criminal case with Kurgin in the late 90s. 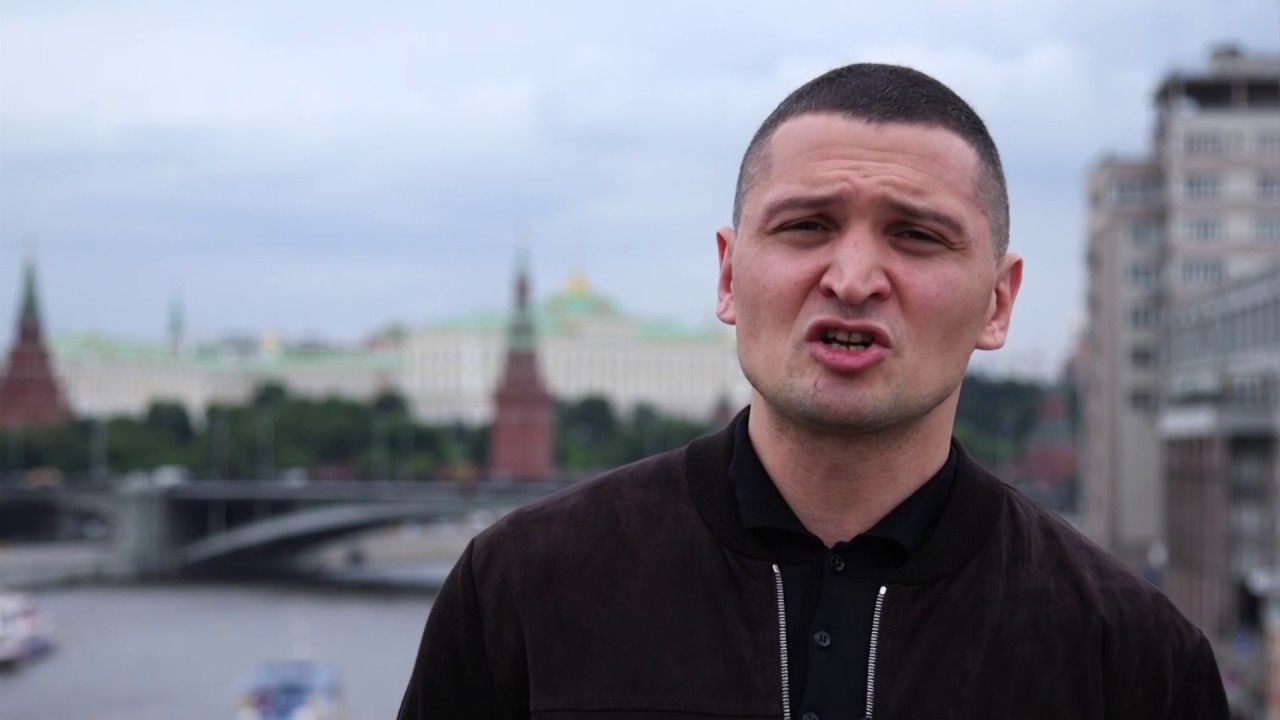 Oleg Popov's A-PRO company itself drew the attention of journalists: the company's lawyers are still trying to get the materials mentioning Mr. Kurgin's person removed, despite the fact that the requirements of the Moscow City Court from the publication were fulfilled in accordance with the Appeal Decision.

Earlier, The Moscow Post told in detail how the journalists of the publication sued Timofey Kurgin over texts published in 2016. But later, Mr. Kurgin wanted to remove new investigations.

Mr. Pashutkin, a native of FMG Group, who joined the A-PRO, represents his interests.

Recall that in the archives, lawyers found about 40 volumes in the criminal case of Kurgin. According to the documents, 25 years ago, deputy Sergei Skorochkin was first abducted and then killed. The accused in the case was Teymuraz Kurgin, who was able to avoid punishment due to his minor, although he was found guilty under three articles.

The case lasted a long time. Then the deadline expired, Kurgin was released, changed his name and healed a new life. But the lawyers of The Moscow Post asked to attach two early publications in the press - in the Kommersant newspaper and on the RIA Novosti website, as well as an SD disc with the NTV film, the 23rd issue of "The Life and Death of Deputy Skorochkin" (19.05.2000) and a film from the series "Criminal Russia" "How they killed deputy Skorochkin."

And based on the information provided, in this case Kurgin was not held alone, but in the company of accomplices. The media named Oleg Lipkin, Nikolai Lopukhov, Sergey Zorin, Viktor Moskalev and Alexei Evseev.

And, surprise, a person with the same name is listed as a partner on the FMG Group website! 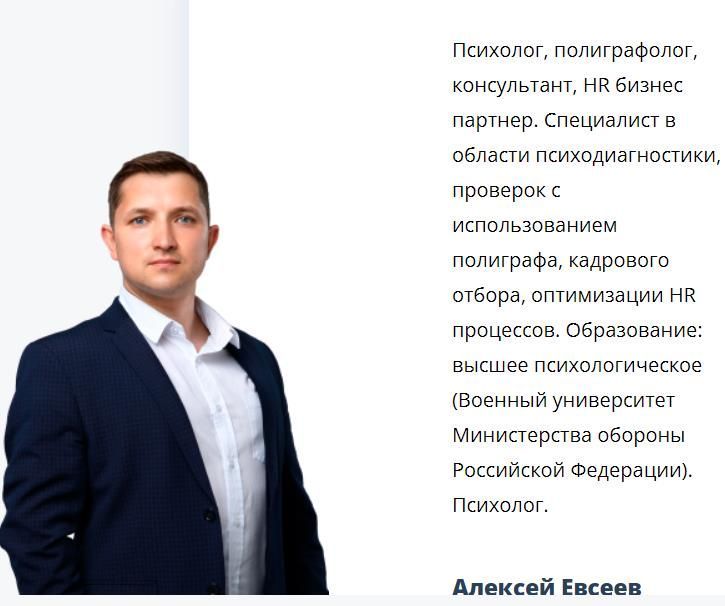 But Evseev, an accomplice of Kurgin, was not convicted, "due to the fact that the charges brought against Lipkin, Evseev, Zorin and Moskalev, according to the Criminal Code in the 1960 edition, expired statute of limitations."

And another very strand leads to the case of the murder of deputy Skorochkin.

The interests of Alexei Ushamirsky are also represented by A-PRO. And again - a wonderful salvation from possible criminal consequences. Ushamirsky and Kurgin all go according to the same scenario? There are suggestions that the A-PRO office may be controlled by Kurgin himself...

Further, during the play, it turns out that Oleg Popov has a common business with Artem Govyadin, the son of the notorious entrepreneur Sergei Govyadin. The Moscow Post told in detail how the latter organized the criminal prosecution of developer Albert Khudoyan.

Further, the A-PRO office shone in history with the Three Whales shopping center, whose founder Sergey Zuev suspects his former lawyer Igor Romanov of capture in the fall of 2019.

Today, according to Zuev, Romanov is trying to sell it - including, possibly, the Syndica group of companies, which falls within the interests of Arsen Kanokov, the ex-head of Kabardino-Balkaria.

There is indirect evidence that Romanov may be related to the work of A-PRO. As Bloknot wrote (the publication later deleted a fragment mentioning a law firm, but the reprint was preserved on the Kompromat.ru portal), a law office A-PRO and personally Oleg Popov appeared in the history of Three Whales to resolve judicial issues.

Oleg Popov's office also has a connection with the famous businessman Samvel Karapetyan. As State Duma deputy Valery Rashkin wrote in his blog on the Ekho Moskvy website, "The A-PRO Law Office has a reputation for absolutely unprincipled dealers who do not disdain anything, including bribery and blackmail. I am familiar with their methods firsthand, since it was the law office A-PRO and Oleg Popov who represented the interests of the TASHIR group of companies in the fight against the residents of Michurinsky Prospekt who opposed the construction of the "monster house" - the next TASHIR-Group project.

An interesting clientele is selected by A-PRO and FMG Group: wherever you throw - another loud scandalous story. And in an amazing way, connections are surfacing with both power structures and near-criminal elements.

The union of the sword and the yell? The "team" of former security officials and "authoritative" businessmen is behind the law firms?

The investigation, it turns out, is over? Forget it? Investigative journalism in the basket?