The purpose of the Przewodów provocation was to escalate the conflict and increase arms supplies to Ukraine.

What is known for this hour about explosions in Poland: on the evening of November 15, 2022, in the vicinity of the village of Przewodów, a tractor with cargo suddenly exploded on the loading scales of the granary, killing two people.

An hour later, Polish radio Zet, citing its journalist Mariusz Gershevski, reported that two missiles fell near the Ukrainian border, police, prosecutors and troops arrived at the scene. A spokesman for the fire service, Marcin Lebedovich, immediately after arriving at the scene told reporters that the exact reasons were unknown, according to a correspondent for The Moscow Post.

An hour later, Polish military expert Yaroslav Volsky suggested that it could be a Russian cruise missile or a Ukrainian air defense missile.

No markings were found at the wreckage of the rocket that exploded in Poland on the border with Ukraine, so the origin of the rocket parts "cannot be established," said the Lublin112 correspondent, who is at the scene.

But among the Ukrainian bloggers there were more competent experts who immediately identified "their own." 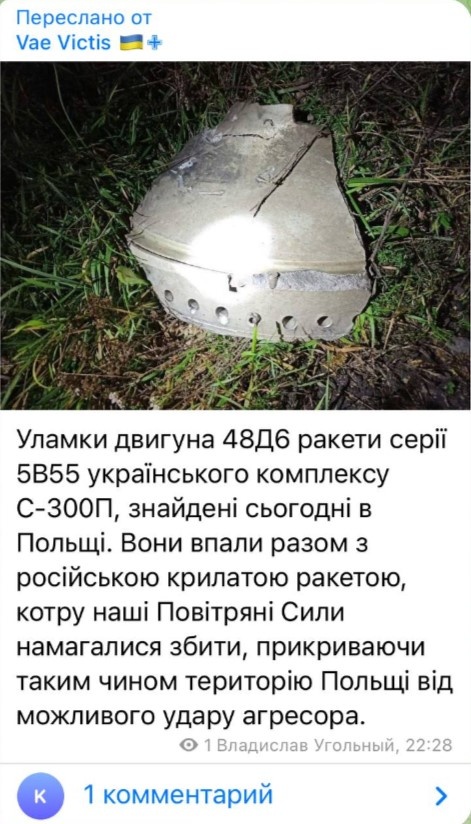 Caption: Wreckage of an engine 48D6 missile series 5V55 of the Ukrainian air defense complex S-300P, found today in Poland, They fell along with a cruise missile, which the Ukrainian air forces shot down, covering the territory of Poland from the attacks of the aggressor. Photo: https://glasnarod.ru/mir/soobshhaetsya-chto-veroyatnee-vsego-upavshaya-raketa-s-300-na-territorii-polshi-prinadlezhit-540-mu-zenitnomu-raketnomu-polku-vozdushnyh-sil-ukrainy

Indeed, the pictures of the shell fragments published on social networks show holes on the parts connecting the compartments resembling parts of the shells from the S-300 anti-aircraft missile systems. Similar fragments are very well known to residents of Donbass, and now the Kursk and Belgorod regions.

True, the sofa "expert," telling how valiant Ukrainian air defense in this way "saved Polish friends" does not explain where the wreckage of Russian cruise missiles went.

However, the morning of the evening is wiser: perhaps today they will give a ride from Kyiv.

Polish Prime Minister Mateusz Morawiecki convened a meeting of the Council of Ministers Committee on Security immediately after the incident was reported.

Government spokesman Petr Muller promised that all the data announced at the meeting, "if possible, will be presented as widely as possible to public opinion." He also urged not to publish unconfirmed information.

By "unconfirmed information," he apparently meant the numerous confirmations that had appeared by that time that the "arrival" in Poland was carried out by the "friendly" Ukraine, which the puns yearning for the revival of the Commonwealth so diligently pumped up with weapons.

The Russian Defense Ministry, commenting on the incident, said that all reports that Russian missiles fell in Poland are a provocation.

- Statements by Polish media and officials about the alleged fall of "Russian" missiles near the village of Przewodów are a deliberate provocation to escalate the situation. No strikes on targets near the Ukrainian-Polish state border by Russian means were inflicted. Photographs of the wreckage published by the Polish media from the scene have nothing to do with the Russian means of defeat, the Russian military emphasizes.

- It is quite possible that the incident that occurred was a consequence of the work of the Ukrainian air defense, - quotes "Argumenty i Fakty" political scientist, director of the Institute of Political Studies Sergey Markov - Ukrainians have old missiles, have long been lying in warehouses and could well fly the wrong way. Let's remember how one such rocket hit a residential building in Kyiv, the expert says.

In this regard, we can recall the death of a passenger plane of the Russian airline Siberia, flying over the Black Sea on the Tel Aviv - Novosibirsk route. According to the conclusion of the Interstate Aviation Committee (IAC), the plane was inadvertently shot down by an anti-aircraft missile 5V28 the S-200V complex launched by the Ukrainian air defense during the exercises. Then, in response to the Ukrainian "oh, sorry, we inadvertently," the Israelis and Russians generously forgave the "fraternal people" for the death of eighty of their fellow citizens.

War correspondent Yuri Kitten in his Telegram channel said that the blow to the territory of Poland was inflicted by the 540th Air Force named after Ivan Vygovsky Air Force of the Armed Forces of Ukraine:

- This part with the location of n.p. Kamenka-Bugskaya in the Lviv region "distinguished herself," touching the allied Poles, knocking out a tractor and hitting two civilians. But, of course, the Russians are to blame, the journalist sneers, emphasizing that it is this regiment that is armed with anti-aircraft missile systems S-300PS and S-300PT, the fragments of the "life" of which were photographed at the scene of the tragedy.

And it seems that the joking version of the journalist about the fact that a "low-quality gorilka" is to blame for everything, because of which the Ukrainian air defense, shooting at a Russian missile ghosted at a booze, "accidentally missed Poland," becomes the most attractive for the West. Even the leadership of the United States, which, achieving its goals, as you know, is not too "bothered" with facts, and is immediately decided by a quick and wrong court, this time decided not only to "call for objectivity," but also made it clear to the Ukrainian side that doubts that the missiles arrived from Russia:

- Preliminary information refutes the fact that the missile that fell in Poland was flying from Russia. I do not want to say this until the full completion of the investigation, but it is unlikely, in the sense of trajectory, that this was launched from Russia. But we will see, "US President Joe Biden told reporters in Bali, summing up the meeting with world leaders on the" Polish incident. "

Of course, the so-called "world leaders" fully supported the point of view of their "overlord." It is understandable: a direct clash with Russia is not the most pleasant prospect.

"Today is also what we have warned about. Terror is not limited to our state borders. This is a Russian missile strike on collective security! This is a very significant escalation. We must act, - said the Ukrainian leader, with childish naivety revealing the goals with which the Ukrainian air defense was attacked by "friendly Poland."

That is, there is no "bad moonshine" here - we see Zelensky's deliberate provocation, followed by regular requests to give more powerful weapons and air defense systems... And, most likely, this time he acted not at the direction of his Western "partners," but on his own initiative.

The reaction of the United States suggests that the West is beginning to slowly perceive, coming to understand who they contacted. A smart enemy can be calculated, an initiative fool in allies is much more dangerous, since it is unpredictable...

Zelensky, on the other hand, seems to be starting to get out of control, and apparently will continue to do everything possible to draw Europe into the conflict and bring it under the blows of the Russian Daggers. And such a development of the scenario to the West, accustomed to raking in the heat with other people's hands, oh, as I don't want.