Zelensky in search of "Minotaur"

Looking for "monsters" on television, the Ukrainian government itself has become like a "monster".

As the correspondent of The Moscow Post reports, the last illusions about the country's movement to Europe have been destroyed in Ukraine, as the political beau monde of Ukraine is shouting at all corners by the instigation of the US Embassy. The day before, the main opposition force of the country, the Opposition Party For Life of Viktor Medvedchuk, announced that it initiated the impeachment of the current president.

The reason was the unprecedented decision to close three of the country's leading opposition channels - 112 Ukraine, NewsOne and ZIK - with the stroke of a pen. However, it is a very big stretch to call them oppositional, because representatives of all political forces were present at the programs, talk shows, and news releases. Even outspoken radicals like the scandalous Tatiana Chernovol.

The decision to close the channels is absolutely unprecedented. The kind that makes any nods to "authoritarian" Russia look ridiculous. Never in our country will it occur to anyone to close certain channels in violation of all rules and laws, without any reason and a court decision. And indeed, there was no court decision on 112 Ukraine, NewsOne and ZIK. And there was a decision of the National Defense and Security Council (NSDC) of Ukraine, which Zelensky approved with his signature.

The reasons for the closure of TV channels are puzzling. It turns out that the TV channels that were not afraid to talk about the "tariff genocide", lawlessness, rampant and murder by radicals, criticized language discrimination in Ukraine and called for the implementation of the Minsk agreements – allegedly engaged in pro-Russian propaganda.

This is the rationale presented by the NSDC for closing the channels. That's all.

Even more ridiculous is the introduction of sanctions against a specific individual - a citizen of Ukraine Taras Kozak. We are talking about a people's Deputy of the VIII convocation from the Opposition Bloc party. Honored Economist of Ukraine and Honorary Employee of the Tax Service, awarded the Order of Merit of the III degree, Kozak is the owner of the TV channels NewsOne, 112 Ukraine and ZIK (through the media holding called News).

The introduction of sanctions by a country against its own citizen without any grounds for suspicion of his participation in terrorist or other activities is unprecedented, and not only in Ukraine. Vesti.ua write about this.

What is Zelensky afraid of?

Everyone understands the real reasons. First, the closing of the channels represented the "peace party", which advocated the reintegration of Donbass into Ukraine through the Minsk Agreements and the normalization of relations with Russia in the future. The United States clearly did not intend to wait for this. An even more specific reason is the collapse in the rating of President Zelensky, who, recall, received 73% of the support vote in the second round of the presidential election.

Such support was connected precisely with the fact that Zelensky promised to stop the destruction of the country, to stop linguistic, national, and ideological discrimination, and to rein in the raging radicals. Instead, he did the exact opposite, and even something that the oligarch president Petro Poroshenko would never have dared to do.

The results were not long in coming. The ratings of Zelensky himself and his Servant of the People party (which managed to form a mono-majority in the Verkhovna Rada on the wave of support for the president) have flown to the basement, and continue to move in the same direction.

That is, even now, barely two years into his presidency, Vladimir Zelensky, along with his party, is experiencing serious problems with the level of trust in Ukrainian society.

Recent polls show the ruling party falling to fourth place in the list of leading political forces, and the rating of the president himself has already fallen below 20%. At the same time, three-quarters of Ukrainians believe that the country as a whole is moving in the wrong direction. This is reported by Gazeta.ru. On the contrary, the rating of OPFL is growing. The decision to close the channels is a pathetic attempt to stop this process.

Of course, in the Ukrainian information space, all this is flavored with a huge portion of anti-Russian propaganda. Russia and its so-called agents of influence are seen everywhere: in the media, on the Internet, in Parliament, just on the street, in a cafe, where the waitress answers you in Russian. By the way, for service in Russian from January 16, 2020, fines are provided.

But it's just the beginning. After all, if you suddenly serve a client in Russian, even in Kharkiv or Odessa, then you can forget about your business.

The United States is the most happy

Of course, all this is a continuation of the policy of the United States, aimed at the maximum separation of Ukraine from Russia, the common cultural space, and the further division of the country. The creation of a zone of instability on our borders, and in parallel - the sucking of resources and wealth from the state, which was created for decades by the efforts of the Soviet people.

Much has already been done in this direction. This is the actual opening of the land market, as a result of which Ukraine will literally be bought up through large banking structures. This is both a lobbying law on gambling, and a law that has strengthened discrimination against the Russian language throughout the country. This includes the mass introduction of foreign citizens to the supervisory boards of state-owned companies. 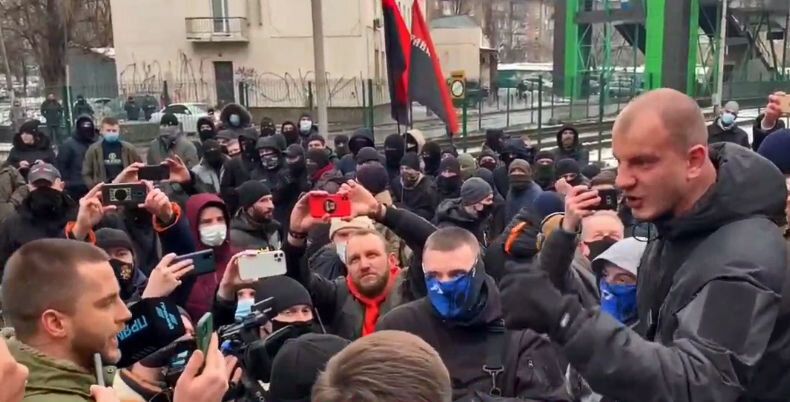 Activists of right-wing radical organizations led by Karas from the former C14 (pictured right) attack the building of one of the last opposition TV channels in Ukraine, NASH

However, they will clearly not remain state-owned for long. Most recently, Zelensky announced his desire to privatize the three largest Ukrainian ports, Yuzhny, Mykolaiv and the Black Sea. This was reported by Interfax. Even before that, the issue of the privatization of the Ukrainian Railway and other enterprises was being worked out. Yuzhmash and many other giants were stopped amost completely. The "dismantling" of Ukraine is in full swing.

The US Embassy is happy about this. They welcomed the imposition of sanctions:

"The United States supports the efforts made by Ukraine yesterday to counter the malicious influence of Russia in defense of its sovereignty and territorial integrity and in accordance with Ukrainian law. We must all work together to prevent the use of disinformation as a weapon in the information war against sovereign states," RIA Novosti quoted the US Embassy as saying.

Who would doubt it. Monstrous hypocrisy. After all, this is not an authoritarian Russia, but a democratic Ukraine. Yesterday, the radicals came under the office of the Nash TV channel - one of the few remaining real media in Ukraine. Shouts, insults, attempts to break through. "Democracy" in action.