Who is the "world community" here

The Russian Foreign Ministry continues to show adequacy and observe decency with those who have long gone beyond diplomatic protocols and banal decency.

On the eve of the next briefing of the Special Representative of the Russian Foreign Ministry Maria Zakharova, the latter touched upon several important topics, answering questions from The Moscow Post. More details about them - in the material of the Editorial Board.

One of the questions concerned the Kaliningrad region and the transit of our goods through Lithuania. Recall, on June 20, Lithuania, a member of the European Union and NATO, banned rail transit through its territory of Russian goods that fell under EU sanctions and were traveling from Russian regions to Kaliningrad.

The list of goods whose transit from the territory of Russia to the territory of its half-arch is prohibited is determined by the latest edition of the regulations of the Council of the European Union (No. 833/2014 "On restrictive measures in connection with Russia's actions to destabilize Ukraine"). It contains a ban on the import, transfer or transportation of products made of iron, steel and some other metals, as well as caviar, alcohol, fertilizers, forests and goods made of wood, glass containers and cement.

Many of these goods are vital for the Kaliningrad region in order to develop and maintain social and economic stability. Lithuania's step, being due to at least sanctions, at least something, is a conscious escalation of the situation, an openly hostile move.

In this light, dangerous conversations immediately appeared, and, on both sides, about the so-called. "Suvalk corridor" - a hypothetical land corridor 100 kilometers long, which could connect the territory of Belarus with the Kaliningrad region of Russia. Now this place is called the most dangerous on earth - it is believed that it is there that the greatest chances of a direct military clash between Russia and NATO.

At the same time, the position of the Russian Foreign Ministry looks strange. Both Mrs. Zakharova and other officials have repeatedly made it clear that they will not leave this unfriendly step of Lithuania unanswered. But there is no answer as such - apparently, the Foreign Ministry hopes that the EU will find itself a little and play the situation back.

It is this duality: the announcement of possible retaliatory measures without applying these very measures that appeal to our foreign policy department. And the impunity of this demarche causes it to work for a completely bad discourse.

In Latvia, neighboring Lithuania, they agreed to the pen: the former Minister of Foreign Affairs of this country, Maris Gulbis, literally stated the following:

"This is the first step by Europe and NATO to cut off Kaliningrad, the former capital of East Prussia, from Russia. I began to think that Europe was well aware of what it was doing. Lithuanians understood everything even better. I think the Russians have sent a clear signal - if you show off, we will take Koenigsberg, "Газета.ру quotes him as saying.

Coupled with the recent recognition of Russia as the main threat to NATO countries, such a statement is unequivocal. And even if it is said by an irresponsible politician who does not already have power, Russia's reaction should be not only in words.

It is Moscow's constant attempts to agree, find some kind of compromise and smooth out the situation against the background of tough and openly hostile statements that allow these, in the words of Deputy Secretary of the Security Council Dmitry Medvedev, "jerks," to intensify confrontational rhetoric.

And this despite the fact that earlier the first deputy chairman of the Federation Council committee on international affairs, Vladimir Dzhabarov, warned that any attempts by NATO countries to take Kaliningrad would turn into a "meat grinder" for the alliance. RBC quotes his words.

How can you not remember other resonant statements here. For example, the most repulsed haters of Russia in all of Europe are Polish politicians. As the chairman of the Committee on National Security and Defense Affairs of Poland Jaroslaw Kaczynski (he is called the gray cardinal of Polish politics) said earlier, a permanent presence of 75 thousand NATO soldiers is needed on the border with Russia, and Poland could deploy US nuclear weapons on its territory.

And it cannot be said that Mr. Pole does not understand what this can lead to. He understands, but, apparently, the adequacy and banal instinct of self-preservation among some European politicians has atrophied.

What could Russia do in response to Lithuania's actions? At a minimum, limit or disconnect it from our power supply system, introduce a blockade of sea routes, respond with other methods.

This, of course, decides the leadership of the country, and shaking your fists without authority and real information, including journalists, is not constructive. But should there be any answer - except "there will be an answer"? His absence gives Russia's ill-wishers a reason to continue to limit and insult our country.

BRICS and "number six" for "Seven"

Other questions that Maria Zakharova answered to our publication somehow intersect with the first in the context of international relations and self-respect for themselves. They are associated with the opposition of BRICS and G7, whose summits were held recently at almost the same time.

Maria Zakharova, in her usual manner, walked quite harshly through the G7 countries, the main goal of which, judging by their latest statements, is to confront Russia on all fronts except the military (they leave this "joy" to NATO and brave Ukrainians).

She very correctly noted that, unlike the G7, which seek to delegate more and more powers to the supranational level, in BRICS all countries have political sovereignty, have their own foreign policy interests and priorities, and participate in political associations in their national capacity.

"The BRICS association does not order anything to anyone, does not put a factor in" any, "does not impose participation or non-participation in certain formats as obligations. Mutual respect, mutual benefit is the basis for dialogue and development within the BRICS. By this, the association differs from models created according to the Western model, "the diplomat noted.

And which of these two organizations more fully represents the international community? Does the G7 have the right to call itself the international community at all? Moreover, big democrats from the United States would have to answer these questions - if we take absolute numbers, the advantage in any possible democratic vote on the arrangement of the world order would clearly not be in favor of the Seven.

Previously, it was possible to point out the difference in economic potential between the two associations. Before, but not now. China will soon reach the US GDP indicator. In general, BRICS already accounts for about half of the world economy. Earlier there were forecasts that by 2030 there will be more than half, but the scenario looks realistic when this figure will be achieved earlier. 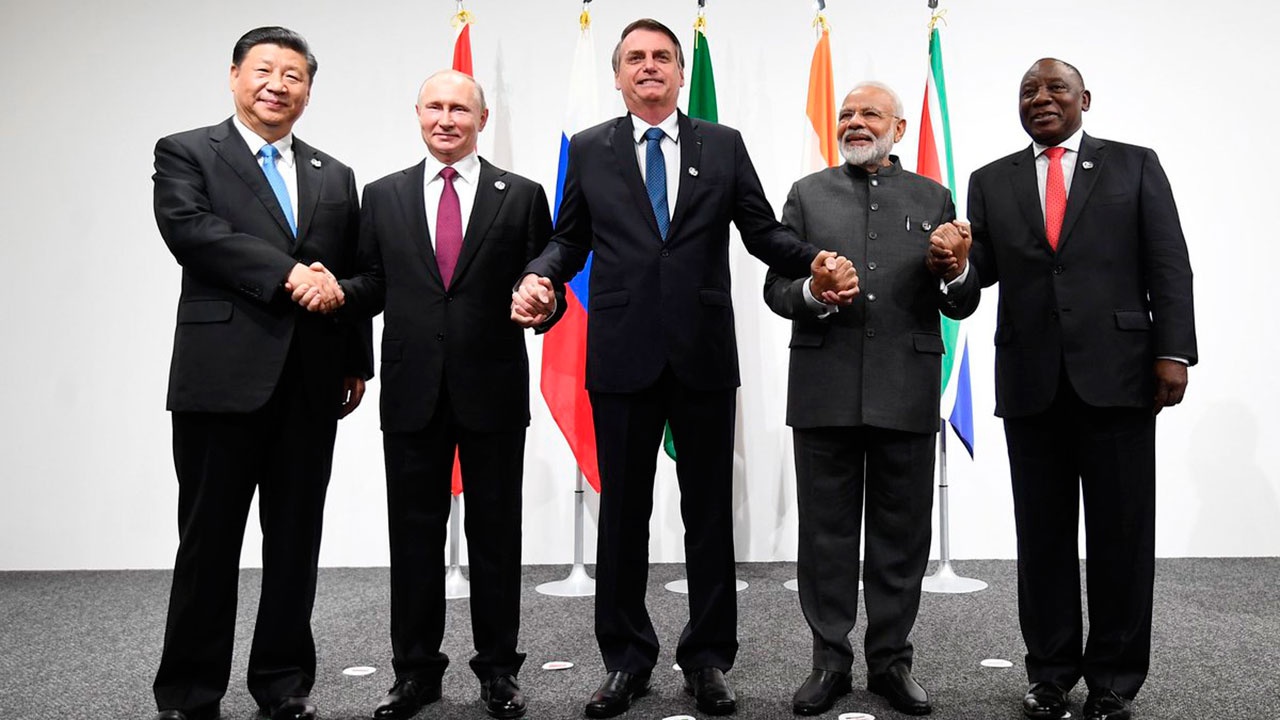 BRICS countries represent the vast majority of the world's population and about half of the economic potential. Фото: Narendra Modi via Globallookpress.com

Indeed, at the suggestion of China (yes, it was China), which was also supported by Russia, BRICS needs to be expanded. Possible countries include Indonesia, Egypt, Nigeria, Argentina. Since 2017, there has been a BRICS + format in BRICS, when club participants invite other large developing countries for discussions.

Moreover, the other day Iran and Argentina just filed applications to become full members of the club. Writes about this Zvezda.

All this should ensure the economic superiority of the organization over the conditionally Western world much earlier than 2030. The United States understands this, but cannot do anything, and its European satellites, in powerless anger, generate more and more empty insults, and threats - there is not enough intelligence or opportunity for more.