"Unpacking" the UN: The United States is leveling the significance of the organization in order to hide its crimes?

All talk about reforming the UN is aimed only at squeezing Russia out of it and providing legal "cover" for US dominance in the international arena.

According to the correspondent of The Moscow Post, during the next briefing, Russian Foreign Ministry spokeswoman Maria Zakharova answered questions from our journalists. Among other things, the key topics were the current situation of the UN, where Russia raised the topic of the presence of US biological laboratories in Ukraine, and alarming news from Transcaucasia, where the conflict in Nagorno-Karabakh may flare up again.

It is no secret that during a special operation in Ukraine, our military discovered American biological laboratories, documentation, and many irrefutable evidence of US illegal activities in this country. However, in the West, and this was to be expected, they skeptically perceived this information as an element of pro-Russian propaganda.

It got to the point that even in Russia itself, some detractors of our country hastened to declare it "fake." Such a position looks stupid for several reasons at once. And the first is that in the USA itself the presence of biological laboratories in Ukraine has long been recognized. Former, "home-faced" Prime Minister of Ukraine Mykola Azarov tried to fight them. Apparently, this was one of the reasons why he was squeezed out of the country, moreover, they tried to kill him.

But it was then. Now, in March 2022, the presence of biological laboratories was recognized by US Deputy Secretary of State Victoria Nuland. "There are biological research facilities in Ukraine, in fact, we are now very concerned that the Russian military may try to take control of them. So we are working with Ukrainians so that they can prevent any of these research materials from moving into the hands of Russian forces if they approach, " Lenta.ru quotes her as saying.

Why are Americans trying to hide documents from those laboratories? This is not only about information that biological weapons could be developed there, which there is already a lot of evidence. Apparently, the political moment plays a role.

As our security officials managed to find out, the Pentagon was involved in financing the laboratories, but it passed through the Rosemont Seneca investment fund, headed by the son of US President Hunter Biden. And yes, according to our competent authorities, the development of biological weapons is really planned there. About this writes RBC.

Apparently, a significant part of the appropriations for this "settled" in the pocket of the president's family. Thus, such information can discredit not only the Bidens, but also the entire US political establishment as a whole.

And Ukraine in this context can be considered not only as a factor of geopolitical pressure on Russia, but also as the "stern base" of American leaders. And how to not recall the scandal with the Ukrainian oil and gas company

Of course, such information could open the eyes of many in the world to the events taking place in Ukraine. Especially if you raise the issue at the UN level. However, in doing this, Russia faced almost prepared accusations of misinformation by the United States and a number of its allies within the framework of the United Nations.

The Collective West "leaves no attempt to consolidate a monopoly on determining the future fate of mankind, to redraw the world according to its own patterns and to impose on others its understanding of what is good and what is bad. And replace the good with the bad, passing off the bad as the good, "explained Maria Zakharova.

Russia sees that Western countries do not abandon the idea of ​ ​ promoting an odious concept of the world order based on rules that imply the formation of non-inclusive rules for decision-making bypassing the UN. These rules are literally invented on the go and have nothing to do with the norms and rules enshrined in the charter of an international organization. Of course, all this will unbalance the UN and lead to a decrease in its international authority, the diplomat said.

Actually, the "erosion" of the significance and principles of the UN has been happening before our eyes for almost 30 years. After the US victory in the Cold War and the establishment of world hegemony (which is now a thing of the past), the UN has become another tool for imposing its agenda.

There is only one remaining complexity - the Security Council and the veto power that Russia has. And since there is no sole US power, there has long been talk that the UN is outdated, that the organization needs to be replaced, and Russia should be deprived of the right to veto decisions made by America and their allies.

However, real practice still shows that even within the UN, the United States cannot dominate. On March 2, the organization voted on a US-Ukrainian resolution condemning Russia for actions in Ukraine. 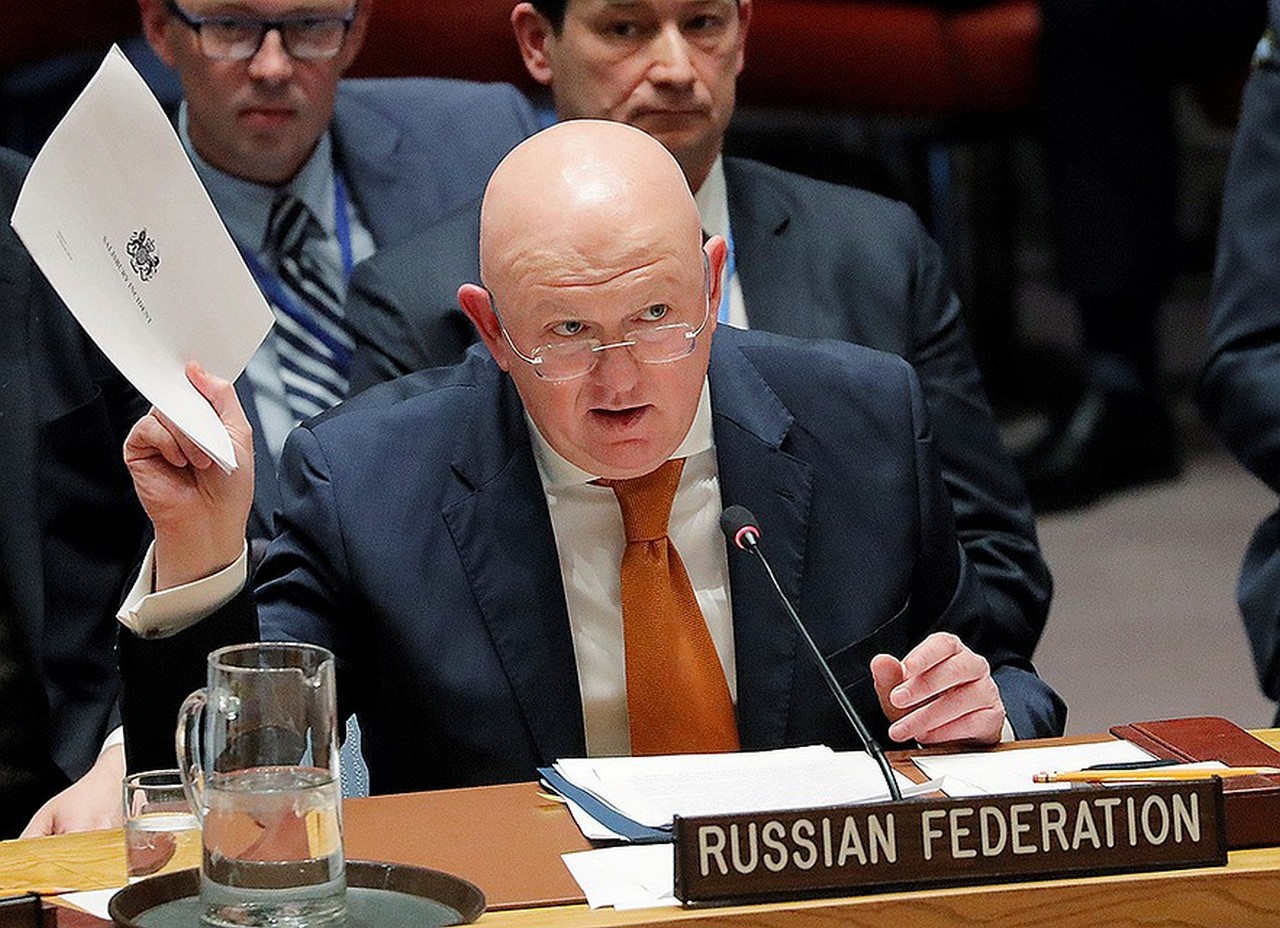 Despite all the provocations, the representative of the Russian Federation to the UN Vasily Nebenzya continues to defend the interests of Russia and international law with facts and documents in his hands. Photo: u-f.ru

It was successful for the United States, 141 countries voted for. However, there were 35 abstentions - and who is it? These are the USA, India, almost all of Asia and Latin America. In total, these are states that account for more than 50% of the world economy and 80% of the population. About that situation wrote the magazine "Expert."

Not like total American dominance. And it is not surprising that even if the role of the UN falls, the United States will try to replace it with a more cooperative organization. Meanwhile, Maria Zakharova emphasized this, Russia believes that a settlement of the Ukrainian crisis is possible only on the basis of UN principles.

Karabakh "to the noise"

Another important topic raised by our publication at the briefing of Maria Zakharova was the situation on the demarcation line in Nagorno-Karabakh, in Transcaucasia.

On March 26, the authorities of the unrecognized Nagorno-Karabakh Republic imposed martial law on its territory. The security agencies of the Russian Federation reported that the armed forces of Azerbaijan entered the area of ​ ​ responsibility of the Russian NKR peacekeepers. Then there were reports of the withdrawal of Azerbaijani troops, but they were refuted by the Azerbaijani side.

What is happening there is still not completely clear. But it is clear that if such a provocation took place, it was hardly without the role of Turkey, which is the de facto instigator of Azerbaijan to continue hostilities. Russia must be the guarantor of peace agreements.

Maria Zakharova noted that Russia urges all parties to ensure strict implementation of the trilateral agreements at the highest level of November 9, 2020 on a complete ceasefire and all hostilities in the Nagorno-Karabakh conflict zone. The Russian security forces and the command of the Russian peacekeeping contingent are taking vigorous actions to de-escalate the situation. At the same time, peacekeepers act strictly in accordance with the aforementioned statement of the leaders of the three countries.

"Through the Russian Foreign Ministry, we are in constant contact with representatives of Baku and Yerevan. We continue our efforts to normalize relations between Armenia and Azerbaijan based on the existing agreements of the leaders of the three countries, including with regard to the delimitation and demarcation of the Azerbaijani-Armenian border and the unblocking of economic and transport ties in the region. We will actively contribute to the conclusion of a peace treaty between Baku and Yerevan, "the diplomat also noted.

Apparently, diplomatic tact and good relations with all parties to the conflict did not allow Maria Vladimirovna to touch on the question - and why, in fact, these provocations have intensified right now?

Experts consider this quite obvious - just now Russia is busy conducting a special operation to protect Donbass in Ukraine, and this is a great time to catch fish in muddy water. Like, Russia now has enough problems without this. It's a misconception. The Russian Federation has enough strength and means to ensure the full implementation of its obligations and, even more so, if it concerns ensuring peace and tranquillity in the framework of a peacekeeping mission.

It seems that both Baku and Yerevan have made this clear, and so far there is no talk of increasing tension there. However, it is clear that the hidden beneficiary of the instability is most likely Turkish President Recep Tayyip Erdogan, a great friend and ally of Baku. And while he pretends to be a peacemaker in Istanbul, Turkish interests continue to probe Russia's reaction in Transcaucasia. This is a dangerous game that can cost Erdogan dearly. But Russia, as the guarantor of security in Nagorno-Karabakh, in any case should remain above the battle.