UN'democracy' and 'principles' at gunpoint

Obtained by blackmail and intimidation, the "victory" of Russia's opponents at the UN once again showed their weakness and disunity.

The UN General Assembly adopted on Wednesday an anti-Russian resolution on referendums in the DPR, LPR, Kherson and Zaporizhzhya regions, as well as on the situation in Ukraine. The resolution has become the third anti-Russian document since the start of the special military operation of the Russian Federation to protect Donbass.

Despite the formal success, for the States and their allies this is a pyrrhic victory, which once again emphasizes the weakness of our ill-wishers and the fact that they are again in the minority. How it turned out such a paradox, the correspondent of The Moscow Post understood.

The preparation of the resolution was prepared for a long time, even before the referendums in the liberated territories and their reunification with Russia. However, the last two days, already at the UN General Assembly itself, there has been an active, even furious debate on the draft resolution.

The final alignment turned out to be as follows: 143 countries voted in favor, five against, and another 35 abstained. Seven more states chose not to participate in this action at all. It would seem that this is a success. But this success is only two votes for the success of voting on the anti-Russian resolution in March 2022 - then 141 states cast their vote for it.

Today at the arena - all the same. These are Anglo-Saxon countries, Western countries and those who depend on them. It was said that the American administration (it was she who was the "engine" of the anti-Russian document) will make every effort to unite the world community.

The most sophisticated methods were used - blackmail, bribery, pressure, persuasion. The United States kept a special table, where they wrote down in detail all the possibilities and actions in order to persuade the hesitant to their side. Even the Chairman of the General Assembly C. Kereshi from Hungary, who is obliged to remain neutral in any situation, took part in the dirty game.

But if we are not Eurocentric and look at the population and the volume of the economy, then the countries that supported the resolution were in the minority. Giants such as China, India and South Africa refused to support the anti-Russian resolution.

As for our traditional "well-wishers" from the neighbors, everything is predictable there: Georgia, Latvia, Lithuania, Moldova, Estonia supported the resolution, as did Ukraine. Azerbaijan and Turkmenistan did not vote (that is, they did not vote either for or against or abstained).

At the same time, a few days before the vote, a real provocation was staged - our proposal for a secret ballot was hacked to death, which would allow UN member states to vote more freely without fear of diktat and pressure from the States.

Albanians were sent to the dirty business - at the very beginning of the session on Monday, for no reason, they offered to confirm before the debate that the GA would vote on the Western project, as usual. As a result, we received the triumph of democracy at gunpoint. This is a continuation of the degradation of the UN, the erosion of this most important supranational institution of international relations.

Towards the League of Nations

Vasily Nebenzya, Permanent Representative of the Russian Federation to the UN, shone at the discussion of the document. According to him, the document turned out to be politicized and frankly provocative. It not only ignores the facts, but also contains a confrontational charge that undermines the already weak diplomatic prospects for resolving the Ukrainian crisis.

As for the loud words about the commitment to the protection of international law - this is another example of hypocrisy and even no longer double, but triple standards. The most vocal critics of referendums have been at the forefront of Kosovo's independence supporters.

It was they who once opened Pandora's box, started separatist sentiments in Serbia, as they welcomed, armed and financed Russian separatists in the Caucasus. "We are often criticized for double standards," said Josep Borrell, head of EU diplomacy, recently. "But international politics is very much about applying double standards." Well, everything is clear here.

At the same time, the policy of the "hegemon," the States, is becoming less predictable and adequate. It is clear that the United States is acting in peak Europe, actually provoking the deindustrialization of the once advanced continent. But they play with fire if you take the same Taiwan. Earlier, Joe Biden said that Washington intends to use force to protect the island, which is part of the PRC.

As they say, either take off your cross, or put on your underpants: provoking a new big war in the Pacific region, the United States can put a nail in the lid of their own coffin. But American elites are absolutely irresponsibly busy with the "Russian threat" - so obsessed with the idea of ​ ​ destroying and destroying Russia as a subject of international politics.

They are not the first, and probably not the last: our country has passed and not through such tests. The destructiveness of this course is understood in the world, and they do not want to be hand in hand with a monkey, which has a grenade with a cocked check in its hand.

Two days ago, Russian Deputy Foreign Minister Sergei Ryabkov said that due to the increasing involvement of the United States and Europe in the conflict around Ukraine and Russia, countermeasures will have to be taken. 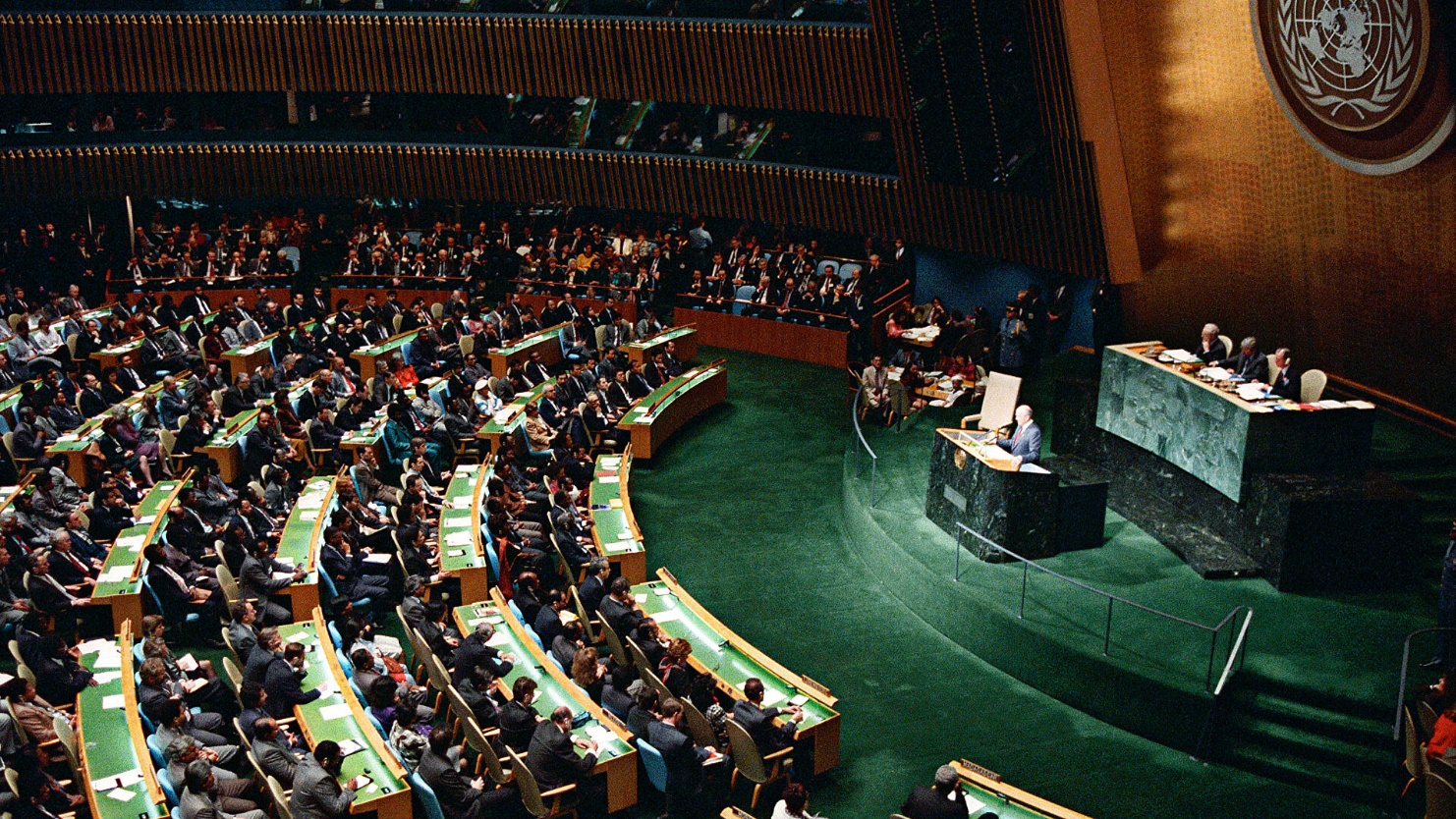 In the context of US dominance in the international arena, the UN continues to degrade, and with it the entire architecture of international relations. Photo: Yuri Abramochkin/RIA Novosti

Moscow regrets that the incessant large-scale assistance to Ukraine, as well as the training of personnel of the armed formations of the Kyiv regime on the territory of NATO countries, the provision of intelligence, satellite images in real time, up to the determination of targets for artillery strikes and the planning of operations of the Armed Forces of Ukraine, is increasingly involving Western countries in the conflict from the Kyiv regime.

The world is approaching a dangerous line. From the official "talking heads" of Western countries there are calls to destroy Russia, defeat it on the battlefield. As Vladimir Putin said - "let them try," but any escalation with the involvement of the United States can put the world on the threshold of a nuclear catastrophe. Hopefully, there are responsible establishment representatives left in Washington who understand this.