Ukraine: sovereignty in exchange for "candidate"

The status of a candidate for joining the EU for Ukraine is like a carrot for a donkey, and is not connected with objective economic processes and the rapprochement of the two sides, but exclusively with the political situation.

Russian Foreign Ministry spokeswoman Maria Zakharova gave another briefing at which she answered questions from our journalists. The Moscow Post reveals the context of Maria Vladimirovna's speech, taking into account the latest changes in the international situation.

The main topic is the integration of Ukraine's unfriendly Russia into the supranational structures of the EU no less unfriendly to us.

Tomorrow there will be a summit of this organization, the result of which, most likely, will be the approval of the status of a candidate member for Ukraine. At the same time, any sane person understands that this is only a symbolic step that the really former Soviet Republic will not bring closer to membership in this organization.

Maria Zakharova relays the position of the Foreign Ministry, which was announced earlier - including at the highest level. Russia does not object to Ukraine's admission to the European Union, because it is an economic organization. But both Zakharova and Foreign Minister Sergei Lavrov, and other top-ranking officials cannot but understand that in the current conditions the European Union is rapidly losing subjectivity, and can no longer be considered exclusively as an economic entity.

The fact that the EU countries are massively supplying heavy weapons to Kyiv suggests that Ukraine's accession to the EU is not at all harmless. Foreign Minister Sergei Lavrov also spoke about this: today the EU is a geopolitical project, and the United States "crushed" Brussels for itself.

At the same time, the decision of the European Commission to recommend granting Ukraine the status of a candidate for the EU will lead to the fact that neo-Nazis will receive support, and the country itself will eventually be turned into a raw material appendage of Europe, said former Prime Minister of Ukraine Mykola Azarov. At one time, he was forced to leave the country due to threats to his life and health after the coup. His position is quoted by RIA Novosti.

According to Azarov, about 10 years ago (i.e., just at the time when Euro 2012 was held in Ukraine), European officials told him that even after a number of serious reforms in Ukraine, the question of its membership in the EU could be raised no earlier than in 25 years. One of the requirements, Azarov noted, was always the fight against corruption.

"In the eight years since the coup, corruption has taken on a total nature, a total scale, that is, it has covered absolutely all spheres, primarily state life. It covered members of parliament, the Supreme Council, the presidential administration, the government, "the former prime minister explained.

Mr. Azarov may be right, but I would like to answer with the words of the Deputy Head of the Security Council of the Russian Federation Dmitry Anatolyevich Medvedev in his telegram: who will give a guarantee that in the coming years Ukraine will be on the world map at all?

Given the suicidal policy of Kyiv, there may not be any Ukraine there. Not to mention the situation on the Ukrainian-Polish border. The Polish leadership is already talking directly - there will be no borders between the countries. Only he hardly means the visa-free regime of free movement, which is in the European Union itself.

Of course, the Poles dream of "Eastern Crosses" and systematically go to their goal. To do this, you need to arrange the collapse and division of Ukraine itself.

Most recently, the Secretary of the Security Council Nikolai Patrushev spoke about this. He believes that Poland and the West offer Kyiv rapprochement out of selfish motives, hoping to seize the western territories. RBC quotes his words. 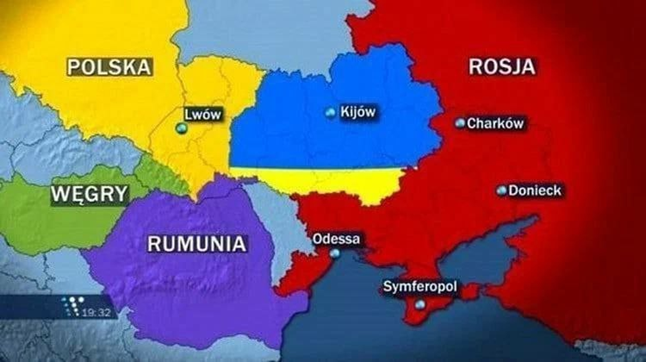 This map flashed in one of the plots of Polish TV. It seems that they do not believe in the preservation of Ukraine within the previous borders. Photo: Open Sources

The threat from Poland was previously reported by both the head of the SVR Sergey Naryshkin and the former president of Ukraine Viktor Yanukovych.

Another moment is very soon, on June 28-30, the next NATO summit will be held in Madrid. The main topic will be the Russian special operation to protect Donbass, or rather, the alleged "threat" emanating from the Russian Federation.

It is assumed that at that summit Russia will be identified and included in all official documents (first of all, the strategy that they are going to adopt) as "the most serious and immediate threat," while China will be designated in another list - "threats to peace and stability."

The supply of weapons for Ukraine will also be discussed there. By the way, this process is increasingly reminiscent of the sabotage of Western politicians, which is complained about in Kyiv. Only four modern MLRS installations from the United States in the latest package were perceived as outright mockery.

It is noteworthy that there is no talk of Ukraine joining NATO at all - they kind of forgot about it a little. At the same time, experience and practice have shown that Ukraine does not have to be taken into NATO, because the military development of this territory by the Alliance is already underway - President Vladimir Putin said this earlier.

The naivety of Ukrainian citizens who, according to a number of polls, expect to join the European Union in a few years. Meanwhile, the status of a candidate is just a PR engine that does not bring Ukraine closer to EU membership one step.

Recall that Turkey - a member of NATO, by the way, without territorial unresolved issues, has the status of a candidate for joining the European Union since 1999 - that is, about 23 years. Against this background, Ukraine's accession to the EU is unrealistic even in 30-40 years.

Why then all the cheese-bor? Political manipulation, a carrot and stick strategy, where the mythical prospect of joining the EU appears in the form of a carrot. What is even more interesting, the European Union can cancel the status of a candidate at any time - if Ukraine suddenly violates its obligations. Which ones? This is also decided by the European Union.

What is even more sad for Ukrainians, previously there were no such conditions in any of the conclusions of the European Commission on applications for membership from other states. By the way, the requirements for Ukraine are known - seven blocks of reforms, each of which to one degree or another implies the loss of part of national sovereignty.

The conclusion suggests itself simple: the situation with the admission of Ukraine to the EU candidates is not connected with objective economic reality and development. This is due solely to the political situation.

"There are not even criteria that the EU members themselves could offer to the audience to explain their steps. Or these criteria contradict the criteria stated six months ago. Or those factors for which the membership of other countries in the EU was refused or approved.

The criterion for that and the criterion, it must be unified. This is much like manipulation, which EU countries also do not hide. They say they want to live in a rules-based world order. The rules that change during the game, and not on the law, which does not change based on the political situation, "said Maria Zakharova. 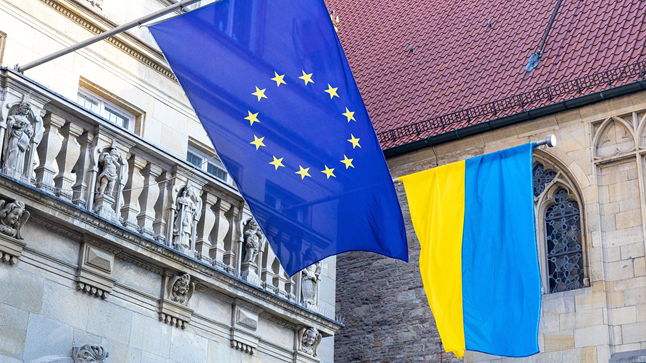 The EU and the Anglo-Saxon states behind it continue to speculate on the topic of Ukraine's possible accession to the EU. Photo: Izvestia

She, and many international experts, has no doubt that the Anglo-Saxon states are not behind these processes. First of all, the United States. And their common strategy may be to systematically weaken the European continent as an alternative center of power. The States and the United Kingdom are interested in a possible confrontation between Europe and Russia or even China.

Finally, I would like to say something else: today there will be a meeting of the heads of state of the BRICS - Brazil, Russia, India, China and South Africa. These countries did not impose sanctions against the Russian Federation and are increasing trade with it in liquid Russian goods - grain and oil. And this is the reality, the alternative to which hesitant players on the world political stage are increasingly reaching out. And our former Western partners will have to reckon with that.

Well, Ukraine - wait for joining the EU until the second coming. And even then it is not a fact that they will wait.