Does Donald Trump dream of becoming a "lifetime" President?

As the correspondent of The Moscow Post reports, the degree of civil confrontation following the results of the last presidential election is not subsiding, but only increasing in the United States.

Donald Trump issues angry tweets one after another: in the last one, he accused the Democrats that they won the election only in the eyes of the "fake news media" — the false, according to the American leader, media.

The way Trump was treated in this election had a sobering effect on many analysts who saw the United States as a fortress of true democracy. Mass falsifications, pressure through the corrupt media and sticks in the wheels in their own administration - the entire huge machine of the American establishment is thrown against the rebel from the "Trump tower".

Officially, Trump lost the election, although he will be in office for another two months. But he's not going to give up.

Moreover, many believe that he intends to avenge the country taken from him by the Democrats. Not to mention the millions of Americans who voted for him in both 2016 and 2020. They feel cheated along with him, that is, he has a broad social base for any of his tricks. 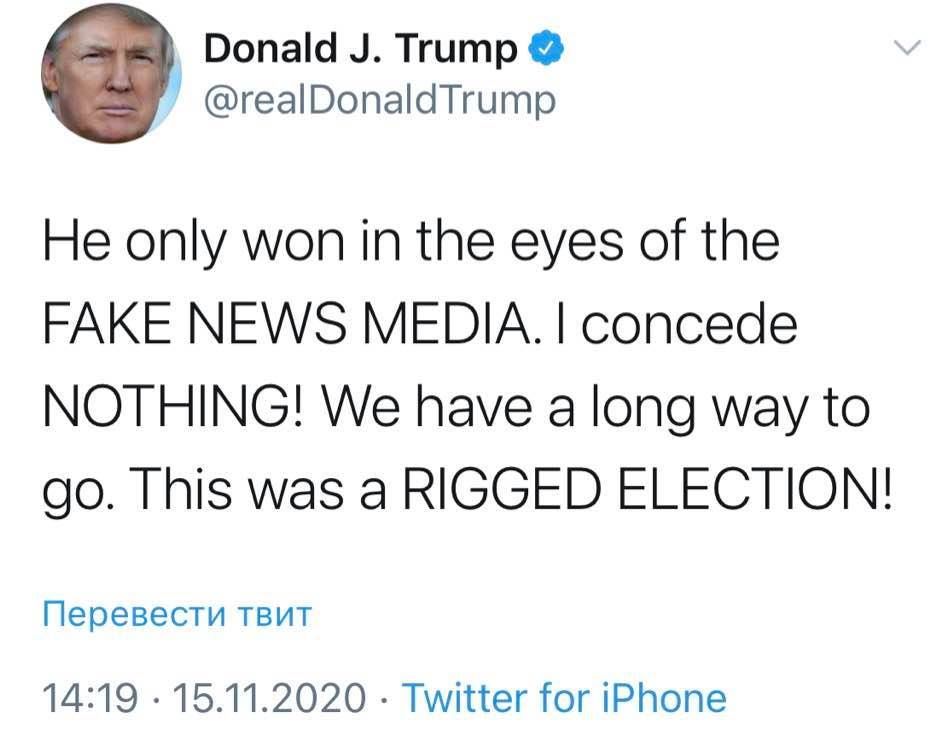 One of Trump's last tweets, where he says that Biden won the election only in the eyes of the fake news media. "We have a long way to go," Trump writes.

Last week, on November 13, Attorney General Barr ordered the Justice Department to investigate cases of election fraud across America. There are good legal reasons for this. The day before, it became known that a recount of votes would be held in one of the key states: this procedure was started in Georgia on November 12. And this is after all the democratic media had discussed Biden's victory, when he received dozens of congratulations from countries around the world.

Back on November 5, Trump said that the election commissions in the States where he first won, and then began to sharply lose ground, are led by members of the Democratic party. We are talking about the same Georgia, Nevada, North Carolina and Pennsylvania. As a result, these States gave the final alignment in favour of Biden.

"NO VOTE WATCHERS OR OBSERVERS allowed, vote tabulated by a Radical Left privately owned company, Dominion, with a bad reputation and bum equipment that couldn’t even qualify for Texas (which I won by a lot!), the Fake and Silent Media, and more!" - said Trump following the results. His words are quoted by Gazeta.ru.

Why do we give all these circumstances in such detail, when, it would seem, it is too late? After all, experts agree that even if violations are recognized by the court, no one will let Trump into the presidential chair. Even if there are clashes in the streets.

It's all about the personality of the 45th President of the United States. His temper, character, resources and reaction to what happened say one thing - he will definitely do everything to take revenge. And these four years will be even more hell for Biden and his supporters than the Trump years, tainted by the persecutions and accusations of Democrats. This means that the US has big problems.

Statements to the courts and the reaction of the Prosecutor General is the beginning of the "rocking" of the American "boat", which has already given a hole. American society was divided on a number of grounds. The centuries-old problem of racial and social discrimination has surfaced, and the Black Lives Matter movement has raised the degree of civil confrontation so much that armed national guard patrols are appearing on the streets of US cities. When was the last time this happened? After the flood in New Orleans, perhaps.

Trump represented America that was willing to make compromises for the sake of the common welfare, even if not everyone liked them. Biden's America is a country of a victorious minority, and this minority will pursue "Trumpists" in favour of an even smaller social group - the democratic establishment and the financial and industrial groups behind it. First of all, of course, the so-called Soros group.

But Trump took a number of measures in advance so that he had advantages in this confrontation. Shortly before the election, he appointed his own U.S. Supreme court justice, Amy Coney Barrett. After the scandalous and feminist Ruth Bader Ginsburg, Amy Barrett was considered as a conservative hero who should restore the balance of power in a fairly "leftened" American society. Novaya Gazeta wrote about the appointment of the judge.

Of course, her candidacy caused a real scandal in the team of Democrats, leftists and other BLM, and today it became clear that she will play on the side of Donald Trump, at least only because she is under serious pressure to implement a different scenario. But this isn't Trump's only person in the Supreme court. After all, in 2018, he has already completely passed his man, conservative judge Brett Kavanaugh. This was reported by TASS.

Even then, experts said that Kavanaugh would leave a conservative mark on the US air force for decades on. But that was before the coronacrisis, the BLM movement, and the scandalous presidential vote count. In view of these circumstances, two judges of the Supreme court who are completely loyal to Trump can give him serious support and help legitimize his actions.

On another front, foreign policy, Trump is also preparing a serious "bomb" against the Democrats. He is one of those US leaders who were not afraid to rattle weapons and get into other countries with war, and also to engage in a role-playing economic and trade confrontation with a real Dragon - the People's Republic of China.

Realizing that the Democrats would take away his seat, he prepared a new package of sanctions with China.  Izvestiya wrote about this. Why is Trump doing this? It will be difficult to lift the restrictions because of the Republican position, but even so, the leaving leader's foreign policy logic will be continued. 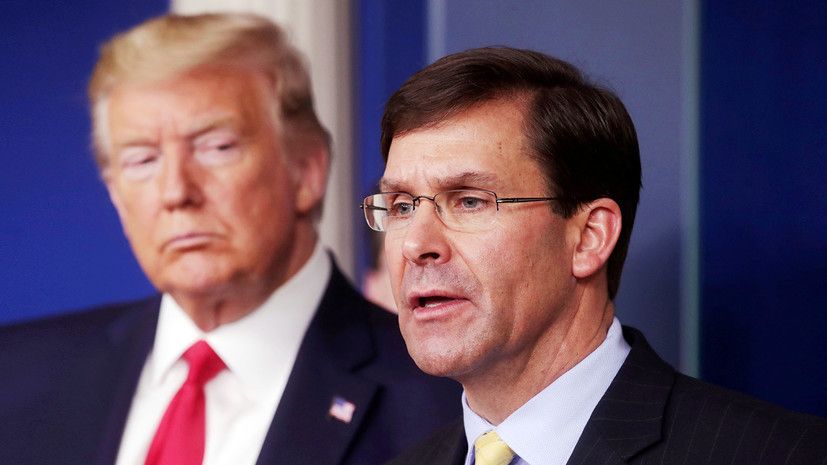 The former Head of the Pentagon and the obvious detractors of Trump, Mark Esper, was preventively removed from the control of the power unit. Is Trump preparing for the intensification of the struggle?

In the same context, Trump should think when appointing a new Defense Secretary. Instead of the former Head of the Department Esper on November 9, Trump appointed a new one - Christopher Miller, the respected Director of the National Counterterrorism Centre.

He is a compromise figure for many law enforcement agencies of the United States. If he is dismissed in just a couple of months by Democrat Biden, it will inevitably cause a negative reaction. Trump seems to be provoking the new leadership of the country. If the Democrats were fishing in the murky waters of the corona crisis and racial issues, why can't Trump use the same methods?

Like the cherry on the top, Trump's talk of running for President in 2024. This was reported by TASS. What does it mean? That the network of severe contradictions, economic and even moral crisis, in which the country will be run by Biden, will give Trump every opportunity to show himself again.

But will the America we've known before stand up to this? Most likely, it will be completely different. Perhaps one that will find the best way for the whole world to cooperate, rather than confront with the same Russia and China.