Tragedy in the Dnieper: Ukrainian PR on blood

The monstrous tragedy in the Dnieper, which was the result of the "curvature" of the Ukrainian air defense, is used by Kyiv to inflame anti-Russian hysteria.

It is known that Russia uses only precision weapons for missile strikes. A residential apartment building could not have been the target of the attack. Nevertheless, the Ukrainian authorities accused Russia of targeting a civilian object, although immediately after the strike they said that the destruction was the result of the work of their own air defense.

The rubble in the Dnieper continues to be dismantled today, after two days. More than 30 people were killed - civilians who were at home on the Old New Year. The editors of our publication express deep condolences to the relatives of the dead and injured people.

The tragedy stirred not only Ukraine, but also Russia. Not a single normal person remained indifferent to this grief, although, frankly, there are enough "holy fools" in any country.

Some remembered how part of Ukrainian society mocked people who burned down in the House of Trade Unions in May 2014, the dead musicians of the orchestra named after Alexandrov, other tragedies. But only cannibals can gloat for such reasons.

At the same time, what exactly happened in the Dnieper remains unknown, since in two days the Ukrainian authorities did not provide the general public with fragments of a rocket that allegedly hit the house. At the same time, immediately after the incident, the adviser to the Office of the President of Ukraine Oleksiy Arestovich said that the situation was a consequence of the work of the Ukrainian air defense - they say, it shot down a Russian missile, so it fell on the entrance.

There is another version - that the anti-aircraft missile fired at the Russian shell went off course and crashed into the house on its own. However, the warhead of neither the Russian Caliber nor the Ukrainian anti-aircraft missiles would S-300 be enough for such a scale of destruction. Probably, an explosion of household gas could have occurred from the blow.

In both cases, it turns out that the calculations of the air defense of Ukraine are located in residential buildings. This can only be done with one goal: to make it difficult to identify and attack Ukrainian air defense from Russia. As a result, the Ukrainian side endangers the lives of civilians.

But what began later, after the statement of Alexei Arestovich! It turned out that it completely goes against the "general line" of the Kyiv "party." They insist on Bankova - Russia, like a maniac, simply decided to kill civilians. And such obviously false rhetoric is used for one purpose - to increase anti-Russian hysteria and provide a reason for its Western curator to increase military support for Kyiv.

The blogosphere bitterly jokes that the only time in his life Alexei Arestovich told the truth, and even then by chance. But he had to immediately abandon his words: the truth in Kyiv is not in honor. And the scandalous adviser to the President's Office, as they say, "turned on the back" - said that he was mistaken, tired, and, of course, the Russians were to blame for everything.

But it was too late - his statement went to the media. Therefore, a real campaign of persecution was launched against Arestovich, accused of a Russian spy. Dnipro Mayor Boris Filatov called on the SBU and Ukrainian counterintelligence to "respond" to the statements of the adviser to the office of the President of Ukraine, calling him "narcissistic cattle" and "garbage mouth." Recall that earlier the same person called for hanging Russian people.

The scandalous politician Alexei Goncharenko, known for changing political positions depending on the current situation, even called for opening a criminal case against Arestovich for treason.

According to sources of The Moscow Post, the target of the missile attack was supposed to be the Dnieper hydroelectric station, which was hit earlier. Note that during the day before yesterday she, as far as is known, did not receive damage.

In order to issue a digestible version, the Ukrainian side, instead of providing rocket fragments, stated the following: the attack was carried out by a Kh22-type missile. At one time, such missiles were developed to strike at aircraft carrier groups of a likely enemy.

Its possible deviation from the target is 600 meters: an extremely convenient version for the Ukrainian side. As far as is known, the Dnieper hydroelectric station is at a greater distance from the scene of the tragedy. At the same time, the command of the Armed Forces of Ukraine also stated that Ukrainian air defense systems do not have the capabilities to destroy such missiles. Which, according to Kyiv, was supposed to prove Russia's malicious actions.

The catch is that earlier the Ukrainian command repeatedly reported that such missiles were shot down in Ukraine. When netizens drew attention to this, the Ukrainian military found nothing better than to say that all previous reports of the destruction of Kh22 on the approach were erroneous.

That is, the Ukrainian side is literally confused in its own testimony, superimposing one lie on another - it is becoming more and more difficult to distinguish the truth. Some people even believe that Kyiv itself could have staged a terrible provocation to blame the Russians. However, such a version still seems unconvincing - it is much more likely that the tragedy was the result of the "curvature" of the Ukrainian air defense.

Be that as it may, the tragedy is actively used by Kyiv to inflict anti-Russian hysteria, as well as as a reason to ask its Western curators for more weapons and money. The day before, Britain announced that it would supply Ukraine with Challenger tanks of old modifications. There is an active discussion about the provision of German Leopard tanks to Ukraine.

At the same time, a duck was launched on the supply of American Apache combat helicopters to Kyiv in the amount of four pieces. This information has already been denied, however, it seems that this is only a matter of time. At the same time, 100 fighters of the Armed Forces of Ukraine are being trained in the United States, who are taught to control the Patriot air defense system: Washington promised to supply two batteries of such guns earlier. 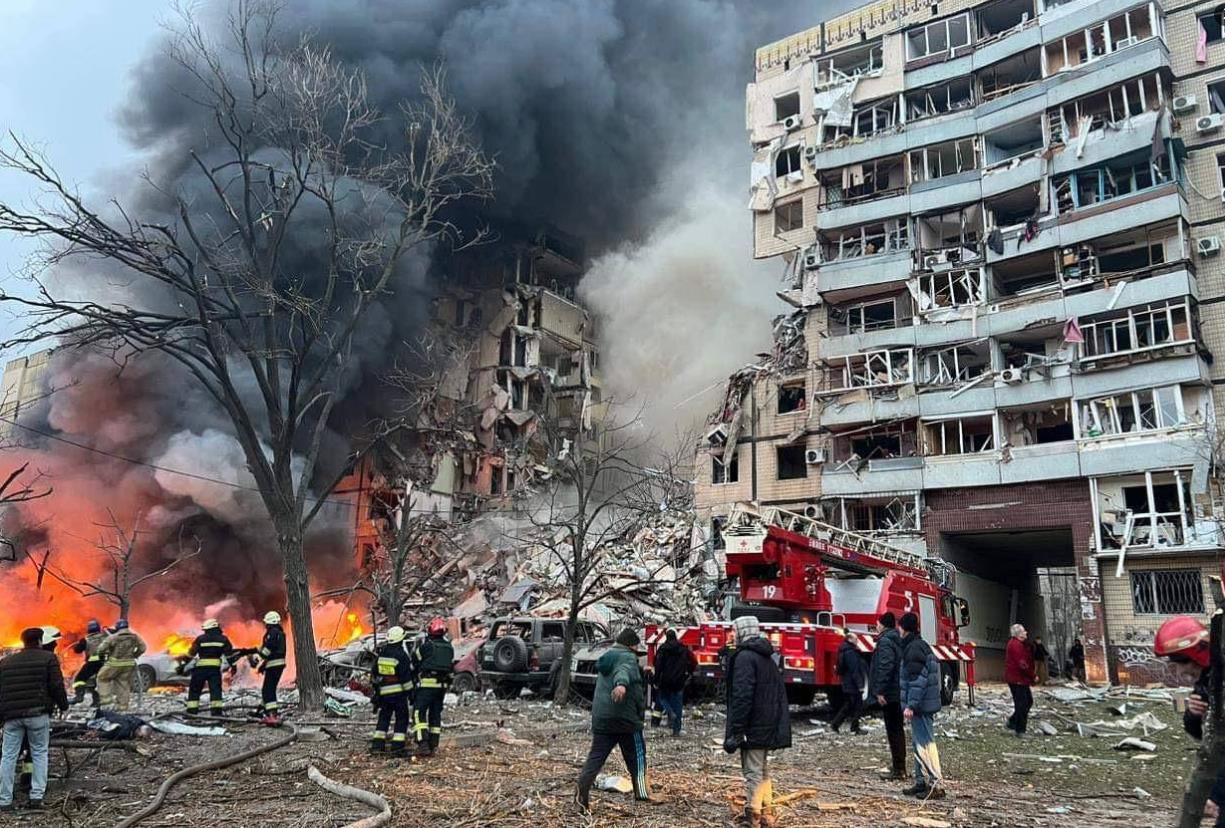 Given this, the tragedy in the Dnieper turned out to be extremely beneficial for the Ukrainian side. In Ukrainian patriotic communities, a wave of hatred and humiliation of Russians is accelerating. And in major cities, there is a new campaign to recruit soldiers. People are grabbed right on the street. In the pre-New Year days, it got to the point that the workers of the military registration and enlistment offices disguised themselves as Santa Claus and Snow Maiden in order to get closer to unsuspecting citizens.

Earlier, the representative of the Center for the Study of the Russian Federation at the East China Pedagogical University, Cui Heng, suggested that if Western heavy weapons fall into Ukrainian combat positions, this "will mean a long-term impasse" for those participating in the conflict.

Apparently, this is exactly what the overseas masters of the Kyiv nationalists need. The question is, why does Ukraine need this?