To Europe full pipe: as the new sanctions package will affect income of Russia

The sixth sanctions package is Europe's shot in the foot, which will only increase Russia's revenues from energy export, but will not stop the military-technical cooperation to protect Donbass.

As the correspondent of The Moscow Post reports, heads of state and government of the European Union agreed on the sixth package of sanctions against Russia which includes, in particular, disconnection of Sberbank from the international system of transfer of financial messages SWIFT and the ban on broadcasting the EU of three more Russian state media.

Allegedly, exactly this step, according to the president of the European Council Charles Michel, has to help to stop financing of "the Russian military vehicle". Read - to force Russia to refuse conducting the special military operation on protection of Donbass. But it is important to understand - first, 10% of deliveries will remain. And they fall on underground pipelines.

And two - the similar decision should will stop financing of "the Russian military vehicle". Actually these restrictions - profanation which will expensively cost, first of all, to the European Union.

Against the background of enormous external pressure Russia because of risks itself refuses the western power market, promptly reorienting export streams on the East. At the same time, in connection with a number of factors (SVO and sanctions in their row, of course, not the last), oil cost in the market grows. And as if on gas, at decline Russia replaces loss of income due to notable growth of the price.

On oil it isn't so felt - however, since February 24 prices for Urals approached 120 dollars for barrel. Specifically as of night on May 31 against the background of news about sanctions the cost of oil of this brand "jumped up" up to 118 dollars for the first time since March 25. And it is, of course, not a limit.

From these 2.4 million barrels a day on a pipe there were 800 thousand and according to 1.5-1.6 million by sea, i.e. sea export makes two thirds of export of crude oil to Europe. Sea export from Russia is forbidden by the sixth package of sanctions.

What occurred after the beginning of SVO? Russia increased export of crude oil on 350 thousand barrels from February 25 to May 27 concerning the period from January 1 to February 24. But more significant changes occurred since April 1 when it was succeeded to adjust supply chains to Asia, from this point and till May 27 the export of oil grew almost by 600 thousand barrels.

At the same time, export of the Russian oil to Europe was reduced more, than by 1 million barrels in декнь. All this dropping-out volume was "removed" by India, from above added China, having increased deliveries on average by 300 thousand barrels a day, and about 180-200 thousand more drift in floating storages in the Mediterranean sea, expecting future Asian buyers. Sweat therefore was increased by deliveries to 500-600 thousand barrels.

As for sea deliveries - that now by sea goes about 400 thousand barrels a day to Europe. That is Russia already so almost got rid of Europe in respect of supply of crude oil by the sea. But even if and volume will completely be nullified, the general deliveries taking into account the Asian market will remain at the level as SVO. But only with the far bigger price. And even at large discount for the same India on our oil Russia remains in enormous plus - she earns from energy export more, than prior to the beginning of SVO! 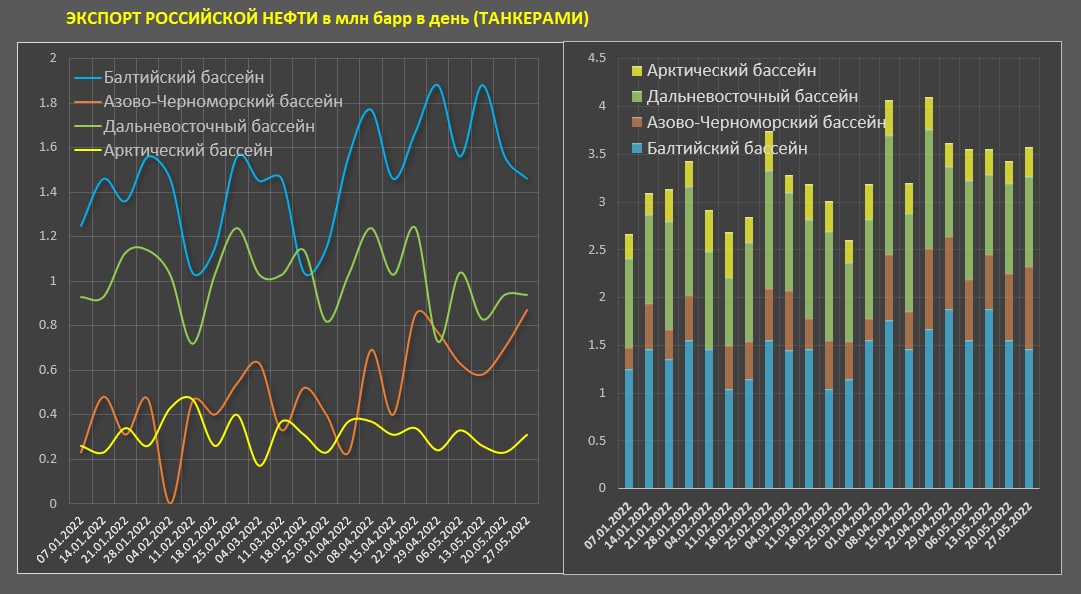 Since February 24, Russia has not reduced, but, on the contrary, increased oil exports by sea. Photo: Open Sources

What's next for the EU and the US?

It is already difficult to figure out who is making it worse for whom, and who really wants the completion of the SVO, and who expects the operation to last as long as possible - for as much damage as possible to all interested parties. In this sense, it does not leave the feeling that the sixth package, the ban on oil, etc., has been directed in the United States.

By the way, the States themselves a few months ago categorically refused to purchase Russian oil. Against the background of other circumstances, this led to a sharp jump in the cost of fuel in the United States itself. The result is a catastrophic drop in Biden's rating - he is now balancing around 30%, and this is the lowest figure for US presidents in many, many years.

Republicans did not fail to take advantage of rising prices and the fuel crisis. And now at almost all gas stations in the country, next to the gas price scoreboard, you can see stickers with a photo of Biden and the inscription - "I did it!" At the same time, protests continue, both in the United States and in Europe. Particularly strong strikes took place in Italy and France.

These protest sentiments will only grow as European governments, at the behest of the US and UK, continue to shoot themselves in the legs.

At the call of the leading consumer associations in Italy, on June 10, mass demonstrations of protest against a sharp increase in prices and tariffs will be held in the largest cities of the country, which cause huge damage to citizens and the entire national economy. RIA Novosti writes about this. And by the fall, against the background of unemployment and other "joys," such actions can acquire an indefinite character.

According to the authors of the telegram channel Spydell_finance, allegedly the European Union chose an extremely unsuccessful time for such restrictions - precisely due to the above circumstances with crisis phenomena and discontent of people. Since July, the printing press has been turned off in Europe, at the same time, record inflationary pressure is expected there for 40-100 years (depending on the country), which actually completely affects the debt market. Capital will corny escape from the EU.

At the same time, the strongest combined energy crisis, the food crisis and soon the migration crisis in the wake of hunger riots and political destabilization in Africa near the end of 2022-beginning of 2023 are being actualized. 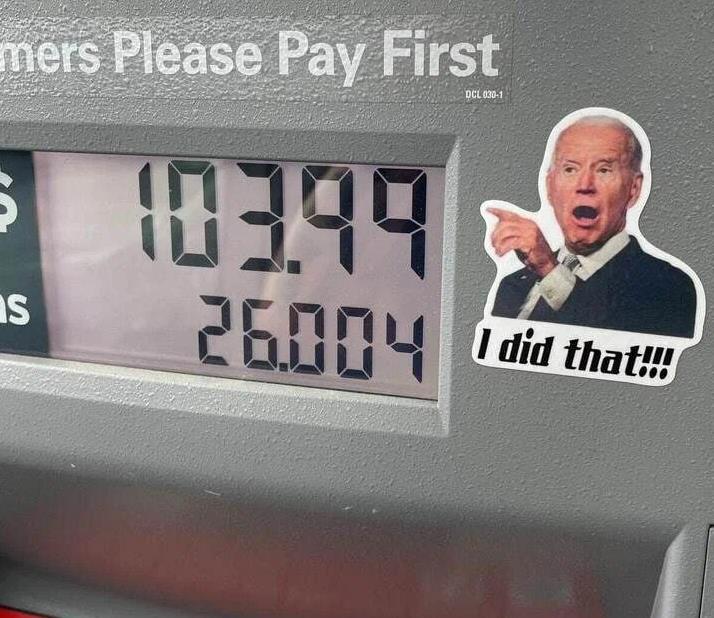 The inscription on the scoreboard with the price of gasoline on the sticker with Biden: "I did it!!!" Photo: archive.4plebs.org

At the same time, the food crisis is getting closer and closer, and Ukraine's European partners are exporting grain from the country to the whole. It got to the point that Russia was accused of problems with grain export - as if it had mined the Black Sea near Nikolaev and Odessa. Russia has already proposed options for the export of grain through the mediation of Turkey. At the same time, the United States has so far refused to supply MLRS to Ukraine with a range of hundreds of kilometers - that is, those that can reach the territory of Russia.

In the expert environment, two of these events are already connected - they say, Russia and the United States have made some kind of deal on this issue. Only Ukraine remains in the red, without money, without grain and fuel. Moreover, Ukraine with a blurred sovereignty handed over to its "partners."

And what will the EU say when, after the introduction of new restrictions, their economy will suffer and collapse, overpaying for energy resources three to five times, and Russia will only increase its income? One thing is clear - you still have to negotiate with Russia.