"TikTok" of the brain: is Russia to blame for everything?

Bare Russophobic policies have already led to the largest energy crisis in the United States and Europe - and this is only the beginning. Ahead are mass strikes and bankruptcy.

According to the correspondent of The Moscow Post, Russia's military special operation in the Donbass and the associated unprecedented pressure from Western countries through sanctions have already hit the Western economy. And not only on the economy - the response of the same US beats and, as they say, on the brains. On the eve it became known that the Americans are launching a whole campaign in social networks, especially in the new-fashioned TikTok (the main audience is young people) in order to explain why the price of automobile fuel has jumped so sharply.

The cost of gasoline and other fuels at American and European gas stations breaks records. So much so that in the United States, next to the price, stickers with the inscription "Biden did it" began to glue at bulk stations. This, of course, is about a ban on the import of Russian oil and gas, which the United States calls for other countries. But this can end with a social explosion - it is already planned.

The US administration held a number of group calls and other events at which it diligently explained to American youth about the situation in Ukraine - who was to blame for it (as you can guess, Russia represented it), as well as who was to blame for the sharp jump in prices. 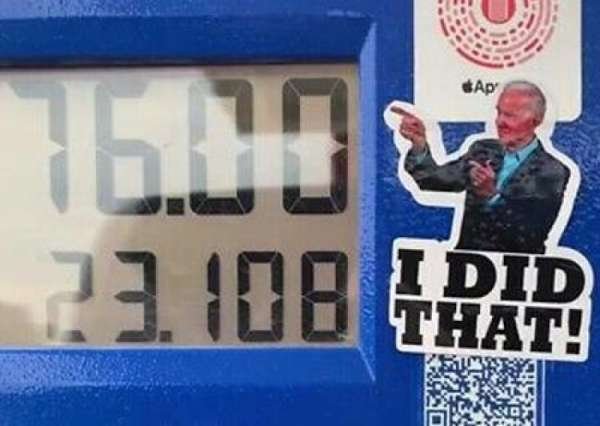 Because of sharp jump in prices of fuel in the USA the real epidemic with stickers on behalf of Biden "I made it". Photo: 3mv.ru

"We understand that it is extremely important resource by means of which the American public learns about the latest events therefore wanted to make sure that you have the freshest information from an authoritative source", - the director of the digital strategy of the White House Rob Flaherty noted, his words are quoted by Lenta.ru.

To fool all it won't turn out

Theses are introduced in the heads of younger generation that the USA allegedly tried to prevent what occurs in Ukraine. Forgetting, for some reason, that the USA supported a coup in this distressful country in 2014, and then and actually genocide of the people living on Donbass. Sanctions which were imposed hastily against Russia had to bring down instantly her economy, also considerable gold and currency reserves were frozen.

But instead of crash Russia keeps, but in the USA and Europe obviously didn't expect that consequences will reach them so quickly. Moreover - not everyone managed to be fooled even in that notorious TikToke. For example, one of participants of a group discussion, the blogger Kalil Green from 500 thousand subscribers carried out own analysis of a conversation and flayed the White House for non-recognition of own participation and communication with "occupations, invasions and in general unfair actions worldwide".

But all this that is called lyrics and attempt of information maintenance of the actions. At the same time, it and attempt to score political points on the most true russophobia. As Telegram channel of the Russian Embassy is noted in official, the image of the external enemy acting through our country is necessary to ruling circles of the USA for justification of own failures in the solution of the intra-American problems.

There prefer to hide that the true reason of record inflation - not provided trillionth financial injections in economy and the same sanctions wars against the objectionable states. Washington forgot to tell "influensers" who will incur a lie now worldwide that Russia always was and remains the reliable supplier of energy resources who proved it decades of mutually advantageous partnership now.

Even during the most difficult, difficult periods of Cold War Russia, then the USSR, I didn't stop delivery to Europe and other regions of the world. And in this case, at all not Russia refused cooperation in supply of fuel to the USA. Biden's Administration, ignoring interests and needs of own citizens, I stopped buying hydrocarbons from the Russian Federation.

It would seem, all on a surface, but not all on the contrary for the Empire of the Lie as Vladimir Putin christened the USA. And this attempt - continuation of enormous information war against our state.

On the grandfather Sholts's precepts

Meanwhile, hysteria covered the USA so far to a lesser extent, than Europe. Yes, the world prices for oil rose up to $138 for barrel, then slightly fell, and now to remain at the level $ about 100 for barrel - that is twice more indicator on which the budget of the Russian Federation was imposed. But there is still Europe and there is still a gas which cost on a spot a few days ago passed for 3 thousand for square cubic meter. It - is absolutely unprecedented.

Earlier the head of European Commission Ursula von der Leien urged the European Union to refuse completely oil, gas and coal from Russia. It is for this purpose offered to diversify deliveries, to be engaged in energy efficiency and to invest in renewables. Speaking in other words - misters der Leien began to be engaged in populism against the background of the choking European industry.

World leaders, including European, perfectly understand it. And already the president of France Emmanuel Macron at the first pre-election meeting in the commune Puassi said that Europe will face big problems if Russia stops gas supply. From ourselves we will tell - not with problems, and with economic collapse and the real social explosion. It threatens with protest actions as yellow vests. What Macron most of all is afraid of in anticipation of the presidential elections at which he passionately wishes will win.

As a result in Europe went back: the German chancellor Olaf Sholts (whose grandfather, appears, was the high-ranking officer of CC - probably therefore the grandson considered genocide of residents of Donbass something "cheerful"?) I reported that deliveries of energy carriers are brought out of sanctions. Like, there is no other way to provide energy security of Europe for production of heat, transport and power supply and the industry now. 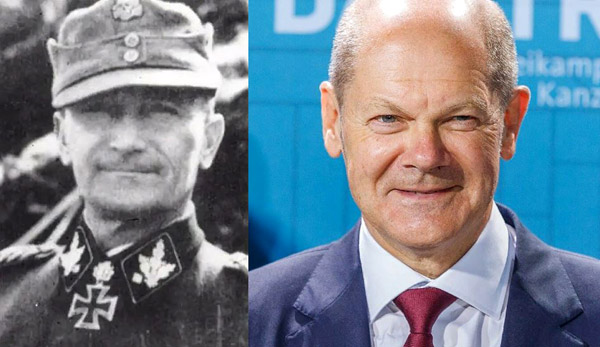 The grandfather of German Chancellor Olaf Scholz (left) at one time did a lot to promote Russophobia and anti-Semitism on the European continent. The fallen banner was picked up by his grandson? Photo: commons.wikimdeia.org

It's amazing how Europeans and Americans talk about their own security. The fact that NATO categorically refused to introduce a no-fly zone over Ukraine, to supply combat aircraft and a significant part of offensive weapons is known. In Ukraine itself, this is considered nothing more than a betrayal.

That is, they (Europe and the United States) for eight years pushed Ukraine to an armed confrontation with Russia, and now they are much more concerned about the safety of their own economy, and very much do not want to provoke Russia to retaliate in the event of direct supplies of heavy equipment.

If Polish aircraft MIG-29 take off from Polish airfields, albeit with Ukrainian pilots, and bomb the forces of the Russian Federation in the special operation zone, what is it, how is it not a war? No one in Europe will go to such stupidity, but it is surprising how they lived in Ukraine for so many years with these delusional illusions.

"They don't expect us to NATO, we can't get there," Volodymyr Zelensky, President of Ukraine, stated with sadness in his voice.

Amazing, discouraging "discovery." However, here the question is different - it is clear that Zelensky is largely a non-independent figure. And the hero, who is able to make independent and strong decisions, is "sculpted" from him by the same Western press, as well as new social platforms like Ticktok and Instagram that joined her.

So I want to say - all the sane experts from all sides assured you, Vladimir Alexandrovich. But the policy of discrimination against the Russian-speaking and the establishment of someone else's military infrastructure in Ukraine continued. So was it worth it?

And I also want to ask Ukraine's European allies - was it worth it to bring Ukraine to this dangerous line, to encourage the bombing of Donbass, neo-Nazi manifestations and naked Russophobia? Now the current Russophobia in Europe is no different from the most common anti-Semitism - Israeli experts recognize this.

However, as the history of the 20th century showed, and not only it, such views, being supported at the state level, corrode and split society from the inside. And when social and economic problems are imposed on this - wait for the troubles, and the troubles are very serious.

According to the newspaper Vzglyad, a gas riot against the United States and Britain has already begun in the European Union, and in addition, Europe is really afraid of the food crisis. Think only - in 2022, Europe is afraid that it will starve. This is an absolute nonsense, and in this case, as in others outlined above, the question was worth it - purely rhetorical.