American journalists again demonstrated the wonders of "objectivity," for which they were "sent" to the DPR.

The selectivity and bias of the Western press in covering issues related to Russia is known. But the beginning of a special military operation to protect Donbass and a wide conflict with the West exposed the new depths of the "professionalism" of our foreign colleagues.

About the next act of pressure on the Russian media and civil servants, the correspondent of The Moscow Post reports.

Yesterday at the opening St. Petersburg International Economic Forum, another provocation occurred during answers to questions from the special representative of the Russian Foreign Ministry Maria Zakharova. Journalists from the American television channel CNN, one of the most Russophobic (and influential) media in the world, distinguished themselves.

A CNN journalist asked a clearly provocative question about Donbass, to which Maria Zakharova invited him to talk with colleagues from the Donetsk People's Republic (DPR), who were also present at the forum. After that, the CNN journalist considered it appropriate to enter into a verbal skirmish with Zakharova.

The background of the situation is understandable. The forum was attended by representatives of the DPR, their delegation, journalists from Donetsk and Lugansk. But the United States and its allies of the Republic of Donbass do not recognize. Moreover, they do not consider our Donetsk colleagues to be journalists either - as they do not consider anyone who does not sing with them in chorus, voicing another "temnik."

Whatever the representatives of the DPR answer, CNN will pervert this, and in general they are unlikely to be allowed to show to the American audience. There can be no two points (or more) of view on the events taking place in the republics of Donbass and Ukraine in the United States. Otherwise, not far from recognition as a Russian spy.

What is worth only the recent case when the German TV channel accused the Russian army of barbaric shelling of Donetsk, although the artillery of the Armed Forces of Ukraine hit the city center. The situation was reported by Life.ru. The case is as outrageous as it is revealing.

It was to colleagues from the DPR that the CNN journalist was sent by Maria Zakharova.

However, a representative of the Western press suddenly said that the Americans, and even wider, Europeans allegedly have difficulties visiting the republics.

"I allow you to interview a representative of Donbass, who is your fellow journalist. Start with it. You will never be allowed to show this material. You know it better than me. And these materials will never appear on CNN, "said Maria Vladimirovna.

She wondered - what permission is needed to just talk with colleagues from the DPR, who are already present at the event? Yes, no - and the essence, again, is not this. The essence is absolutely divorced from reality, rabid propaganda, which is fed over and over again by the Western viewer.

And how can we not recall the actions of our former Western partners to completely ban any Russian and non-Russian media that give their word to all parties to the conflict and try to cover the situation objectively.

Even if we take cases of closing the editorial offices of the RT channel in Western countries, we can accept the point of view that they adhere to a conditionally pro-Russian position. But even if so - what is the problem in allowing them to work freely if no laws are violated?

Is this not a manifestation of pluralism of opinion, the embodiment of the principle of freedom of speech? But no - the Russian media is limited everywhere. And not only the media - the largest Western video hosting sites, social networks and other platforms do everything to squeeze out objectionable content that sheds light on Russia's position in the conflict with the West, makes it possible to express an uncomfortable point of view for the West to uncomfortable experts for it.

By the way, the closure of the RT editorial office in Germany at the behest of the German authorities took place on February 2, 2022 - that is, even before the start of the special operation. They simply could not "expose" it to it - as later social networks and video hosting in the West justified the restrictions by trying to reduce the influence of "Russian propaganda" about events in Ukraine.

The situation with lopsided coverage of the conflict in the Western press and complete disregard for the suffering of the inhabitants of the DPR and LPR reached such an absurdity that even Pope Francis was forced to say his word. He opposed the "black and white" coverage of the events:

"We have to move away from the normal Red Cap scheme: the Red Cap was good and the Wolf was bad. There is no metaphysical good and evil, in abstract form, " - Gazeta.ru quotes him as saying.

This is a very cautious call for objectivity - the Pontiff cannot help but notice how Western propagandists brainwash his flock.

And, in fact, it's a good signal. The truth will surely win - and along with the successes of the Russian military in the North Caucasus military zone, the truth will gradually break into the pages of the Western media.

But what is interesting - bias and pressure on journalists and civil servants is enough in Russia itself - from the same foreign agents of the liberal-oriented press. However, most of them have long settled in Europe. But Russian residents remain among the conditionally pro-Western "broadcasters."

For example, the former editor-in-chief of Echo of Moscow Alexei Venediktov (recognized as a foreign agent in the Russian Federation). Which, according to Ms. Zakharova, previously published photos of young Israelis with weapons in their hands on their social networks, singing their youth and courage.

Apparently, this is a hint that in the same way Venediktov (recognized as a foreign agent on the territory of the Russian Federation) for some reason the most ordinary guys and girls of Donbass, who were forced to take up arms to protect their home, are not sung. As they say, "this is different."

In response, Venediktov (recognized as a foreign agent on the territory of the Russian Federation) did not find anything better than to publish someone's legs with a hint that they belong to Zakharova - and even with a scabby comment. However, the official representative of the Ministry of Foreign Affairs immediately denied this affiliation in her telegram channel. 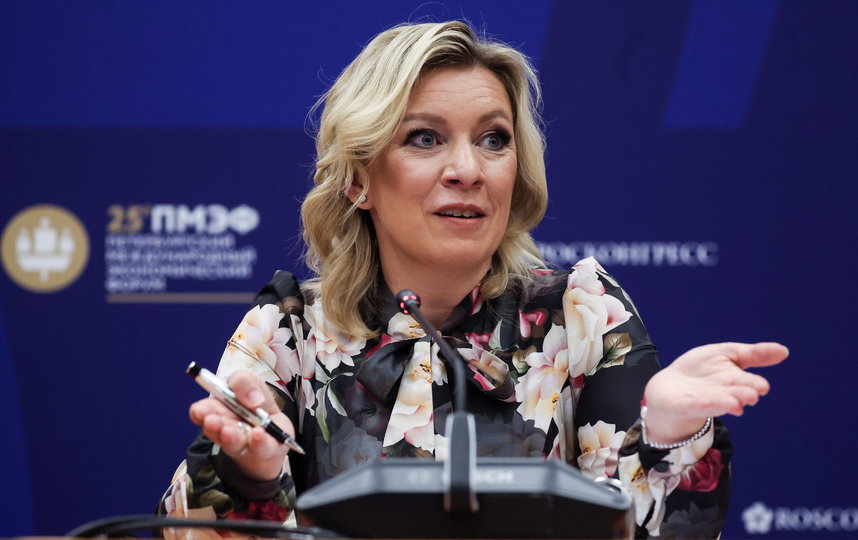 Maria Zakharova once again not only holds the blow of Western propagandists, but also answers them - tough, biting and on the case. Photo: news.ru

Of course, the scandal with a CNN journalist and the comments of Mr. Venediktov (recognized as a foreign agent on the territory of the Russian Federation) are only an episode in a series of constant pressure on our journalists and officials. But it reflects the essence of the situation. Therefore, Maria Vladimirovna can only be praised for her readiness to give a tough answer and even a sharp polemic.

After all, in the end, the CNN journalist calmly continued to work on the forum. Unlike the same RT journalists, who were simply "thrown out" of the United States.

So much for free speech.

30 December, 7:49
Maria Zakharova: the relations "as before" with the West won't be
See also