Three Days That Will Change Lives

Referendums on the entry of the DPR, LPR, Kherson and Zaporozhye regions into Russia took place. Now you need to count the votes and protect people from the anger of the former "Nenka," in fact - an evil stepmother.

Today is the fifth, last day of referendums in the Donetsk and Lugansk people's republics, as well as the Kherson and Zaporizhzhya regions. However, the central election commissions of these territories have already recognized the very procedure that took place. What's next - the correspondent of The Moscow Post understood.

According to the results of three days of voting, which began last Friday, the turnout in the DPR, LPR, Zaporozhye and Kherson regions exceeded 50% - such data are provided by local election commissions. And the DPR and LPR it is more than 75%. Voting will continue today, but the fact has come true, referendums have taken place.

Few doubt that most people voted to join Russia. Those who hesitated were greatly helped by Ukraine itself - constant shelling of residential areas, intimidation, terrorist acts and threats did their job. The higher the pressure and threats, the more active the residents of these territories went to the polling stations.

In addition, the procedure is monitored by about 130 international observers from 23 countries, including from unfriendly countries. Those who stated in advance that they did not recognize their results.

According to Alena Bulgakov, deputy chairman of the coordination council at the RF OP for public control over voting, a "certain ulcer" was revealed - there is an opinion of the French government, which refused to recognize referendums, but there is a real French citizen who oversees the referendum and speaks of its transparency and legitimacy.

Western politicians, with all their anger and hatred for Russia, live in a parallel reality. Two days ago, German Foreign Minister Annalena Berbock said that Russians allegedly shoot and rape everyone who does not want to participate in the referendum. And after all, they believe in such nonsense - despite the abundance of cameras at polling stations, the presence of international observers.

Berbok's words were denied by her compatriot, German journalist Alina Lipp, who is currently in Donetsk. She said that people go to polling stations, despite the barbaric shelling from the Armed Forces of Ukraine. She argues that Berbock's claim to force a vote is untrue.

However, the truth in the Western media about this vote, and in general about everything that is happening now in the already former Ukrainian territories, should not be expected. Despite the abundance of photos and videos, interviews with ordinary Kherson residents, Cossacks, residents of the LPR and DPR, all this texture does not fit into the image of what is happening there drawn by Western propaganda. Everything that does not correspond to the general line on inciting hatred against Russia will be noted immediately.

Now the vote is still underway, the votes are to be counted. According to all polls, it can be assumed that people said a confident "yes" to joining the Russian Federation. The Russian authorities, represented by the press secretary of the President of Russia Dmitry Peskov and other officials, have already made it clear that in this case our country will quickly take all the necessary decisions to include these territories in the Russian Federation - return to a large Russian family.

Due to the constant military threat, the vote was as decentralized as possible. People not only could come to the plots, there were rounds of people and houses. In addition, many residents of the Kherson region and Zaporozhye were forced to leave for Russia, fleeing adversity and the Kyiv terror - plots for them opened on the territory of the Russian Federation.

However, the question remains - what next? How will the lives of people in these territories change, because a special military operation continues. Kyiv does not abandon attempts to return by force territories that did not want anything to do with the Nazi regime.

It is significant what happened in the Kharkiv region after the regrouping and withdrawal of part of the Russian forces over the Oskol River. The Nazis launched a real terror in Raisins and Balakley against their own citizens, looking for collaborators among them. However, it is possible not to be one - it is enough to be neutral or simply not to hate your neighbors from Russia.

People are grabbed, tortured, taken hostage, mocked. After such an "advertisement," there can be no question of any return to Ukraine for the same Zaporozhye and Kherson region.

The entry of these territories into the Russian Federation may change the nature of the military operation taking place there. It can turn into a counter-terrorist operation (CTO) already on Russian soil, because in the event of a positive outcome, the regions will already be Russia.

This was stated by the head of Crimea Sergei Aksenov. Whose son, by the way, as part of the announced partial mobilization was drafted and will go to the troops. By the way, mobilization measures in Crimea have been completed. Aksenov also stressed that referendums on joining Russia are a "point of no return." There can be no rollback, Russia will defend its land. 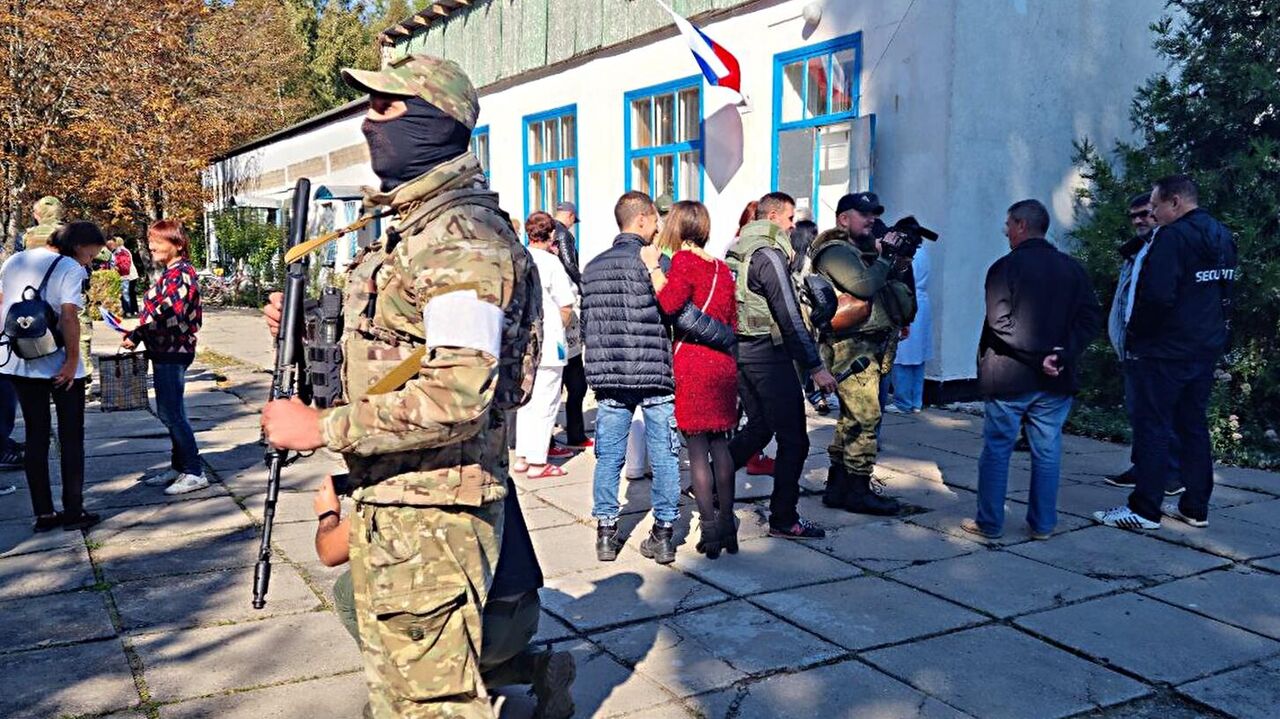 People vote under the protection of the Russian military, despite threats and barbaric shelling from the Armed Forces of Ukraine. Photo: http://ria.ru

In Kyiv, all this is a real hysteria. President Zelensky, with a consciousness clearly clouded with prohibited substances, never ceases to carry evil nonsense, clearly replaying, even being a good actor. He also said that after referendums, there could be no question of any negotiations with Russia. Apparently, he is waiting for several more regions to "fall off" from Ukraine.

Zelensky turned to the Russian mobilized in Russian, said that they would not wait for mercy. But after the fact that Ukrainian militants worked on the territory of the Kharkiv region, the LPR and the DPR, his words do not matter. Russia will defend itself with all possible forces and means.

In addition, after the inclusion of the DPR, LPR, Zaporozhye and Kherson regions in the Russian Federation, these forces and means will be significantly strengthened. This will already be the Russian territory on which Russian laws apply. And ill-wishers will have to reckon with this - up to fear of a nuclear strike, which the Russian Federation has every right to inflict in the event of a threat of destruction of the state. That is, exactly what the Western partners of Kyiv are so zealously seeking. So far, they manage to destroy only Ukraine.