"There is no swan on them": Russia is provoked to act tougher

Around the perimeter of Russia, provocations continue - attempts to once again "set fire" to Transnistria and Transcaucasia.

Against the background of the unfolding second phase of a special military operation to protect Donbass, Russia's "well-wishers" continue to probe our country. As the correspondent of The Moscow Post reports, on the eve of a grenade launcher fired at the building of the Ministry of State Security of Transnistria - no one allowed themselves such impudence for about 30 years.

The department itself is in no hurry to comment on the reasons for what happened and point out the perpetrators. However, with a high probability this is another provocation of agonizing Ukraine, the purpose of which may be the desire to sow panic or provoke the Transnistrian authorities to rash actions.

While our troops, together with the forces of the LPR and DPR, smash the Armed Forces of Ukraine, one after another liberating settlements in the Donbass, a serious group of the Armed Forces of Ukraine remains in the Odessa region. In the Ukrainian media, calls were repeatedly made for a joint military operation of Ukraine, Moldova and Romania to clean up Transnistria in order to create problems for the Russian command.

The fact is that in the unrecognized Transnistrian Republic there is an operational group of Russian troops - the heiress of the 14th Guards Combined Arms Army of the USSR. In addition to the peacekeeping mission, our military is engaged there, mainly in the protection of numerous ammunition depots of the Soviet era.

A possible military provocation in Transnistria with an attack from two sides - Ukrainian and Moldavian, could solve several problems of our ill-wishers at once. On the one hand, Moldova, led by a Romanian citizen, would finally "close" the Transnistrian issue. On the other hand, Ukraine would secure its Odessa group from the west and receive large warehouses with ammunition - which the Armed Forces of Ukraine so badly need.

At one time, the Task Force (then still the 14th Guards Army) was led by the notorious and now deceased General Alexander Lebed. A person, as beloved in the troops, is so tough. It is unlikely that he would become almond in the event of an attack on the building of the state security of the republic.

Everyone remembers his common phrase: "enough to walk around the world with an outstretched hand, like a goat for a carrot." It was said in Transnistria. But not everyone remembers its full version:

"As for the power that I have the honor to represent here, I can also add that stop walking around the world with suma. Like goats behind carrots. Enough. It's time to get down to business, the power of honor. "

The power of honor seems to have begun. What is another way to call the fact that Russia has ceased to tolerate the humiliation and destruction of its own people in Donbass? But we are in no hurry to click on the nose of the provocateurs, as Swan could do. Otherwise, somewhere in the area of ​ ​ the Moldavian and Romanian borders, a couple of flying "calibers" would have been noticed long ago.

Meanwhile, delay in this matter may really give Ukraine a reason to think that its sabotage actions in the PMR will remain unanswered. No swan on them?

Who "sets fire" to Transcaucasia

It should be noted that the provocation in the PMR is not the only test of Russia for strength in the current conditions. "Kindness" from London, Washington and Brussels dream of "setting fire" to the Transcaucasus, unleashing a new bloodshed in the barely calmed Nagorno-Karabakh. And Turkey, a NATO member led by Recep Tayyip Erdogan, is asleep and sees a continuation of hostilities.

Azerbaijan, which is in the orbit of influence of the Turkish Republic, fully supports such pressure on Armenia. Apparently, the temptation to bite the "Russian bear" is too great while he turned in the other direction and scattered the jackals in the direction.

After all, a violation of the status quo, to which provocations on the demarcation line methodically lead, will be a blow directly to Russia. And the head of Azerbaijan Ilham Aliyev, for all his external warmth towards the Russian Federation (after all, he studied at MGIMO, speaks Russian much better than Nikol Pashinyan) cannot but understand this.

It's just that Aliyev, like Erdogan, shares the national interests of their countries. And Aliyev, apparently, was not clearly explained enough that the first national interest of his state is good relations with Russia.

On the eve there was a new escalation in rhetoric. Aliyev stated that Baku will sign a peace treaty with Armenia only if it fully recognizes the absence of territorial claims to Azerbaijan. This was reported by RBC. Like, this is almost the last chance for Armenia. And this is not even half a day, but almost a clear threat.

Earlier, Yerevan proposed to fix the rights of Armenians living in Nagorno-Karabakh. Yes, in general, Armenian society is unlikely to come to terms with such a formulation of the question. Meanwhile, Nikol Pashinyan continues to reap the benefits of his orientation towards the West. Recall that he came to power on the wave of the velvet revolution of 2018. However, in the situation of the outbreak of the Karabakh war, he had no one to rely on except Russia.

Recall that in November 2020, after a 44-day conflict in the region, Azerbaijan and Armenia, with the mediation of Russia, signed a ceasefire agreement. It provided, among other things, the deployment of a peacekeeping mission along the contact line with the participation of almost 2 thousand Russian military for five years with the possibility of extending and unblocking all economic and transport ties in Nagorno-Karabakh.

The city of Shusha, Kelbajar, Agdam and Lachin regions came under the control of Azerbaijan. In November 2020, Russia sent its peacekeepers to the region. However, the final peace treaty between Armenia and Azerbaijan was not signed. This means that the current state of affairs in the same Azerbaijan is perceived only as a respite. Armenia is not ready to agree to conditions that its own population considers not to fully reflect the interests of the Armenian people.

And it is Russia that is the very balance factor that does not allow the situation to slide into a new acute phase. Alarming were reports a few weeks ago, when a group of Azerbaijani military entered the territory subordinate to Russian peacekeepers. But then the situation managed to cool down.

Now, it turns out, Russia is forced to send additional diplomatic efforts to calm Aliyev and his great Turkish friend? On the other hand, in the conditions of the most severe international pressure of the Russian Federation, in no case should the support of Armenia and its people be lost. 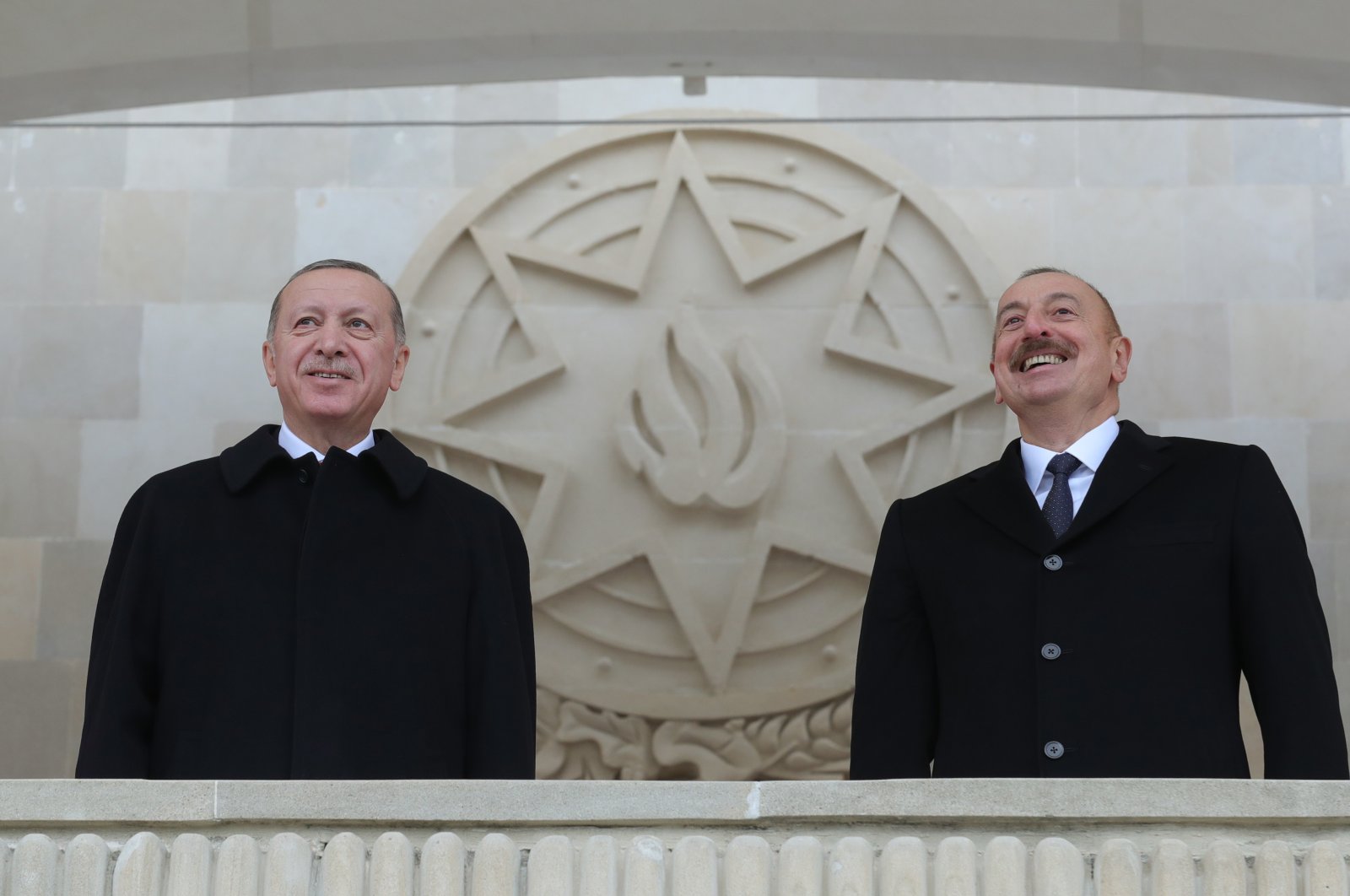 Recep Tayyip Erdogan and Ilham Aliyev continue to test Russia for strength in Karabakh while it is busy with the military-military complex in Donbass? Photo: dailysabah.com

This is another "stretch" for Russia against the background of the SVO to protect Donbass. Similar negative signals come from Azerbaijan and in other planes. In particular, yesterday representatives of the largest state oil company of Azerbaijan SOCAR made a statement that their structure does not pay for the supply of natural gas to the country from Russia in rubles. Although earlier Baku's consent to pay rubles was announced in the Russian media.

What is this - inconsistency of actions? Meanwhile, Aliyev continues to feel the support of Turkey. The one that, being a NATO member, calls our tourists to its beaches with one hand, and transmits Bayraktar attack drones to the Ukrainian side with the other.

And, it seems, Aliyev really liked the role of "land collector." Wants to repeat success. But will Russia remain neutral, as it was in 2020? It seems that the Russian leadership is simply forced to act harder.

The Russian Federation has to balance between these interests, somewhere showing strength, somewhere restraint, but ensuring the main thing - maintaining relative stability in other areas not related to Ukraine.

But none of these provocations can go unanswered, because the notorious "Overton Window" will force us to act in any case - only from much less advantageous positions.

Photo: Ministry of Internal Affairs of the PMR