There is no more City upon a Hill

Events in the United States put an end to the myths about the "light of democracy" and once again make you think about what fate America is preparing for the entire "unfree" world.

As the correspondent of The Moscow Post reports, the day before of the current President of the United States Donald Trump has made history again - he became the first American president to be impeached twice. 232 members of the House of Representatives voted for this step. Against 197. And there were 10 Republicans among those who voted "yes" - this is twice as many as Democrats who voted for the impeachment of their fellow party member Bill Clinton in 1998.

It is a lesson to the world how the modern American political system is transformed from a City upon a Hill to a monstrous Leviathan that instantly grinds down anyone who poses a threat. This is important for Russia in order to understand the internal processes in the United States and their political culture, so as to further build a dialogue on solving world problems.

The events of the past few weeks should have a sobering effect on those who represented or believed in the United States as a light of democracy and human rights as well as a role model. In fact, the American political system is rigid, largely archaic and monopolized by a system of political clans and military-industrial circles.

Of course, impeachment must be supported by the Senate. The Democrats will have problems with this - no one believes that Trump will be removed a couple of days before Biden's inauguration, even with the current "democratic consensus". Which, actually, does not exist. Despite the severity of the charges. And here we come to the well-known expression from ancient times: "What is allowed to Jupiter is not allowed to the bull."

American society is deeply divided. According to experts, up to 40% of residents of the States do not trust the results of the last presidential election, the victory in which, with a squeak and numerous violations, was "written" on Joseph Biden. Trump was accused of instigation, which is understood to mean the seizure of the Capitol by Trump supporters on January 6. The events of those days themselves are out of the ordinary.

What is allowed to Jupiter

Many compare what happened to the events in Ukraine in 2013-2014, when the crowd, warmed up by media reports and not trusting President Yanukovych, went on an armed assault on administrative buildings. The parallels are both appropriate and not.

The difference here is that in the United States, unlike in Ukraine, no one really incited people, pushed them to the barricades, or called for violence. Despite all the accusations, there was no coordinating centre, and the people were not armed - it was a spontaneous expression of popular discontent. Or did someone see Melania Trump handing out cookies to protesters?

But then, in 2014, the entire world community, led by the United States, encouraged the citizens of Ukraine to stand up. They were the "holy" figures of the Maidan, fighting against the injustice of the authorities for people's freedom.

In the United States, supporters of Trump who broke into the Capitol are called nothing but terrorists. The bacchanalia generated by this event is terrifying. There is a police officer among the five killed in the assault. He is the only person worthy of memory, according to the current owners of the Congress.

The other four - ordinary people, including a US Army veteran - got what they deserved, they do not remember them. Nor do they recall that one of them was shot seven times in the back. What public danger could he pose? 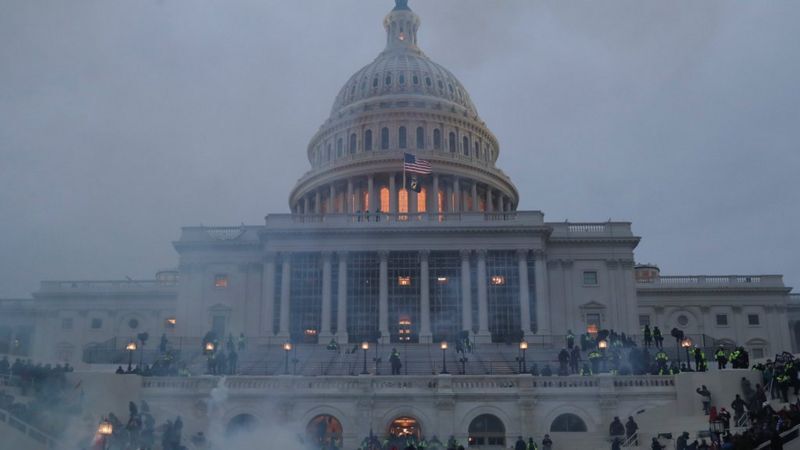 The photo of the almost taken Capitol will forever enter the world history textbooks. The main thing for Russia is to draw conclusions.

A real witch hunt has begun. Trump and all his sympathizers are accused of almost an attempted coup, an insurrection. Those protesters who managed to escape from the Capitol are searched for, posting their photos at public transport stops. A real Wild West, you would say?

The story of a young girl, a supporter of the Black Lives Matter movement and the general democratic public received a wide public response. She posted photos of her own parents from the Capitol calling for their immediate arrest. This is her revenge for the fact that her relatives were against her participation in the BLM riots. These riots themselves were called protest actions in the American press, a struggle for freedom. Shooting BLM rioters, unlike those protesting under the Capitol, was strictly prohibited.

Where American land ends, American laws no longer apply. What is allowed to Jupiter is not allowed to the bull. And now a harmonious chorus of voices, including the voice of "conscious" residents of Ukraine, supported the harsh reaction of the authorities to Trump's supporters.

The 45th president himself was generally deprived of the opportunity to convey his position. Facebook, Twitter, Instagram, and other social media platforms were banned for Trump by the big corporations that run social media, forgetting all the chatter about liberty of speech. Together with them, millions of Americans lost the opportunity to get an alternative view of events.

Is it necessary to remind what a wild howl rises in the Western press when a particular account is blocked in the Russian Federation for calls to terrorism, insults and other violations of the law? In this case, the Americans do not see any contradictions.

As George W. Bush said about the protests at the Capitol: "It's a sickening and heartbraking sight. This is how election results are disputed in banana republics - not in our democratic republic." His words are quoted by RBC. And we can not disagree with him, but in what way - so it is.

They really consider Venezuela, Ukraine, Georgia, Belarus and other countries to be the real banana republics. Where the overthrow of legitimate authorities in favour of American interests is the right thing to do. In the United States itself, any hint of this is an excuse to put half a clip in one’s back.

What can be said, the roller of repression is so great that social networks like Twitter and Facebook were not afraid to lose tens of billions of dollars of capitalization, fulfilling the will of the dominant part of the political establishment of the US. Moreover, even long-time singers and "praisers" of American "democracy" were under pressure.

What is worth one well-known political emigrant alone, in the past - an assistant to Vladimir Putin, economist Andrey Illarionov. For many years, he dispersed propaganda against our country and its top leadership, criticizing everything and everyone, giving the example of the United States as a shining City upon a Hill and a role model.

So what? One critical publication about the events at the Capitol and he is no longer a fellow of the American Cato Institute. This is reported by Novaya Gazeta. Expelled? Quickly. Well, what did he want - like "democracy", get a democratic "ban".

For Russia, this is a huge reason to think and set priorities. The opportunity to understand that the line of independent policy, including in the development of democratic institutions and the protection of human rights, is not a whim or an attempt to invent a bicycle, but an urgent need and demand of the time. 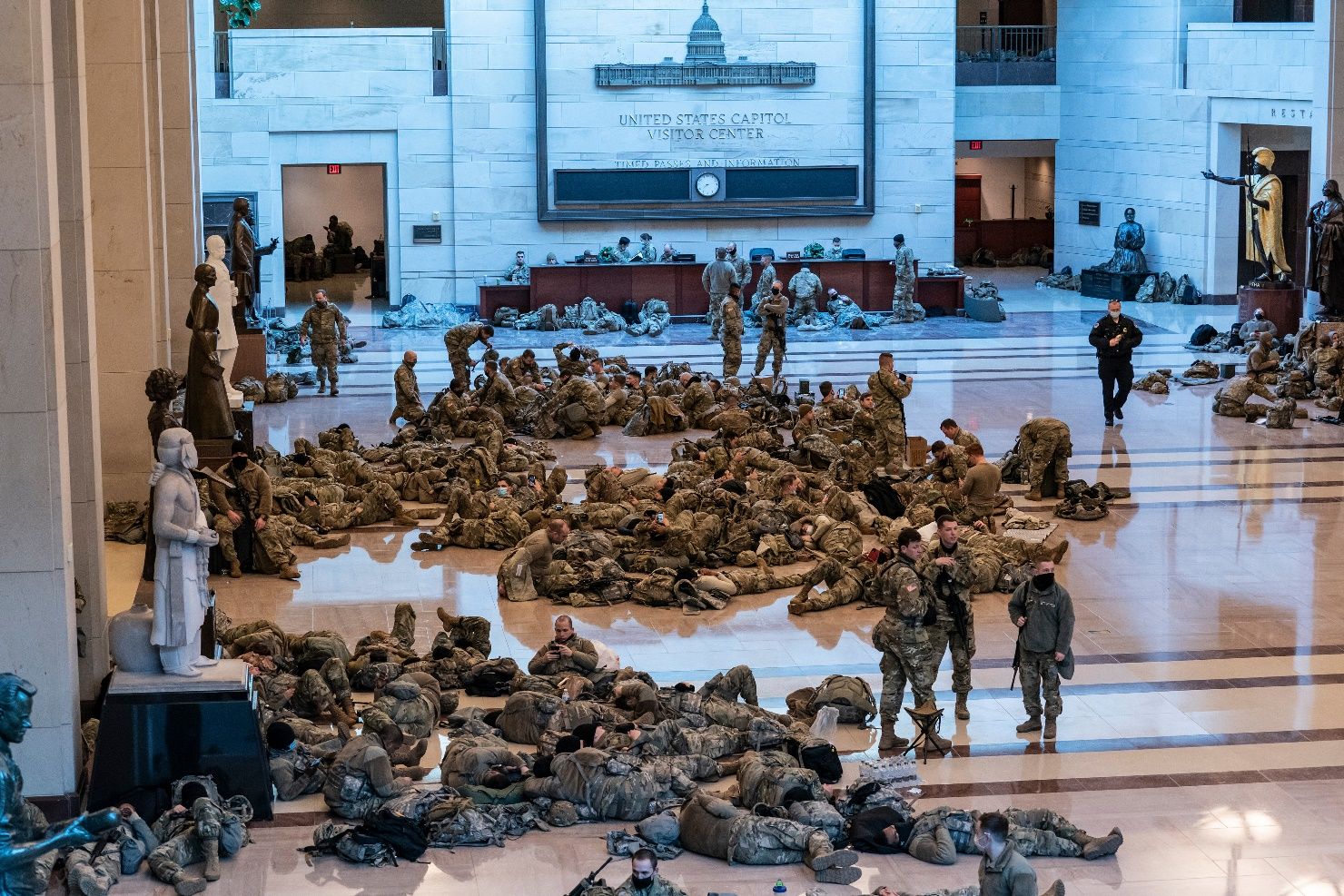 For millions of people fooled by American democracy, including through the democratic opposition, this is an occasion to reflect on the deep hypocrisy and prosaic motives that underlie the actions of those who have been given as an example for decades. And a model of the future for our country - with almost totalitarian bans, witch hunts, intolerance and a willingness to use force against peaceful demonstrators, and then teach the whole world. Do we need it?