Terror as an argument: what did the Ukrainian regime reach under Zelensky

Unable to inflict a fire defeat on Russia, Ukraine is moving to methods that are more suited to radical groups from the Middle East. And with the same zero result.

The Governor of the Belgorod Region Vyacheslav Gladkov announced the shelling of the village of Golovchino from the Ukrainian border, RIA Novosti reported. They are trying to recoup the defeat of their group in Mariupol with such low-level and absolutely senseless actions of the Armed Forces of Ukraine from a military point of view.

Such methods will not be called military by the language, because there were no military in the village. There is destruction, information about the victims is being specified. Clearly, this is pure water terrorism, when people just wanted to be intimidated. It seems that Ukraine has no other methods of influencing the population of Russia supporting the special operation to protect Donbass.

Ukraine by its actions increasingly resembles a "terrorist" state. The sensational video, where a young Lviv woman on camera "cuts" the head of an allegedly Russian "prisoner of war," was seen by many. It shocked even in the West, because the parallels with ISIS (a terrorist organization banned in Russia) are obvious.

However, in terrorist methods, Kyiv went much further - it began to take hostages. And the spirit of the same Middle Eastern extremist organizations is trying to exchange them for their accomplices, who have already found themselves in the hands of the military of the Russian Federation or the LPR.

The most striking episode of such tactics was the seizure by official Kyiv of Viktor Medvedchuk, a well-known Ukrainian politician, previously the head of the second largest opposition party in parliament, the Opposition Platform for Life. Today, the party itself is banned in Ukraine, many of Medvedchuk's associates left Ukraine, others were killed or in prison. Others ended up in the hands of the SBU.

All the "fault" of Mr. Medvedchuk is that he is rumored to be the "kum" of Russian President Vladimir Putin.

Medvedchuk himself did a lot for Ukraine. During the pandemic, Viktor Medvedchuk tried to arrange the supply of the Russian Sputnik V vaccine to Ukraine, or get a license to produce the drug on the spot. As you might guess, the nationalist, openly pro-fascist regime in Ukraine did not go for this, and a case of high treason was opened against Medvedchuk himself. 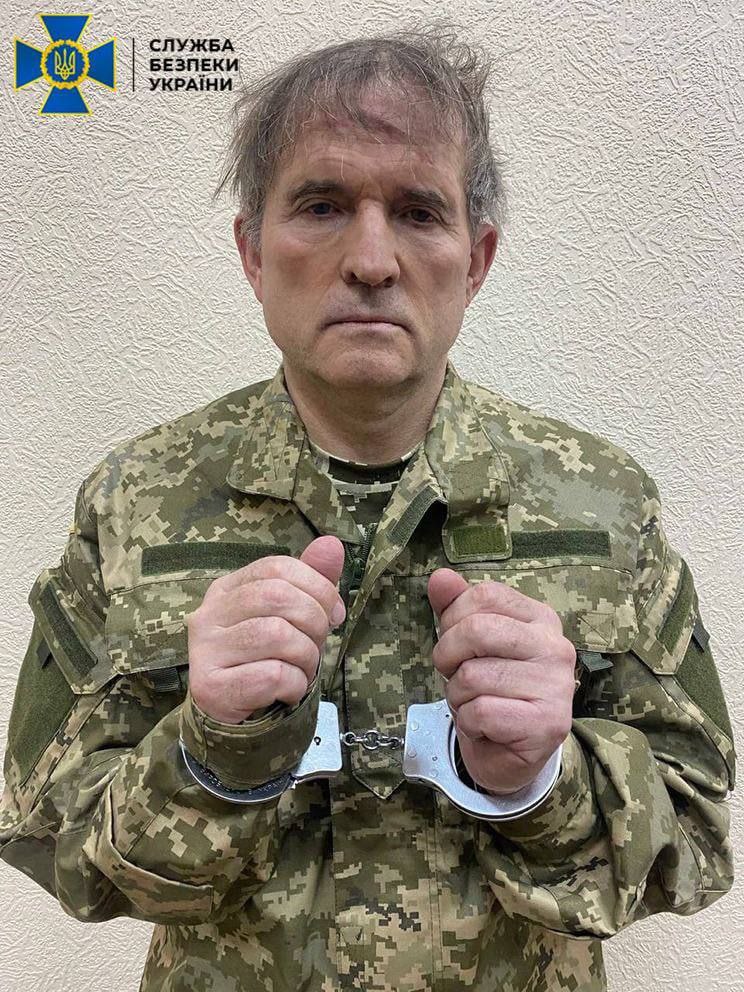 A similar case was opened against the former President of Ukraine Petro Poroshenko. Only if the latter really stole the country (which is worth only high-profile embezzlement at the Lenin Forge defense plant belonging to him), then the pressure on Medvedchuk was exclusively political in nature.

President of Ukraine Zelensky simply cleaned the electoral field to stay in power. The start of a special military operation made adjustments.

As a number of Ukrainian sources reported in the early days of the operation, Viktor Medvedchuk allegedly escaped from house arrest at his home in Kyiv. And only recently, "reappeared" on the frames of the SBU video shooting - beaten, exhausted. His appearance was filed as an information victory: it was necessary to somehow block the negative from the surrender of over 1 thousand marines of the Armed Forces of Ukraine from the 36th brigade. And then Medvedchuk suddenly "gets," and now the Ukrainian society, distraught in anti-Russian hysteria, rejoices and claps - Putin's kum was caught!

In fact, most likely Medvedchuk did not run anywhere, but was captured by the SBU and placed in the basement, where he was probably tortured. Thus, in a simple way, President of Ukraine Volodymyr Zelenskyy received a hostage to put pressure on the Russian leader.

They thought to exchange it already in the first days for Ukrainian prisoners of war. The appeal was recorded by Zelensky himself. Then the press secretary of President Putin Dmitry Peskov had to answer. He explained the obvious things - Medvedchuk is a Ukrainian, not a Russian citizen. He is a politician, not a prisoner of war. So what kind of exchange of prisoners can we talk about? RIA Novosti wrote about this.

In general, the media worked, but in essence this card did not play. And it would have been postponed if it were not for the remnants of the Mariupol garrison that settled at the Azovstal plant. This is the last line of defense, a stronghold of 2-3 thousand people, whom, in fact, abandoned their command. Among them are the Armed Forces of Ukraine, and the neo-Nazi regiment "Azov" (an extremist and terrorist organization, banned in Russia).

And so Zelensky again, like a terrorist refueling, takes out his only "trump card" from his sleeve - Medvedchuk, exhausted in the basements of the SBU. He reads the text written for him on a piece of paper, where he asks to exchange him for the defenders of Mariupol.

And then other players connect. In particular, the United Kingdom. It turned out that in recent days several British mercenaries have been captured by the Russian Armed Forces - Sean Pinner and Efden Aslin. They synchronously recorded an appeal with a request to exchange them for Mr. Medvedchuk. Their words are quoted by Izvestia.

Further, the militants who settled on Azovstal cast a voice. They claim there are women and children in the basements next to them. And that you need to immediately exchange them for Medvedchuk. There is simply no limit to cynicism!

First, few people believe that there are indeed women and children in the basements of Azovstal. This is not a residential development. If so, this is the largest act of hostage-taking in modern history. And the reason is simple - Ukrainian militants do not want to die alone, and use the notorious tactics of human shields. Is this not terrorism? 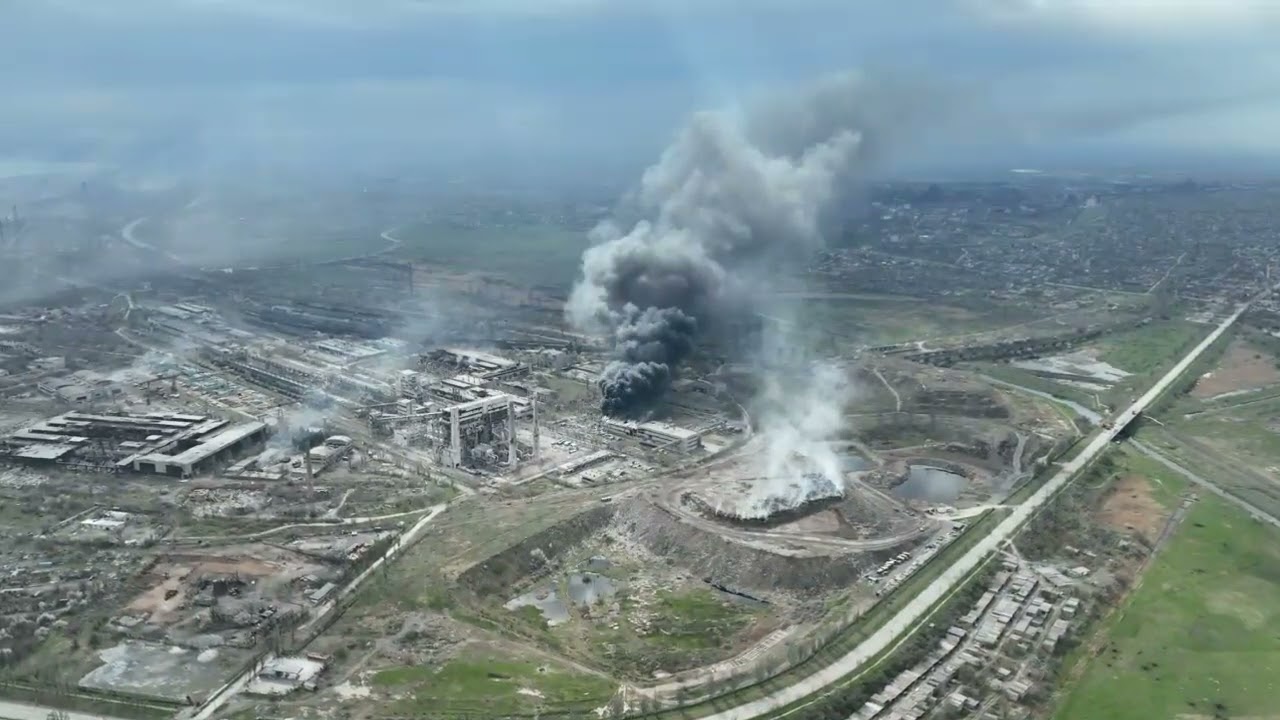 The Azovstal plant in Mariupol, where Ukrainian militants settled. They can hold hostages, and there can be several hundred mercenaries from all over the earth. Is it that Zelensky and Johnson are trying to "save" them? Photo: Discovery sources

Even pro-Ukrainian telegram channels were in bewilderment. "Why didn't they talk about this earlier and let them out along the evacuation corridor?..." Azov "(an extremist and terrorist organization banned in the Russian Federation) did not really want to release civilians, realizing that they were their guarantee of preserving life.

Who is hostage to whom

And then another interesting political and diplomatic track is included: the wife of Viktor Medvedchuk, Oksana Marchenko. Marchenko is a famous woman in Ukraine, TV presenter, political and public figure. When the SVO began, fearing for her safety, she moved to Russia.

And on April 16, Marchenko appealed to the President of the Russian Federation with a request for help in the release of her husband. Allegedly, Medvedchuk agreed to the exchange, which was later confirmed in a video with his participation. Prior to that, Marchenko had already recorded a request for help to Turkish President Recep Tayyip Erdogan, as well as to the Crown Prince of Saudi Arabia Mohammed ibn Salman Al Saud to assist in the exchange of British prisoners for her husband.

To put aside the lyrics and the real fates of the people behind this story, what do we see? We see a subtle political game in which President Zelensky and his associates themselves become hostages of the Medvedchuk case.

The Russian authorities in the person of Peskov have already made it clear - what kind of exchange can we talk about? Ukrainian citizen on Ukrainian prisoners of war? And there can be no discounts on any personal relationship between Putin and Medvedchuk - no one will change it for thousands of prisoners of war.

Thus, trying to use the tactics of terrorists, Volodymyr Zelenskyy himself became a hostage to his own stupidity. In addition, initially there were fears that Zelensky could simply kill Medvedchuk. And now Zelensky will have to keep him alive. According to the authors of the telegram channel "Chronicles of the Apocalypse," the "sudden" death of Medvedchuk against the background of statements already made allegedly can seriously stir up Western society and greatly reduce support for Ukraine. They can no longer allow this in Kyiv. 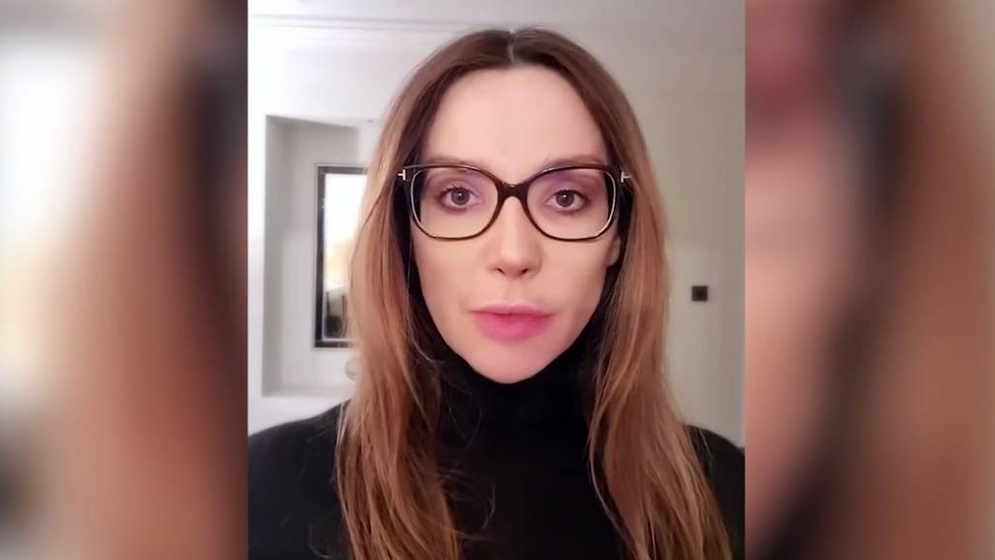 Viktor Medvedchuk's wife Oksana Marchenko will be a real headache for the Ukrainian regime, breaking down the picture of its democracy and respect for human rights. Photo: Discovery sources

And given that the British embassy is already connected to the situation, Zelensky will have to blow dust particles from Medvedchuk - and especially against the background of Moscow's refusal to change him to Ukrainian prisoners of war.

This is such a simple gambit from Ukrainian terrorists, which already at the initial stage turned against themselves. And Ms. Marchenko will regularly play the role of the Decembrist's wife, knocking on all doors and instances, drawing the attention of the world community to the fate of her husband.

Given that Western media are already getting tired of the pro-Ukrainian position, all this will spread the truth about what the Ukrainian regime really is - in fact, a nuclear mixture of compliance with neo-Nazism and terrorist methods of doing business.