Terror as a NATO tool

NATO's actions have led to a colossal spike in terrorism around the world, especially in the Middle East, but they themselves are looking elsewhere for "terrorists."

The NATO Parliamentary Assembly, following a meeting of the organization in Madrid, called on the countries of the North Atlantic Alliance to recognize Russia as a "terrorist regime." Moreover, members of the Alliance are going to create an International Tribunal, in which they want to consider the facts of "Russian aggression" in Ukraine in order to bring Russia to justice.

Why this statement from the mouth of NATO members looks crazy, crossing all boundaries and frames - in the material of the correspondent of The Moscow Post.

The demonization of Russia continues - in all possible formats and institutions in the West. Could not stay away from the promotion of this "case" and NATO. And, as in the case of the cry "hold the thief," in the Alliance's attempts to label the "terrorist state" on the Russian Federation, terrorist tendencies are clearly traced.

Last week, a group of war criminals of the Armed Forces of Ukraine in the SVO zone committed a monstrous crime - they shot Russian soldiers who had surrendered at point blank range. This is a clear war crime, but this can also be considered a terrorist attack, because the ultimate goal of this operation was an attempt to intimidate Russian society as much as possible.

NATO did not have any condemnations, outbursts of emotions, demands to investigate the incident. Even today, when Ukraine continues to shell the Zaporizhzhya nuclear power plant, it is well aware that this is nuclear terrorism and how it can end. And again - not a sound.

Prior to that, the position of European officials on the explosions on the Nord Stream-2 pipeline became known. Later, God knows how long, the Swedish submariners confirmed - it was the explosion that occurred on the "branches," the remains of an explosive were found. I.e. this is precisely sabotage, a terrorist attack aimed at destroying the European gas transmission infrastructure.

As Serbian President Aleksandar Vucic said, in Europe, and everywhere everyone understands perfectly well who did it, in whose interests it was. But, fearing for the safety of their own states, European residents do not open their mouths. On the contrary, they point their fingers at Russia.

This is exactly the same terrorism approved at the state level. The pipelines blew up Britain and the United States - key NATO countries. But they are in no hurry to recognize themselves as terrorists, they believe that they acted in their national interests. Apparently, sabotage and terror have long become a familiar tool for achieving their political goals.

And can the bombing of schools, hospitals, other social infrastructure be considered terrorism - moreover, in those cities and countries that simply do not have air defense systems cannot answer? Is it possible to disagree with the thesis that the multi-day, multi-week bombing of Belgrade and other Serbian cities in the 90s was not an act of state terrorism?

The task was one thing - to inflict maximum damage and sow fear, panic in order to persuade the Serb leadership to make unprofitable political decisions. And it was possible to do it. And after that there was a breakaway of Kosovo, where the real terrorists, led by organ dealer Hashim Thaci, nicknamed "Serpent," became the leader of pseudo-education.

But it was THEIR Serpent, their terrorist. Them, if you like, "son of a bitch." And now tension is growing on the administrative border of Serbia and Kosovo: Kosovo terrorists have decided that enough time has passed to deal with the Serbs living in autonomy, or at least take away the remnants of civil rights from them.

In Russia, even young people know, and who remember the older ones themselves, how NATO countries reacted, more broadly - the West to the separatist crisis in Chechnya. The republic was flooded with many terrorists, including from Arab countries, money flowed from Europe, Turkey, the Middle and Middle East. Those fighters of the Alliance member countries were called nothing more than "rebels." And after the terrorist attack in Budennovsk, and even after the tragedy of Beslan.

But in 2014, the same states instantly recorded people who rebelled against the Kyiv regime in Donbass as terrorists - they intercepted the rhetoric of their Ukrainian wards.

Eight years later, these same wards blow up bridges, mine roads, stage terrorist attacks on the liberated territory, kill officials and activists, and ordinary people, as was the case in Bucha and Kupyansk. What can we say, the tentacles of the Ukrainian terror even reached the Moscow region, where the daughter of the philosopher Alexander Dugin Daria died as a result of the terrorist attack.

In all this, the member countries of the Alliance do not see terrorism. After all, if you consider that they sponsor the Kyiv regime, supply money, weapons, people there, you will have to recognize yourself as sponsors of terrorism. But in the inverted world of Western democracy, the opposite is happening - Russia, which has been fighting terror for over 25 years, is trying to present itself as a terrorist state.

And now the Sejm of Lithuania - not very important, but very faithful dog walker NATO, decided to recognize Russia as a country supporting terrorism. But it is in the Baltic countries that Russian terrorists and extremists are drawn, who are given shelter and funding there. In the same Estonia managed to "beg" the killer of Daria Dugina from the FSB - and there is no doubt that in that country they knew perfectly well who they were hosting.

On a global scale, this monstrous, bloody hypocrisy has already resulted in a whole series of crises. The wave raised by the United States and NATO in the Middle East, called the "Arab Spring," led to monstrous consequences, a surge in terrorism around the world, the creation of the "Islamic State" (extremist, terrorist organization, banned in the Russian Federation).

But even the fight against it turned into a farce: not wanting to support the legitimate authorities of the same Syria, the United States and NATO relied on democratic opposition. In fact, the same terrorists who tried to use as a tool both against ISIS (a terrorist and extremist organization, banned in Russia) and against the leadership of the Syrian Arab Republic.

Who helped to cope with this misfortune? Russia and its military. When the Russian Federation entered the confrontation, the militants stood near Damascus. And today they hide down the holes, periodically receiving financial and weapons feed from "fighters against terrorists" from the West.

Not to mention even more dramatic events: the wars in Afghanistan and Iraq, ending so shamefully for the Western coalition. In one Iraq, which was bombed for 40 days before the ground operation began, a million people died as a result. For the most part - absolutely ordinary people. And while fleeing Afghanistan as a final "gift" to locals, American special forces "mistakenly" killed an innocent family of ten, including children.

No one was punished for this, no sanctions were imposed. But combining all these facts together, (let's not forget the US funding of Afghan mujahideen during the presence of the USSR there, and many other points), it turns out that it is NATO countries that have long been using terror as a means of achieving political goals.

Or they look quite approvingly at acts of state terror from countries such as Israel, which does not hesitate to kill Iranian officials and scientists where it can reach them. National security interests, you see. 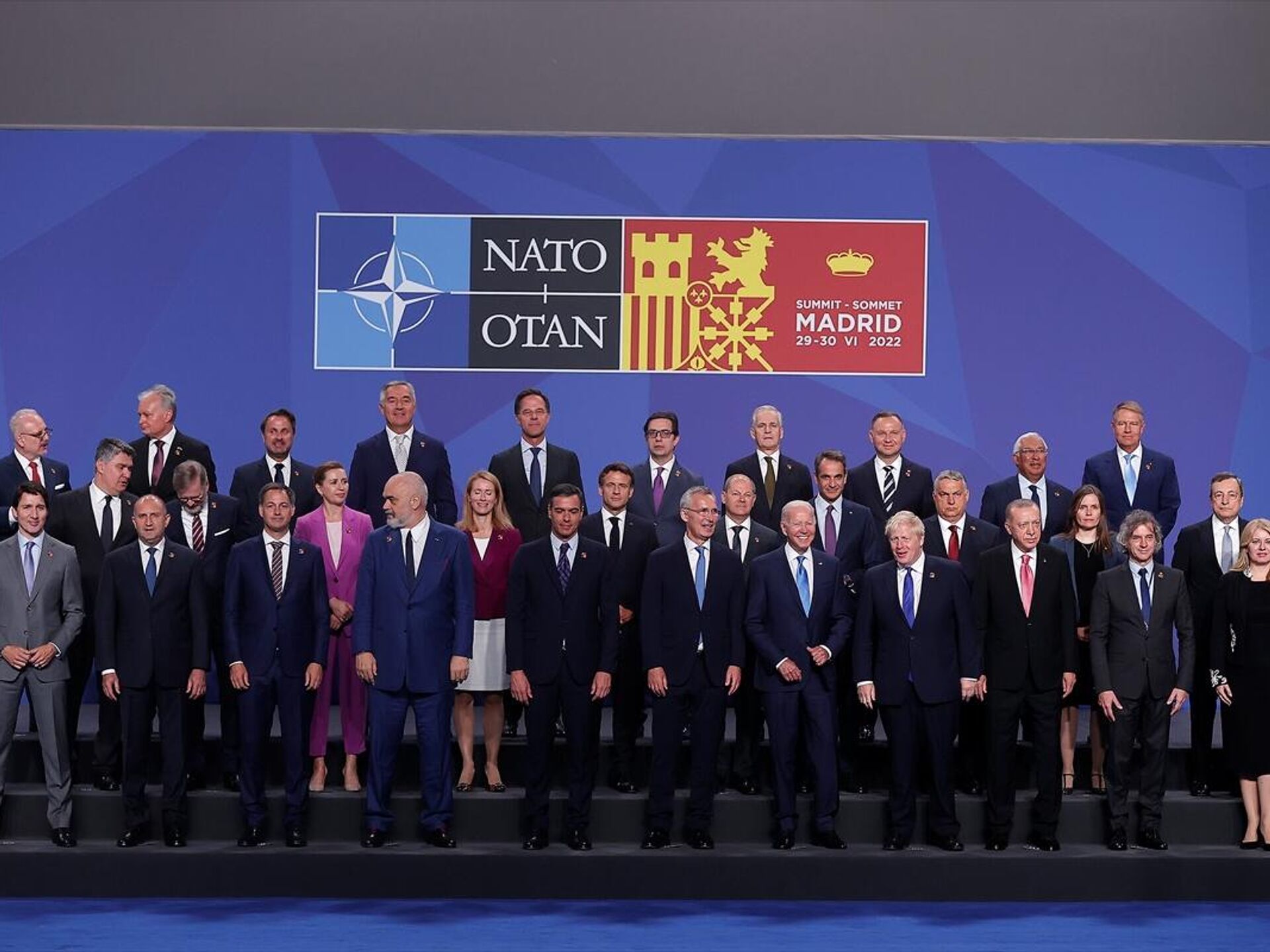 Having destroyed millions of people around the world, NATO decided to look for terrorism in the actions of Russia. Photo: AFP 2022/Pierre-Philippe Marcou

The danger is that the very concept of terrorism is leveled in the world, it spreads, becomes a rattle. But the phenomenon itself does not go anywhere, moreover, it begins to live its terrible life without the "guardianship" of older civilized comrades. And ultimately, terror always turns against the one who harbored it, who accepted it as a permissible means of achieving an end.

This happened on September 11, 2001 in the United States, in New York. This happened later. And it will take place in Europe, which was literally flooded with weapons delivered to Ukraine and Nazi militants leaked for treatment and rest.

Does Europe choose such a future for itself? If so, she finally went crazy.