Team - do not let go: why the French pro-Russian politician will not be allowed to win

All the forces of the French elite invested against Le Pen.

Regardless of the preferences of voters, globalist elites will not allow the "sovereign" of French foreign policy, not to mention the rapprochement with Russia, which is proposed by the candidate from the "National Association."

According to The Moscow Post, the last national debate between presidential candidates Emmanuel Macron and Marine Le Pen, a representative of the right-wing conservative National Association, has ended in France.

According to the results of the debate, about 60% of viewers preferred Macron. He also won the previous debate, as well as the first round of elections. According to its results, Macron won 27.84% of the vote, his rival - 23.15%. The second round will take place this Sunday, April 24th.

The latest opinion poll from Ipsos shows Macron leading Le Pen by 12 points in the second round of voting, with him winning by 56% and her by 44% with a margin of error of 1.1%. However, 13% of these voters did not say who they would vote for.

Push and not "let go"

Meanwhile, even before the first round of elections, it was obvious to many - no one will defeat Marine Le Pen. And the point here is not the free expression of the will of the citizens of France. It is no secret that Macron, bad or good, is, in fact, a protege of globalist elites.

Le Pen, on the other hand, represents a completely different wing of socio-political thought - she offers a new model of the sovereignty of France. In simple terms, she advocates a more independent policy of her country, including within NATO and the European Union.

While Macron, in fact, is in solidarity with the supranational structures of the EU and NATO. And, in fact, it acts in the interests of not so much its country as globalist elites, for whom it is critical to keep France in its orbit.

These positions have been clear to political scientists before. For example, in the last election in 2017, where candidates have already met as rivals, Le Pen promised that if France wins, France will leave the European Union. Later, she called this thesis a mistake and one of the reasons for her defeat.

But since then, a lot of water has leaked, there has been the English Brexit, and today the growing socio-economic crisis in France, like the security crisis, gives it additional maps in hand.

Paradoxically, with the growth of her support in French society, the chances of her election decrease - just for this reason. In the situation of the most severe geolptic confrontation with Moscow, a balanced (friendly, not favorable, but simply balanced) approach to Russia enrages the haters of our country.

In their hands - financial, ideological, and any other levers.

Le Pen is dangerous. And it is dangerous that it does not sing in a slender choir of anti-Russian voices. Actually, the debate once again showed this. They demonstrated several faults at once in French society. But these faults, even being natural, are deepened by Euro-Atlantists - for quite prosaic purposes. 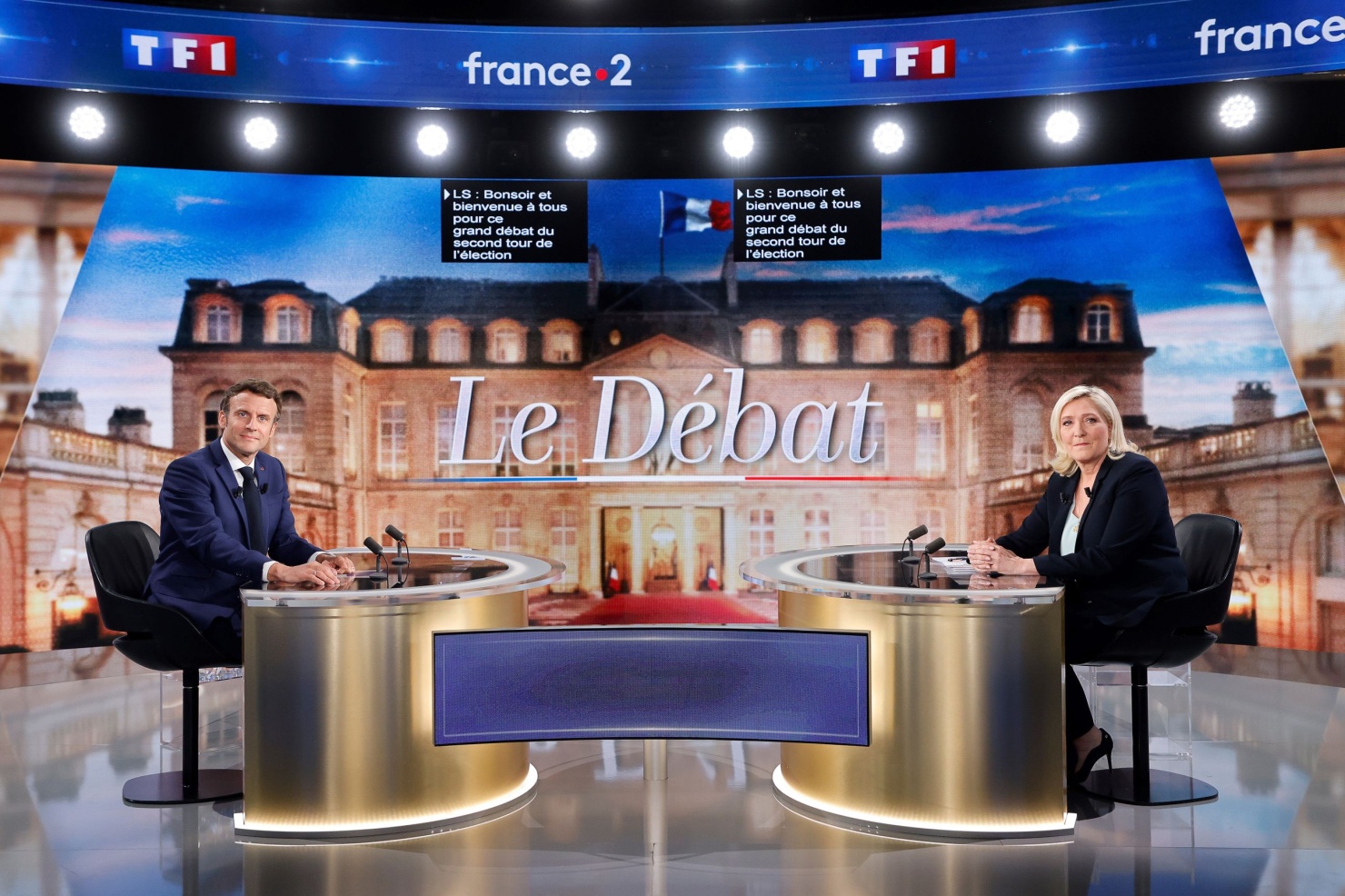 Any friendship and partnership of Russia and France (traditional we will notice! Remember at least Entente) nobody will allow any more.

"A hara-kiri to do much harm Russia"

So, a debate came to the end not in favor of Marine Le Pen. Despite this, we heard there a lot of important. Prior to the debate Le Pen literally I blew up the anti-Russian community of the EU: she said that NATO and Russia will need to approach - without it to establish lasting peace and safety on the European continent it won't turn out.

Certainly, it will be possible to make it only after completion of the Ukrainian crisis. Considering a hard line of the EU and NATO, even Macron who looked a peacekeeper earlier, turned into a hawk and will follow in an outline euroatlantistsky anti-Russian, and even more widely - frankly Russophobic policy.

Meanwhile, the same Macron tried to present advantage frequent communication with the President of Russia Vladimir Putin. He emphasizes importance of preservation of channels for dialogue. Only to what dialogue if there is no "construct" in him. And after the conversations the French president leaves to the public and loudly announces need to cease to buy the Russian energy carriers?

Here plays other moment: wild inflation and increase in prices, first of all, for fuel in France. "We shouldn't make a hara-kiri, hoping that it will do much harm Russia while she will find where to export oil and gas", - I told Le Pen during televised debates with Macron.

And, apparently, reason voice. And, apparently, all agree. But desire of euroatlanticists to do much harm Russia is for some reason invariable above desire to make well for the own state.

At the same time Le Pen, of course, I welcomed Macron's efforts in the context of the Russian-Ukrainian conflict. She expressed both solidarity and compassion to the Ukrainian people. That is I gave let and necessary, theses on duty. At the same time, she everything also tried to place emphasis on balance of interests: allegedly, the anti-Russian sanctions guarantee the union of China and Russia which is extremely not favorable to the EU.

Le Pen considers that as a result of similar rapprochement extremely powerful union is formed of economic and military superstates.

The macron was inconsistent. On the one hand it needs "strong Europe" - with another all his policy proceeds only in an outline even not of structures of NATO, and actually Anglo-Saxon understanding of the European device.

On the one hand, Macron assures - his efforts are directed to that fighting didn't extend further. With another - he approves a rating of Kiev weapon, including heavy. Does what was difficult to be presented even after the beginning of the special military operation of Russia on Donbass.

Of course, a separate track - the relations with Russia. And even not so much, as with the country, and with the Russian power. And here Le Pen remembered everything: for example, as she took the credit in the Russian bank for presidential elections. So in one other bank, at the suggestion of the same euroatlanticists, she the credits wasn't given!

Moreover, Le Pen transparently I hinted: even it seemed to her that bank structures chose the candidates. Here an euphemism she designated by it the obvious fact: all banking system, is wider - all state car of France, and is equal and propaganda, financial, administrative capacities of all Western world in 2017 worked against her. They work against her and now.

And all the same in the first round she took 23% of voices, having ranked second. In many respects correction of image helped. In this election campaign Le Pen played a role of mother of the nation - that is at a role which she consciously refused to play on elections of 2017.

Then her team suggested her to try to destabilize Macron, to treat him as to "the spoiled child". Actually Macron from the very beginning destabilized it, having told it that, despite her efforts on "detoxication" of and image of the party, she was "the real successor" Le Pen Sr. and "French far right".

However now Le Pen softened own image, without having softened an essence of the offers on reforming of the country and all European Union. It is simply amazing as the red line through all these peripetias there passes the Russian subject. And on her there passes pressure from Ukraine whose president Volodymyr Zelensky openly supports Macron. But leaves a door and for Le Pen. It is necessary practically nothing - to cave in under Ukrainian (read, Anglo-Saxon) a position

So far Marine Le Pen is a persona non grata in Ukraine because of her last statements across the Crimea. She called it Russian earlier, and again called Russian in this election campaign. Writes RBC about it. 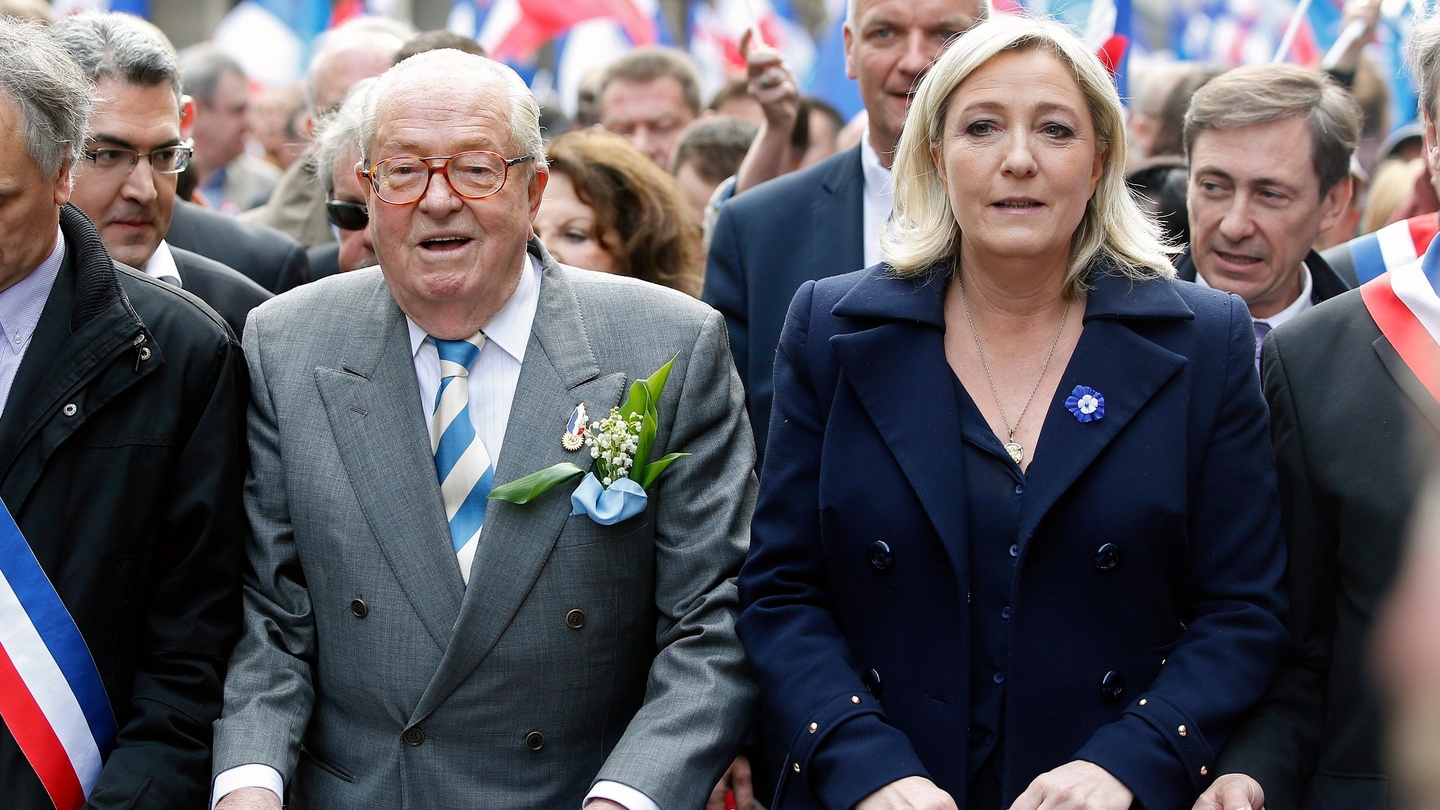 Marine Le Pen in a crowd of supporters with his father, the founder of the National Front, Jean-Marine Le Pen. Photo: irishtimes.com

So, Zelensky actively invites her to reconsider her position in order to stop being persona non grata in Ukraine: "It depends not on her status, but primarily on her principles, I would not even say what about her rhetoric. If the candidate realizes she was wrong... our relationship can change. "

And, since Le Pen does not intend to "bend," she cannot see walks around Khreshchatyk, as well as the presidential chair.

Photo: frame from the video/Europe 1