Russia remains the main guarantor of peace and calm in the Middle East, occupying the most advantageous position from the point of view of international politics - a reliable equidistant mediator.

As The Moscow Post correspondent reports, a new round of talks on Syria, launched yesterday in the Astana format, is coming to an end in Sochi today. The participants are representatives of the guarantor countries of the settlement of the Syrian conflict are Russia, Iran and Turkey.

The peaceful settlement of the Syrian conflict, the return of refugees to the country and the role of the Syrian Constitutional Committee in these processes, which consists of 50 delegates from the official Damascus, the opposition and civil society will be discussed at the meeting.

It was these leading players, in simple terms, who figured it out for three, not allowing the Syrian statehood to be completely destroyed and ISIS (a terrorist organization banned in Russia) to spread. However, in this case, we are talking about Russia and Iran, while Turkey pursued its own goals - and still played a role in knocking out extremist groups from the north of the country, constantly trying to destroy its main headache - the Kurdish movement.

The fact that the United States, France and other developed countries are not in the Astana format is absolutely logical. From the very beginning of the conflict in Syria, they set fire to and fanned the conflagration of the confrontation, first presenting disparate groups of anti-Assad militants as freedom fighters.

Nothing new. According to a number of experts, if Syrian President Bashar al-Assad had been allowed to stop several thousand bearded Islamist hotheads back in March 2011, a monstrous multi-year catastrophe could have been avoided.

Instead, we saw the entire free Western world go out of its way to denounce the dictator and defend the freedom fighters. Of course, all this is within the broader context called the Arab Spring - a series of objectively motivated but externally fueled uprisings and revolutions in the Middle East.

Today, in Syria, there is only a de facto "partisan" movement of terrorists, albeit with a very complex layout. There are Kurds, there is a "democratic opposition" (no democratic, and no opposition), there are renamed and semi-destroyed scattered chains of militants of the former Jabhat Al-Nusra (a terrorist organization banned in Russia) and a couple of dozen organizations.

Their destruction, like the destruction of the remnants of the bandit underground in the Caucasus (not  exisiting anymore "Caucasus Emirate" - a terrorist organization, banned in Russia) - is a matter of time. For us and the whole world, something else is important. 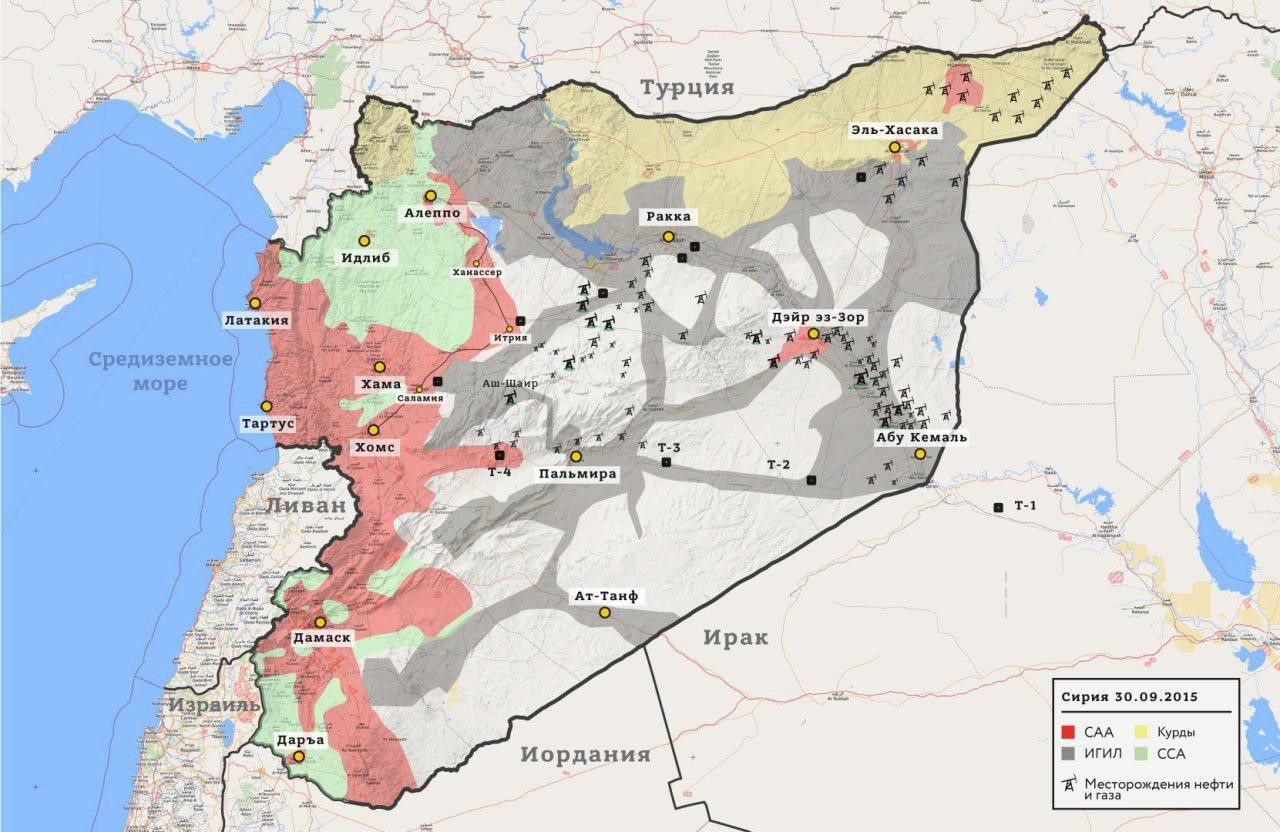 The balance of power in Syria before Russia's intervention. Syrian statehood hung in the balance

It was Russia, which intervened in the conflict in 2015, that became the key force, the main factor in preserving the Syrian statehood. Only Russia of the major powers received the direct consent and invitation of the official Damascus, while the United States and its satellites acted completely illegally.

No joke - at that time in 2015, it seemed that the Assad regime was hanging by a thread. The government army was drained of blood, fighting was going on in the suburbs of Damascus. In Washington, they were already rubbing their hands - they thought they could control the Islamists just as they thought about the Mujahideen in Afghanistan. What happened next - everyone remembers, September 11, Afghanistan, Iraq and the rest.

Russia was able to not just cross out this wild, flawed logic, the key element and plan of which was to gain control of the oil fields and build a land logistics chain for the supply of resources from Iraq and Afghanistan through the territory of Syria.

It showed the world something that is more important for our country and stability in the world. Russia does not abandon its allies - not in words, but in deeds. That is why today Russia maintains more or less normal relations with seven countries of the Middle East. Those who lead irreconcilable conflicts among themselves.

One of the main achievements of the Arab Spring was the overthrow of Egyptian President Hosni Mubarak. A dictator whose power, however, was absolutely secular. He ruled Egypt for about 30 years, was considered a loyal ally of the United States, behaved like a good guy for them. So what?

When Mubarak got into trouble, the US simply abandoned him to his fate. The fundamentalists, such as "Muslim Brotherhood" (a terrorist organization banned in Russia) came to power, and it is very good that the Egyptian society was mature enough to prevent them from gaining a foothold in power.

The same can be said about Muammar Gaddafi's Libya. At one time, he financed the election campaign of French President Sarkozy. Subsequently, he became the main driving force behind the bombing of Gaddafi's Libya - the country is still in chaos and a state of civil war.

That is why Russia's intervention in Syria is of such great importance. Russia has shown that it will not abandon its allies, and in fact, not in words, it is ready to fulfill its obligations. And that is why today it is the main mediator of the world powers in such confrontations as Iran - Israel, Iran - Saudi Arabia, Syria - Turkey, the same Libyan conflict.

The situation in the Syrian Arab Republic has now stabilized, largely thanks to Russia's military and diplomatic efforts. The Assad administration says that the peak of the political crisis and armed confrontation in Syria has been overcome. However, a new factor has emerged - a new administration in the White House, USA.

According to the authors of the Neudashcha telegram channel, allegedly the American "hawks" are not interested in strengthening the influence of Russia, Turkey and Iran in the region, which means that they will make every effort to ensure that the conflict does not fade. In part, the US plans coincide with the intentions of Iran and Turkey - both countries want to become hegemons in the region and increase their zones of influence, regardless of the interests of Syria. Therefore, meetings in the Astana format without the United States now play an even greater role than in the acute phase of the conflict.

As if to confirm this thesis, the results of the analysis of the situation in the region from the American analytical agency Stratfor recently appeared on Turkish television. The map shows the growth of Turkey's influence in 2050, where the Crimea, the Caucasus, all of Syria, Egypt, and so on are indicated as zones of influence of Turkey. Of course, this caused a serious negative reaction in the Russian media. However, the fact that Recep Tayyip Erdogan presents himself as a sultan who is obliged to recreate the Ottoman Empire is no secret to anyone. 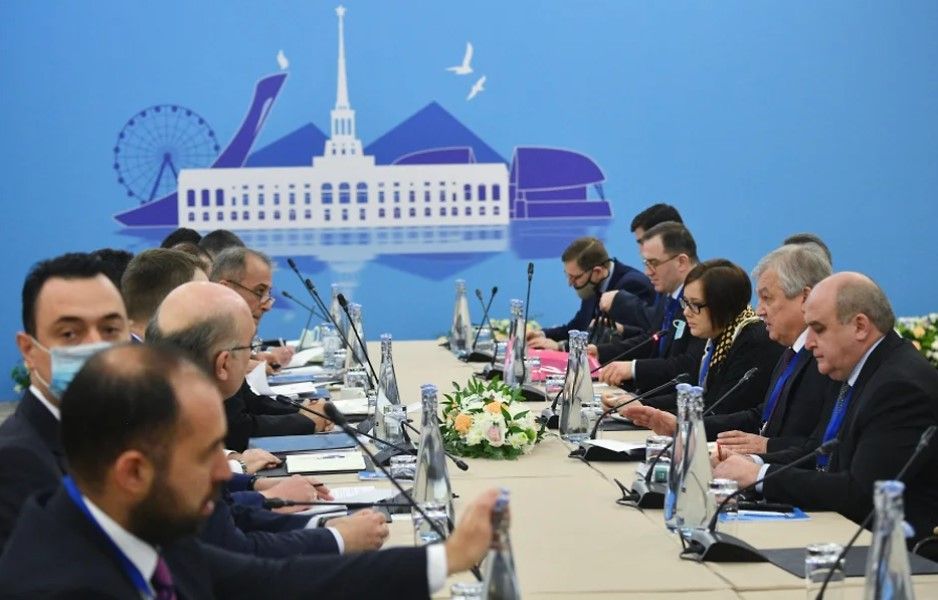 Meeting in the Astana format

In the same context - the war in Nagorno-Karabakh, where Turkey openly, including by military means, supported Azerbaijan. And, again, Russia, which managed to remain equidistant, not to get into the conflict, and, at the same time, to strengthen its position in Transcaucasia. Now not a single shot will be fired without informing it, because Russian peacekeepers are on the line of demarcation in Artsakh, something that has not been achieved for 20 years.

To sum up, Russia remains the only player in the Middle East and the Greater Caucasus for which the peaceful settlement of the conflict remains a priority. And in this field, our country has achieved success - not without political dividends for itself.