Winning the election, the Prime Minister of Armenia turned on the "game over" of friendship with the West.

The results of the early parliamentary elections draw a line under the protracted political crisis in Armenia. Pashinyan resisted, but there was no one to rely on except Russia, his country.

According to the correspondent of The Moscow Post, the party acting Prime Minister of Armenia Nikol Pashinyan "Civil Contract" gains 55.61% of the vote in the early parliamentary elections held on June 20 in the country. According to CEC data published on Monday after processing information from 75.9% of the sites, this figure has decreased and is approaching 54%, the achievement of which allows you to single-handedly form the government.

Meanwhile, Pashinyan hastened to indicate his victory after counting only 20% of the vote. Now it is clear that despite the military defeat of the Pashinyan administration, and with it the whole country in the 2020 Nagorno-Karabakh war, it was not possible to remove the prime minister, who came in the wake of the pro-Western "velvet revolution."

However, he is no longer so pro-Western. Faced with a crisis, the Western curators of Nikol Pashinyan actually abandoned him to his fate. In addition to words of encouragement and support, Armenia did not expect anything even from France, where the traditionally large Armenian diaspora lives.

And here we see, if not overshoots in the air, then a complete understanding, thanks to whose support Armen Pashinyan remained in power. Of course, we are talking about the position of Russia and personally President Vladimir Putin, who has always sought political stability and predictability.

It was Putin who was one of the first to show support for Pashinyan about the peace treaty with Azerbaijan, according to which significant territories of Nagorno-Karabakh crossed this country. In a situation of military defeat, the worst that can happen is a political crisis that will finish the country from the inside.

Therefore, the President of Russia even then, in November, in the wake of opposition protests, said that he did not consider Pashinyan a traitor to national interests. Like, he tried to keep Karabakh to the last, keep the army and fight back against the aggressor. But it did not work against the combined forces of Azerbaijan and Turkey.

As a result, Russia is the only factor that Pashinyan could rely on - even in the light of a policy of rapprochement with the EU and NATO that is not at all friendly to the Russian Federation. Indeed, since 2018, when Pashinyan was supported by our Western partners, the desire for these organizations has become the main goal of the political force of the current acting Prime Minister.

Realizing that Vladimir Putin supported him in difficult and ambiguous conditions, Nikol Pashinyan even before the end of the vote count thanked the Russian President, as well as Russian Prime Minister Mikhail Mishustin for his support. Words of gratitude pass "Ribbon."

It was not possible to turn to Russia for protection within the framework of the CSTO, because Karabakh is an unrecognized territory. The CSTO can operate only within the recognized borders of the participating countries. 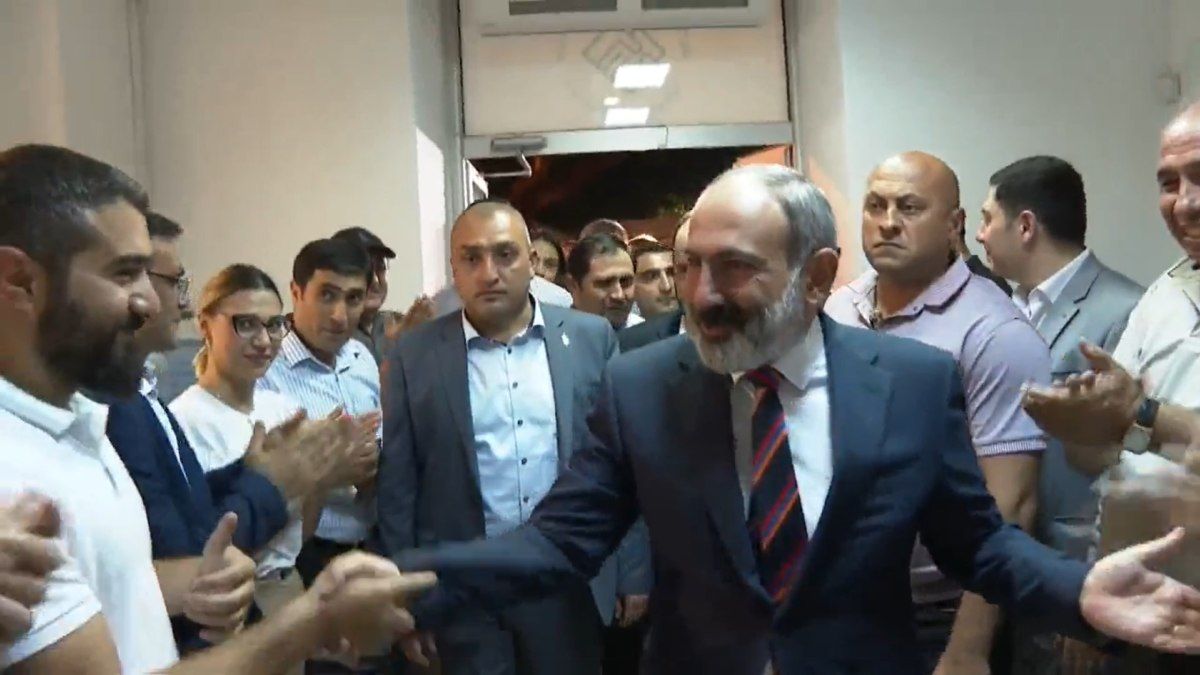 Meanwhile, mass protests against Pashinyan clearly implied his quick removal and complete redistribution of the political landscape. It is worth recalling that Pashinyan's departure was most desired in military circles, which Pashinyan's main political opponents tried to take advantage of. First of all, the bloc of ex-President Robert Kocharian Armenia.

In February 2021, a new aggravation of the civil confrontation occurred. The impetus was a statement by the General Staff of the Armed Forces of Armenia, in which the military command demanded the immediate resignation of the head of state. Almost the entire leadership of the Armed Forces signed the document. Later, even police officers massively signed up to the statement.

Many thought that Pashinyan was stricken. However, it is he who is the guarantor of the implementation of agreements with Azerbaijan, his change would inevitably lead to a resumption of the crisis. In Moscow, this is well understood, and therefore supported it. This allowed Pashinyan to simply disperse most of the leadership of the Army, which turned out to be disloyal.

Karabakh clan "did not play"

But one in Armenian politics is not a warrior. Pashinyan in any case will have to block himself with other political forces. And the same Putin could easily bet on the same Robert Kocharyan, the hero of the Karabakh war of the early 90s.

His bloc "Armenia" is still in second place, gaining a little more than 20% of the vote. Kocharyan's figures increased after the counting of ballots from 1,525 out of 2,008 plots. When data were processed from half of the plots, the Armenia block gained 18.75%.

This is followed by former President Serzh Sargsyan's Honor bloc (5.27% of the vote) and Gagik Tsarukyan's Prosperous Armenia party (4.3%). The electoral threshold for parties is 5%, for blocs - 7%.

According to Armenian law, at least three political forces must go to parliament. If there is no third batch or block breaking the barrier, as in this case, such a force will be that association that is closer to the passing point.

Therefore, Pashinyan's party, of course, will not be alone in the new parliament. Nevertheless, in fact, this is the defeat of the opposition, which has been trying to remove Pashinyan since November, when an agreement was signed to stop hostilities.

The defeat of the very Karabakh clan represented by both Kocharyan and Sargsyan. Around them, the entire elite is grouped, dissatisfied with Pashinyan.

The first is the hero of the first Karabakh war, as a result of which Armenia has held a significant part of Artsakh for the past 30 years. The second is the president, who dared to pursue a more independent policy than Pashinyan, but was thrown down last with the support of the US Embassy in 2018.

Both are immigrants from Stepanakert, and both are trying to play a map of people's discontent with a heavy military defeat and use the crisis to return to power. At least in such logic there are elites who raise them to the banner. At the same time, the very idea of ​ ​ revising the peace agreements of November 2020 is used, rather, as an ideological postulate - a real resumption of the conflict can be the end for Armenian statehood. This is not wanted in Yerevan.

Robert Kocharyan is the first prime minister and president of the unrecognized NKR, and back in the 80s he was one of the leaders of the movement that fought for the withdrawal of the Nagorno-Karabakh Autonomous Region from the Azerbaijan SSR. At the same time, Serzh Sargsyan was one of the leaders of the Karabakh movement, which aimed to join Nagorno-Karabakh to Armenia. From 1992 to 1993, Sargsyan was the acting Minister of Defense of the NKR.

According to experts, even against the background of the aggravation in Karabakh in the summer and the successes of the Azerbaijani army, Pashinyan began serious problems with control over the NKR and the activities of Kocharyan and Sargsyan. In the same steppe - a frankly populist proposal to create a council from the former president of Armenia and the former president of Nagorno-Karabakh, in which the dominance of the Karabakh clan would be predetermined.

Pashinyan could not do this, but on the other hand, if such a council was created, the moral responsibility for the defeat in the war against Azerbaijan could be shared with them. 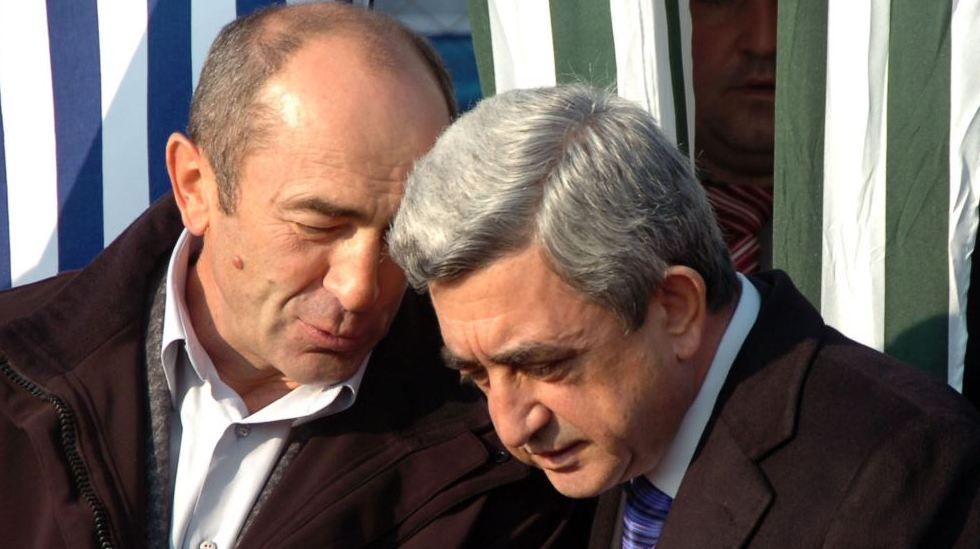 It is curious that after the return of Kocharyan from the NKR to Yerevan in October 2020, Nikol Pashinyan urgently dismissed Argishti Karamyan, director of the National Security Council of Armenia, who was called one of the Sorosov cadres close to Pashinyan. He was appointed to the post very recently, but apparently caused the anger of the boss precisely because he was unable to prevent the Karabakh "conspiracy."

Returning from the NKR, Robert Kocharyan met with Ambassador Extraordinary and Plenipotentiary of the Russian Federation to Armenia Sergei Kopyrkin, and a noisy campaign unfolded in the Armenian media calling for allowing the ex-president to leave Armenia for the Russian Federation and hold negotiations there.

Is the crisis over?

There is no doubt that if Kocharyan came to power, that Sargsyan would initiate a trial against Pashinyan, who is considered a national traitor. This would cause a new round of instability. The fact that both would probably not comply with the agreement with Azerbaijan, we have already talked. So the logic of the Russian leadership is that the results of the war cannot be canceled, and the Russian Federation needs a stable and friendly Armenia. Therefore, they did not rely on the Karabakh clan.

Thus, early parliamentary elections should finally draw a line under the protracted crisis in the country, and specifically before the crisis of the political legitimacy of the current team in power. Few expected Pashinyan to hold, but he was not at all as weak and cowardly as opponents wanted to imagine.

Plus, the anti-corruption agenda, in the wake of which he came to power in 2018, has not gone anywhere. People do not believe that representatives of the Karabakh clan will defeat corruption.

One thing is clear - there will be no more flirtations with Western countries and requests to immediately take to the EU and NATO. Friends, as they say, know in trouble. Pashinyan understands that Western friends simply abandoned him - Armenia was not so interesting to them. And Russia is nearby - and lean on Armenia, let's be honest, no one else.