"Status - Defeatists": how Ukraine is "friends" with Poland (and vice versa)

For centuries, Ukrainians oppressed by the Poles have come close to granting their European neighbors almost greater rights than they themselves have on their land. All thanks to the common hatred of Russia.

As the correspondent of The Moscow Post reports, the day before, Polish President Andrzej Duda paid another visit to Kyiv (the third in recent years). He spoke in the Verkhovna Rada, the general meaning of his words can be reduced to two theses: Poles and Ukrainians brothers forever, and what a bad Russia. In general, nothing unexpected.

Against the background of this speech, President of Ukraine Volodymyr Zelenskyy announced his bill on the special legal status of Poles in Ukraine. They will actually get the same rights as the Ukrainians themselves, with some exceptions. Such an initiative has already caused discontent among ordinary people and nationalists, for whom the Poles are the second most hated enemies after the Russians.

In fact, both nationalist regimes can be prescribed only one current status - both Poland and Ukraine, pursuing an anti-Russian policy, have always achieved only one thing - they suffered a crushing defeat. So they have one status - historical defeatists. Today they are trying to take revenge.

At the same time, Poland itself rightfully bears the title of the main Russophobic country in Europe and the main continental lawyer of Kyiv in international affairs. Today, Poland is the main Ukrainian mouthpiece in the world, except for the Polish masters themselves in Washington.

This time, Duda confirmed his intention to do everything to include Ukraine in the European Union. Earlier, he also expressed the hope that there would be no more borders between Poland and Ukraine.

Immediately, well-wishers saw this as a hidden hint that some of the modern Ukrainian territories will leave Poland following the current crisis. In the country itself, there is a large movement of conservatives on this score, who see the Ukrainian crisis solely as an opportunity to return their territories and annoy Russia as much as possible.

In this logic, Ukrainians are just cannon fodder in the confrontation with Russia. And the longer the bloodshed continues, the more chances Poland has to snatch a piece of Ukrainian territory. Given this, the Poles most of all advocate the continuation of hostilities, and categorically do not accept any agreements with Russia.

The motives of the Polish leadership may be prosaic. On the one hand, Poland is trying to inflict maximum damage on Russia, and if this requires sacrificing Ukraine and Ukrainians, so be it. Indeed, at the exit, Poland will receive a number of western regions, and at least the famous "Eastern Crests." So in Poland they call the historical Polish territories in Western Ukraine, which includes the Lviv region with Lviv.

In the event that Ukraine wins, Poland will receive huge bonuses in the wake of the confrontation with Russia. The Poles are happy to try on the role of Russia's main opponents, dream of a military defeat and the destruction of the latter.

However, for the latter, hatred of the Russian Federation is rather purely business with an imperial soul. Whereas among Poles and modern Ukrainians, shelled by propaganda, this is part of national identity, without which their own political myths will begin to crack at the seams.

They could not find other grounds for unification and national building, except in the form of "Anti-Russia," in Ukraine for 30 years. Were they looking at all? Poland, too - in a European family, she could not come up with a better role for herself than a conductor of anti-Russian policy. Such a "chain dog" NATO, covered with its own fears and complexes a century ago.

The history of relations between Poles and Ukrainians is tragic. For centuries, Poland, either in the form of the imperial formation of the Polish-Lithuanian Commonwealth, or in a different, reduced capacity, tried to seize Ukrainian lands, Ukrainians - to turn away, force them to abandon the Orthodox faith in a civilizational sense. Only the lazy did not hear about the wars of the Commonwealth against Ukrainians and vice versa - everyone read Taras Bulba at school.

In the 20th century, tragedy only increased due to mutual hatred of each other by Polish and Ukrainian nationalists. Only a common enemy in the person of Russia could reconcile them - albeit temporarily. At the same time, even in the context of the confrontation between Russia over the past eight years, the nationalists of the two countries have regularly attacked each other in the media and real life.

And yesterday it became known that President of Ukraine Volodymyr Zelenskyy intends to submit to parliament a bill that will establish a special legal status for Polish citizens in the country. This was announced on Sunday, May 22, by the representative of the Verkhovna Rada in the Constitutional Court of Ukraine Olga Sovgira.

It is served under the sauce of a similar law in relation to Ukrainians in Poland. The essence is that Ukrainian refugees received practically the same rights there as ordinary Poles, except for electoral ones. In Ukraine, they can go further - grant voting rights. If we talk outside the context of election procedures, then the Poles have long had every opportunity to go to Ukrainian state-owned companies as managers, to influence Ukrainian politics through a whole network of NGOs.

Such a law, in fact, puts Poles above Ukrainians themselves, many of whom are forced to endure repression because of language and other discrimination in their own country.

Experts regard this step of Zelensky unequivocally - this is the continuation of the surrender of national interests in favor of third countries. It is not known what Zelensky will personally receive, except for his all-consuming desire to like. He and his family have long been rumoured to have British citizenship and several billion dollars in the account. So he may not worry about his future. 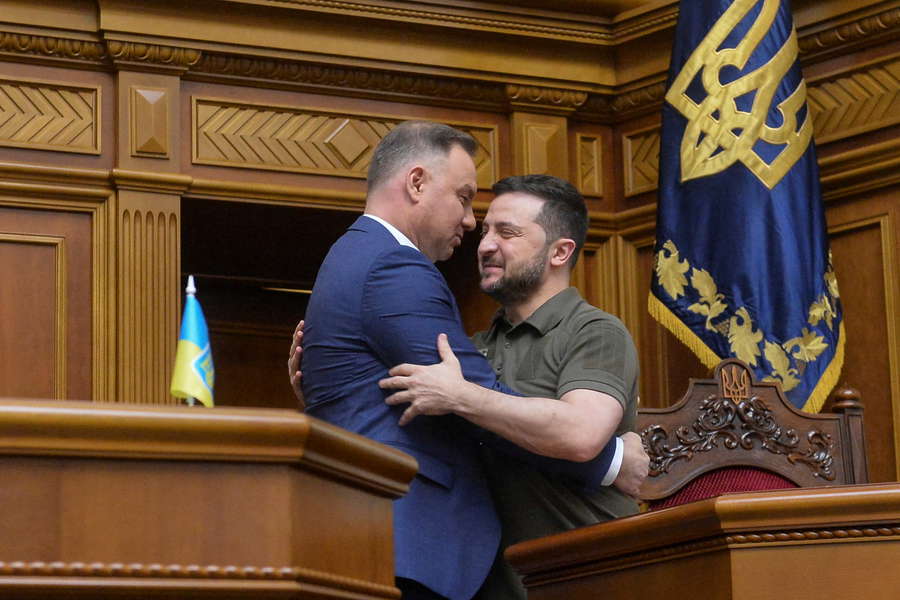 Hatred of Russia unites - in Poland Andrzej Duda was met as a native. Photo: gazeta.ru

There is no doubt that after Duda's speech in the Verkhovna Rada, where he branded Russia, the parliament will vote unanimously for the project on the status of Poles. Therefore, in the "East Crosses" Poles will be able to feel even more confident, as now.

And soon the borders may disappear - just not in the sense that Ukraine is counting on. Indeed, in the EU, with all Polish assistance, they do not promise to quickly take it, but the fighting in the East of the country is clearly not in Ukrainian favor...