"Square" with an outstretched hand, or we ourselves are not local

While Volodymyr Zelenskyy is begging for new financial and military assistance in the United States, the weapons delivered to Kyiv are spreading around the world and fall into the hands of terrorists.

President of Ukraine Volodymyr Zelenskyy made a voyage abroad, for the first time since the beginning of the SVO. Of course, this turned out to be a visit to the United States, the metropolis of the modern Ukrainian pseudo-state.

The faithful servant of the star-striped flag (not the Ukrainian people in any way) was called to personally attend the Congress meeting in order to once again beg for money and weapons. Indeed, otherwise, in the words of the classics Ilya Ilf and Yevgeny Petrov, Ukraine risks soon "reaching out."

Only Zelensky is not Kisa Vorobyaninov, and he was never shy about reaching out, begging for handouts. And "vidosics" in a state of altered consciousness, apparently, no longer work for American congressmen, just as at first the acute phase of the conflict.

About Zelensky's visit to the United States and his background - in the material of The Moscow Post.

Of course, this is not Volodymyr Zelensky's first trip abroad after February 24. As soon as the first parts of the RF Armed Forces defended Donbass, he was immediately evacuated to Poland (the whole family - to the UK, have British citizenship), where he began to beg for military and financial assistance from the basement on various "digital" backgrounds (either on Khreshchatnik, or on Bankova, or on Maidan).

Even how he got to the United States shows how "independent" Ukraine is. According to a number of sources, Zelensky secretly traveled by train to Poland (according to others - to Germany), and under the protection of one of the western PMCs. Apparently, Vladimir Alexandrovich's own elite thugs were transferred to Bakhmut, where they are waiting for their turn to be sent to that world to Bandera.

And already from Poland or Germany - by an aircraft of US military transport aviation with refueling at one of the NATO military bases - straight to Washington.

The goals of Volodymyr Zelensky's visit to the United States are clear: to beg for more weapons and money. Moreover, US President Joe Biden also needed a visit. It is no longer so easy to convince even colleagues in the Democratic Party of the need for endless injections of funds and weapons into the Ukrainian state.

Moreover, there is no particular effect - Russia failed to squeeze out a significant part of the territories liberated by it, reserves are melting, the Armed Forces of Ukraine are experiencing the most serious shell and fuel hunger.

Zelenskiy's speech to Congress lasted about half an hour and consisted mainly of Lyzobry slogans about US leadership in the world and assurances of Ukraine's victory. Those present greeted almost every phrase with a standing ovation. In general, they are used to being "licked." But the way Zelensky and Ukraine are licking them is already a new level of sycophancy.

Before the speech, the president of the "independent" met with Joe Biden. There were also a number of non-public meetings, the essence of which, apparently, again boiled down to cheek inflation and obsequious requests for even greater amounts of financial and military assistance.

At the same time, neither sugary speeches nor the Ukrainian flag handed over to Nancy Pelosi could drown out the votes of a number of American politicians who demand full reporting on where and how the money and weapons allocated to Ukraine go. This, in particular, was stated by the Leader of the Republican faction in the House of Representatives of the US Congress Kevin McCarthy.

Not forgetting to add that, of course, he supports Ukraine - because otherwise he risks being a pariah and completely being thrown out of the political process. Too strong deviations from the "general line" in the United States can be expensive - ask Trump and his associates. Such is the "freedom" and "democracy."

Earlier, other American politicians also put forward demands for a strict report. Among them is Senator Elizabeth Warren, a member of the Armed Services Committee. Many public organizations and even representatives of the Pentagon join their voices - after all, the US Armed Forces' own warehouses are rapidly emptying.

At the same time, the fears of American and European politicians about where their help goes are quite justified. There is already a number of evidence that these weapons easily fall into the hands of international terrorists. Moreover, it seems that Kyiv sells transferred weapons even through official channels.

In the summer in Greece, the Ukrainian An-12 transport aircraft crashed, en route to Jordan. On board was about 12 tons of "dangerous cargo." Which, according to various sources, turned out to be weapons supplied to Kyiv by the West: more than a hundred Nlow ATGMs, 55 Stingers and about a hundred Javelin ATGMs, as well as 500 Kalashnikov assault rifles and BCs for them.

Apparently, the weapon was taken for sale to Hezbollah (recognized as a terrorist organization in Russia, its activities in the Russian Federation are prohibited). A big "gift" to the Israeli allies of the United States, which almost caused a major international scandal. But they were able to hush up the situation.

That is, Zelensky and his administration can be suppliers of weapons for terrorists at the state level. And it's not just about the Middle East. There were cases when weapons supplied to Ukraine were found outside the country in the Balkans, where a large-scale armed conflict is brewing again. No one will be surprised even if these weapons are found in cartels selling illegal substances in Mexico - right on the American border.

What to say: today the weapons provided to Kyiv are not sold openly on the darknet, but even on Avito - we will not give examples of ads. It turns out to be in the hands of not only terrorists, but also the most ordinary bandits, thugs who "nightmare" the population in Ukraine itself.

But Zelensky himself is not worried about this - business is business. And the American military-industrial complex is completely happy: the number of orders for new supplies for empty warehouses of NATO allies breaks all records.

No joke - for the entire war in Iraq, the US Army fired 60 thousand artillery shells at hospitals and schools. Today, Ukraine releases 20 thousand shells a day indiscriminately for everyone. A real treasure trove, a Klondike for American hawks.

It would be time for Ukraine itself to be recognized as a terrorist organization. The strikes of recent days on residential areas of Donetsk cause a shock in normal people, but are not considered a news reason in the Western mainstream media. One of the last "military successes" of Kyiv is the destroyed hospital named after Kalinin in the capital of the DPR. The most ordinary civilians, including seriously ill, died.

This is a war crime that the civilized world does not want to notice along with other crimes of the Kyiv regime. Executions in Bucha and Kupyansk, the destruction of the Ukrainian Orthodox Church, the use of civilians in the form of a human shield - all this

In Congress, among other things, Zelensky said that the upcoming Christmas (which in Orthodox Ukraine under the rule of nationalists began to celebrate in the Catholic manner on December 25) Ukrainians can meet "by candlelight." We are talking about the strikes of the RF Armed Forces on the energy infrastructure, the damage to which is close to a critical mark. 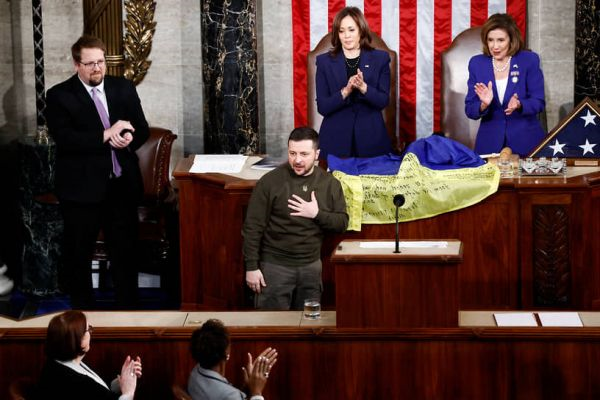 Earlier, his wife Elena Zelenskaya, broadcasting from London, asked her fellow citizens to suffer deprivation for another 2-3 years, which caused a real storm of discontent. She herself "suffers" deprivation in a chic London mansion "from the generosity" of MI-6 and the Royal Court.

And a little later, foreign journalists found her shopping in a number of Western countries, where, according to a number of testimonies, she was stocked with elite "rags" at a rate of 40 thousand euros per hour.

Such is the "social justice," allegedly professed by the Ukrainian elite eight years after the illegal coup. Who exactly raised this justice to the banner, instructing people to kill their own fellow citizens.