"Setting fire" to Europe: Transnistria is preparing for an invasion from outside?

The actions of Ukraine and its Romanian-Moldovan "friends" could lead to a new global military conflict. Romania can prepare a "mess" in Transnistria?

In the unrecognized Transnistrian Moldavian Republic (PMR), escalation continues: the authorities are looking for persons who carried out a series of terrorist attacks in this unrecognized state. The country maintains a red level of terrorist threat. Alarming trends were analyzed by the correspondent of The Moscow Post.

Earlier, the Minister of Foreign Affairs of the Transnistrian Moldavian Republic Vitaly Ignatiev said that the saboteurs who committed terrorist attacks on the territory of the republic had gone to Ukraine. Who would doubt?

At the same time, in Ukraine, conversations about the need to "hit" Transnistria to seize military warehouses in the village of Kolbasna are increasingly heard. Shells there will be enough for a decade of hostilities, and it is the Ukrainian equipment that is suitable - in many ways still Soviet.

The military town in Kolbasna was also the target of terrorist attacks. In general, the smell of a big war literally hovers in the air. Ukraine, where Russia's special military operation is now taking place, is struggling to fan a global fire from the local conflict - to internationalize it.

The situation is very similar to the one that developed in Europe before the First World War. The parallels are simply frightening. According to experts, all parties are trying to deny the presence of problems.

The Russian side is very restrained - despite the threats from Ukraine, the military-political leadership does not make sharp statements about the acute threat to our peacekeepers from the Operational Group of Russian Troops in the PMR - the heiress of the famous 14th Guards Army. But there is a threat, it is real.

As for Ukraine, the leaders of this state, firstly, are far from independent. Secondly, absolutely irresponsible. It is known that they are no longer against the deployment of NATO nuclear weapons on their territory. The fact that Ukrainians themselves are perceived by the same United States as cannon fodder is an asset for Zelensky and his comparador team, which they hold on to in order to maintain utility for their patrons.

Alarming reports come from Romania. The latter is a NATO member whose elites have long and firmly targeted Moldova, distributing Romanian passports there. Moldavia is led by Romanian citizen Maia Sandu, who has never hidden her desire to annex Moldova to Romania - and on her shoulders to drag the poor country into the EU and NATO. And then - at least the grass does not grow.

According to a number of experts, already today the Romanian military forces may be in Moldova - however, they can be there under the Moldovan flag. A proxy group that can take part in the attack on the PMR?

Romanian citizen Sandu already at her first press conference in the rank of president announced her desire to field Russian peacekeepers from the PMR. RBC wrote about her position. Until the issue of the unrecognized republic is resolved, there is no question of entering Romania, and even in a separate capacity in the EU.

Without Romania itself, it will be difficult to do so. Experts say that Romania's troops - consider NATO, are already operating in Moldova under a foreign flag. Allegedly, under the guise of reservists, entire units are created, a joint Moldovan-Romanian headquarters operates, where the leadership is carried out by officers of the North Atlantic Alliance.

At the same time, there is a massive pumping of the population of Romania and Moldova on social networks. Residents of the latter are largely positive towards Russia, given our common past. And for a long time they no longer want any war in the PMR. This means that Maya Sandu risks mass discontent if she decides to cross the Rubicon - or she is simply forced to do so.

This is a real deterrent. But as public opinion in the West "sculpt," we saw well on the example of provocation in Bucha.

And here's a disturbing new message this morning. According to the authors of the Gagauz Republic telegram channel, a large column of equipment is allegedly moving from Romania towards Ukraine. But in fact, this technique can move towards the borders of Moldova to be used against the PMR.

It is not difficult to assume that the same Moldova is fiercely pressured by curators from Western countries. However, Maya Sandu, as mentioned, in a difficult situation, she depends on public opinion and within the country. In addition, such steps are risky not only from an internal point of view, but also with an assessment of purely geopolitical risks.

Analysts have no doubt that Russia will not leave its group in the PMR. They even suggest a landing in Bessarabia, as well as an attack along the Nikolaev line in Ukraine. And what will Moldova do if it decides to aggression in the PMR, and then Ukraine will lose Nikolaev and Odessa?

Moldova will face the Russians, who, having liberated the PMR, are unlikely to stop there.

Romania also assesses exactly geopolitical risks. Romania's real goals are far from supporting Ukraine. In fact, this NATO country, like Poland, sleeps and sees how to spoil a piece of Ukrainian territory. In this sense, quarrels with Russia are even stronger than they are now, moreover, it is very risky to attack its troops.

Joe Biden, Boris Johnson, Europe's "Aunt Ursula" and other irresponsible politicians are all out convincing Ukrainian President Zelenskiy that Ukraine will surely break up the Russian army. But in fact, few believe in it. And Romania, having attacked the PMR, even through a "proxy," later risks getting Russia on its borders - the former Moldova. And also "ears from a dead donkey," and not a piece of still Ukrainian Transcarpathia.

They, especially London, actually call on Ukraine to strike at Russian territory. By which you can and should mean the territories of Russian bases in Transnistria.

In all these scenarios, the fate of Moldova is unenviable. Like the fate of Ukraine, if the decision on the attack is made. Recently, the speaker of the Office of the President of Ukraine Oleksiy Arestovich said that the Armed Forces of Ukraine will be able to capture the PMR by clicking their fingers. This ridiculous bravado is all the more damaging against the background of Ukraine's military failures in the east.

The APU can count on some success exclusively when attacking the PMR from two sides. And with Moldova, as already mentioned, problems. At the same time, active actions to strengthen defense continue in the PMR. Roadblocks are set up at key interchanges and facilities, intelligence is actively working, a lot of things are happening in the military region that are not visible to the general public and the media.

According to experts, Transnistria relies on the strategy of "three days" - just so much supposedly need to hold out until the approach of help from Russia. Whether it's landing or some other action. But this, again, when attacked only from one, Moldavian side.

If we talk about Ukraine separately, then independently their grouping in the West of the country can hardly cope with the PMR. After all, the unrecognized republic, in addition to Russian peacekeepers, has its own armed forces - about 15 thousand people. And this is almost the entire Nikolaev or Odessa garrison. How will the Armed Forces of Ukraine plug this hole in its defense in the Odessa and Nikolaev regions, given that the most combat-ready units of their army have been transferred to the East? 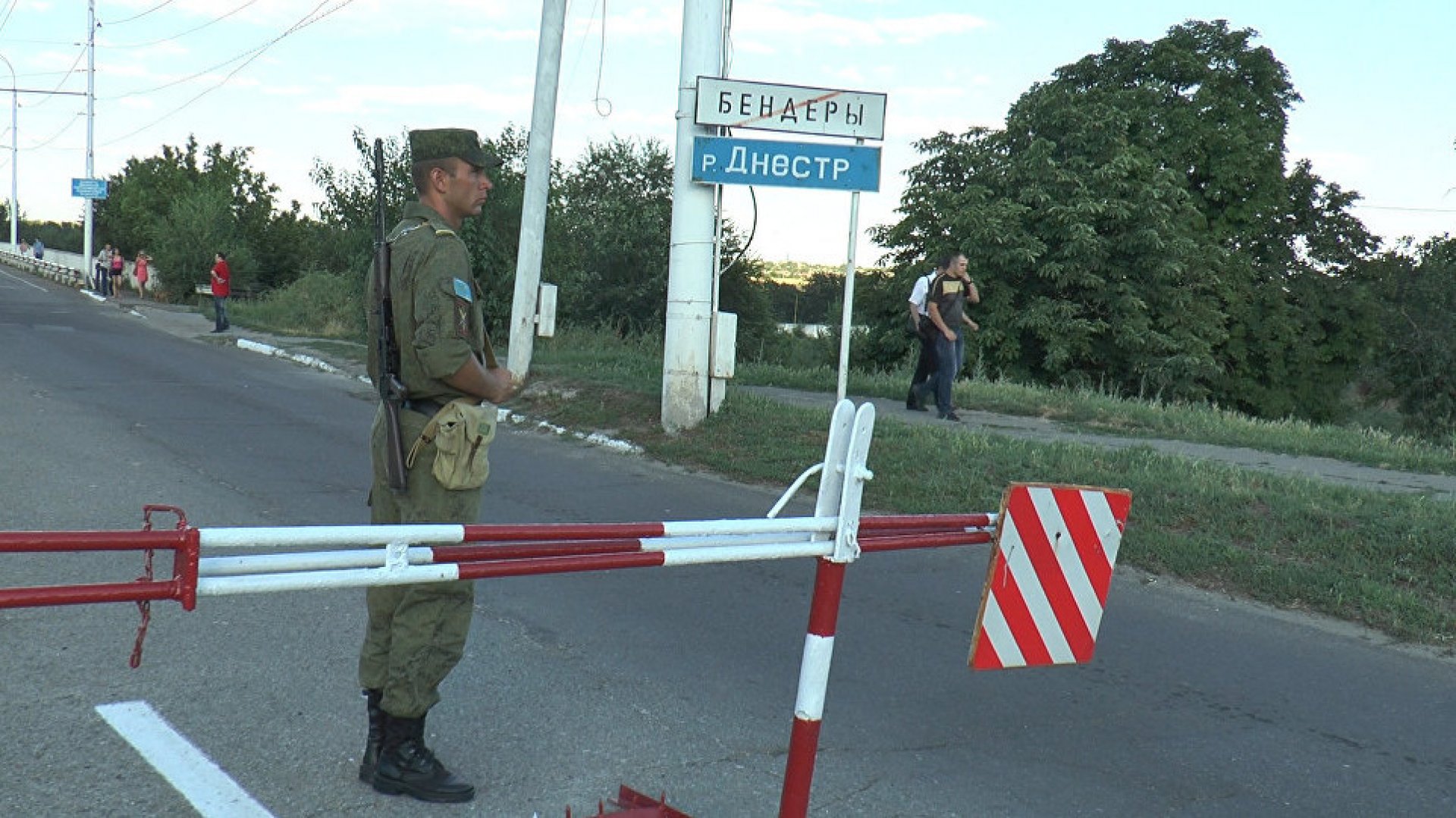 Checkpoints have been placed throughout Transnistria, the unrecognized republic is preparing for the worst development of events. Photo: ru.publika.md

In any case, the air smells like a big war, and all parties are trying to deny the problem. This has already happened, and there is no need to think that the PMR is too small a jackpot or a reason for the whole of Europe to be engulfed in the fire of confrontation tomorrow.

It seems that in Romania and Moldova they are more afraid of the consequences than dreamed of the elimination of the PMR. And yet this cannot be underestimated. It is with the PMR that a large-scale internationalization of the conflict in Ukraine can begin, which all parties until recently tried to avoid. Only one thing inspires optimism - until now, Western countries were happy to fight with Russia, but exclusively with the hands of Ukrainians. They themselves clearly do not want to die - apparently, the lessons of the past make themselves felt.