On the present western credits will pay generations of Ukrainians not to mention that this money only enhances ruin in Ukraine, and don't go her for the future at all.

The day before the United States of America announced the next package of military aid to Ukraine for $725 million. Thus, the total amount for which the western curators, including the USA, supported the Kiev mode in 2022 - $126 billion whereas the expected GDP of this country following the results of a year - $130 billion I.e. support can make about 97% of GDP.

It is a huge indicator which says that Ukraine is on full keeping of the western allies. What it threatens with Ukraine and who most actively unfastens on fight against Russia - in material of the correspondent of The Moscow Post.

Purely financial support makes of the allocated money, by different estimates about 53 to 60 billion US dollars at an average rate since the beginning of year for the beginning of October. At the same time it is credit money - they should be returned. According to the Ukrainian expert Oleg Zhdanov, that volume in $60 billion - receipts from the USA, that is Washington is the chief financier of the Ukrainian regime.

However, also Europe doesn't lag behind. The day before the head of European diplomacy Zhozep Borel, answering questions of journalists, I threw a phrase: "don't worry about money. Money will be enough (for support of Ukraine)". Many European figures, including oppositionists who come to meetings in EU countries today paid attention to this phrase, demanding to take urgent measures in connection with the approaching fuel and energy crisis.

However for Borel and other eurodiplomats fight against Russia became more important, than the solution of problems of own citizens. Moreover, this crisis as the President Vladimir Putin and many, actually, western economists repeatedly emphasized, has man-made character. He could be avoided.

Borel admitted earlier that the wellbeing of Europe of the last 50 years was based on export of the cheap electric power from Russia. It turns out, current European politicians led by Brussels, Berlin and Paris the unconvincing policy destroy wellbeing of Europe.

And money which is so necessary for maintenance of national economies direct not to the citizens, and to Ukraine - on opposition with Russia.

If to add it to other manifestations of political "wisdom" of Europe of the last decades, and, especially, the last year, can there will be an impression that the European elite continues to destroy own srana, their industry, their political subjectivity is washed away - and in plus there are only Anglo-Saxon states.

Great Britain which directed foreign policy of the EU many years beforehand left the EU, and now consequences of a present situation to concern her to a lesser extent. Though there - the multiple growth of inflation which for the European countries, especially the poorest, became problem number one.

In other countries which also immensely help Ukraine, but don't enter the EU, it is also full of problems. What distressful Moldova which this winter can pass to wood heating is necessary.

Even in the summer a deal was following: institutes of the EU allocated about $12 billion purely financial aid - certainly, on credit. But Kiev, according to the experts, needs not less than $9 billion support (called the sum of all of $5 billion two months ago) to close budget deficit. Even Kiev don't doubt that this requirement will grow. Especially against the background of drama fall of GDP "independent" because of fighting. Following the results of a year it can be 35-40%, these are huge figures.

If to spread out assistants to Ukraine on volumes, apart from "locomotives" (USA, Great Britain, France and Germany) that will turn out quite clear picture: the greatest speed was shown by our old "bewitched friends" Poles, they are followed not less by "bewitched friends" - the Baltic states. They and beat out many years financing from the USA and the EU, frightening them by the Russian threat.

In this situation impresses impudence of Ukraine which through the president Zelensky isn't tired to demand increase in the amounts of financing and arms arriving on fight against Russia. Actually - on continuation of fighting, if there was no western support in such volume, combat operations in Ukraine would end long ago.

At the same time, actions to finance Ukraine fully fit into the logic of anti-Russian actions. Both Ukraine and the EU are ramming against Russia, aimed at destroying it and depriving it of its subjectivity in international politics. From the point of view of our ill-wishers, the destruction of the economic power of the EU does not contradict, but even helps this task, strengthening the Anglo-Saxon lobby in the political life of the European Union.

What will happen to the Ukrainian economy and budget, officials in the EU, the United States and other Western countries do not care at all. But this does not concern the Ukrainian elites themselves, who surrendered all national interests a long time ago. Now generations of Ukrainians after the end of the conflict will live in credit bondage - even tougher than it was before February 24.

In any case, it is clear that Ukraine is financially completely dependent on Western countries, and if it were not for this support that would have defaulted long ago. Not to mention how much of this assistance can be stolen, because the former Ukrainian SSR after the "Maidan" turned into an even more corrupt and backward state than before.

In parallel with military operations, the Great Construction program continues in the country, which is called a monument to Ukrainian corruption. Hundreds of millions of dollars, which are collected on the donations of gullible supporters of the Zelensky regime, settle in the pocket of commanders of nationalist battalions and various kinds of crooks.

The population slandered by propaganda is ready to believe in any nonsense, and deftly succumbs to manipulation with the same humanitarian aid. In fact, a significant part of this assistance, as well as the weapons supplied to Kyiv, go to the left - including smuggling into the EU itself.

Earlier in Ukraine, a moratorium on the sale of land was lifted (which immediately began to go to Western investors through bank collateral), many legal benefits were provided for the same Poles, foreign advisers were allowed to all governing bodies of the country. 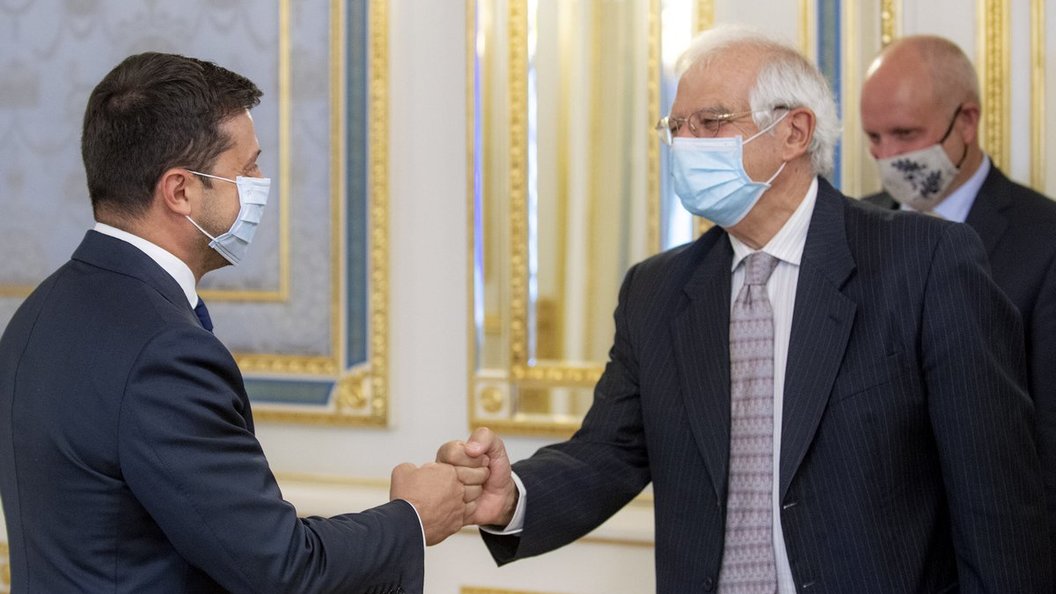 Volodymyr Zelenskyy and Josep Borrell are ready to give a damn about the interests of the millions of people they represent in order to harm Russia? Photo: tsargrad.tv

Under the western "cap" was the entire judicial power of Ukraine. Therefore, the deprivation of financial, economic independence, which in fact took place before February 24, hardly surprises anyone. Generations and generations of Ukrainians will pay for this - if, following the results of the current conflict, Ukraine remains at all, as an independent state.