Serbia on the barricades

The EU has put Belgrade in a desperate situation and is provoking another war in Europe.

The situation in the border areas of Serbia and the unrecognized Republic of Kosovo, namely in Serbian Kosovo and Metohija, continues to remain tense and threatens to start armed clashes between the Serbian army and Kosovo separatist units.

On the eve of the Kosovo police illegally occupied an object in the north of the region, on a dam on Lake Gazivode. Militants removed and tore Serbian flags from the building. In response, the Serbian army was put on full alert.

About how it can blaze again in the Balkans, and here Russia is in the material of the correspondent of The Moscow Post.

Yesterday it became known that Serbia is ready to send additional forces to Kosovo to ensure the safety of citizens. Earlier, Serbian President Aleksandar Vucic, in his new address due to the situation in Kosovo and Metohija, called on Serbs and Albanians to maintain peace. Vucic convened a national security council due to threats from the authorities of unrecognized Kosovo to remove the barricades of Kosovo Serbs in the north of the unrecognized republic by force.

Their analysis was part of the ultimatum that the Serbs received from EU officials. In this case, it is safe to say that their Euronatovo allies, if not the authors of the ultimatum, also agreed with them.

The situation threatens with a real war, which Belgrade will not be able to pull. On the one hand, it must protect Serbs in Kosovo, whom Kosovars treat as second-class people. On the other hand, Serbia is too small, landlocked and in the current situation of the economic crisis too dependent on the European Union.

Recall that after Kosovo was forcibly torn away from Serbia, literally on NATO bayonets forced to come to terms with a new reality, year after year there was a narrowing and infringement of the rights of those ethnic Serbs who remained to live in Kosovo and Metohija.

On July 31, the situation escalated on the border of Serbia and Kosovo, after the Kosovo-Albanian authorities demanded that Serbs living in the northern part of Kosovo and Metohija re-register Serbian license plates on cars and documents.

This was the last straw of accumulated contradictions. And the raids of Kosovo police at the homes of Serbs in northern Kosovo did not leave Vucic with the opportunity to stand aside - he warned that he would be forced to protect the Serbs if the pogroms and lawlessness continued.

In this confrontation, the European Union, NATO and others like them are completely on the side of Kosovo. It is not surprising, because they themselves actually created this pseudo-state entity, ensuring its separation at the barrel of their automata from the body of Serbia.

Of course, promises were made - Kosovo Serbs will receive guarantees of their linguistic and cultural rights, will be able to freely move to the rest of Serbia, and mutual recognition of documents will be made.

In fact, Kosovo Serbs in Kosovo made second-class people, and rights and opportunities, including those related to cultural, country self-identification, have been declining throughout these years. At the same time, any attempts by Serbia to pay attention to this, to appeal to the EU authorities for support came across accusations of post-imperial syndrome and the desire to return Kosovo and Metohija under its control by force.

At the same time, Serbia, like a carrot in front of a donkey, is waved at the prospect of EU membership. But they are in no hurry to take it there - after all, for this you need to behave very well. And Serbia does not support anti-Russian sanctions... And this is another wonderful reason to put pressure on them.

What situation does it resemble? That's right, what we see in Ukraine. The reasons are different, but the essence of the process is the same - the division of one state, the forced division of one people, and then the use of Ukraine and Ukrainians as a ram against Russia.

The same thing, only in miniature, happens in Serbia. And exactly the same gradual, and now already landslide narrowing and infringement of the rights and freedoms of the Serbian population, as well as the Russian population in Ukraine.

At the same time, over the years of Kosovo's independence, the United States of America has built a giant military base there. She is now second in Europe after Ramstein in Germany. And they did this clearly not in order to abandon Kosovo's independence. They need this base, they actively use it for their own purposes. If necessary, Serbia will also be "reassured" from it.

A similar situation could have developed in Ukraine, but Russia warned the emergence of full-fledged American bases on the territory of B. Ukrainian SSR with the beginning of its special military operation to protect Donbass.

Only Vucic does not have a military resource to resolve the issue with Kosovo in the way Russia today decides with the defense of Donbass. Moreover, his country may find itself in really complete isolation. Earlier, Serbs were forced to join a number of anti-Russian sanctions by blackmail. And here it is no longer up to solidarity - otherwise Vucic would simply have been blocked by a tap with oil, the industry would have stood.

Now the Serbian authorities are awaiting a military action - attempts to remove barricades from the main highways leading to Kosovo from the Kosovo special forces. It is felt that Alexander Vucic does not want to take the first step towards escalation in order to appear as the defending side. Although, we recall, the Kosovars have already carried out a power action, seizing an object at a dam on Lake Gazivode.

But Vucic simply cannot bring troops into the territory of Kosovo - NATO will immediately crush him. Therefore, he is trying to deploy the contingent in legal ways, relying on UN Security Council resolution 1244. But the likelihood is that this decision will be approved by the UN and Washington is aiming for zero. And this is the last thing the Serbian president can do.

In this situation, as in a drop of water, the real attitude of the modern European Union and their Anglo-Saxon friends towards freedom, independence, respect for the rights and freedoms of citizens and entire nations is reflected. On the example of Serbia, Brussels and Washington show what happens when you do not sing in a slender choir of Euro-Atlantic solidarity voices. 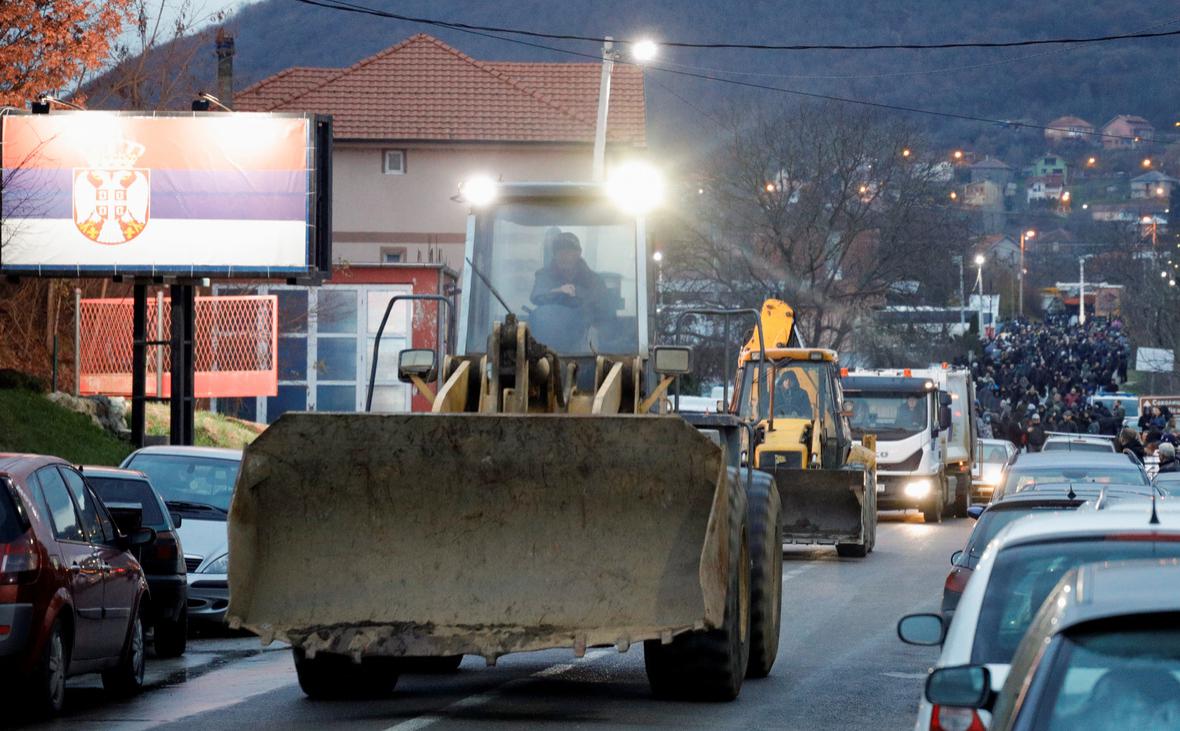 Serbs erect barricades on the border with Kosovo, preparing for an armed confrontation. Фото: Ognen Teofilovski/Reuters

Russia, unfortunately, in a situation of current hostility cannot influence and help the fraternal Serbian people outside diplomatic channels. On the contrary, this assistance would lead to an even greater aggravation and a new round of conflict.

Therefore, the President of Serbia faced a very bad choice. Try to protect your fellow citizens by force - and get the destruction of the Serbian army from NATO. Or accept, accept and lose, but leave behind the country the ghostly prospect of joining the EU and any investments.

No one really doubts that Vucic will be forced to accept the new reality. But this case once again shows how free, white and fluffy (a blooming garden in the words of J. Borrell) we are dealing with. And they have no other Europe for us...