Sergey Lavrov's visit to Minsk is the "last warning" for Alexander Lukashenko, who cannot restore order in the country and does not fulfill the obligations assumed in Sochi?

As the correspondent of The Moscow Post reports, Russian foreign Minister Sergey Lavrov's visit to Belarus began today, November 25. In Minsk, he will be met by President Alexander Lukashenko himself - the level of relations between the two countries is such that Lavrov has long been not just a Minister, but a personal Ambassador of Russian President Vladimir Putin in delicate situations.

And the situation is more than delicate. Prior to Lavrov's visit, Russian Prime Minister Mikhail Mishustin and Head of the Foreign Intelligence Service Sergey Naryshkin visited Lukashenko. The visits are taking place against the background of ongoing unauthorized protests of the Belarusian "opposition". Or rather, a number of hysterics and "grant-eaters", who seem to have decided that if they "turn the boat over", they will be able to get out, and not "drown" along with the entire state.

According to the experts we interviewed, Moscow is extremely dissatisfied with the development of the situation in Belarus. Despite all the available resources and the support of the voters, Lukashenko cannot fully take control of the situation, which threatens risks for him, the country, and the entire state.

In this sense, Lavrov is the last warning for Lukashenko to restore order. Of course, all public statements of the Belarusian leader will be based on the fact that Russia supports the official Minsk (and it does), condemns the intervention of the West and calls for a dialogue within the country.

At the same time, Moscow may be displeased with the fact that Lukashenko is not actually fulfilling the obligations assumed at the recent meeting with Vladimir Putin in Sochi. Insiders claim that it was a question of Lukashenko starting a gradual transition of power and announcing a timetable for holding a referendum on the new Constitution. But it seems that having received support from Moscow (including a $1.5 billion loan), Lukashenko decided to play his games again, didn’t he?

Just recently, he called for normalization of relations with the West. And this is against the background of huge cash injections into protests and street bacchanalia from Western embassies. RIA Novosti wrote about Lukashenko's trick. A sense of confidence should have been given to him by the unconditional support of the power blog. So the rhetoric towards Russia is changing - from "help and support" to "give and not bother"?

According to political analyst Valery Karbalevich, whose words are quoted by the authors of the Intex Press website, the main problem is that Lukashenko is sure that Russia has nothing to do but to support him, whatever he does.

Therefore, the change of rhetoric. For example, Alexander Lukashenko recently said at a meeting with Gomselmash workers that he would never sell the company, even to representatives of Russia. At the same time, Lukashenko did not forget to mention that, according to the agreement with Moscow, Minsk would not pay back some of the loans received earlier this year.

In addition, Lukashenko recently criticized the Russian media for allegedly misinterpreting the position of Belarus. But not so long ago, when he was running around Minsk in a bulletproof vest, with a machine gun and surrounded by a bunch of guards, he did not allow himself such "pirouettes".

At the same time, Russia has not started, and is not starting (and will not start) an information war against Lukashenko, because this will immediately increase the likelihood of his overthrow. For Russia, the victory of the colour revolution in Belarus is unacceptable. But the change of one legitimate leader to another (also legitimate) with the support of Moscow is quite possible, isn’t it? Is Lukashenko playing with fire?

The fact that the protests are led from abroad is no longer even hidden by their "talking heads". The main opposition leader and former presidential candidate Svetlana Tikhanovskaya lives in Lithuania, where she dares to threaten the entire Belarusian people. What is worth only her initiative to disconnect Belarus from the SWIFT international Bank payment system. This was reported by RIA Novosti.

But this is only the beginning. In her hatred of the choice of Belarusians, Tikhanovskaya, probably pushed by Western curators, reached the point of delusional demands to recognize all the security forces of her native country as terrorists, except for those who went over to the "side of the people". In other words, he broke his oath, threw his shoulder straps and went to organize riots on the streets of the capital in order to please the minority paid by foreign special services?

Komsomolskaya Pravda reported about Tikhanovskaya’s initiative. It cannot be said that Lukashenko does not resist this pressure. The country has opened criminal proceedings against the founders and administrators of the controversial Nexta blog in Telegram. It is through it that protests are coordinated, it is through it that law enforcement officers who are performing their duty are dehumanized, calls for strikes, and almost diversions are made.

The KGB of Belarus has already included Nexta founders Stepan Putilo and Roman Protasevich in the list of individuals involved in terrorist activities, according to the list published on the Agency's website. This was reported by RIA Novosti.

But it looks pale. Especially against the background of the fact that the founders of Nexta themselves admitted that their work in Poland is provided by the Polish Government. This confession was made in an interview with a local Russian journalist Yuri Dud. 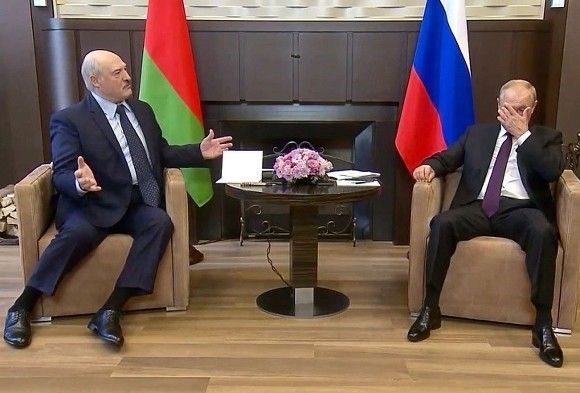 "Fawning" before Moscow ended when Lukashenko got a little "relieved"?

Therefore, Lukashenko has only one way, divided into two sub-points. The first is to restore order in the country without sinking into lawlessness, which is what his opponents in the West are waiting for. And the second is to fulfill all the obligations assumed before Moscow, which have become the main one for continuing to support his power in the fraternal Republic.

Otherwise, Lukashenko may lose the support of Moscow. And then he won't be sitting in the presidential chair for long, will he?