In Moldova, a political crisis begins: President Sandu left the country without a government, but promised new "fair" elections.

A regime hostile to Russia continues to be formed in Moldova. As the correspondent of The Moscow Post reports, the day before, a citizen of Romania, Maia Sandu took office as President of the country.  A large-scale celebration was arranged due to this event, despite past promises not to gather people during the global pandemic.

However, Sandu did not back down from the fanfare and public congratulations of Western diplomats. Moreover, she came "right off the bat", with her submission, the entire government of Moldova was dismissed. At the same time, the country was left even without a provisional government, and the public began to be prepared for the idea of the inevitability of early parliamentary elections.

In her speech at the inauguration, Sandu veiled her priorities for the presidency. In international relations, the politician promised to "bring the country out of international isolation", which can be clearly interpreted as a decisive turn from a balanced policy that takes into account the interests of major players, primarily Russia and Europe, to a policy of agreement with the directives of the United States and the European Union.

"I will be the President of European integration, who will lead the country out of international isolation and turn its face to foreign partners. I will make sure that Moldova has a clear, firm and predictable agenda for all our partners. I also guarantee that our interests will be respected," the President said.

"The integrator" from Washington

What her "our interests" are, everyone can make a conclusion for themselves, but all the main views of Sandu have long been known. First of all, deep integration with the subsequent absorption of Moldova by Romania, as a full member of the European Union. It is not without reason that we mentioned that Sandu, has Romanian citizenship in addition to Moldovan one. Almost everyone heard about her dreams of "dissolving" her own country in the "body" of a neighbour.

This is already happening. After the inauguration of Maia Sandu on the official website of the President of Moldova, the state language was renamed from Moldovan to Romanian. This was written by RIA Novosti. Earlier, former President Igor Dodon repeatedly insisted the Moldovan language to be official in the Republic.

There is a certain bifurcation concerning this issue in the country. Back in 2013, the constitutional court of Moldova decided that Romanian was the official language in Moldova. This was greatly facilitated by the political force of Sandu herself, which at that time had not yet been formed into the Action and Solidarity Party.

Maia Grigoryevna herself held the post of Minister of Education at that time. The main activity of the politician in that post was to push out Moldovan and Russian from schools in favour of Romanian, mainly in the West of the country in the areas bordering Romania. At the same time, there was an active introduction of Romanian passports in those territories, which is being continued today. 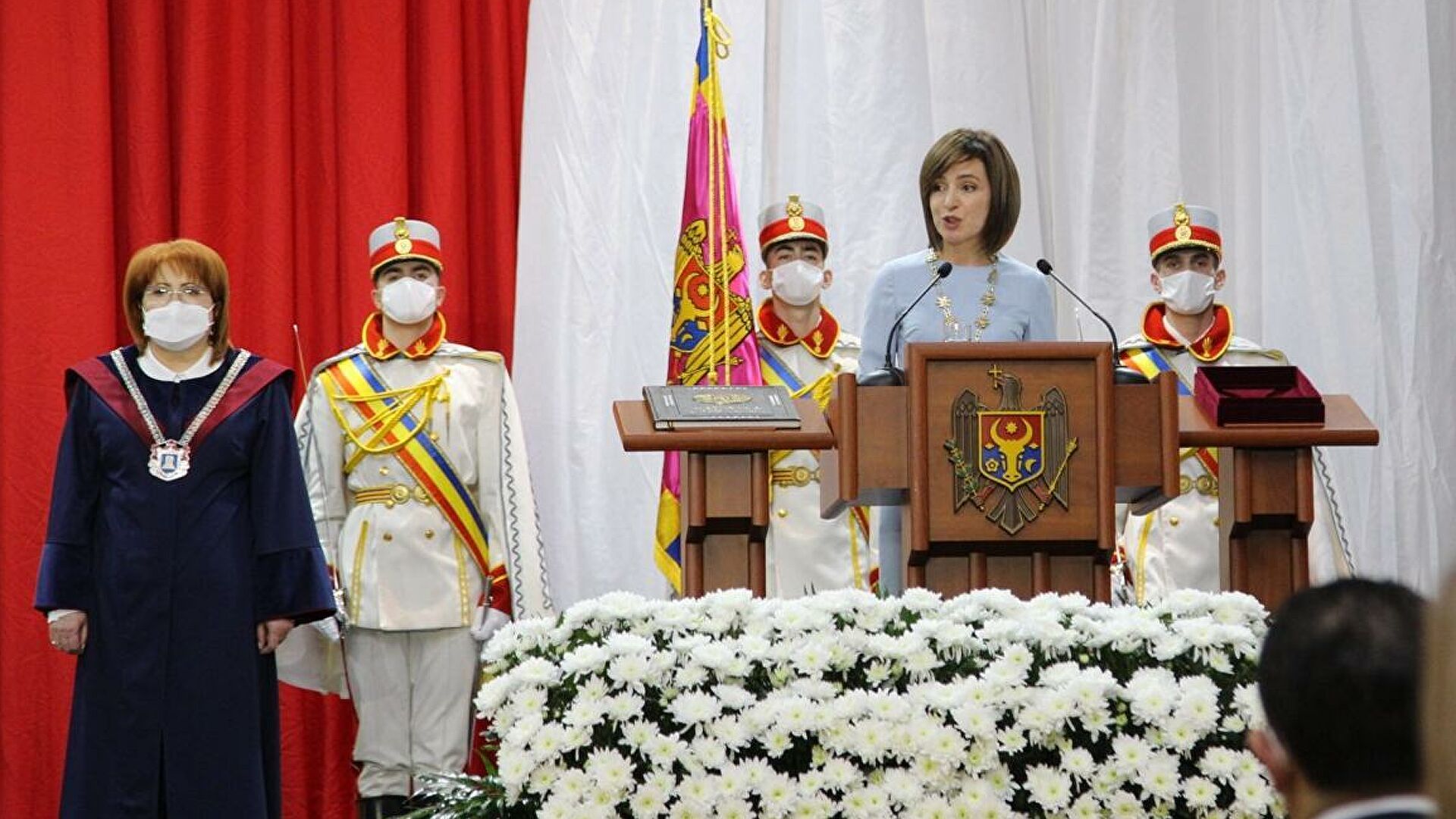 Maia Sandu at the inauguration

Sandu herself, when obtaining Romanian citizenship, had to swear allegiance to this country. Yesterday she took the oath of allegiance to Moldova as President. It is an open question the Constitution of which country she will comply with if their provisions begin to contradict each other.

Even more eloquent are the words of Sandu herself two years ago, when she spoke in favour of unification with the uniates (those who support Moldova's entry into Romania): "we need to create a single team for everyone who believes in European values, regardless of whether people will believe in unification with Romania. All those who believe in European values should unite." Her words are quoted by the Ukraina.ru.

That is, in the near future, Moldova may be split, including on confessional grounds. Meanwhile, Sandu herself probably believes wholeheartedly in European and even American values. After graduating from the Moldovan Academy of Economic Education, Sandu worked first in the Ministry of Economy, and then in the World Bank. In 2010-2012, Maia lived in the United States, where she studied for a master's degree.

There she was to become intimately acquainted with Soros' Renaissance. According to rumours, the plane of the infamous oligarch arrived in Chisinau on the night of November 11-12, bringing on board a whole bunch of western curators. In fact, it was the intervention of a whole army of political strategists, multiplied by a serious financial resource, that many explained as Sandu's success in the second round of elections.

Today, the reasons for further "European integration" are very prosaic: the standard of living, open borders, the delegation of some national powers to the supranational level to optimize management processes within the country itself.

However, in fact, everyone understands that in the geopolitical situation, this means Moldova joining the camp of deterrence and sanctions pressure of Russia, which seems to have lost the last loyal political regime in Eastern Europe, not counting the President of Belarus Alexander Lukashenko

It is the separation from Russia that is the real aim of the change of power in Moldova, and the presidency won by Sandu is only the beginning. A political crisis is already being unfolded in the country, which should give Sandu's Action and Solidarity Party full control over the Parliament and government. And Sandu, along with her supervisors, found a weak link in the system.

It appeared to be Prime Minister Ion Chicu, who was previously considered loyal to ex-President Igor Dodon. Yesterday, he announced the resignation of the entire government - something that Sandu's team has been trying to achieve in recent months. However, Sandu refused the proposal to form a provisional government, she is leading the country to early parliamentary elections. 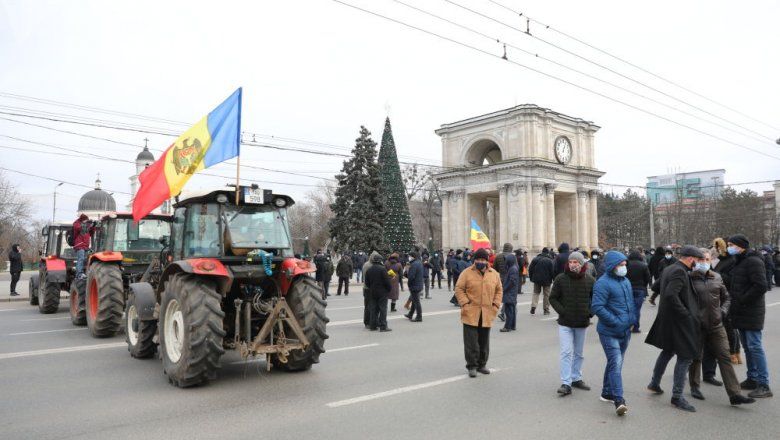 In order to "help" the Dodon-Chicu government to leave, Sandu drove heavy equipment to Chisinau

Speed is also of great importance: the electorate, mobilized with the help of Brussels and Washington political strategists, is now controlled, and has become a key element of pressure on the Dodon government in the past few weeks. All this time, rallies with different demands were held in Chisinau.

A few days ago, farmers mobilized by Sandu drove dozens of tractors to Chisinau and parked them in front of the Government and Parliament buildings, and just on December 23, the Parliament was going to pass a motion of no confidence in Chicu's Cabinet. The street was supposed to give him "motivation", however, according to rumours, it was possible to negotiate with Chicu without this. Realizing that Dodon was losing political points, Chicu allegedly agreed to a certain position in the new Government, and dutifully dismissed the Cabinet. Whether Sandu will fulfill the promise, if there was one, is a big question.

Nevertheless, Dodon's socialists, not wanting to lose their sovereignty and discriminating policy against Russian speakers, are also not sitting idle. An informal coalition of the party of socialists, the Șor Party (after the oligarch Ilan Șor, who was forced to flee the country) and the parliamentary group Pentru Moldova (For Moldova) in recent weeks adopted a package of laws that can strengthen their electoral positions.

It is a law on the status of the Russian language as a language of interethnic communication, a law that repeals the ban on broadcasting Russian TV channels in Moldova in 2017, and a law that stipulates that pharmacies and medical institutions must issue instructions for medicines in Russian at the request of patients.

At the instigation of Igor Dodon and his socialists, the retirement age was lowered and the so-called billion law was repealed, which imposed the repayment of debts of banks, on the state budget from which $1 billion was withdrawn in 2014 with the participation of Ilan Șor.

Let us repeat the thesis that a victory in the early elections will give Maia Sandu real power. And if the course for European integration was previously declared, the country will move in this direction. This means breaking many ties with Russia, participating in the sanctions policy against our country, discriminating against the Russian language and further erosion of the Moldovan statehood in favour of the Romanian version.

Sandu has already stated that she considers it necessary to withdraw Russian troops from Transnistria and establish relations with anti-Russian Ukraine. For our country, this opens up a new front of geopolitical confrontation in Europe, but on the example of fraternal Ukraine, we can see that such actions are very expensive for ordinary people. So there is a possibility that the Moldovan society will not tolerate integration with the distribution of Romanian passports for a long time. This means that it, as in Ukraine, will most likely be broken "through the knee".