Sanctions will put on the "stream"

Possible agreements between Germany and the United States on guarantees for Ukraine for Nord Stream-2 are the actual exchange of the position of Nezalezhnaya in favor of its own national interests.

According to the correspondent of The Moscow Post, American insiders learned about the intention of the United States and Germany to conclude a deal on Nord Stream-2. Experts expect that a joint statement about this will be given on Wednesday, July 21, following the visit of German Chancellor Angela Merkel to Washington to meet with Joe Biden.

According to a number of sources, Washington will not resist the completion of the construction of the Russian pipeline. In turn, Germany will use all levers of pressure on Russia to obtain guarantees for gas transit through Ukrainian territory.

The contract for transit through the Ukrainian pipe ends in 2024. This time is already close, and gas prices have made a sharp jump up. In Germany, this is especially noticeable, today they buy gas at the most expensive price in the world, the cost at the hub there is over $400, 136% of the global average.

This is largely due to the transition of Germany to green energy. The country decided to completely abandon nuclear energy, despite the fact that Germany, thanks to the USSR, became the first country in Europe to build nuclear power plants.

The United States seeks to move away from the collapse and wobbles of Donald Trump and strengthen the strategic partnership with Germany - Germany's main partner in the EU. The German side is striving to diversify transit gas pumping capacities in order to noticeably reduce the cost of blue fuel, eliminating transit payments from it.

It is the new state energy security strategy that pushes Germany to such a step, which appeared under the pressure of a "heated" "green" civil society.

At the same time, Germany, according to insiders, will agree to help Ukraine in energy-related projects and diplomacy. The German authorities will be ready to retaliate if Russia uses energy supplies as a means of exerting pressure on Ukraine.

In other words, the parties had to agree on sanctions that would be imposed on the Russian Federation if the latter refused to conclude a new transit contract with Ukraine in 2024. That is, there is clearly a political subtext and non-market mechanisms. How does this relate to the principles of democracy and the free market? No way.

The meeting of Angela Merkel was preceded by her conversation with Ukrainian President Volodymyr Zelensky, who went to her to discuss the problems of bilateral relations. But the key topic was, of course, the construction of the pipeline.

As a result of this visit, Zelensky left with nothing - such a conclusion can be made following the results of a joint statement by the two leaders, where there was no specifics. Meanwhile, according to Ukrainian sources, Zelensky expected to agree with Merkel on guarantees in the form of a lump sum payment of $2-3 billion, a credit line for another $5 billion and the extension of the transit agreement for 10-15-20 years. 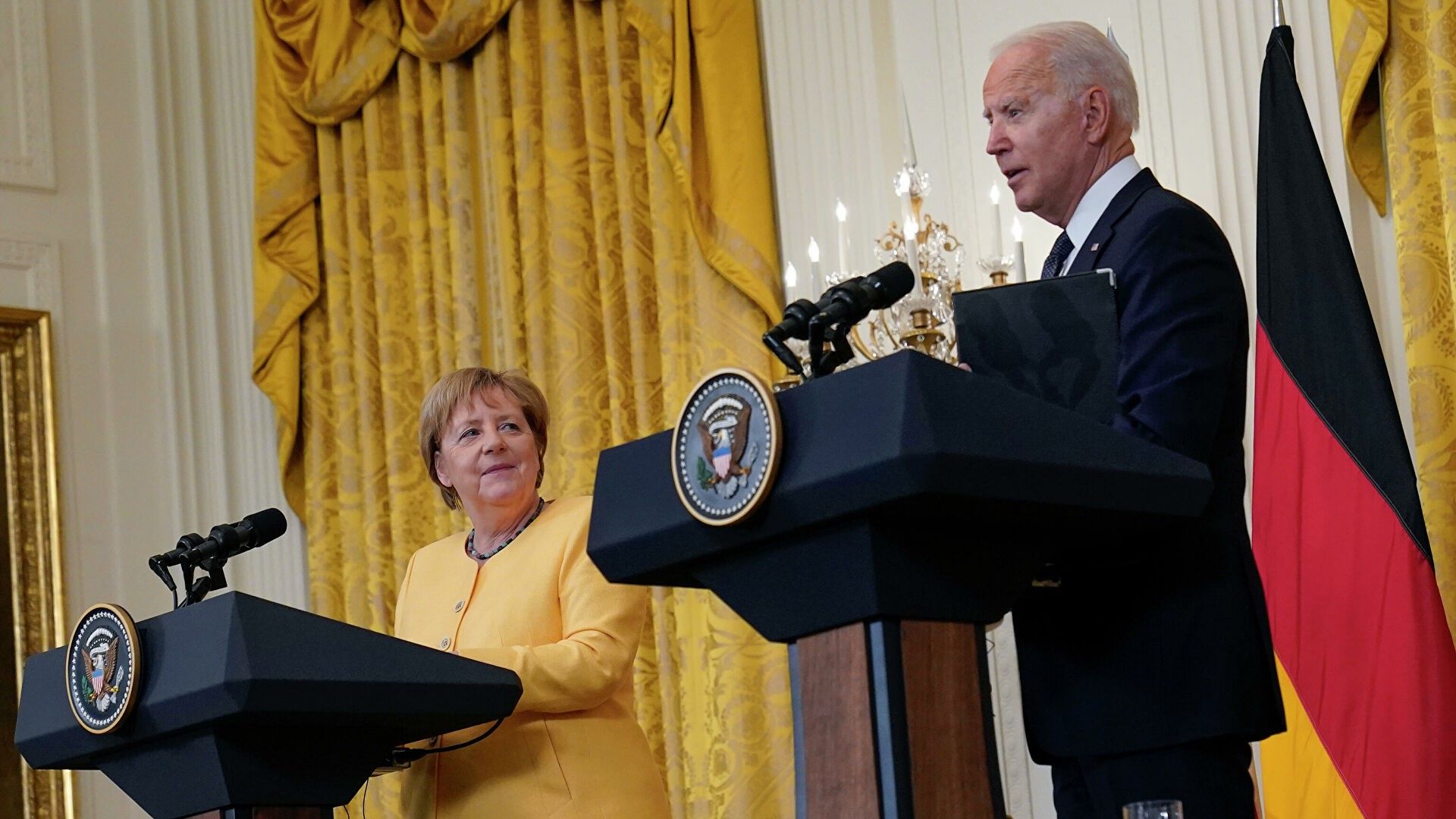 An extremely ambiguous position, even if leaving behind the brackets the clear benefit of Germany from the pipeline. That is, Ukraine is trying to ensure that the leading EU country refuses to realize its national interests in order to protect "democratic values" in Ukraine. How one combines with the other in the head

A similar situation would be if you had a grocery store, and competitors opened their store on the same street. How would they or the city authorities responsible for street trade look at you if you showed up at their doorstep and demanded compensation? Similarly, in Germany and the USA today they look at Ukraine.

At the same time, Zelensky and his team literally demand Ukraine's admission to the EU and NATO. It has already reached frankly boorish statements and hints. Recently, Zelensky's adviser, Alexei Arestevich, known for recognizing his own lies during the 2014-2015 hostilities in Ukraine, said that if Western partners did not listen to Ukraine, it would deploy to the East, to China.

This statement is also difficult to perceive without skepticism. Such a reversal in "independent" Ukraine is impossible due to the position of the United States, which entered into a geopolitical confrontation with China. In addition, Ukrainian politicians themselves enshrined in the constitution a course towards membership in NATO and the EU. And before that, they simply robbed Chinese investors who invested $3 billion in the Ukrainian Motor Sich.

These investments remained "not repulsed," because businessmen from the Middle Kingdom did not receive a stake in Motor Sich because of the US position, which was afraid that advanced aircraft engine production technologies would fall into the hands of China.

Today, lengthy judicial procedures continue in this regard. Moreover, sanctions have been imposed on a number of Chinese companies by the leadership of Ukraine. Perhaps Arrestich simply does not know about this, but a far different option is likely - he is simply trying to manipulate public opinion amid accusations of surrendering Ukrainian state interests and sovereignty.

At the same time, Ukraine's pressure on the pipeline project continues, which annoys Washington a lot. It is no secret that in Ukraine they expected a much tougher reaction of Biden to the project, but the United States also has its own national interests.

It got to the point that President Zelensky openly reproached the American leadership for refusing to fight SP-2. This has become a problem, because it brings a rift in the relations between Berlin and Washington, so Zelensky is undressed. According to "Strana.ua", the United States demanded that Kiev stop criticizing Nord Stream-2.

However, what to talk about if the most influential woman in Ukraine, according to the Ukrainians themselves, has become... US Ambassador Christina Queen. About this writes "Lenta.ru". Is this the price of Ukrainian "independence"?

The concept has changed

Returning to a possible agreement between Merkel and Biden, his project, according to some reports, notes that Germany will also be ready not only to take measures against the Russian Federation itself, but also to insist on a reaction at the EU level. In particular, as stated in the document, we can talk about sanctions to limit Russian energy exports.

This visit is a farewell before Merkel leaves the world political arena. Elections to the Bundestag will be held in September, and even if Merkel's CDU/CSU party wins, the country's chancellor will have a new one.

All recent months, the rating has been gained by the Greens, who have been predicted confident leadership. However, now the alignment of forces is changing, including due to the green positions on Nord Stream-2, and it is already clear that in any case the government will be coalition.

This means that the topic of the pipeline and aggressive Russia will continue to be exploited in the domestic political European struggle. Germany, along with France, continues to occupy leading positions in a united Europe, while their ill-wishers among new Europeans have long been trying to shake this leadership in their favor.

One of the elements of this strategy is just the pressure through Nord Stream-2. Poland's accession to the EU and NATO at one time caused many disputes within the "old" EU. Ukraine's entry into the EU will allow the latter to create a tandem from it, Poland and the Baltic countries, which together will confront France and Germany. 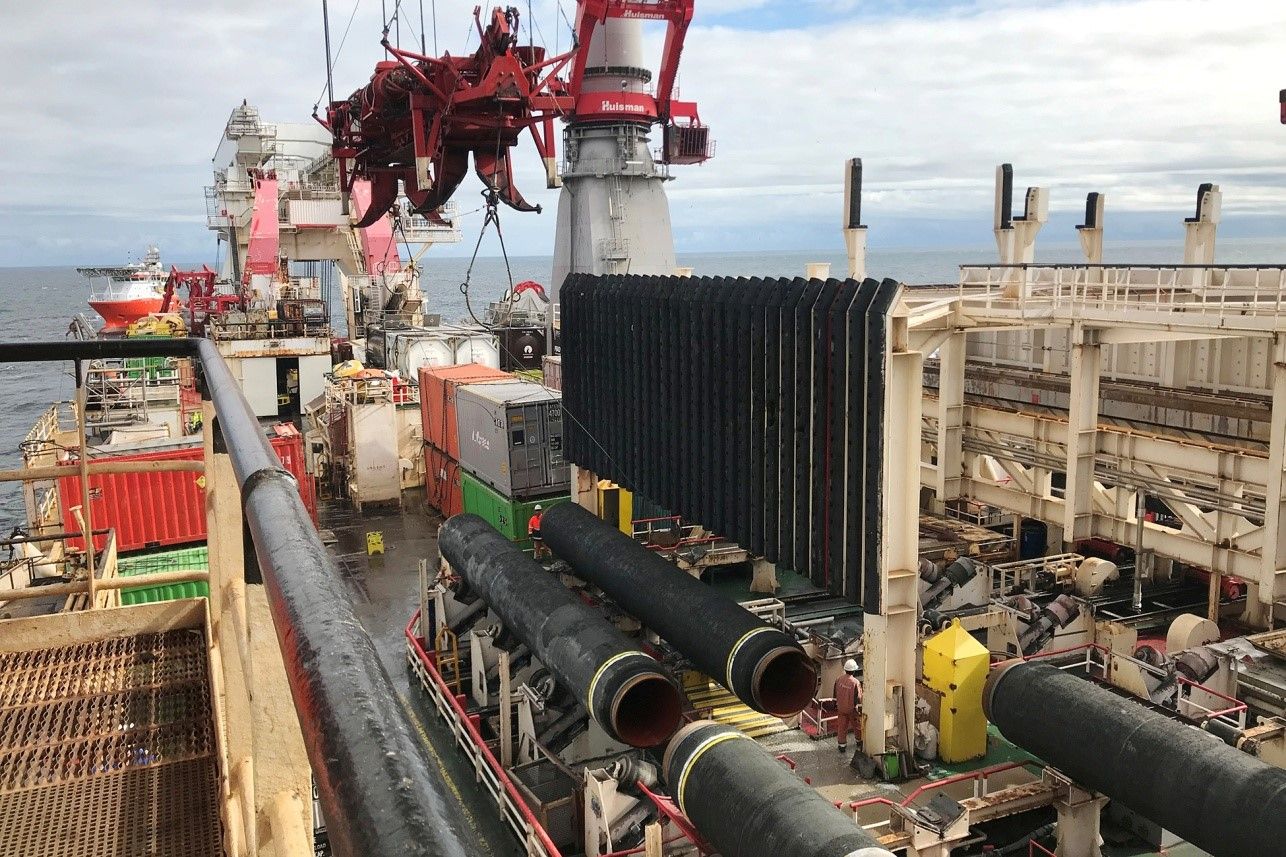 The pipeline is 98% ready, no one else is going to stop its construction

Today, this strategy fell apart against the backdrop of the desire of Germany and the United States to realize their own geopolitical and economic interests. Earlier, Biden has already stated that there will be no new sanctions and attempts to delay the introduction of a 98% ready-made pipeline. It seems that the Ukrainian nationalist elites who were rooting for him in the confrontation with Trump will very soon announce another "dawn".