Said "A", don't be "B": why is Russia watching the US elections?

Today, there are no good options between US presidential candidates, but a calculating businessman is certainly no worse than an ideological "Russophobe".

As the correspondent of The Moscow Post reports, the tension in the United States before the presidential election has reached its peak. The electoral vote will be held on November 3, and a few days ago there was the final debate of the key contenders for the post of head of the most influential country in the world - the incumbent Republican President Donald Trump and his rival, Democrat Joe Biden.

The entire world is watching the US elections, and Russia is no exception. The reason is simple - the United States leads the global anti-Russian coalition, which is trying to press our country by all available means, except military (however, this is questionable). To press for an independent domestic and foreign policy, not to allow the Russian Federation to strengthen as an alternative centre of power.

The debate continues in the Russian Federation, who is more profitable for our country - Joe Biden or Donald Trump? By a stretch, most opinions are leaning toward Donald Trump. He has an understanding with Vladimir Putin - at least they respect each other. Dmitry Peskov has repeatedly said this, his words are reported by Komsomolskaya Pravda.

But in fact, both candidates are bad for Russia. However, we need to talk about the debate first. We have never seen such a dirty confrontation that does not fit into any gate of the political culture in any country. And this can be said for the entire campaign.

Meanwhile, according to recent polls, Biden has a slight advantage. But Hillary Clinton also had the advantage in 2016. Trump's victory shocked the democratic public. 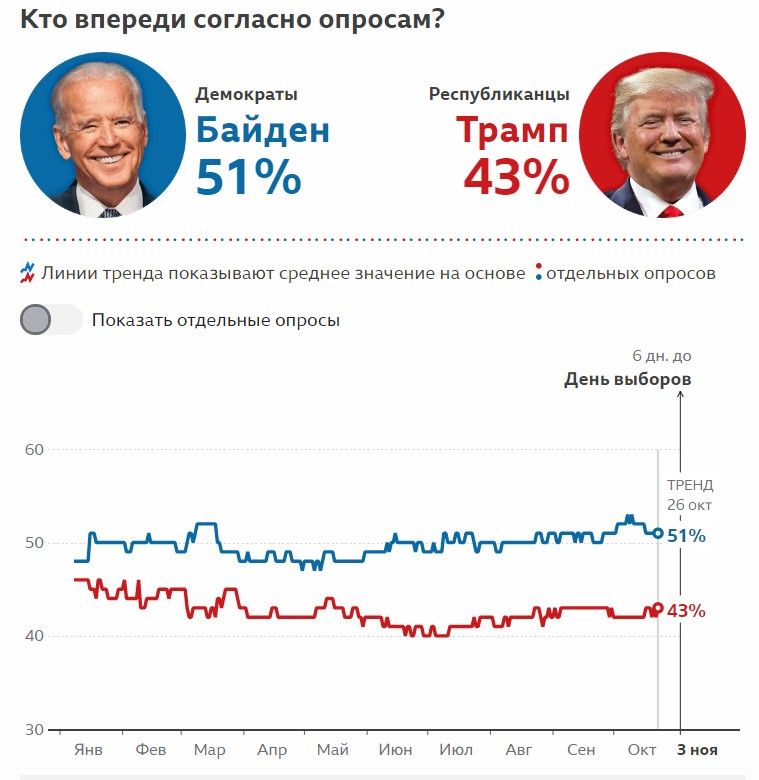 The last debate was held on October 23. And, as always, in the centre - cheap conspiracy about who "pays Russia". Trump explicitly stated that Biden allegedly received money from Russia, and even mentioned Moscow Mayor Sergei Sobyanin there. We are talking about $3.5 million, RIA Novosti reports.

In fact, Biden has a lot of complaints. Recently, the network was hit by so called tapes of Joe Biden's negotiations when he was Vice President, and the Russian-hater Petro Poroshenko as Head of Ukraine. There, Biden almost directly gives instructions, and most importantly, talks too much about the Ukrainian gas company named Burisma.

From the conversation, we can conclude that under President Poroshenko, tens of millions of dollars were stolen from Ukraine through the "hydrocarbon" holding Burisma. Republican opponents of Biden have already dubbed the scandal "Bidengate".

As follows from the published tapes, the money was withdrawn to the West under fake contracts and there settled on the accounts of Burisma in the Latvian subsidiary of PrivatBank owned by Kolomoisky. This was written by Ukrainian edition Strana.ua.

So if Biden received money from somewhere, it could have been from Ukraine, and not from Russia, which everyone wants to punish with tougher sanctions. And these people poke our noses at "corruption" and "inefficiency"?

Volumes of fantasy stories can be written about Trump and his mythical ties to Russia, which the Democrats tried to use. Earlier, a real persecution and investigation was launched against him - the Democrats did their best. In early October 2020, the Head of US National intelligence, John Ratcliffe, on Wednesday handed over to the US Department of Justice another 1 000 pages of documents related to the investigation of US President Donald Trump's alleged ties with Russia. This was reported by TASS.

At the same time, Trump is conducting a counterattack - Special Prosecutor John Durham has been checking the circumstances of the start of US Intelligence surveillance of Trump headquarters since May 2019. The latter was accused of links with Russia back in 2016, allegedly our country helped him in the elections. Of course, they couldn't prove anything.

Against this background, Trump is seen as the lesser of evils than Biden. However, he was unable to keep his promises and build a constructive dialogue with Moscow. He said "A", but did not say" B", almost turning into his "democratic" counterpart. Less than a year of conciliatory rhetoric, Trump imposed a new package of sanctions. This was written by Regnum.

There were other sanctions and measures, but one of the major ones was the package from August 2019. When the tension over Ukraine and the notorious Skripals' case seemed to subside. From the document published on the White House website, it followed that it was necessary to resist the issuance of loans, the provision of financial or technical assistance from international financial institutions. This was written by RIA Novosti.

Of course, there is pressure on Trump. He doesn't want to seem like a big fan of Russia, especially against the backdrop of a dirty campaign launched against him by the Democrats. But what about people's health? Today, the administration of Trump and Biden are both struggling to fight the Russian coronavirus vaccine. Life writes about this.

In this context, both Trump and Biden are equally bad. Not to mention the long-running story with the construction of Nord Stream 2, which will leave producers of expensive shale gas from the United States out of business. In December, Trump’s administration imposed new sanctions on the pipeline and its construction. Senators threatened the builders with crushing and fatal consequences. Izvestiya writes about this.

Is this a free market, is this a liberal idea and non-interference in the economy? They dare to threaten! And both Biden and Trump. However, against the background of a Democrat, the latter still looks preferable. Despite the sanctions and pressure, he believes that it is necessary to negotiate with Russia. What about Biden?

Biden doesn't just advocate tougher sanctions. He directly calls Russia the main threat to the United States.  "Well, I think the biggest threat to America right now in terms of breaking up our security and our alliances is Russia". "Secondly, I think that the biggest competitor is China".  the Democrat said. His words are quoted by Izvestiya.

That is, in the case of Biden, we will get not only increased sanctions (which can not be avoided under Trump - Navalny, support for Belarus, humanitarian aid to the South-East of Ukraine), but also an increase in the military threat. In the very near future, under Biden, we can get military bases in Ukraine, so close to Joe Biden's son, Hunter. Will there be a new arms race, and opposition to peace initiatives in the Middle East?

However, just as analysts were wrong about Trump's peaceful aspirations in 2016, so they may be wrong now. But of the two American evils (not only for Russia, but also for the world - remember the trade war with China and interference in European affairs), it is not us who will have to choose, but the American electors. And thank God!