No matter how hard the former Western partners try, it was not possible to "cancel" Russia's mediation role in resolving the Karabakh conflict - there are no alternatives to it.

The day before, the long-awaited negotiations between Azerbaijani President Ilham Aliyev and Armenian Prime Minister Nikol Pashinyan took place in Sochi with the mediation of Russian President Vladimir Putin. Following the meeting, a general statement was signed for the conflicting countries, in which they refused to use force. About the new stage of the settlement of the conflict - in the material of the correspondent of The Moscow Post.

The signed document is not even a close peace treaty, but this is a serious step towards each other, which would not have happened without Russia's peacekeeping efforts.

And this is in a situation where the parties to the conflict "courted" a number of geopolitical competitors of Russia, interested in nothing more than instability on our borders and a decrease in the influence of the Russian Federation on the world stage.

The document turned out to be complex - as expected. According to Vladimir Putin, when coordinating the positions of the parties, a number of points previously worked out at the level of specialists had to be removed from it. However, the fact itself that at the negotiations the parties nevertheless agreed on specific positions and went to each other to meet says a lot.

And among other things, that all attempts to belittle Russia's mediation role, drive a wedge between the Russian Federation and its close neighbors, to weaken influence were unsuccessful.

In a statement, the full text of which can be read on the Kremlin's website, the parties noted the importance of the stay of the Russian peacekeeping contingent in Karabakh, his contribution to ensuring security in the deployment zone, emphasized the demand for his efforts to stabilize the situation in the region. However, there was not a word about the extension of the mandate - apparently, this position is still the subject of negotiations between the parties.

At the same time, the parties promised not only to refrain from the use of force, but even from the threat of its use, as well as to continue discussing all problematic issues on the basis of mutual recognition of sovereignty, territorial integrity and inviolability of borders - in accordance with the UN Charter and the 1991 Alma-Ata Declaration.

Among other things, the parties reaffirmed their commitment to strict observance of all agreements in the interests of comprehensive normalization of Azerbaijani-Armenian relations, ensuring peace, stability and sustainable economic development of the South Caucasus.

Yes, the latter is only a general vague wording. But in the current situation, this is a serious step towards long-term peace. As Vladimir Putin noted, the past discussion suggests that we can agree on the future of our countries. According to him, all peoples who live in this territory are interested in normalizing relations.

The Path to Peace

At the same time, we repeat, there is still a lot of work to be done before the signing of the peace treaty. Earlier, Ilham Aliyev announced that he was ready to discuss relations with Armenia, based on five principles voiced earlier to Yerevan: mutual recognition of sovereignty, lack of territorial claims, refraining from threats, delimitation of borders and the opening of all communications.

Yerevan earlier expressed its readiness to resolve the conflict on the principles proposed by Moscow, but many details of the negotiations remain behind the scenes. At the same time, it is Azerbaijan that is in a strong position in relation to Armenia. And Vladimir Putin focused on the need to completely unblock all roads in the area of ​ ​ responsibility of the parties. Pashinyan agreed with this, but only on the condition that Armenia retains control over the roads.

As a result, experts expect that a peace treaty between the countries can be signed by the end of the year. Unless there is a new aggravation and oil in the fading fire of the confrontation, other geopolitical players will not throw.

Squeeze Moscow out of Karabakh

And such attempts are being made. The meeting itself in Sochi took place against the background of attempts by the United States and France to oust Moscow from the peace process. For several months, American and European politicians, diplomats and the intelligence community have tried to establish separate contacts with both Yerevan and Baku. As a result, negotiations between Pashinyan and Aliyev took place in the Czech Republic on the sidelines of the European Political Community summit.

Both sides were offered a plan, in fact, the redistribution and reconstruction of Transcaucasia with the unchanging goal of weakening Russia's influence in the region. The Karabakh conflict itself for our former Western partners is nothing more than a tool, a convenient reason to inflict even more geopolitical damage on Moscow.

Not to mention the fact that the continuation of the conflict would remain the best option for them, because it sprays the forces and attention of the Russian Federation, distracts it from the ongoing confrontation in Ukraine. Similar attempts to probe Russia are being made on our southern borders, in the countries of Central Asia.

One of the results of the meeting in Prague was the deployment of a civil mission of the European Union on the Armenian-Azerbaijani border from the end of October, which will spend several months there. The goal is to build trust. Turkish President Recep Tayyip Erdogan was also present there, who expressed all sorts of peacefulness, tried to get involved in confidence in Nikol Pashinyan.

He shook Erdogan's hand - clearly not in the position to enter into a direct clinch with Turkey. However, everyone remembers perfectly well that Turkey acted as a participant in the conflict, supplying Baku with weapons, providing intelligence. And in general, Turkey's position on the Karabakh issue does not cause much doubt among anyone: it cannot be considered a neutral side. 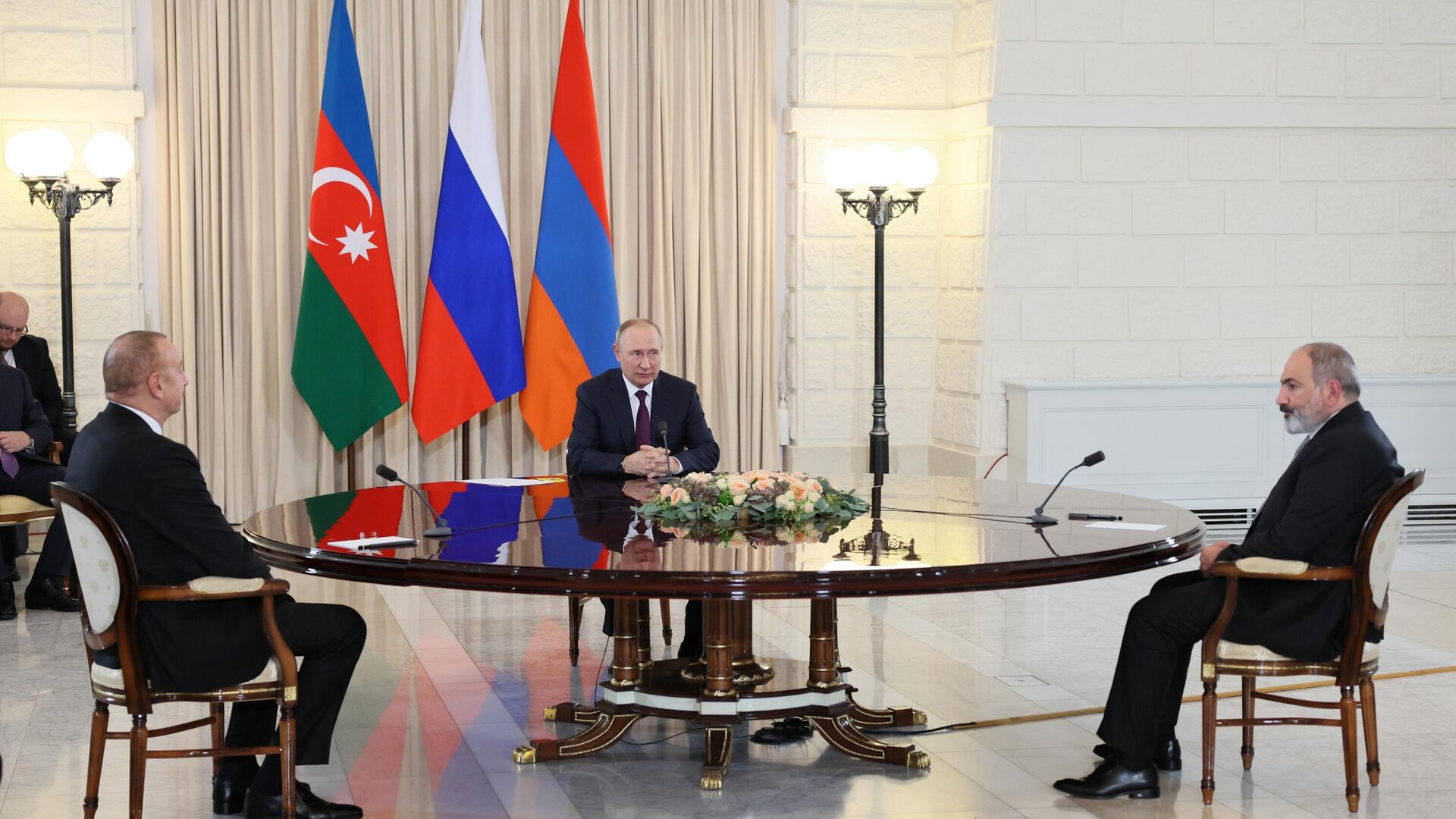 All this is just part of Recep Tayyip Erdogan's big game of promoting Turkish, and more broadly, pan-Turkist interests in the world. Transcaucasia they consider almost their backyard. In many ways, Aliyev's position on peaceful settlement is dictated by the support it has from Turkey, a NATO country. Including military.

So far, the parties refuse to comment on those points on which they could not agree. Vladimir Putin said that it is wrong to "stick out" these moments. This means that there is a real chance to agree - and Russia will definitely play its role in this, as it played a role in stopping the hot stage of the conflict in 2020.