Biden wanted to see Vladimir Putin. He got it. A further step towards, must be taken by the American side.

The meeting between Putin and Biden was held in the spirit of "agreed to negotiate," but there are important advances. And first of all - the preservation of the old and the creation of new channels of interaction to reduce international tension.

According to the European correspondent of The Moscow Post, a meeting between Russian and US Presidents Vladimir Putin and Joe Biden ended in Geneva. It was the first meeting of two politicians in the status of heads of state, and took place in an atmosphere of the worst relations between Moscow and Washington since Soviet times.

Given this, as well as the venue of the summit at Villa La Grange, many tried to compare the summit of the two leaders with the meeting of Mikhail Gorbachev and Ronald Reagan in 1985. But the context of the two meetings turned out to be completely different. The USSR is no longer there, and the Russian Federation is not a weakening power, ready to give up its national interests in response to empty promises.

At the same time, Moscow is under serious pressure from a number of Western states, secretly led by the United States. There is no eastern bloc for a long time, but here the context is different - for the first time in recent decades, the Russian Federation stands, having strong partnerships with China, a new geopolitical player whom Washington fears not less, but even more Russia.

And in this sense, Putin's hands were untied - they can put pressure on the Russian Federation, but the potential of the United States is simply not enough for destruction, only for deterrence. At the same time, all the mantras about Russia's isolation look ridiculous.

Earlier, The Moscow Post predicted that no breakthroughs should be expected from it, but it will still be a historical event. So it came out - there were no breakthroughs, but the dialogue was marked, and the meeting, as Putin assured, was excellent. And even more than that, experts talk about the trusting situation in the negotiations, which they hardly believe in.

In politics, even the major league, sign language, small signs are extremely important. The first thing the world saw was Joe Biden, the first to reach out to Vladimir Putin, and who said that meeting face to face is always positive. Negotiations continued first with a narrow composition, then with the head of the General Staff of the Russian Federation Valery Gerasimov (military issues), Deputy Prime Minister Dmitry Kozak (Ukrainian issue) and many other relevant officials.

Note that there was no joint press conference between Putin and Biden - politicians made statements to the press separately. Earlier, former Secretary of State under Donald Trump Maiko Pompeo called the US refusal to communicate with the press Biden's weakness. They say that he simply did not want to look faded against Putin's background and give food to the curveballs, as happened after the meeting of the Russian leader with the 45th US president in Helsinki. 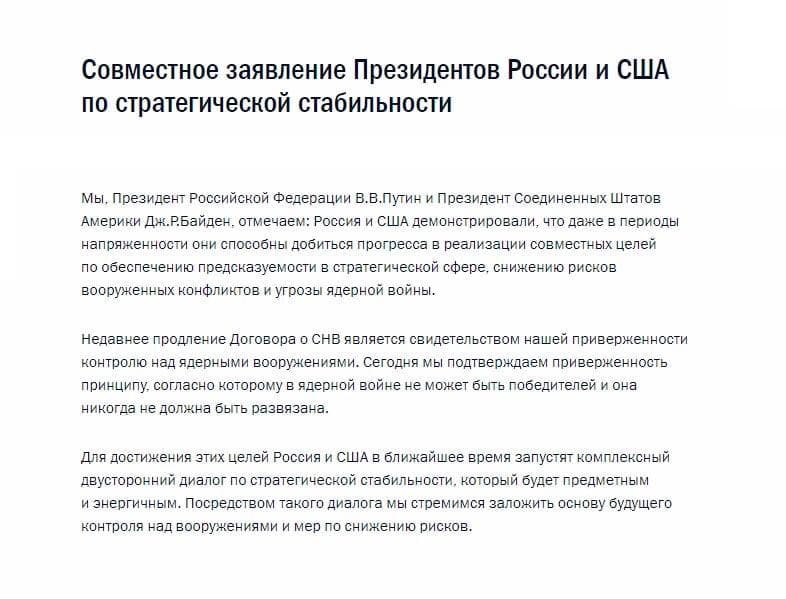 Meanwhile, the parties did not refuse the joint statement, which is a positive sign in itself. Although this is only a declaration, the wording is encouraging - a constructive dialogue has begun.

First of all, one of the most positive signs - the parties agreed on the mutual return of ambassadors to Moscow and Washington. Recall that the Russian ambassador Anatoly Antonov was recalled after Biden's insulting statement to Putin in the American press. But after that, Biden called and explained to Putin - Putin arranged his explanations. Antonov will return to Washington before the end of June - this was later announced by Deputy Foreign Minister Sergei Ryabkov.

In the dry rest: exactly what the experts of The Moscow Post predicted, and many other publications, were discussed. These are cybersecurity, international strategic stability, non-proliferation of weapons of mass destruction, bilateral relations, and regional conflicts. In addition, the Arctic became a separate topic.

For the United States, obviously, the main issues were arms limitation. The latest hypersonic weapons of the Russian Federation in the States "slept," so Biden previously spoke with both hands for SNV-3. It will operate until 2026, and right now, following the results of the summit, it was decided to start interdepartmental consultations on disarmament.

Translating from diplomatic to Russian is this topic in which common ground was found, and the heads of both countries instructed to continue work in this direction. More specifically, by possible extension and even deepening, it is SNV-3.

Moreover, the joint statement of the two presidents says that the Russian Federation and the United States will soon launch a comprehensive, substantive and energetic dialogue on strategic stability - that is, we are talking about a wider range of issues than simply extending START.

The issue of cybersecurity was extremely widely discussed. It is known that the American establishment constantly accuses Russia of cyber attacks on American infrastructure. Despite the lack of evidence, this thesis has long become a factor in intra-American politics.

This topic was supposed to be one of the most problematic due to the constant demands in the US Senate and Congress to punish the Russian Federation for mythical "attacks." But even here there were "advances" - it was decided to start consultations between the two countries on cybersecurity. That is, if earlier they refused to talk about this topic with the Russian Federation, now a new channel will be created for interaction on this issue.

"We believe that the sphere of cybersecurity is extremely important in the world in general, for the United States in particular, and for Russia in the same volume," the Russian President emphasized. He added that the parties should "discard insinuations" and work together in common interests at the expert level.

They were discussed, but were only briefly touched upon by Putin and the topics of a number of regional conflicts. In particular, President Biden, in an interview with Putin, confirmed that the United States considers it right for Ukraine to resolve the situation through the Minsk agreements.

That is, what the modern Ukrainian leadership would like to dissociate itself from. The topic of Ukraine's entry into NATO was practically not touched upon - after all, the meeting is "framework." The notorious red lines were not discussed either - the time for a deeper conversation did not come, and this topic is clearly not public.

Meanwhile, talk does not subside about a possible softening of Russia's position at the invitation of the United States as a participant in the settlement negotiations in the Donbass. If Ukraine itself does not want to fulfill the road to peace, the United States could help and "watch" it. True, in response, the United States will clearly want the Russian Federation not to deepen its strategic partnership with China, but Putin will never do this, as stated in a recent interview with NBC.

At the same time, it cannot be said that from the mouth of Putin and Biden, following the results of the meeting, "fir trees were poured." Everyone understands the conflict of our relations. Putin drew particular attention to this, saying that back in 2017, the United States recognized the Russian Federation as an enemy and began to support a number of organizations in the Russian Federation.

"If Russia is an enemy, what organizations will America support in Russia? I think not those that strengthen Russia, but those that restrain it... How should we relate to this?, "Putin asked a rhetorical question.

Farther from the edge of the abyss

Communication with Biden's press did not go radically against what Putin said. Biden placed his accents, clearly giving revivals to the anti-Russian part of the American establishment. The general tone of his speech did not get out of the context of all the events of recent weeks, when Washington clearly and openly went to soften the rhetoric against the Russian Federation and its leader.

In general, we agreed to negotiate. But under the current conditions, this is not bad, and this is an extremely positive signal to the whole world that no one is going to get to the edge of the nuclear abyss - there are no fools. 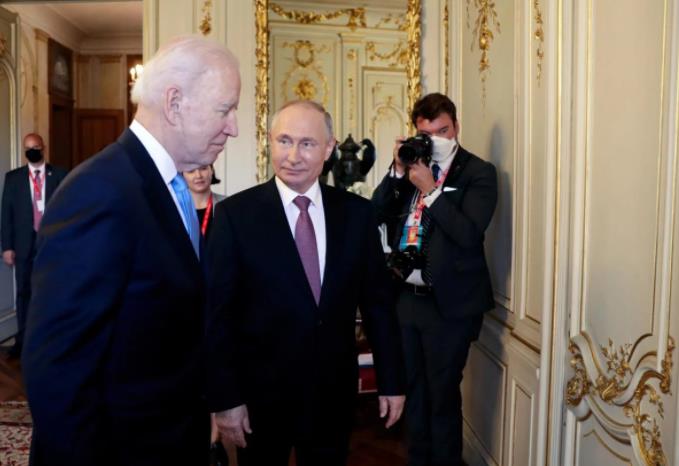 The meeting of the two leaders was encouraging, but did not exceed expectations

One thing is clear - if the parties have enough political will, and negotiations continue, concrete positive results will not be long in coming. Which does not give us the right to relax and consider the United States, say, a neutral state. But Russia clearly does not want to see her as an enemy - and it seems that the Biden administration is increasingly inclined to the same attitude to the Russian Federation.