Puns have a salary

Yablonsky so-called. Russian "liberals" have finally turned into extremists. In an attempt to curry favor with Russia's geopolitical opponents, the fugitive Russian "opposition" called for destabilization in our country.

Last week, the so-called "Congress of People's Deputies" was held in the Polish city of Yablonna, where representatives of the "opposition" who fled from Russia, and in fact, the criminals and collaborators wanted in the Russian Federation, decided how to "equip" our country after the end of the Ukrainian conflict.

As with whose money they are going to "equip Russia" - in the material of the correspondent of The Moscow Post.

The "Congress of People's Deputies" turned out to be as pretentious a dummy as almost all the actions and statements of the above personalities in recent years. There are many hysterics and arrogant words with the same essence: an attempt to legalize in the West, to justify their presence in places of stay with a fierce anti-Russian position.

The same Mr. Ponomarev (recognized as a foreign agent on the territory of the Russian Federation) seems to have nowhere else to go. Since 2015, a criminal case has been opened against him in Russia on complicity in the embezzlement of $750 thousand from the funds of the Skolkovo innovation fund.

By a court decision, he was arrested in absentia in this case in the same year. Later, after the start of the SVO, a case was opened against him to discredit the Russian Armed Forces: the former deputy spread deliberately false information, trying to play along with Ukrainian propaganda in its ugliest manifestations.

It is no secret that the ex-deputy settled in Kyiv, where, apparently, he was tightly hooked by the Ukrainian special services and their Western curators. Today, it, like other similar oppositionists, is used for purely practical purposes in the interests of the same intelligence services: as a "lever" for rocking the situation in Russia, where they still have sympathetic citizens.

Everything is also known about Gudkov. For a long time he was engaged in politics at Fair Russia, while owning a business, which the law "On the Status of a State Duma Deputy" does not allow. For which in 2012 he was shamefully deprived of his mandate. And then he moved to permanent residence in Bulgaria, where he probably stored the funds earned in the status of the people's choice.

Against this background, all the calls of such citizens to comply with the law, to impersonate law-abiding, but persecuted by the authorities of citizens look like outright hypocrisy. What they are. And there are very few people in the Russian Federation who are expected to be slandered by such characters in the Russian Federation - the electoral support of the "Apple conspirators" is at the level of statistical error.

Therefore, it is more profitable for the Western curator to collect them in one place, providing funding and creating the appearance of some kind of autonomy. Although everyone understands perfectly well that such anti-Russian activities are caused, first of all, by complete dependence on the host countries. It is necessary to work out - and in their case in the most vile and inappropriate way.

Criminal cases have been instituted against many other participants in the Polish event. However, it could be transatlantic, because few people doubt that the organization of funding flows for such gatherings goes through the same Western special services, where London and Washington play key roles.

The same foreign agent Ponomarev, recognized in the Russian Federation, sitting on the hook of the SBU, so wants to curry favor and knock out at least some prospects for himself in the future that he openly supports terrorist attacks on Russian territory. On his social networks, he actually approved the murder of the daughter of philosopher Alexander Dugin, Daria Dugina, calling on the radicals for new "exploits."

The Russian special services know that the organizer of the terrorist attack was the Ukrainian side. But Ponomarev, recognized in Russia as a foreign agent, played a fool, hanging responsibility for the murder on a non-existent underground in Russia, which is allegedly fighting the Russian authorities.

It seemed that there was nowhere to fall below, but the "Congress of People's Deputies" proved the opposite. Its participants, including the former US ambassador to Russia Michael McFaul (for many years oversees anti-Russian activities through the American special services), the Ukrainian people's deputy Alexei Goncharenko, who hates Russia, and many others openly called for a change in the political regime in the Russian Federation. In fact - to an armed coup, a change in the constitutional order, as well as foreign occupation of Russia.

The purpose of the event is designated "the creation of a legitimate center of power, which in the future will form a government of national unity and the Armed Forces of Free Russia." That is, in fact - parallel authorities. How it ended in the history of our country, do not remind.

The topics of discussion and documents were, in particular, armed resistance to the authorities, actual surrender to Ukraine (including territorial concessions and indemnities), the dissolution and re-establishment of the Russian Federation, self-determination of the peoples inhabiting Russia, lustration, etc. That is, they discussed the so desired collapse of Russia, the destruction of its statehood, the actual return of sovereignty.

Based on the frankly illegal, extremist orientation of the event, we can conclude that they do not intend to return to the country and really fight for power. Being a tool in the wrong hands, they could not boast of much legitimacy before, and now they have completely turned into frank freaks on the salary.

Most of them were elected to parliaments of different levels on lists, and not in single-member constituencies, where the "expression of the will of the people" did not have much chance of political success. What they, of course, declared carols, falsifications and other things.

By the way, in the West itself, the event and its participants were also treated, surprisingly, ambiguously. In a situation of growing confrontation, more pragmatic approaches to resolving the crisis are gradually being made than adopted today.

Against the background of the growth of economic and military risks, Western elites increasingly understand the utopianism of plans for the collapse of Russia, especially given the fairly high level of support for the SAO and the authorities operating in the Russian Federation by the population of Russia.

In this configuration, almost all the statements and approaches outlined in Yablonne look radical and utopian, they do not give anything from the point of view of real politics. However, if we take into account the same Polish authorities, it seems that they can already be denied adequacy.

Constant calls for a military strike on Russia, at least in the Kaliningrad region, an invitation to deploy NATO nuclear weapons on its territory - all this indicates the entry of the Polish ruling elite into a clearly inadequate state of consciousness.

But the "Congress" did not have the task of developing any real political position in relation to the Russian Federation and its policy. The task was completely different: acting on the instructions of Western curators, to try to influence a small radicalized part of Russian society, as well as those, mainly, young people who managed to dust their brains with fairy tales about the Beautiful Russia of the future and other frankly false, propaganda narratives. 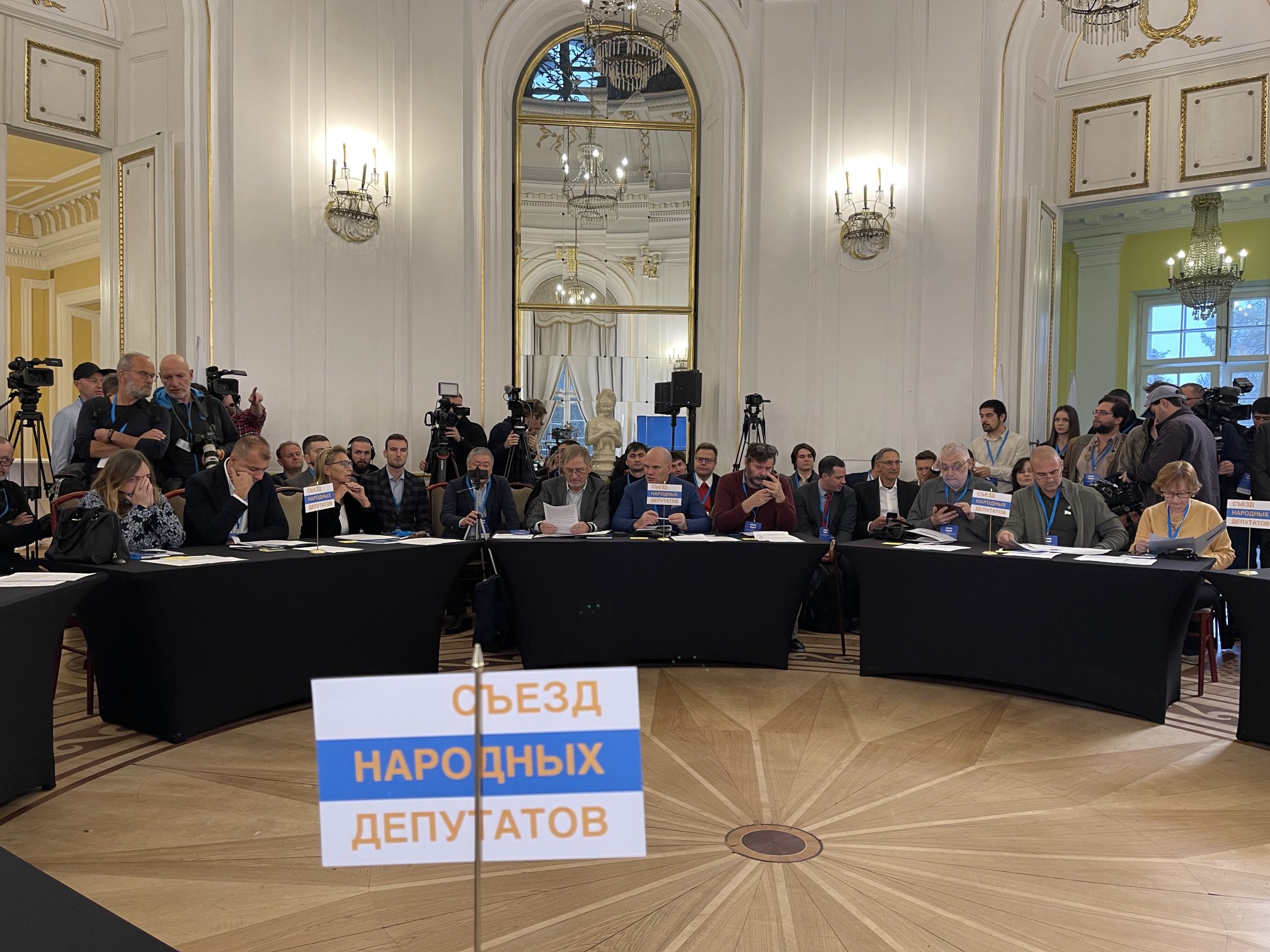 And now Ponomarev, already recognized as a foreign agent in the Russian Federation, takes on the burden of curating propaganda, openly hostile information resources to Russia, calls for terrorist attacks on our territory.

In fact, this is an organization of terrorist activities. Moreover, it is also directed against the less radical Russian opposition, which continues its activities in the Russian Federation. Surprisingly, some politicians operating in Russia also took part in the gathering.

This puts an end to the possibilities of dialogue with them within the legal field. Any connection with the proposed program deprives them of the remnants of political prospects in the Russian Federation, moreover, if illegal activities continue, it threatens with prison terms. In this sense, they further discredited themselves - although much more.