Pashinyan is looking for a way out

The situation in Armenia will continue to be "rocked" both inside and outside. Rumours about Pashinyan's resignation and a new round of war are beneficial to cynical politicians on both sides of the line.

According to the correspondent of The Moscow Post, the Armenian Defense Ministry officially announced that the Azerbaijani army has again launched an offensive in the South of Nagorno-Karabakh. Allegedly, their goal is the village of Hin Tagher and Khtsaberd in the territory of Hadrut region.

The latter came under the control of Azerbaijan in accordance with the armistice agreement. These villages are enclaves of Armenia on this territory - the public of the winning side demanded to get them. There are no comments from the Russian peacekeeping mission yet - it is quite possible that this is a provocation, part of an information war.

Even if this information is not confirmed by the monitoring mission, Azerbaijan will not be able to achieve success. But it is much more interesting from which side this possible provocation comes. In the case of Azerbaijan, we can talk about dizziness from success. Aliyev became a national hero at Homeland, but many considered his victory to be not full. The presence of Russian peacekeepers and the strengthening of the Russian Federation in Transcaucasia irritates Turkey.

But the issue of continuing the war is much more important for those forces in Armenia that would like to come to power against the background of the failure of Prime Minister Nikol Pashinyan's policy. Almost simultaneously with the announcement of Azerbaijan's offensive, there appeared information about his resignation. It has spread so quickly that it looks like a targeted campaign to "wobble the chair" of the Prime Minister.

Rumours about Pashinyan's resignation have already been denied by his press Secretary Mané Gevorgyan. Nevertheless, the information once again "warmed up" Pashinyan's detractors protesting against the peace agreement in Armenia - yesterday they again took to the streets and demanded that the Head of Government resign.

According to our sources, representatives of the American Embassy in Yerevan may be behind the spread of rumours about the Azerbaijani offensive, or at least their rapid dissemination to the target audience. Pashinyan came in the wake of the velvet revolution, and was considered a pro-Western politician. However, the events of autumn 2020 harshly returned him to the geopolitical realities - it became impossible to pursue an anti-Russian policy.

Pashinyan 2018 and Pashinyan 2020 are different people. The longer Pashinyan like this stays in power, the more influence Russia will have in the country and the region. Pashinyan understands that he retained the remnants of Karabakh and remained in power only because Russia allowed it. Another politician could turn the chessboard with a lost party, and plunge Armenia and the region into a new crisis together with it.

Whatever Pashinyan is a Pro-Western politician, this is well understood in Moscow. Vladimir Putin clearly does not want a new bloodshed with the redistribution of spheres of influence. Taking this into account, the Russian President acts not only nobly, but also wisely, as if protecting Pashinyan in the face of his own radicals. In November, he called baseless accusations of treachery towards Pashinyan, expressed, as strange as it may sound, by the Armenian Pro-Western opposition.

"The accusations in his (Pashinyan) address about some kind of betrayal do not have any basis", - said Putin. He explained that Pashinyan, considering the proposed condition for the return of refugees to the city of Shusha for a ceasefire in Nagorno-Karabakh as "a threat to the interests of Armenia and Karabakh", told him that "we cannot do this, we will fight, we will struggle". The President's words are quoted by RIA Novosti.

Pashinyan's departure right now and the resumption of the hot stage of the war would inevitably strengthen Turkey, ruled by Recep Tayyip Erdoğan. Meanwhile, Pashinyan and his team saw a real price for the promises and assurances of Western partners. It is no secret that Yerevan asked for support not only from Russia within the CSTO (it was impossible to provide it legally, because Artsakh is an internationally recognized territory of Azerbaijan). Armenia's envoys asked for support in both Brussels and Washington.

Instead of real aid, weapons and sanctions against Azerbaijan and Turkey, they received only a friendly "pat on the shoulder". France was the only country that openly expressed moral support for Armenia. And then only because the vast Armenian diaspora of the country categorically demanded it.

What concerns Erdoğan's Turkey, it has been and remains the beneficiary of a possible continuation of the conflict. Similar to the representatives of Baku, Turkey has a sense of "stolen" or incomplete victory - it has not been able to bring its peacekeepers to the line of demarcation. It has to be content with only participating in the work of the monitoring centre. 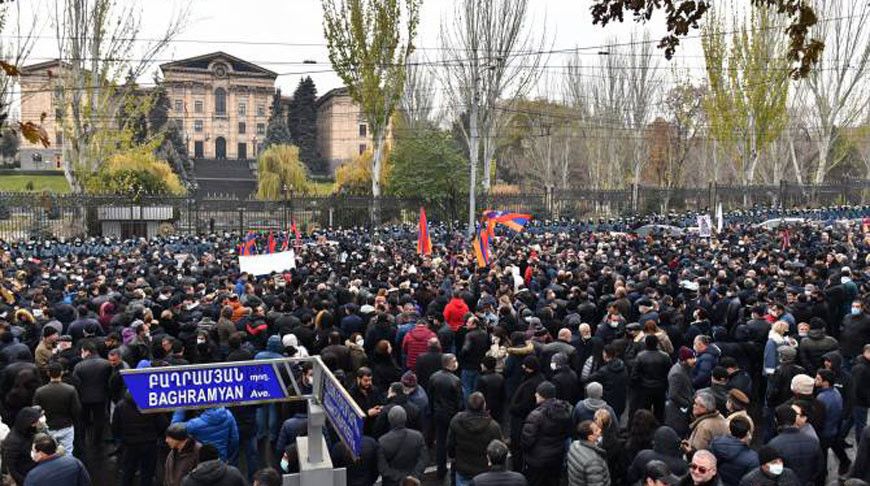 Rallies for Pashinyan’s resignation keep gathering crowds of people. His weakness is used by politicians both inside and outside the country

Last week, Baku hosted a military parade dedicated to the victory in the new "Patriotic war" of the Republic. This is what Azerbaijan now calls the result of new clashes in Artsakh. The Turkish President and his wife were the guest of honour of Aliyev. At the parade, among other equipment, they demonstrated the latest attack drones that brought the allies success. The entire Turkish establishment would like to repeat this success and expand it.

The reasons for this can easily be found. Provocation on the line of demarcation, and even simple rumours about the resumption of hostilities can blow up the situation in a matter of hours. Apologists of the war understand this not only in Ankara and Baku, but also in Yerevan. For those who rely on Western embassies and grant funds for "developing democracy", after the agreement of November 10, military provocation remains the only chance to shake the situation.

The current President of Armenia Armen Sarkissian could be among them. The government in Armenia today is a fish in muddy water that many people want to catch. Against the background of the current situation, Sarkissian called for early parliamentary elections, and before them to transfer power to the Government of National Accord.

It is easy to assume that Sarkissian is not a real Westerner, and uses the situation only to score political points. Since both he and any other leader, having achieved Pashinyan's resignation, will have to look for ways to compromise, especially with Russia, which gives at least some security guarantees. Otherwise, it will not be possible to stay in power in Armenia for a long time now.