Nikol Pashinyan's time as Prime Minister of Armenia is almost gone. But now, when the civil confrontation is again in a hot phase, there is still no understanding who will replace him, and who will benefit from this.

According to the correspondent of The Moscow Post, representatives of the Armenian opposition, which unites 16 political parties of the country, began an unauthorized rally on Yerevan's Republic square, where the residence of Prime Minister Nikol Pashinyan is located. The main demand remains the same - the resignation of the Prime Minister, but for the first time, protesters pitched tents in the main square of the country and issued an ultimatum.

According to people who came to the square, the entire government should resign together with Pashinyan. Russia is watching carefully the events in Armenia. They concern it directly, because Armenia is an ally of the Russian Federation in the CSTO, and the reason for the protests was the peace agreement on Nagorno-Karabakh, where Russia acted as a mediator and peacemaker.

In fact, Russia has been hit with unconstructive criticism from everywhere. Part of the Azerbaijani society believes that the Russian Federation did not allow their country to achieve a complete victory over the enemy, capturing, among other things, Stepanakert. In Armenia, the radicals are convinced that it was Moscow that persuaded the "traitor" Pashinyan to "surrender" national interests.

Is Sargsyan waiting for a "revanche"?

Nikol Pashinyan came to power in the wake of the velvet revolution in 2018, leaving former Prime Minister Serzh Sargsyan out of business with the help of the street. It is the latter who is considered the main beneficiary of the ongoing protests, but does Russia, the main guarantor of its security, need changes in Armenia and the destabilization of the political situation in this country?

Even then, many people said that Pashinyan was a man of George Soros. Conditionally, of course, but the main thing here is to focus not on national interests, but on what "western partners" will say. As a result of its orientation towards the West, and indeed towards anyone except for own forces, Pashinyan's Armenian leadership has proved weak both in the domestic and foreign arena.

It should not be forgotten that one of the first actions of the protesters in Armenia after the November 10 agreement on Karabakh was the destruction of the office of the Soros Foundation in the centre of Yerevan. Interfax wrote about this, and the actions of people were similar to barbaric. But what kind of rejection must happen, how could the national interest be so badly surrendered in just two years (since 2018) that the crowd literally dismantled the office for spare parts?

Returning to the protesters, yesterday the representative of the Dashnaktsutyun party Ishkhan Saghatelyan said that the Head of the Government will be removed from office at an extraordinary meeting of the National Assembly - unless, of course, he decides to resign on his own. It is not necessary to expect this from Pashinyan, so the "show" will go on. 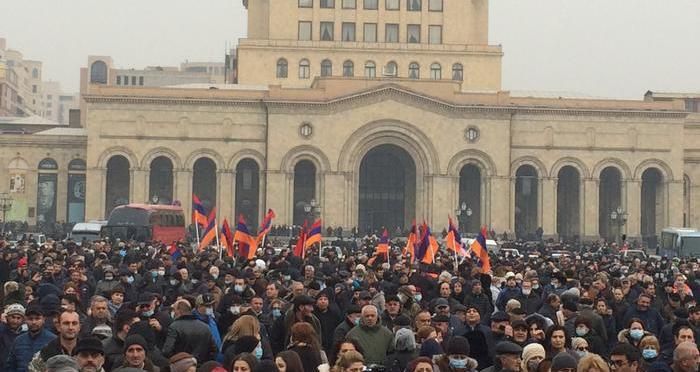 Did not manage to stop the discontent of the people, thousands of residents of Armenia do not leave, waiting for the resignation of the Prime Minister

In response, the Head of the Armenian Prime Minister's office, Eduard Aghajanyan, promised to "prevent criminal elements from seizing power" and "apply all measures provided for by law." His words are quoted  by RIA FAN. That is, the confrontation is about to turn into a hot phase, when force will be used against the protesters again, as it was in the first days after the signing of the Nagorno-Karabakh agreement.

The same Nikol Pashinyan, who assured everyone of his "westernism" and democracy, once in front of a discontented crowd, refuses to resign, and his supporter threatens "measures provided by law." Returning to the figure of Serzh Sargsyan, it is impossible to imagine a better option for him.

Moreover, for the overthrow of Sargsyan himself in 2018, it took only a couple of thousand extras and a picture on TV. But not only, after all Pashinyan was actively supported by western countries, primarily Europe and the United States. Why has it all stopped?

Two factors: Russia and the power block. Russia has already indicated its support for Nikol Pashinyan. Earlier, President Putin called the accusations of betrayal against Pashinyan baseless. He told how Pashinyan fought for Karabakh and did not want to retreat even in a difficult situation on the battlefield. His words are quoted by RIA Novosti.

The Russian President does not say anything without a reason. And here it is important to understand that this support, although there is, is more nominal. It refers not to the figure of Pashinyan himself, but to the desire to prevent political chaos and uncertainty. At least, to encourage the hotheads in Armenia to wait for the elections, as it happens in civilized countries.

The second point is the power block inside Armenia itself. Pashinyan remains Prime Minister due to the fact that, despite everything that has happened, the security forces have not yet turned away from him. And that's weird. As RIA FAN writes, Pashinyan dismissed many security officials who were loyal to the country and to him personally.

In particular, he dismissed four people from the leadership of the security services, as well as most of the generals who had experience in fighting against Azerbaijan. He also got rid of most of the politicians with this background, and the people who replaced them were incompetent. There is an opinion that the security forces are also in no hurry to "throw off" Pashinyan, fearing a new chaos and colour revolution. Here their statist positions coincide with the position of Russia.

Returning to Serzh Sargsyan and the former government in general, which is considered the only real alternative to Pashinyan's power. Moscow has no problems with Sargsyan, it only wants to prevent chaos. But support can be received not by Sargsyan himself personally, but by people from his circle. According to the authors of the website, either Mikayel Minasyan (son-in-law of the third President Serzh Sargsyan) or Robert Kocharyan (the second President of Armenia) can be moved to the position of Prime Minister.

Oligarchs did not help

The nuances of the political tactics of Pashinyan's opponents are already clear. The pressure will not only be on Soros and the military defeat of Armenia - the key things that destroyed almost all of Pashinyan's support. But also to use the classic theme of greed and friendship with oligarchs for dumping corrupt officials.

From the very beginning, Nikol Pashinyan was associated with the richest man in Armenia, the oligarch Gagik Tsarukyan. He has consistently denied these accusations, but in the spring of 2020, he was personally a guest at the wedding of Tsarukyan's daughter with the son of another influential oligarch, Khachatur Sukiasyan.

Personally congratulating the newlyweds, he presented their parents with a bill according to which Iranian cement was subject to additional duties, and this created a favourable environment for Gagik Tsarukyan's largest cement plant.

The union of relatives of the Prime Minister's family and oligarchs who suddenly became "respectable entrepreneurs" make themselves felt in the criminal chronicle. According to the authors of the 168am portal, allegedly the name of Anna Hakobyan's brother appears in the sensational scandal with 40 tons of contraband cigarette products, which were transported by plane and were arrested by Russian law enforcement officers.

Where are all these people today, what kind of support, at least moral, did they provide to Pashinyan? The latter turned out to be a fighter against corruption only in words, but he did not find support from the oligarchs, as we can see. After Pashinyan's departure, Russia will again have to study the configuration of the business and political interests of the oligarchy in Armenia, because the relations between the two countries in the business sphere are of crucial importance for the Armenian economy.

Summarizing the above - there are obstacles for Nikol Pashinyan almost everywhere. Western embassies, oligarchs, his own supporters, and most importantly - the people turned away from him. The only one who did not "kick" Pashinyan in this situation is Putin. But this is done only because the destabilization of the situation is not profitable for Russia. However, this is a situational maneuver, because whoever comes to Pashinyan's place - Serzh Sargsyan or other persons, the Prime Minister himself seems to have long been written off "for scrap" and can only discuss the conditions of personal political surrender.